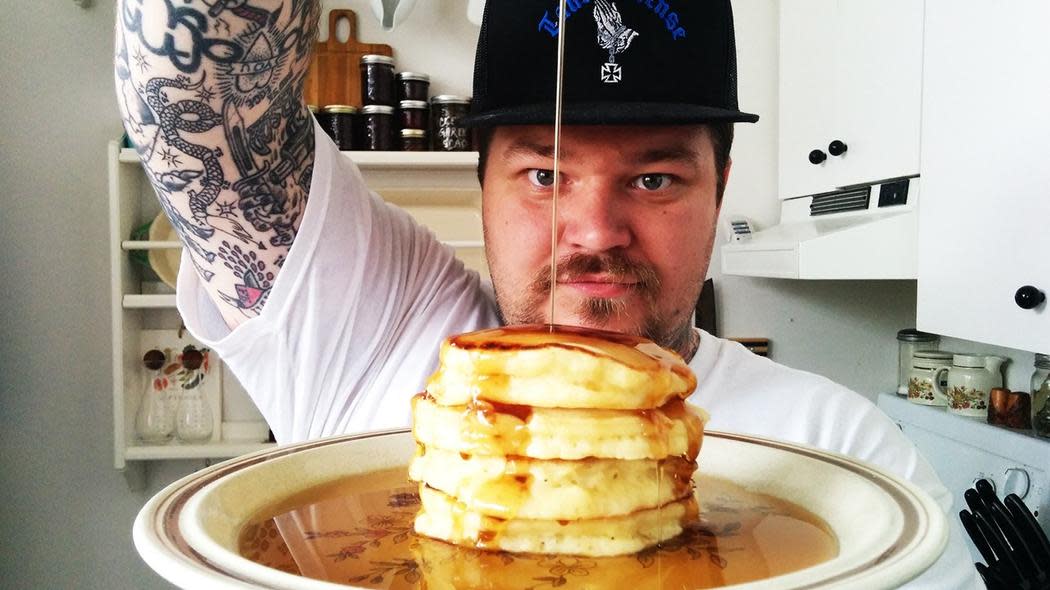 Chef Matty Matheson curates The Review and shares his feelings on film, food, and Forrest Gump

I love a movie that’s two-and-a-half-hours long. A romantic, ‘90s-adventure type of film. Like, I love Legends of the Fall and A River Runs Through It. I’ll watch Braveheart every time it’s on TV. I grew up watching Steel Magnolias because my mom loved that movie. Forrest Gump was on TV the other day, and I literally watched it twice in a row; my wife thought I was insane. I can’t help it. Every time I watch the part where Forrest finds out that he has a son, it breaks my heart.

My son Mac is 13 months old now, and he’s starting to pay attention to movies. Having a son doesn’t change the way I watch movies, but it has made me soft. I was watching Slumdog Millionaire recently; there’s a part where they take the kids and make them blind and it just crippled me. It wasn’t slobbering-crying, but I was getting teary. And I’m one of those dudes who doesn’t cry. 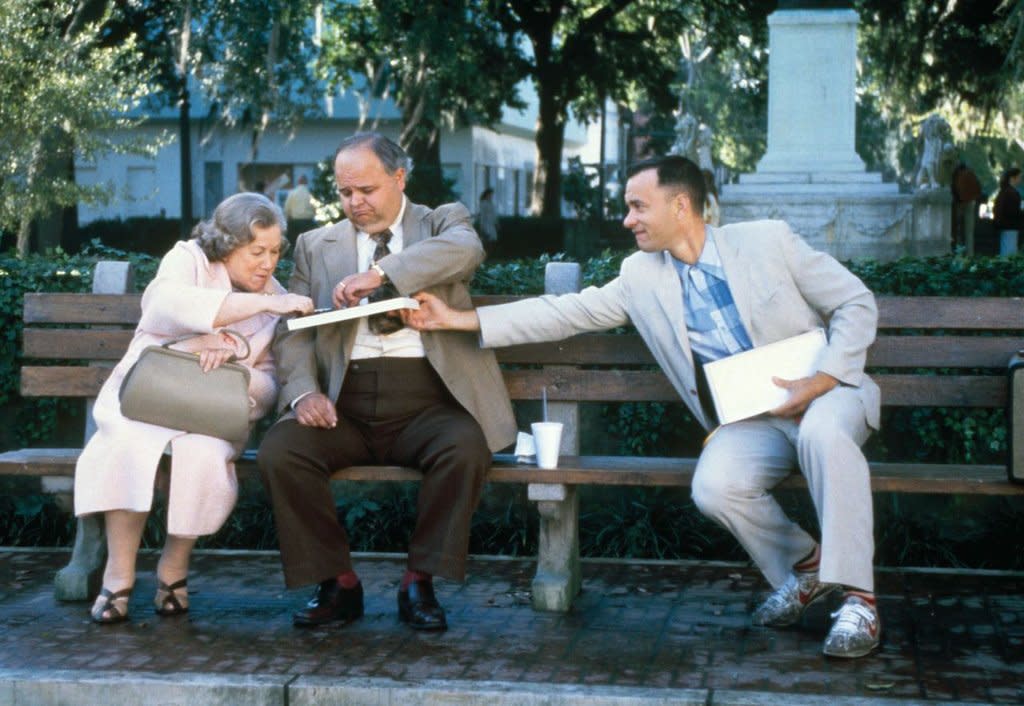 There’s this independent film called Joe the King, about this 14-year-old boy. Val Kilmer plays his dad who’s the janitor at his school; it’s just a no-win situation. Any movie about Stand by Me stuff — a childhood coming-of-age where you see the kids fighting for themselves, trying to stand up against adults — always gets me going. Since Mac was born, I guess I’m just a little more vulnerable.

I want to show him all the films I grew up with: He-Man: Masters of the Universe, G.I. Joe: The Movie, The Princess Bride. (I don’t know if he’ll like them, maybe they'll seem super dated.) I find my memories of food are very similar. You have these moments, these feelings, these tastes — anything can trigger them. I’ll walk into a place, smell some mothballs, see some wood panelling, and go, “This looks like my grandparent’s basement.”

I’m lucky, because my grandfather lived in the back of his restaurant, which was a diner on Prince Edward Island. I have memories of opening his apartment door and seeing the craziness in the kitchen. We would get yelled at because kitchens are dangerous and you don’t want your grandchildren walking around. We would beg to sleep in the booths and have to wake up at 5:30 in the morning because they’d open up at 7am for the truckers on the highway. Every time I drink chocolate milk, I remember how my grandfather had one of those milk-dispenser things with the little white nozzles. We’d sneak over and try to steal little cups of chocolate milk. I have all kinds of nostalgia with that stuff.

It’s those little details, like the milkshake they bring you with the extra shake left over in the stainless steel container. Why don't you just put less in the glass? I never understood that. I love that when you say “diner,” everyone knows what you’re talking about. It’s a club sandwich, with extra mayonnaise in a little paper cup. (I'd always ask for four of those cups.)

When I was in high school, living in Fort Erie, we used to go this place called Hy’s Steakhouse. It’s not there anymore, but we used to hang out at Hy’s because our friend Steve worked there — Ice Man. Diners are the training ground before you can get into bars. They’re a place to goof around with buddies. You’re too loud, so you get kicked out almost as soon as you go in. One friend buys a french fry, four dudes just order a soda, and you hang out for four hours. Maybe you kiss your first girlfriend, or try smoking cigarettes. One friend has a fake ID, so you get caught drinking beers. They’re the meeting point where everybody’s gonna link up.

These places are important and they're disappearing in Toronto. I don't want to go to Fran's, which has become a weird, corporate idea of what a diner is. I want my mashed potatoes scooped with the ice cream scoop. I want that so bad. Like, I get bummed if I go to a place and my mashed potatoes aren't scooped! When I go to a diner, I’ll definitely roll the dice. I’ll get a liver and onions if it’s on the menu. I’m a huge sucker for a cream of tomato soup with a BLT. Sometimes, if you’re really lucky, you’ll go to a place and they’ll have minute steaks, or a flash-fried pork chop, with a little slice of homemade pie. That’s the best.

There’s a guy wearing a tuxedo who just came from some smarmy party, he's eating a cheeseburger at midnight. The diner is the perfect restaurant because you’re selling good food that makes you feel good and anyone can afford it. It’s the level playing field, the restaurant for everyone, and you just can’t beat that.

My grandfather's restaurant was the same. He made his own buns and breads every day, every single thing came from scratch. You could get a full turkey or steak dinner there for less than $20; on Sundays families would go there after church, or fisherman who just got off work unloading lobsters. I think those places don't really exist anymore, or they're few and far between.

You can escape, eating a meal in a restaurant, the same way you can escape with a movie. When you think about it, they can take about the same amount of time — just enough to forget about your day. There’s a beginning, middle, and an end. You write your menu as best you can, which will gradually bring a person to that climactic moment and gently release them back into the world. With movies, well, I don’t think there are too many sticky floors anymore, but you’ve got your popcorn, your soda, maybe some Milk Duds or M&Ms. You get to spend an hour-and-a-half not even talking to somebody; you can just watch. Inside a restaurant, you’re watching this play take place around you. I think there’s a very strong connection between restaurants and movies because people want to dream and they want to feel.

My TV show on VICE is called Dead Set on Life. Over the past 25 years, chefs have become celebrities by telling their stories publicly. There's an enigma about chefs. Either you’re a crazy, drug-addict psycho chef like myself — as clichéd as that is, with my tattoos and everything that I've done — or the proper, elegant chef. I think people want to see that kind of grit because, until now, chefs never really had a voice. They were always these labourers behind closed doors. Now, the chef has taken the spotlight and it’s our job to let you know what the fuck’s going on with our industry. It's a very serious thing because people need to be aware of what they're eating.

I don’t really watch myself on TV anymore because it makes my skin crawl. But I want people to watch my show and enjoy the half hour. It’s not too heavy, it’s funny, there’s some information, there’s some food. I get to meet cool people. We always end on a high note because I want it to be about winning and people being successful in the things they do.

So, what kind of movie is that? It’s Tom Hanks. He’s the serious funnyman, but he’s still got his edge. I’m the Forrest Gump of TV chefs — I’ve got a bit of braces on my legs, but I still keep running.

— As told to Chandler Levack

Matty Matheson, host of VICE’s Dead Set on Life and the Executive Chef at Parts & Labour, will introduce American Graffiti on Wednesday, May 10 at TIFF Bell Lightbox. This is the first installment of the 2017 edition of TIFF’s Food on Film series, which continues with experimental vocalist Tanya Tagaq and Chef Susur Lee in late May and June. The series brings chefs, food experts, and film lovers together to enjoy the best in culinary cinema and thoughtful conversations about the central role food plays in our culture.