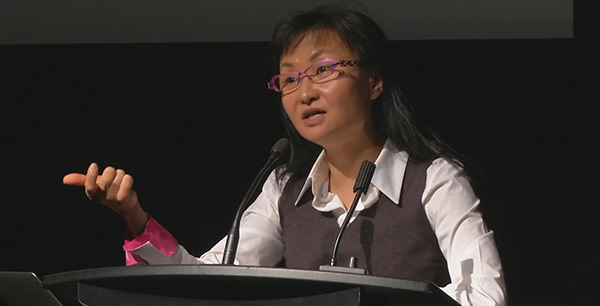 Media theorist Wendy Chun explored how technologies matter most not when they are new, but once their use becomes habitual

Media theorist Wendy Chun joined post-secondary students and faculty to speak about her book Updating to Remain the Same: Habitual New Media, in which she argues that technologies matter most not when they are new, but once their use becomes habitual. Chun explored how online behaviour can be characterized as big data and how individual habits create nuanced perceptions of public and private spaces. Other discussion points included notions of virality when defining networks, disruptions as a driving force behind technological updates, and the breadth of information available — not through what we disclose, but by how we behave.

Wendy Hui Kyong Chun is a professor and Chair of Modern Culture and Media at Brown University. She is the author of Control and Freedom: Power and Paranoia in the Age of Fiber Optics and Programmed Visions: Software and Memory. Chun co-edited a special issue of Camera Obscura entitled Race and/as Technology with Lynne Joyrich as well as New Media, Old Media: A History and Theory Reader, 2nd edition with Anna Fisher and Thomas Keenan.

This Higher Learning event was held on May 11, 2016 at TIFF Bell Lightbox. It was co-presented with York University's Department of Visual Art & Art History as part of its 2016 Joan and Martin Goldfarb Summer Institute, SLOWNESS, NOT SEDATION, in collaboration with the Department of Cinema & Media Arts in York's School of the Arts, Media, Performance & Design.