Before the House of Mouse cornered the market in filmic fairy tales, the silent screen was full of fantasy 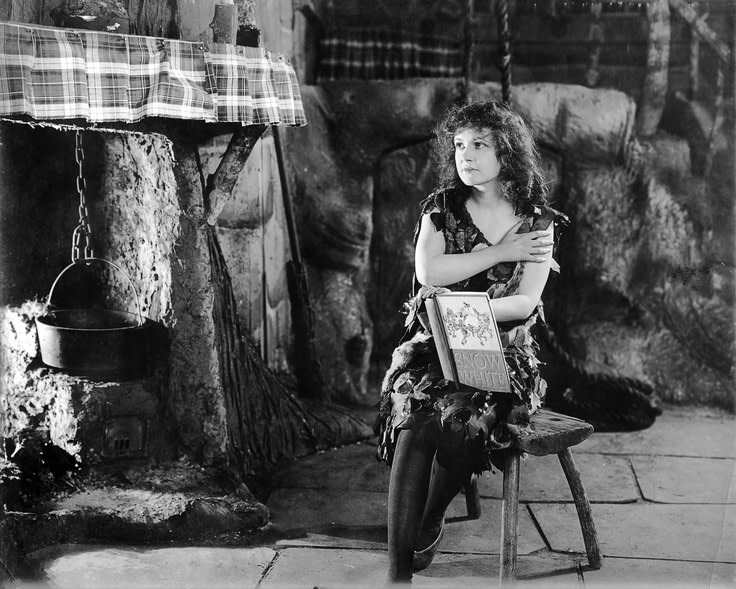 In January 1917, The Kansas City Star sponsored five free screenings of J. Searle Dawley’s cinematic adaptation of the popular theatrical production of Snow White (starring Marguerite Clark, who at the time was considered a rival to Mary Pickford) at the city’s convention hall as a reward for its newsboys. The event got a little out of control when 67,000 newsies showed up at the 12,000-capacity venue, which necessitated that the exhibitors project the film simultaneously on all four walls of the hall — creating a-proto 360-degree cinema — in order to accommodate the overwhelming crowd.

At a time when feature-length cinematic narratives were still fairly new attractions, this massive turnout was indicative of just how sensationally popular Dawley’s Snow White was — and this screening would prove to have an immense influence on film history, as one of the newsboys who attended the screening that day was a 15-year-old Walt Disney. Writing to a colleague in the late 1930s, Disney declared that “my impression of [Dawley’s] picture has stayed with me through the years, and I know it played a big part in selecting Snow White for my first feature production.” 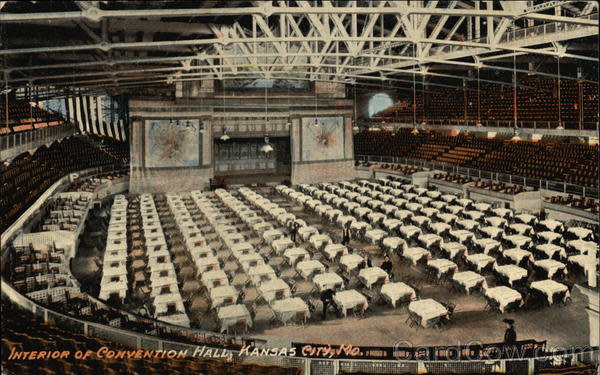 While Disney would go on to effectively dominate the genre of the filmic fairy tale when he released Snow White and the Seven Dwarfs in 1937, this testimonial reveals just how much his famous animated films owed to their silent-cinema forebears. As conveniently rights-free, highly recognizable properties that would resonate with international audiences, fairy tales and fables were frequent fodder for adaptation to the silent screen, and they inspired future filmmakers such as Disney with their elaborate production design, groundbreaking special effects, and the promise of the magical and wondrous that defined the appeal of the motion picture in the early years of the medium. 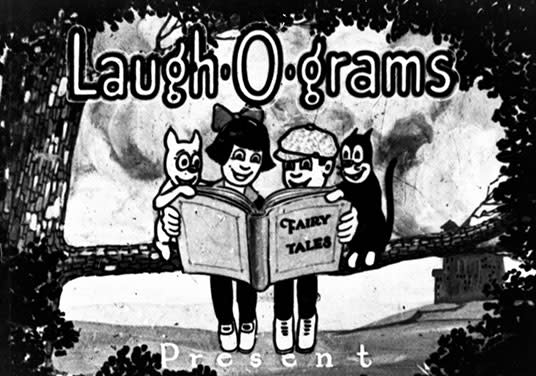 Title card from one of Disney's Laugh-O-Grams productions, 1922

Disney would align his name with fairy tales and fables from the very beginning of his career as an animator in the early 1920s, when, after floundering as a commercial cartoonist in Kansas City, he established the Laugh-O-Gram Studio. Taking inspiration from the popular Aesop’s Fables adaptations being produced as part of his competitor Paul Terry’s Terrytoons series, Disney spent six months producing Little Red Riding Hood, his first attempt at animated storytelling; Puss in Boots and Jack the Giant Killer, as well as several other films which transposed Brothers Grimm fables to modern, Jazz Age settings, soon followed.

While the Laugh-O-Grams garnered some brand recognition for Disney, the films never realized profits. With bankruptcy looming, Disney looked to another popular fantasist for salvation—this time, a property considerably more contemporary than the works of the Brothers Grimm.

Lewis Carroll’s Alice’s Adventures in Wonderland had been a popular source for motion-picture adaptation since the very beginning of filmic storytelling. The first screen version, a 1903 British one-reeler by Cecil Hepworth and Percy Stow — starring 13-year-old May Clark as Alice, Hepworth’s wife Margaret (who wrote several scenarios for Hepworth’s pioneering films) as both the Queen of Hearts and the White Rabbit, and featuring a cameo from Hepworth himself as a frog footman — attracted admiring notices for its special effects and art direction, which took direct inspiration from Sir John Tenniel’s original 1865 illustrations for Alice. An American version, directed by W.W. Young and released by the American Film Manufacturing Company’s Flying A Studio, followed in 1915, and by the dawn of the following decade Alice was a familiar presence on American screens.

Looking for a surefire moneyspinner, Disney decided to modernize Carroll’s beloved creation with his series of contemporary Alice comedies produced for M.J. Winkler. Initially starring the cherubic five-year-old actress Virginia Davis (who was followed by a bevy of subsequent young Alices), the Alice comedies spanned more than 50 episodes between 1923 and 1927, and their success made Disney’s name and brought financial stability to the new incarnation of his studio. Twenty-five years later, Disney would of course return to Carroll for his celebrated animated version, Alice in Wonderland. 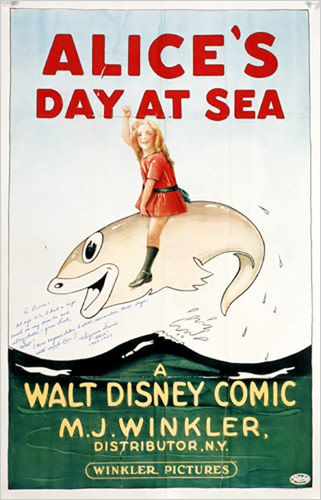 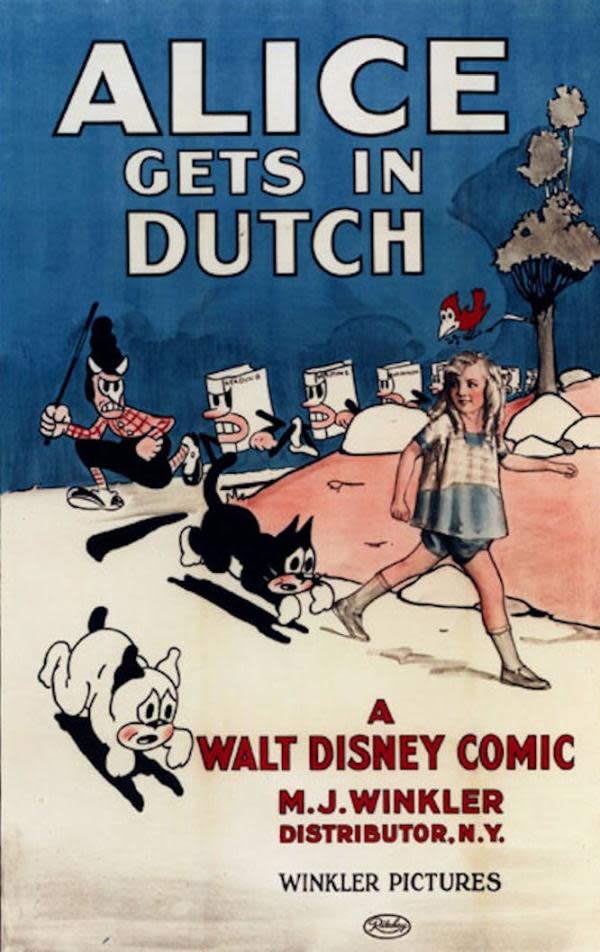 As Disney’s fortunes rebounded, films based on popular works of fantasy continued to prove immensely popular at the box office. J.M. Barrie’s Peter Pan — who first appeared in Barrie’s 1904 play Peter Pan, or The Boy Who Wouldn’t Grow Up, and went on to become a transatlantic sensation after the author’s 1911 novelization of the story — made his debut on the big screen with an authorized 1924 adaptation directed by Herbert Brenon for Paramount. 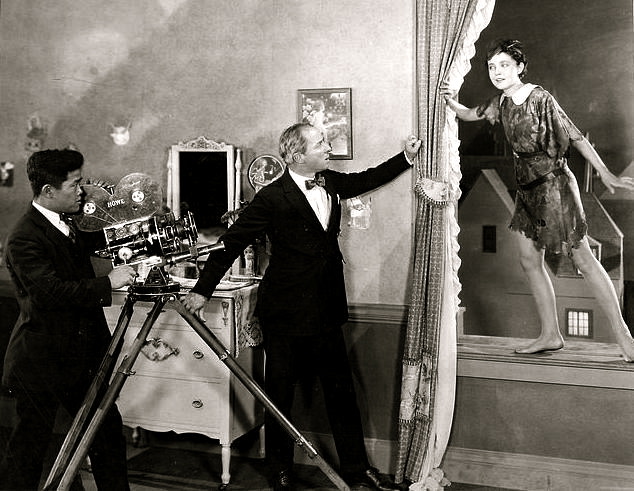 Sticking close to Barrie’s original stage play, Brenon’s Peter Pan was a box-office sensation whose revolutionary special effects hugely influenced fantasy films to come. Betty Bronson, the 18-year-old actress personally selected by Barrie (she beat out both Mary Pickford and Gloria Swanson for the role), established many of the performance tropes that would characterize future Pans, and inaugurated the tradition of Peter being played by a woman. The film also featured the one and only film appearance of George Ali, a vaudeville and music-hall star famed for his animal impersonations and puppetry skills, who played both the Darling children’s faithful dog Nana and Neverland’s menacing crocodile. 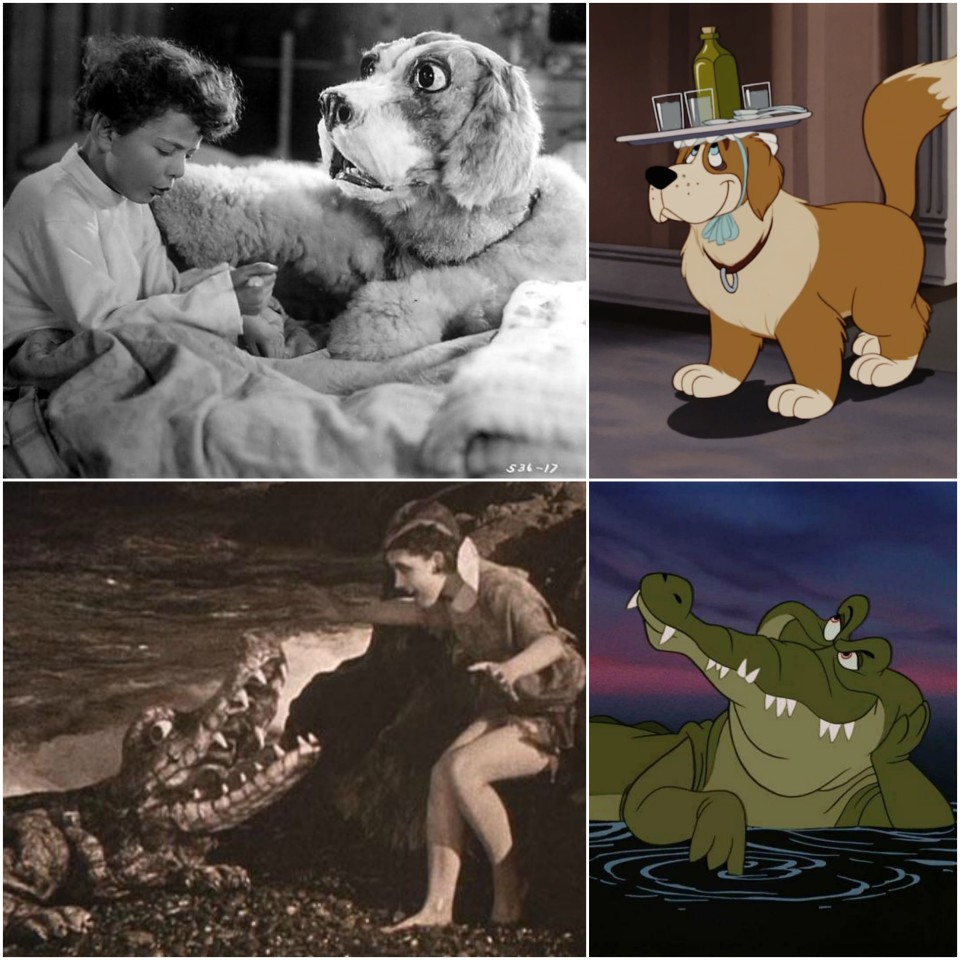 When Disney set about mounting his animated Peter Pan in 1953, he drew much inspiration from the 1924 silent version for the film’s art direction, and even directly replicated a scene that Brenon added to the film which did not appear in Barrie’s original play: an adorable comic sequence in which Nana the dog feeds the Darling children their medicine before bedtime.

Unfortunately, Disney also faithfully adhered to some of the 1924 film’s more questionable elements. For the role of Tiger Lily, Brenon had cast Chinese-American actress Anna May Wong; in his animated version, Disney amplified this offhanded racism through broad, buffoonish caricatures of First Peoples. (Even post-Pocahontas, the modern-day Disney still seems to have not learned its lesson: its live-action 2015 Pan featured Rooney Mara as Tiger Lily, sparking protests about the studio’s persistent whitewashing of its princesses.)

A year after Brenon’s box-office success with Peter Pan, the director released another entry in the fairy-tale genre, again adapting a beloved J.M. Barrie stage production: A Kiss for Cinderella, the author’s version of the Charles Perrault classic. 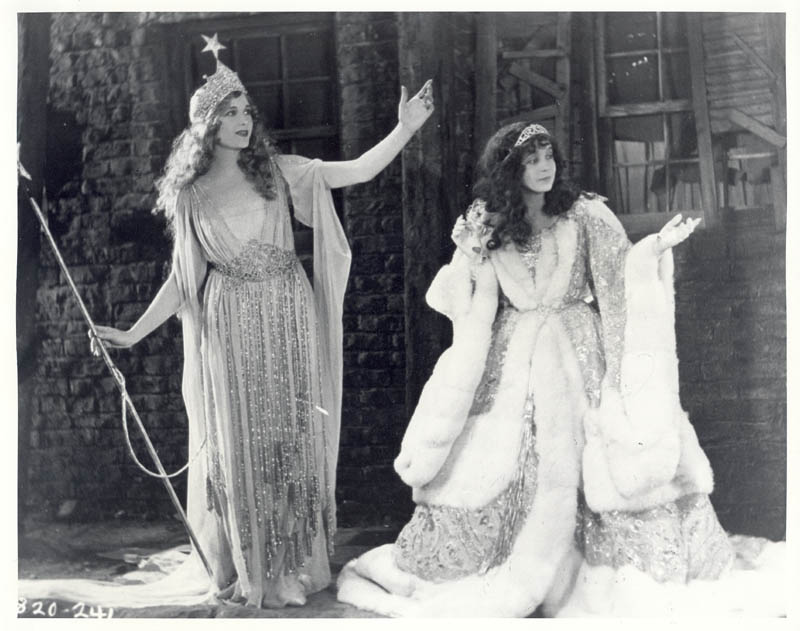 Unlike Pan, Perrault’s tale of the girl with the glass slipper had already enjoyed a lengthy screen career. Magician turned motion-picture impresario Georges Méliès produced Cinderellon for his Star Film company in 1899, which became his first international success and launched his further ventures into the féerie genre. Two decades later, the great animation pioneer Lotte Reiniger produced a wondrous short version of Cinderella in 1922, utilizing the cut-out silhouette technique that she would later apply to her milestone feature-length animated film The Adventures of Prince Achmed.

Again starring Betty Bronson in the title role, as well as her Peter Pan co-star Esther Ralston (who had played the Darling matriarch) as the Fairy Godmother, A Kiss for Cinderella was another great success for Paramount — and, like its predecessor, its imagery and special effects exerted a great influence on Disney when he came to make his version of the much-told tale in 1950. 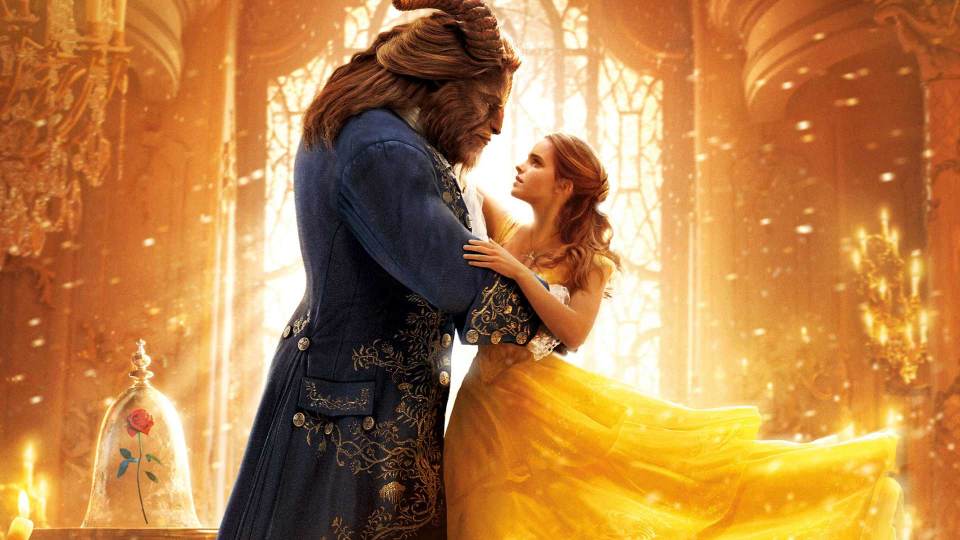 Even as Disney himself readily acknowledged the importance of silent-cinema fairy tales to his own fantastically popular versions, his relentless self-branding also helped ensure that that heritage was eclipsed in the public eye. No longer part of a historical continuum, the Disney fairy-tale films became sui generis properties of the House of Mouse, and effectively replaced the authors of the original sources and the tales’ previous interpreters with the beaming, all-pervasive countenance of Uncle Walt. (Even when the company did delve into the historical roots of its fairy-tale films, they managed to further obfuscate those origins: a 1987 TV special celebrating the 50th anniversary of Snow White and the Seven Dwarfs showed clips from another, lesser-known 1916 version of the story directed by Charles Weston, rather than the J. Searle Dawley version that had so powerfully influenced the studio’s founder.)

At a time when Disney is further expanding its colonization of the fairy-tale terrain by producing live-action versions of its animated fantasy hits, it’s worth remembering that our collective cultural imagination is not the property of any one corporate entity. Bursting with invention and wit and high on the fantastic possibilities of a still-young medium, silent-era fairy tales offer their own unique magic kingdoms to discover and explore.