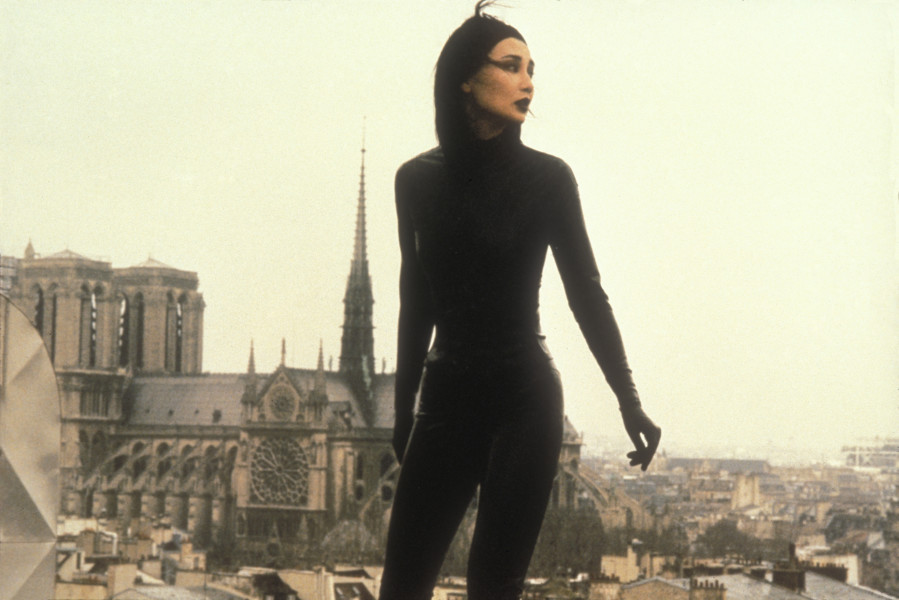 __From June 22 to August 17, TIFF makes it way through the diverging visions of Olivier Assayas in a career-length retrospective. This week, the director will be on hand to personally introduce his films Cold Water and Clean, as well as Robert Bresson's Le Diable probablement, and Gérard Blain's Le Pélican on June 23 and 24, with many other classics and rarieties to follow. Weighing in on his 1996 film-within-a-film Irma Vep, Montreal filmmaker Mark Slutsky (who is also a current member of TIFF Studio) describes the feeling of re-encountering a movie that feels like a former version of yourself. You can catch Irma Vep on Saturday, June 24, as part of TIFF's ongoing series Something in the Air: The Cinema of Olivier Assayas. __

Olivier Assayas arrived at TIFF 16 with two films, one new and one 20-years-old. His newest work is Personal Shopper, which won him the “Best Director” prize at Cannes. It’s also the director’s second collaboration with star Kristen Stewart after 2014’s sublime Swiss-set Juliette Binoche two-hander Clouds of Sils Maria. Personal Shopper is something new for Assayas: a ghost story, although the French director always seems to be doing something new. Throughout his career he’s made a five-hour epic about the life of the 1970's most prominent terrorist (Carlos), a espionage thriller about anime porn (demonlover), and a tender, Musée D’Orsay-produced reflection on a childhood memory (Summer Hours). Connecting all his disparate works is a keen intelligence and sense of curiosity — his films are all undeniably Olivier Assayas productions — and really great taste in music.

The 20-year-old Assayas film Irma Vep is one that I’ve spent quite a few years obsessing over. It’s a film that I’ve watched over and over again in many different settings, starting in my 20s. Written and directed by Olivier Assayas, its loose narrative is centered by René Vidal, a fading, once-great French director, presumably of the New Wave era (the painfully perfect casting: Jean-Pierre Léaud). He’s hired by a broadcaster to direct a remake of Louis Feuillade’s 1915 silent underworld serial Les Vampires.

Having seen her in a Johnnie To action movie at a cinema in Marrakech, Vidal hires Hong Kong star Maggie Cheung (the kind of “playing herself role” we take for granted now, but at the time, felt startling) to play Irma Vep, the series’ enigmatic, anagrammatic (“Irma Vep” = “Vampire”) heroine. Cheung arrives amidst the chaos of the movie’s production office. (Everyone in the crew feels very realistically pissed-off — Assayas perfectly recreates the low-level current of hostility that permeates any doomed film production.) She’s put together with Zoe (Nathalie Richard), the art director, who develops a crush on her and takes her around Paris and to dinner parties on her motor scooter. They shoot a few days. Everything goes wrong. Vidal eventually has a breakdown and is replaced. Cheung, bewildered, ends up flying to the States for a meeting with Ridley Scott.

That’s about it in terms of plot, but in Irma Vep’s texture and feeling, there are endless depths. Re-watching it for the first time in probably decades, I had the pleasant, rare experience of discovering that a film that I loved not only held up, but was actually far richer than I’d remembered. Perhaps it’s because Irma Vep is the most movie of movies. It’s a film obsessed with film history and identity — French cinema in particular, but American and Hong Kong movies too. In an era where Chinese box office receipts were as important to Hollywood as American ones, Assayas’ anxieties feel utterly prescient. Take a scene where Cheung is interviewed by an enthusiastic French journalist who gleefully proclaims the death of “intellectual film.” He rhapsodizes about Jackie Chan, John Woo, and his “gunfights-like ballet.” (Antoine Basler, who plays the interviewer, is credited simply, hilariously as “journaliste qui aime John Woo.”)

It feels like everyone in Irma Vep, if they’re not making movies, is talking about them, even when the action leaves the set entirely. In one scene, Cheung dons her Irma Vep costume (explicitly based on a magazine photo of Michelle Pfeiffer as Catwoman in Batman Returns) and sneaks into a stranger’s hotel room. It’s there where she eavesdrops on a naked woman (played by Arsinée Khanjian!) on the phone with a lover who has kept her waiting: “I don’t know a single soul and I’ve seen every fucking movie in town,” she complains. “And that includes a Steven Seagal movie!”

The whole damn movie is constantly in dialogue with other films. We see clips old and new, the context coloured by the characters watching them. Vidal watches a crappy VHS of the Cheung-starring Heroic Trio, as he tries to explain his casting to the patient actress. At a dinner party, friends watch scenes from the very post-1968 Classe de lutte, a film by the Medvedkine group, a Marxist collective. (Chris Marker was a member!) They jadedly discuss its, and their own, relevance. The footage is of workers at film editing stations where a superimposed title reads: “Cinema is not magic: it is a technique and a science.”

There is the footage of the film-within-a-film Les Vampires itself, which we first see as silent black-and-white rushes watched by an increasingly tense crew. It then erupts into an argument as the crew zig-zags off on their scooters into the Paris night. Finally, in Irma Vep’s Lettrist-inspired conclusion, we see this footage again, beautifully transformed. (I won’t say any more, but it’s a sublime finale.) 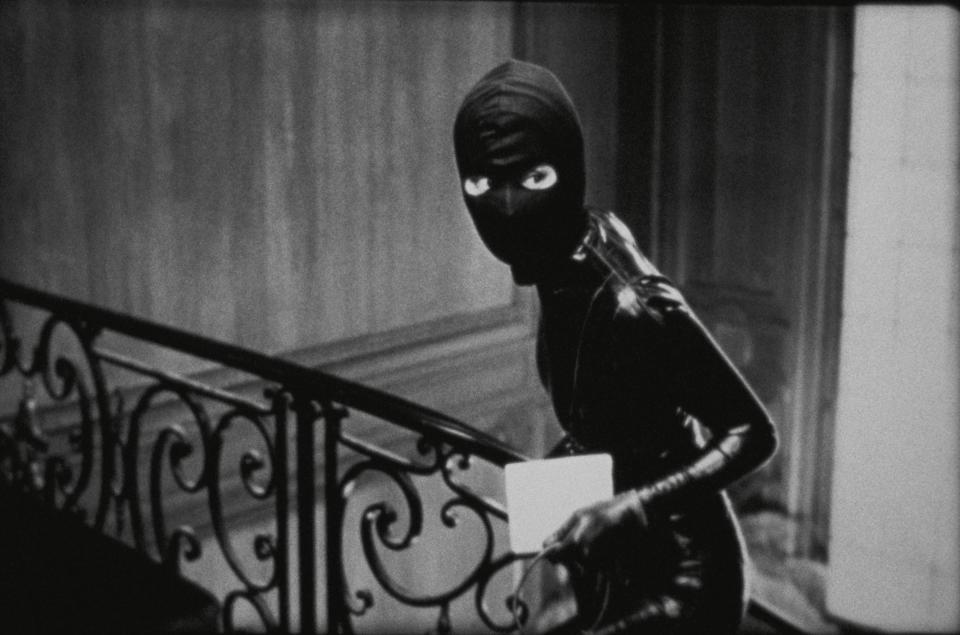 Cinema is a universal, if often poorly-translated language in Irma Vep, and so is English. None of the characters appear to speak it well, but out of necessity to communicate with Cheung, it’s their lingua franca. Every conversation with her in the room is infused with the sort of strained politeness of people carefully speaking a second language. And even when the characters speak in their native French, the communication is strained, at cross-purposes. Everybody bickers and undermines each other.

Everything about this dizzy mess appealed to me when I was in the depths of my first infatuation with Irma Vep. Now, watching it again, I saw something else. For the first time, I really noticed the strange movements of Assayas’ and cinematographer Eric Gautier’s camera. In sinuous, probing shots, characters drift in and out of focus, pushing their way in and out of the frame, as if simulating the rhythms and chaos of a film set, a crowded office, or a messy life.

I’ve always been fascinated with movies that hum with a constant movement of people and bodies, messy and overlapping. Like everything is happening at once and we’re only catching a hint of a larger, human system. In Irma Vep, there’s a sense of energy less focused on individual action than a sort of emergent, collective activity — kind of like a film set. I see this in movies like Lucrecia Martel’s The Holy Girl, or Daniel Burman’s recent The Tenth Man, in Altman movies like California Split, or The Player, which came out four years before. (Irma Vep’s opening scene, in that crowded, messy production office, shares a dialogue with The Player’s own famous opening tracking shot through a studio lot.)

That sense of jostling, harmonious crowdedness is something that always thrills me, whether I encounter it in films, or in real life. (I have. Once in a ‘50s-era hotel on the Big Island of Hawaii, and once in a Buddhist temple in Guangzhou). And that may be what hooked me into the film unwittingly when I first encountered it.

But it could be simpler than that. Everything the characters do in the movie is basically all I wanted to do when I first saw it — hang out, eat, drink, smoke, and argue about movies. To listen to Ali Farka Touré and Luna covering Serge Gainsbourg and Sonic Youth (the movie has a perfect late ‘90s time-capsule soundtrack).

I was a confused, film-obsessed mess back then, and all I ever really did was hang out. Rediscovering Irma Vep feels like rediscovering an earlier, looser version of myself. It’s nice to get re-acquainted.

Mark Slutsky is a filmmaker and a writer in Montreal. His short film Never Happened premiered at TIFF 15.

The Normalization of Kristen Stewart