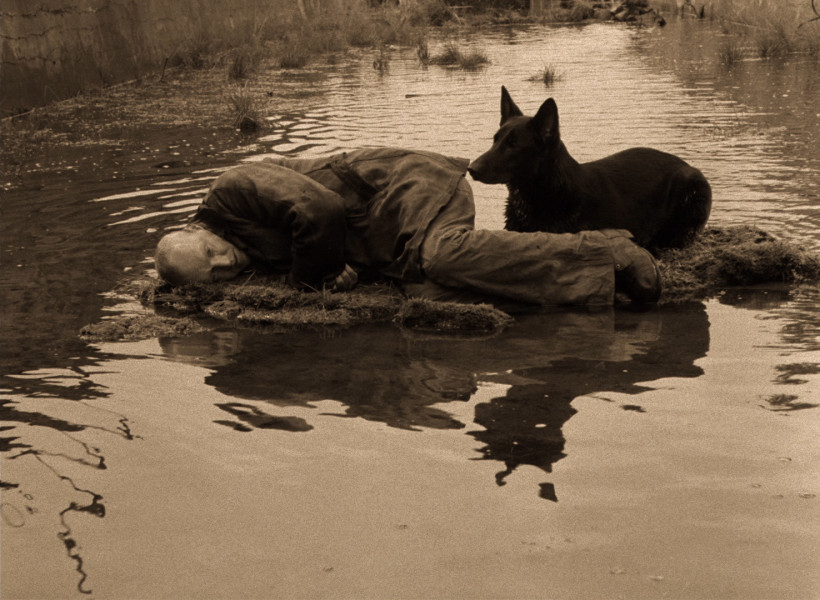 Stalker and three other Tarkovsky classics screen this season as part of TIFF Cinematheque Special Screenings.

In early 2017 I went to see Atomic Blonde, Hollywood’s latest attempt to revive the thriller genre via Cold War nostalgia. Adapted from Antony Johnston’s graphic novel The Coldest City and set in Berlin in the days before the Wall came down, Atomic Blonde struck me as low-grade fare; the barely coherent plot provides little excuse for the comic-book violence and exploitative sex scenes. Released exactly 75 years after the first controlled nuclear reaction, the film has absolutely nothing to do with the nuclear arms race or nuclear power, so its evocative title remains a hollow promise. The 1980s soundtrack is enjoyable, but its mash-up of styles and moments is profoundly disorienting for anyone who actually endured the decade in its splendid entirety. (Were we really still listening to Nena’s “99 Luftballons” in 1989? Certainly not if we were still listening to “London Calling”!)

But Atomic Blonde was quite unexpectedly redeemed for me when the heroine, played by Charlize Theron, ducks into a movie palace on Alexanderplatz as she tries to give the baddies the slip. I laughed out loud when I saw that the theatre was plastered with posters advertising Andrei Tarkovsky’s Stalker — another anachronism, to be sure, but what a welcome one! Theron’s character soon finds herself in a martial-arts fight right in front of the theatre screen, on which we see the Stalker and his two companions sitting glumly on the threshold of the wish-fulfilling Room at the centre of the Zone.

Tarkovsky is certainly not a pariah in Hollywood — recent films like The Revenant (2015) have explicitly referenced him in their widescreen, long-take realism — but, assuming that Stalker’s appearance in Atomic Blonde is not merely some deft product-placement by Kino International (which is distributing the new restoration and reissue of the film), I still wonder what to make of the prominent presence of this most Tarkovskian of all Tarkovsky films in a movie that is so different from it in every single way. 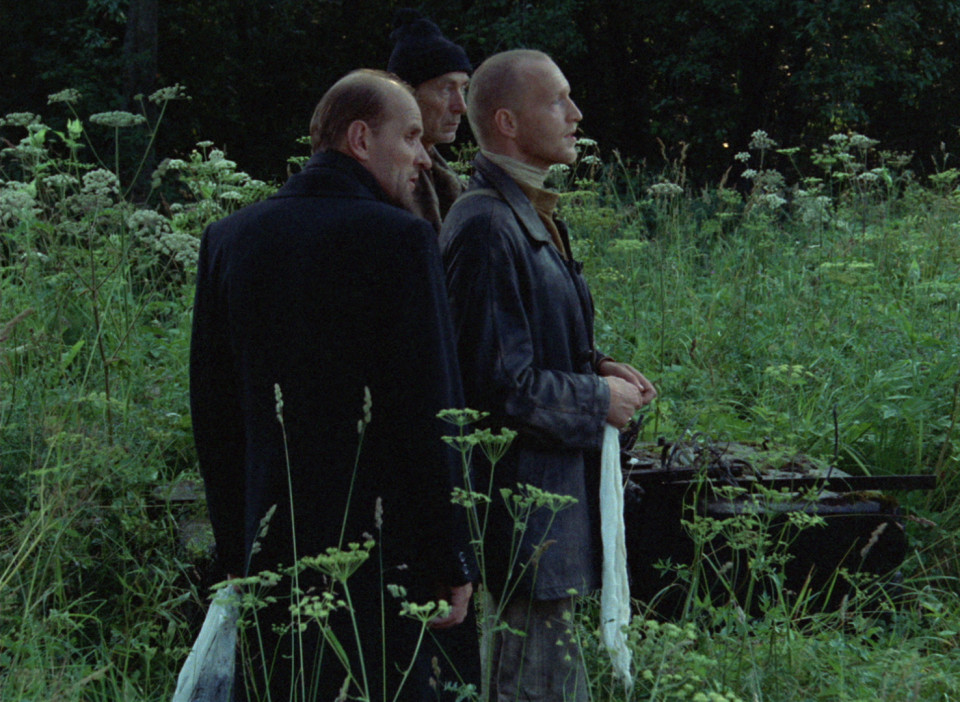 First to mind are the resonances of the verdant, deserted Zone, which is inhabited or haunted by a mysterious and malevolent presence. The temple-like Room at its centre grants pilgrims their most cherished desire, but as the Stalker and his two companions consider entering it, they wonder whether this would be such a good thing; one of them, in fact, is intent on destroying the room with a small nuclear bomb. 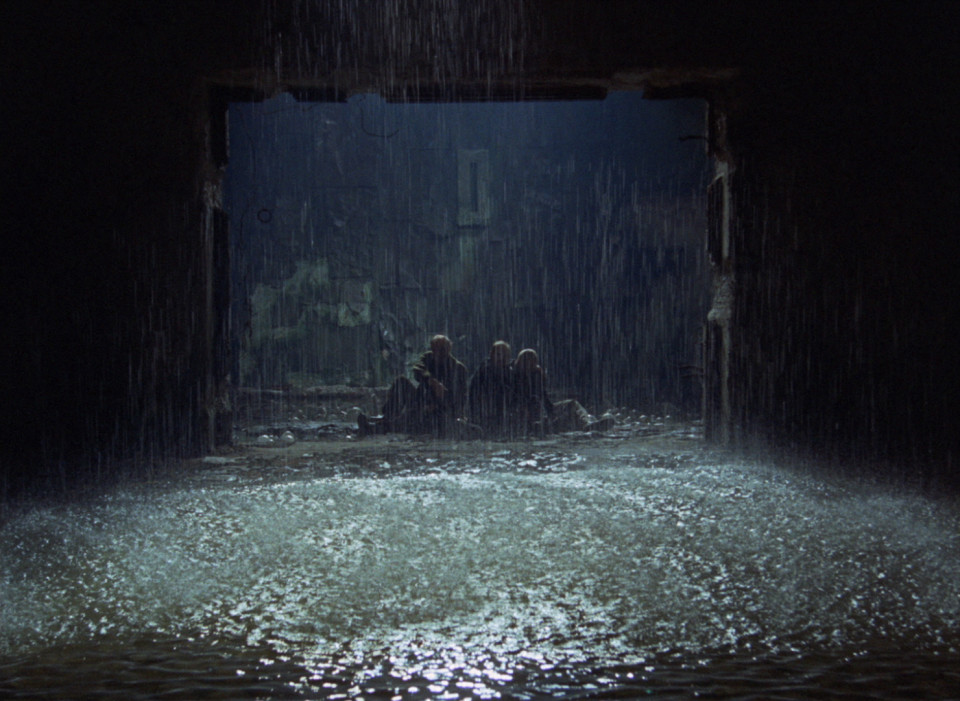 According to the novel on which Stalker is based (Roadside Picnic by Arkadii and Boris Strugatsky), the Zone is the site of an alien visitation, its power caused by a kind of residual radiation, like the trash left behind from a roadside picnic. Perhaps the Zone is an allegory for the fear of nuclear contamination, or of ecological catastrophe; in Eastern Europe, the word “Zone” could also denote many other kinds of enclosed space: a prison camp, the closed area where Party elites live, foreign territory to which Soviet citizens were rarely allowed to travel.

For Raymond Bellour, the Zone is an image in which dream is indistinguishable from memory; for Slavoj Žižek, it is ultimately “the material presence, the Real of an absolute Otherness incompatible with the rules and laws of our universe.” All of this would describe the passage between the two Berlins, so it is understandable that Atomic Blonde might want to activate Stalker’s sense of a forbidden, closed-off space that makes one confront one’s deepest desires and fears. But it could have used any number of other films to do so: it has been noted that Stalker follows the general scheme of The Wizard of Oz, which itself replicates a common plot in folk tales. Maybe the Zone is simply the cinema itself, a locus of experience formed of inquisitive human gazes and an uncannily impersonal machine gaze — the place one goes to see one’s innermost desires fulfilled, but only vicariously.

So perhaps Atomic Blonde is less interested in evoking Stalker’s poetics of space than in contemplating a different, slower telling of its own story. Soviet visual culture generally was antithetical to its Western counterpart: not objectifying women, not advertising commercial products or promoting consumerism, encouraging the virtue of endurance rather than distraction. (This is another anachronism: no Eastern Bloc film would have been supported with an advertising campaign like that granted Stalker in Atomic Blonde, even if the film was a new release, which Stalker wasn’t in 1989.) Atomic Blonde typifies a mode of filmmaking for which the relentless drive towards a spectacular ending causes profound indifference to the details of how we get there — by which I mean not only the proliferating anachronisms, but also the profound lack of narrative, characterological and historical logic. By bringing this frenetic, end-driven temporality into the same space as Tarkovsky’s meandering, meditative, open-ended film, by bringing the manic blonde spy into contact with a film audience fully absorbed in Tarkovsky’s inner dramas, Atomic Blonde undermines itself as spectacle. It is a kind of reversal of Nuri Ceylan Bilge’s Distant, in which the two protagonists are shown watching Stalker on TV at home; when one leaves the room, the other quickly switches over to pornography. Just as Atomic Blonde uses Stalker to signal its own vapidity, so Distant appropriates it to confess its self-righteousness.

But beyond instrumentalizing Stalker as a cultural signifier, these films testify to a suspicion that Stalker has somehow superseded itself, become something more than just a film. Surely, as was put to me recently, Stalker has eclipsed Andrei Rublev as the film by which Tarkovsky is best known. The legend of Stalker has been fed by several books (one by popular writer Geoff Dyer), at least two documentary films, and a number of stunning art projects, including Susan Hiller’s Psi-Girls (1999) and Jeremy Millar’s Ajapeegel (2008); it even spawned a popular series of video games called S.T.A.L.K.E.R. 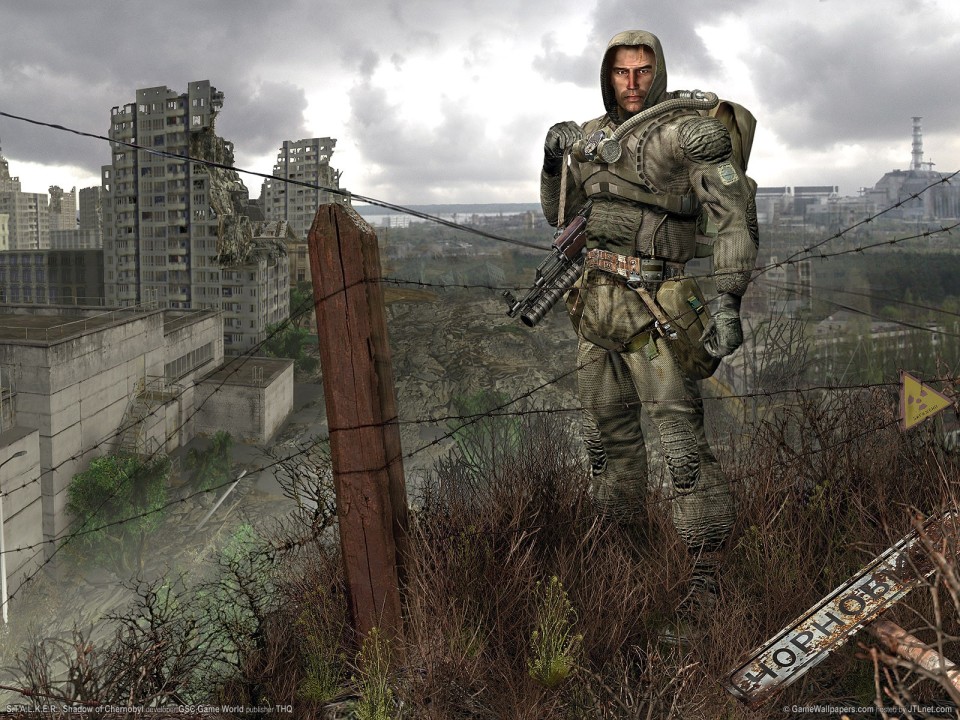 This cult of Stalker began in the USSR in the years after the film’s completion and limited release, when Stalker was the closest Soviet culture came to a punk aesthetic. In the early 1990s, during my early trips to post-Soviet Russia, I would sometimes encounter a man named Gosha, who had worked as a grip on Stalker. The special aura he possessed thanks to his proximity to this sacred film quickly faded for me as I worked out that he was a hopeless junkie and thus a thoroughly unreliable source; what was clear, however, was that this single, possibly short-term job had defined his entire identity.

In subsequent years, as I began publishing on Tarkovsky, I encountered several more members of Tarkovsky’s team on Stalker, each of whom has been glad to regale me with stories of his role in the production. In Chicago I met Grigorii Verkhovskii, who back in the day had worked as a still photographer and gopher on the second shoot of Stalker. At a conference on Tarkovsky I met Evgenii Tsymbal, who was sharing his memories of working as Tarkovsky’s assistant director on the same shoot. In June 2013, Evgenii invited me to another Tarkovsky conference in Ivanovo, Russia, where I met the Estonian Arvo Iho, who had helped out on the shoot and taken surreptitious photographs. Verkhovskii and Tsymbal have both made films about Stalker; Iho has published a book. For all of them, Stalker represents a peak of their professional lives. It’s almost as if they made it into the Zone and their most secret desire has been fulfilled, depriving them of a future.

In fact, three central personnel on the film are frequently alleged to have lost their lives due to Stalker’s curse. According to Igor’ Maiboroda’s 2009 documentary Rerberg and Tarkovsky: The Reverse Side of 'Stalker', Georgii Rerberg, director of photography on the first, failed shoot of the film, was apparently so crushed by Tarkovsky’s rejection of him that he never recovered. No less dramatic was the death from cancer of actor Anatolii Solonitsyn soon after the film’s completion in mid-1982. But the most notable example is Tarkovsky’s own death from the disease at the close of 1986, seemingly presaged in Stalker by a calendar page glimpsed among other objects in the brackish water over which Tarkovsky’s camera glides, not long before the men reach the Room. 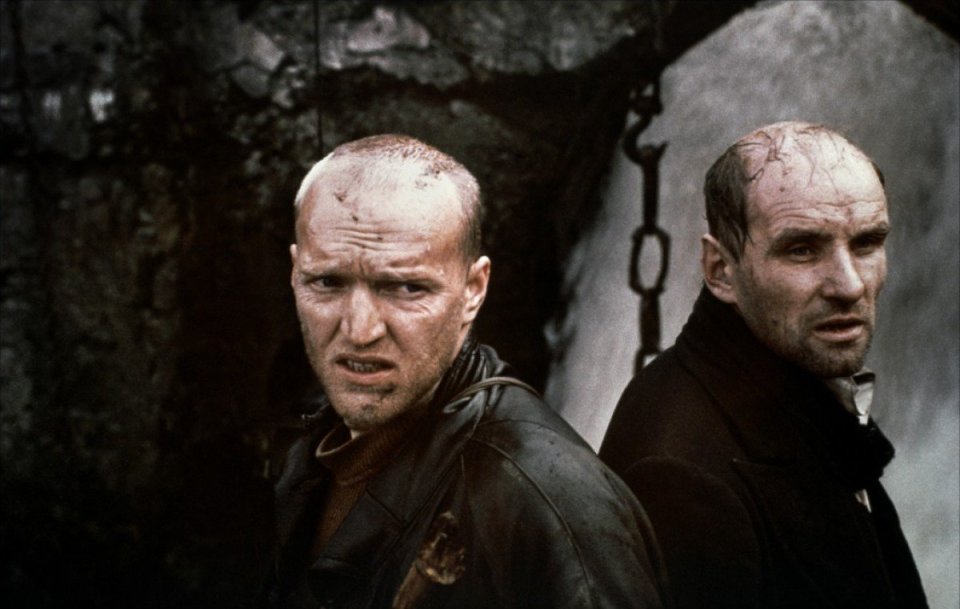 Biographers of both Solonitsyn and Tarkovsky have blamed their cancer on the conditions on the waterlogged set of Stalker, which included a disused power plant and an evidently polluted river. But these stories are the fantasies of people so taken with Stalker that they need it to have a significance beyond the capacity of any film: the significance of a prophecy, the meaning of a prediction. What all this suggests is that Stalker has come to denote the end of a particular kind of cinema — a cinema that no one ever suspected possible until Stalker consummated its impossible, self-destructive desire.

Andrei Tarkovsky: The Poet of Apocalypse