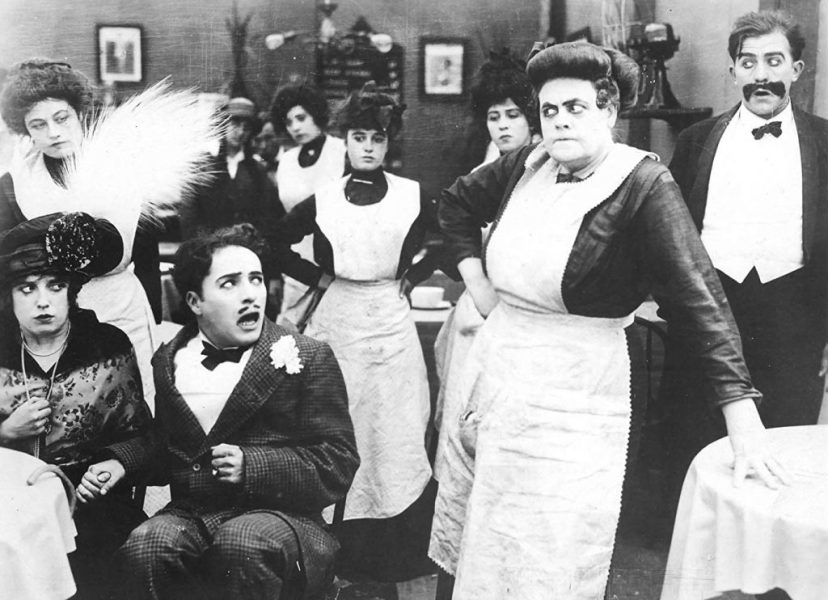 “Fate cast me to play the role of an ugly duckling with no promise of swanning … I have played my life as a comedy rather than the tragedy many would have made of it.” —Marie Dressler, The Life Story of an Ugly Duckling

At the time of her death in 1934, Marie Dressler was a top box-office draw and one of MGM’s most prestigious stars, along with such fellow A-listers as Greta Garbo, Jean Harlow, and Norma Shearer — a monumental achievement for an actress well into her sixties, and who tipped the scales at 200 pounds. Along with her fellow Canadian Mary Pickford, Dressler was one of this country’s most important and lucrative showbiz exports in the early part of the 20th century, headlining the first feature-length comedy film Tillie’s Punctured Romance (1914) alongside Charlie Chaplin, and even earning a Best Actress Academy Award for her performance in Min and Bill (1930). Yet today, 150 years after her birth, she is rarely given her proper due in histories of the industry and of screen comedy — perhaps a lingering symptom of her wholly improbable stardom.

Born Leila Marie Koerber in 1868 in Cobourg, Ontario, Dressler and her family relocated to Michigan when she was an adolescent. Lying about her age, she left home at the age of 14 and joined a travelling theatre troupe under the name Dressler, and made her debut as a chorus girl named “Cigarette” in a patriotic play called Under Two Flags. In 1892, Dressler made her Broadway debut in Waldemar, the Robber of the Rhine, a comedic play written by Maurice Barrymore, the father of John, Lionel, and Ethel. It was the Barrymore patriarch who convinced Dressler that she had no business being a dramatic actress or operatic diva, as she had long dreamed; rather, she should stick to comedy, as her unusual physique and commanding presence were lucrative assets and set her apart from other stars on Broadway and in vaudeville.

Dressler heeded his advice, and, with a succession of spotlighted roles in comedic plays, her career took off. By the early 1900s she was one of the most recognizable faces on Broadway, and in 1902 she appeared in the pages of Vanity Fair. The highpoint of her theatrical career came in 1910, with the staging of Tillie’s Nightmare on Broadway. A flop in its initial performances in various cities across the Midwest and upstate New York, the play was much revised by Dressler (without the permission of its author Edgar Smith) for its staging on the Great White Way. While Dressler’s embodiment of the title heroine Tillie Blobbs — a young girl who works in her mother’s boarding house and fantasizes of a career as an operatic diva (like Dressler in real life) — made perfect use of what the Chicago Tribune referred to as the actress’ “turbulent face and figure,” what was key to the star’s performance was the pathos that she brought to Tillie and her other comic characters. It was the emotive soul beneath the farceur’s mask that soon had motion-picture producers calling.

While Dressler had appeared as herself in two short subjects in 1909 and 1910, her true debut was in Tillie’s Punctured Romance, a new vehicle for her Tillie character directed by Mack Sennett. Dressler had given her fellow Canadian a jumpstart in the industry when she secured him his first job at a theatre in the early 1900s, and in the next decade Sennett became a wildly successful producer and director as the head of the legendary Keystone Studios. With Chaplin co-starring in an uncharacteristic role (he had debuted his soon-to-be iconic Tramp character earlier in 1914), playing a roguish scoundrel out to get Tillie’s inheritance by marrying her, and Keystone’s biggest star Mabel Normand as his scheming girlfriend, Sennett’s film utilized its performers’ comic chops and physicality to great effect. (Moving Picture World succinctly, if rather insensitively, summed up Dressler’s Tillie as “a sort of a reckless elephant with daredevil instincts consistently foiled by her size and weight.”) Tillie’s Punctured Romance proved to be one of Keystone’s most financially successful films, remaining in theatres for years after its initial release and inspiring two Dressler-starring sequels, Tillie’s Tomato Surprise in 1916 and Tillie Wakes Up the year after.

After the immense success of the Tillie films (as well as two subsequent 1917 features, The Scrublady and Fired), Dressler set out to become her own producer, founding the Marie Dressler Motion Picture Corporation with her husband Jim Dalton. (It would turn out later that they were not in fact legally married, as Dalton was a bigamist.) Intending to release 22 Tillie films distributed by the Mutual Film Corporation, the business failed almost before it began, and Dressler was left bankrupt. She spent the war years selling bonds and entertaining at veterans’ hospitals, but was unable to find any substantial roles on either screen or stage, her image now appearing too old-fashioned, too Edwardian in light of the dawning Jazz Age’s obsession with youth and glamour.

It would be Frances Marion, the screenwriter of Dressler’s final Tillie film, who offered Dressler her second chance at stardom. One of the most lauded and respected screenwriters of the silent era, Marion had befriended Dressler in 1917 and, knowing her destitute financial situation, used her influence with MGM production chief Irving Thalberg to bring Dressler onto the studio roster in 1927. Things got off to a rocky start with Dressler’s MGM debut, The Callahans and the Murphys (which reunited Dressler with her fellow Sennett alum Polly Moran), when the film was pulled from circulation after eliciting protests over its depiction of Irish Catholics. But her role as Marion Davies’ mother in King Vidor’s marvellous comedy The Patsy (1928) truly launched her comeback, leading to a variety of prestigious roles. 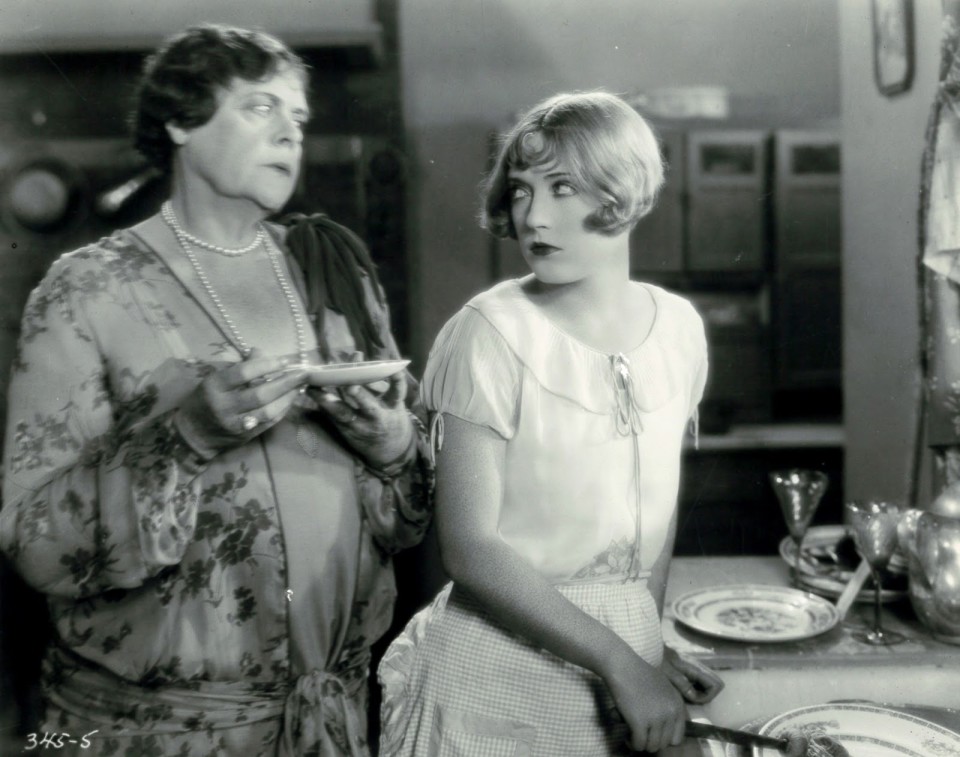 Marie Dressler and Marion Davies in The Patsy

At a time when many actors were concerned with the coming of sound, Dressler had confidence that she would persevere, as her voice — honed during decades of theatrical work — was as commanding as her physique. Her first talkie was one of the milestones of the early sound era: Anna Christie (1930), an adaptation of the Eugene O’Neill play that marked the all-talking debut of megastar Greta Garbo in the title role. While Dressler’s role as barfly Marthy Owens was small in comparison to the star’s, Dressler nevertheless garnered much praise from critics and audiences alike for her empathetic portrayal of the tragic, lonely alcoholic. 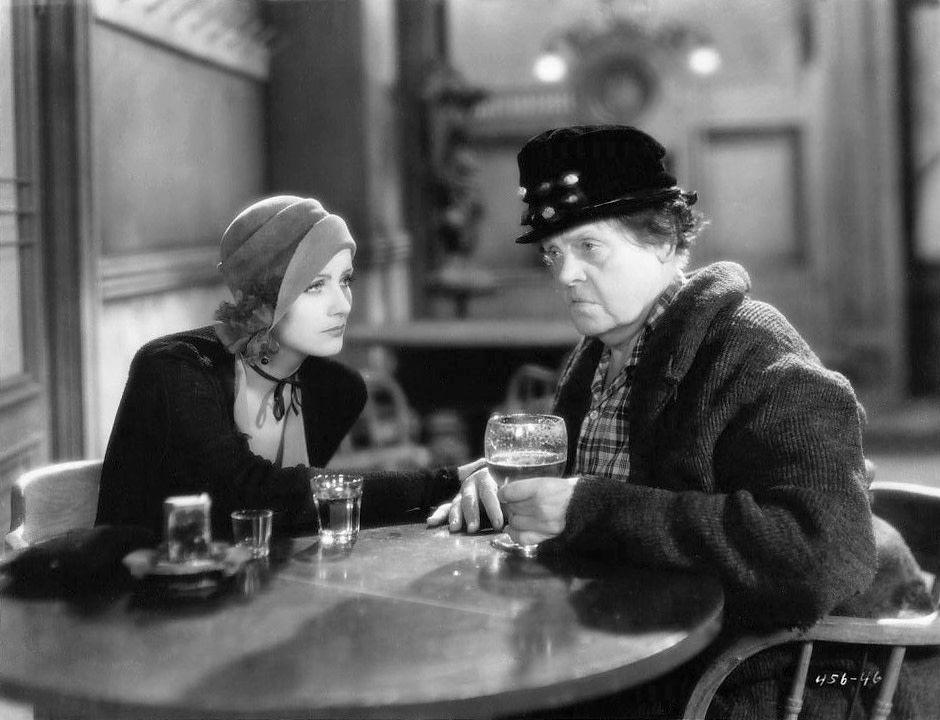 Two decades after Maurice Barrymore had cautioned her against dramatic roles, Dressler had finally achieved her dream. She now had her pick of parts, and in the same year as Anna Christie she played the role that won her the coveted Oscar: Min Divot, a dockside innkeeper raising the child of a prostitute, in Min and Bill. Three years later, Dressler and her M&B co-star Wallace Beery reunited for a quasi-sequel to that original hit, titled Tugboat Annie, and that same year she appeared on the cover of Time Magazine and anchored an ensemble of top MGM talent (including Jean Harlow and John and Lionel Barrymore) in George Cukor’s classic comedy Dinner at Eight.

In 1934, Dressler became severely ill with what was later revealed to be terminal cancer; reportedly MGM head Louis B. Mayer had asked the studio doctor to hide the diagnosis from Dressler so as to not upset her. She died in July of that year, at the age of 66. Unlike any other star of her age, at the time of her death Dressler was at a high point in her career. Few actresses, then or now, have accomplished what Dressler did, rising from the ashes of obsolescence to find a career revival in her later years — and proving without a doubt that an “ugly duckling” could hold court with the most glamorous of stars.