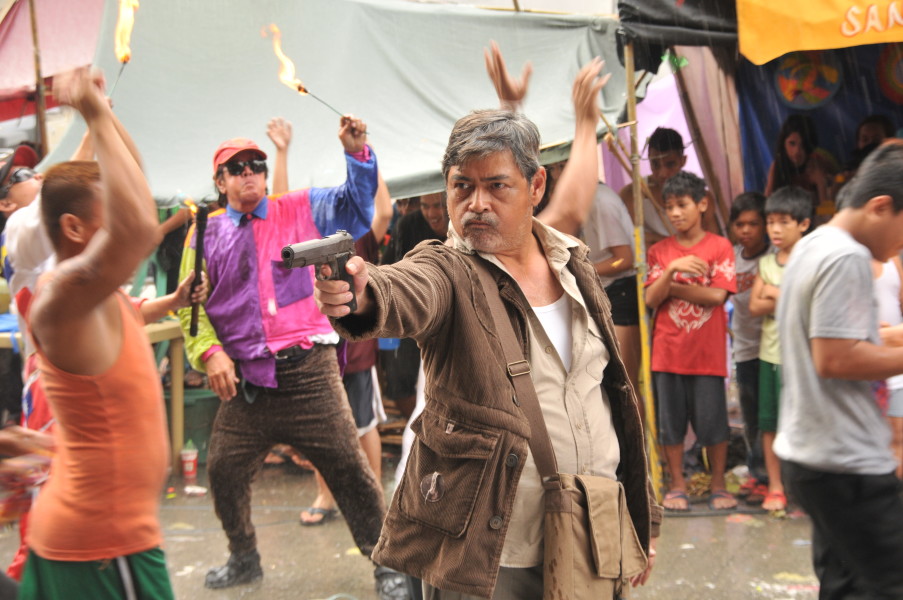 Since the days of Lino Brocka, ambitious filmmakers in the Philippines have proven themselves adept at cloaking political commentary and dissent within genre-movie templates. One of the unquestioned modern masters of this tradition is Erik Matti, whose films On the Job and Honor Thy Father — both featured in the TIFF Cinematheque series People Have the Power: Resistance in Filipino Cinema — use the thriller format to explore, respectively, the notorious phenomenon of government-sanctioned death squads and the poisonous intertwining of upper-class hypocrisy and fundamentalist Christianity in the modern Philippines.

In the conversation below, ScreenAnarchy founder Todd Brown — whose company XYZ Films helped produce On the Job, and who will be on hand to introduce our screening of the film on lucky Friday, October 13 — speaks with filmmaker, musician, and CBC Arts producer Romeo Candido about Matti’s place in contemporary Filipino cinema, current trends in the country’s film industry, and Romeo’s dreams of a highly unconventional John Carpenter tribute.

Romeo Candido: Todd, legend has it that you saw a teaser for On the Job before the movie was written, and from there you helped usher it into existence. Is this true, and if so, what was it about the teaser that made you want to roll the dice on it?

Todd Brown: Yeah, that is true. I’ve known Erik for a really long time, and programmed his stuff at a few festivals over the years. He sent me a screener for something once that included a second, unmarked DVD, which included an extended scene from On the Job. Joel Torre was already in it, and the moment I saw it I just absolutely knew that this was the movie where Erik was going to hit his full potential. It was just an amazing combination of style and substance, and the hook of the story — which is based on totally true stuff — was just so good. 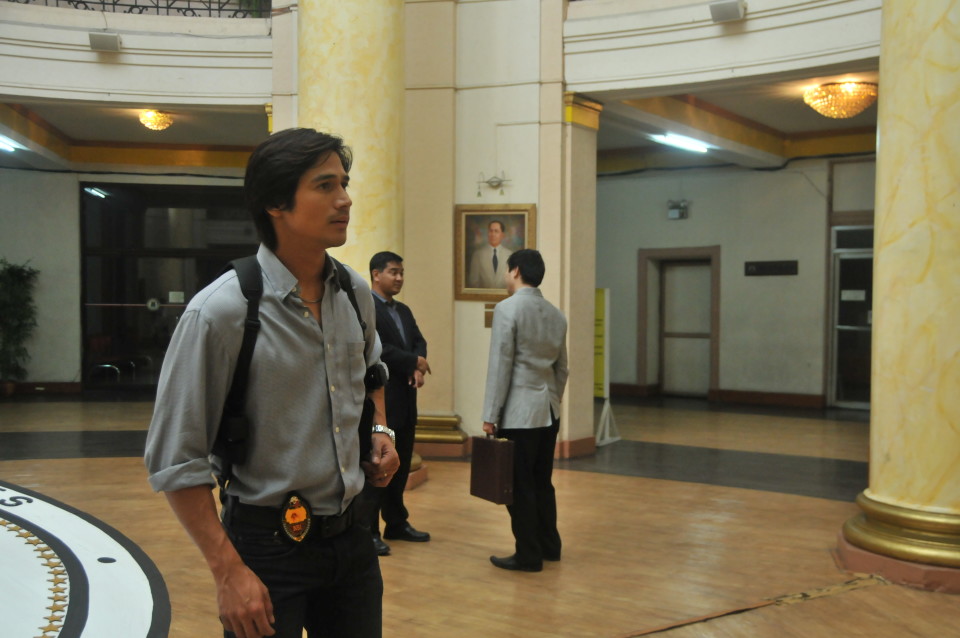 Piolo Pascual in On the Job

RC: I directed [On the Job co-star] Piolo Pascual in a vitamin commercial, and the thing I remember is all the women from the crew, the ad agency, and the brand going absolutely gaga when he walked into the room. He was a rom-com superstar, so I was surprised to see him in such a gritty movie. Can you talk about his involvement in the film?

TB: Ha! Yeah, I wasn’t involved in the casting process at all, but Erik knew he wanted Piolo really, really early on. I’ve never spoken to him directly about it, but I have more than a little suspicion that Erik just loves to cast these big stars as far against type as he possibly can, just to prove that they can be more than what the industry there allows them to be. He did it with Piolo, he did it with Dingdong Dantes, and he’s doing it now with Anne Curtis.

RC: I feel that Erik Matti is one of the greatest Filipino directors of all time. What kind of a contribution do you think he’s made to world cinema?

TB: I think we’re still a while away from being able to answer that, because Erik has only recently figured out who he really is and what he wants to do and has finally carved out the freedom to be able to do it. He’s basically created a whole new structure for making films in the Philippines, and we’re still just seeing the first act of that. But from what we’ve seen so far, I’d say he has the same combination of commercial appeal, character depth, and political subversiveness that Johnnie To has in his best work — and I don’t make that comparison lightly at all.

He’s also a great mentor and a very loud voice for change in the industry over there. He’s proving to the young generation that things can be different, and calling the old generation on their bullshit. A lot of that stuff is super-inside the industry there and not really visible to a casual viewer, but audiences around the world are going to be seeing the consequences of it for the next decade or so.

RC: What is it about Southeast Asian cinema that interests you so much?

TB: I don’t really know how to answer that, honestly. The cinematic language is similar enough to what we do here for things to feel welcoming when you sit down to watch it, but it’s also different enough to feel really unpredictable and fresh. And I think in a lot of the Southeast Asian film-producing nations — the Philippines, Vietnam, Indonesia, now Cambodia as well — nobody really knows what works or what’s a safe bet yet, so directors with really strong vision who are good in the room can kind of convince backers to let them do anything. It was like that in South Korea at the height of the wave there, before everybody retreated into the safety of mostly making rom-coms. There’s a subversive streak through the region, too, that I find really refreshing.

RC: The big dream for many of the Filipino creators in the Philippines is to get that ever-elusive Hollywood remake. Was there ever the possibility of that with this film?

TB: Was and is, yes. Baltasar Kormákur is currently attached to an English-language version of On the Job. 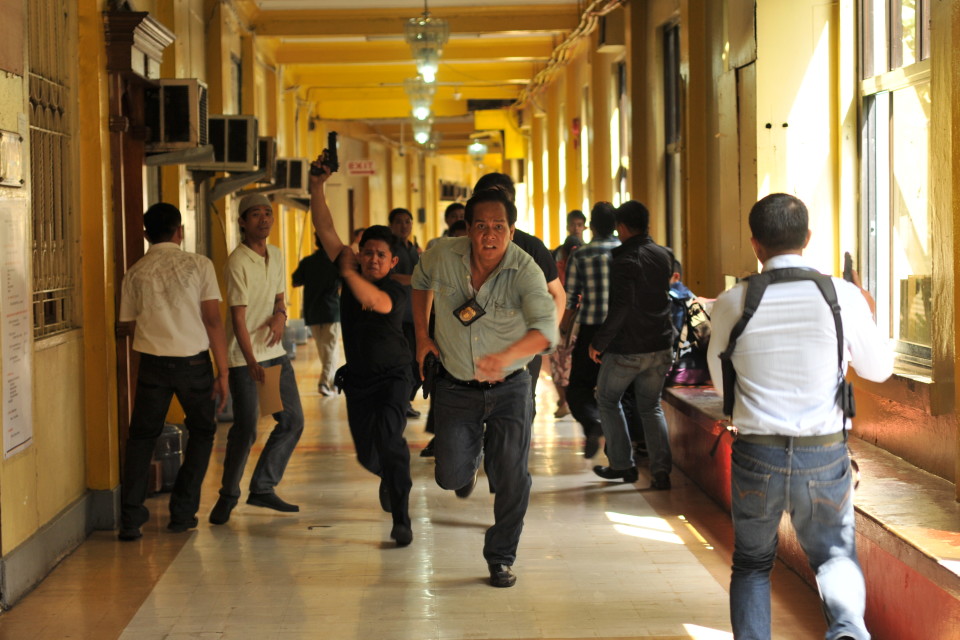 RC: Are there any more XYZ-Erik Matti collaborations planned for the future?

TB: Absolutely! We’re working with him right now on a film called Buy Bust, the Anne Curtis [film] I mentioned above — he’s taking a rom-com star and turning her into an action lead! They finish shooting later this month.

Obviously my view of Erik’s work, and all Filipino cinema, is totally from an outsider perspective. I’d love to hear you speak about Erik’s work from a Filipino perspective, and how Filipino cinema culture impacts the ex-pat community around the world. How much play does someone like Erik get within the Filipino community?

RC: Filipinos in the diaspora, who are still watching Filipino cinema, are usually watching to get a taste of the motherland. Most of these films come from the big studios like Star Cinema and GMA Films and are designed to appeal to the broadest audience possible, relying heavily on melodrama and on the kilig factor. Kilig is a term for which there is no real English translation — it essentially refers to that giddy feeling you get when crushing on someone. So kilig comes from watching the latest [onscreen] love team in a rom-com.

On the other side of the coin are the micro-budget indies that are driven by heart, ingenuity, and a passion for storytelling. Many of these films get programmed in international film festivals, but they don’t always have an impactful and profitable theatrical run, while the rom-coms are smashes. Of course, there are exceptions — I believe Erik is one of the few who are forging a path in the middle, with both an eye on commerce and a desire to elevate the level of filmmaking in the country. In this internet world, Filipino films aren't always in the centre of the cultural conversation in the diaspora, but when a director makes a movie that really kills, it becomes a rallying cry.

TB: I remember Erik once told me — and I don’t know how much of this was an exaggeration and how much was true — that his preferred work cycle, if he could get people to agree to do it, was to shoot for 24 hours and then sleep for 12 hours before repeating. Having worked in both industries a lot yourself, how punk-rock is it to work over there as opposed to here in Canada?

RC: There is no IATSE over there, no Actors Equity, no union rep lording over production, so a hardcore round-the-clock style like that is totally doable. I’ve shot 28 hours straight on a Chinese Tea commercial, and I was super grumpy by the end of it. Filipino crews can really grind, but who wants to work that hard? And it’s hot. I can see why Direk (the respectful term for a director) Erik would want a long shoot though. Sometimes you need to get into that type of flow.

TB: Both you and Erik (in his other work) have displayed an affinity for Filipino folklore in your films. What is the draw for you in these traditions, and what do you think sets those legends apart from other world mythologies?

RC: The Philippines is so magic. I don't know if it’s because it’s on an island, or because of all the unresolved deaths over there (and counting), or because of the sheer belief in the supernatural. But the folklore, the creatures, the stories are so diverse and surprising and intertwined with everyday life there. The mix of indigenous and colonized psyches makes that supernatural world completely unique — [for filmmakers,] it’s a deep well to draw from. I would love to do another genre film steeped in that folklore, or rather bring that sensibility to projects in North America.

TB: You mentioned that you consider Erik one of the greatest living Filipino directors. Who else would you have on that list?

TB: If you had the opportunity to go back to the Philippines and tell any story you wanted, what would that story be? How different would it be if you had that same opportunity here in Canada?

RC: If I could do one in the Philippines, it would be a Filipino stick-fighting version of Escape from New York with zombies, starring Bruno Mars and Angel Aquino. If I could make any movie in Canada, it would be a Canadian remake of Erik Matti’s Seklusyon set in 17th-century Canada, starring Jay Baruchel, Connor Jessup, Tatiana Maslany and Jennifer Podemski.

Romeo Candido is a writer, director, musician, and a Senior Producer for CBC Arts. His feature-length horror film Ang Pamana: The Inheritance was theatrically released in Southeast Asia, and his CSA-nominated interactive web musical Prison Dancer was also staged as a live production at the New York Musical Festival. His latest music project DATU just released their first album High Blood on Apple Music, Spotify and Bandcamp, and the music videos associated with it have reached over a million views online.

Todd Brown is the founder and editor of the international film website ScreenAnarchy.com and the Head of International Acquisitions at XYZ Films. As a producer, Brown has had a hand in the all-female horror anthology XX, Jamie Dagg’s Laos-set thriller River, the Turkish horror phenomenon Baskin, and the Indonesian martials-arts powerhouses The Raid: Redemption and The Raid 2.

The Possibilities of Pleasure

On the Job introduced by Todd Brown

Dark is the Night