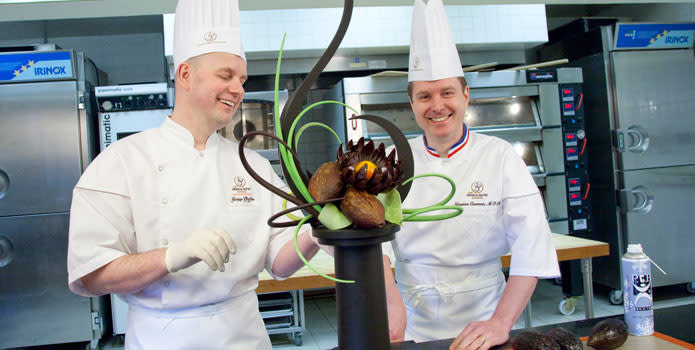 D.A. Pennebaker and Chris Hegedus on Kings of Pastry

Collaborative documentary duo D.A. Pennebaker and Chris Hegedus screened their latest documentary Kings of Pastry(2009) and discuss the challenges in documentary filmmaking with students and faculty

In a Higher Learning Master Class, acclaimed documentary filmmakers D.A. Pennebaker and Chris Hegedus discussed their decade-long collaboration while presenting their latest film Kings of Pastry (2009). The screening was followed by a Q&A where post-secondary students and faculty had a chance to ask the filmmaking duo about their impressive careers. Pennebaker and Hegedus outlined their introduction to renowned pastry chef Jacquy Pfeiffer, whose participation in the 2007 Meilleurs Ouvriers de France (Best Craftsman in France) competition is the subject of Kings of Pastry. The filmmakers reflected on their past films, such as The War Room (1993), to explain the delicate relationship between the subject and filmmaker. Pennebaker also discussed his experience documenting the legendary musician Bob Dylan in the acclaimed Don't Look Back (1967). For his career achievements, Pennebaker was awarded a Lifetime Achievement Oscar by the Academy in 2012, making him the first documentarian ever to be recognized with this distinction. Other topics included: the challenges involved in distributing documentary film and technological advances in documentary filmmaking. This Higher Learning event was held on December 3, 2010 at TIFF Bell Lightbox.