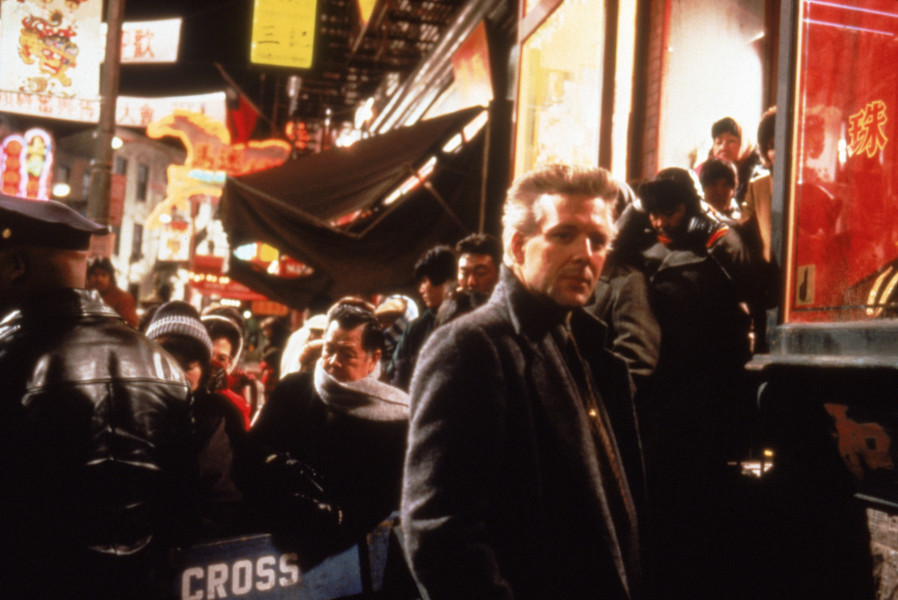 “You’re acting like a child.” “Well, a great man is one who, in manhood, still keeps the heart of a child.” —Year of the Dragon

“I’m not a teacher, and I’m not a preacher. I’m a reacher.” —Michael Cimino on the Year of the Dragon DVD commentary track

In the tributes and obituaries about director Michael Cimino following his death in July 2016, he was predictably recalled as the director of two watershed movies of the New American Cinema of the ’70s (and dawn of the ’80s), The Deer Hunter and Heaven’s Gate — the former rocketing him to the top of the Hollywood ladder, winning him Oscars for Best Director and Best Picture, the latter a legendary critical and commercial failure that effectively destroyed its studio and landed him in de facto Director Jail. Most of these write-ups breeze past the rest of Cimino’s career, focusing instead on his years of reclusiveness before his re-emergence to bask in a late-life reappraisal of Heaven’s Gate — which revealed that he had also gone through some alarming plastic surgery. But for those who wish to grasp the full Cimino Conundrum and discover the lessons he learned (or, more importantly, didn’t learn) from his meteoric rise and fall, the berserk, highly-problematic neo-noir Year of the Dragon is an essential piece of the puzzle, and can be also be viewed as a thinly veiled self-portrait of the artist as a mortally wounded man.

Year of the Dragon was Cimino’s first film in five years, after he had been fired in pre-production on both Footloose (!) and The Pope of Greenwich Village over “creative differences.” Clearly, Cimino had done little to correct his reputation for being overly meticulous and incredibly difficult — qualities that dated all the way back to his early career as a Madison Avenue commercial director during the debauched Mad Men era. The famous ad Cimino made for United Airlines in 1967 (“Take Me Along”) displays many of the characteristics of his feature filmmaking to come: dynamic visuals, over-deliberate art direction, and a particularly bombastic and chauvinistic take on Americana.

Fresh off his sequential firings, Cimino’s idea of being on “good behaviour” was agreeing to direct a pulpy, commercial-minded studio picture for MGM/UA, based very loosely on a best-selling novel by Robert Daley (whose non-fiction Prince of the City had been cinematized by Sidney Lumet in 1981). Year of the Dragon was shot on a generous budget courtesy of producer Dino De Laurentiis, and Cimino worked on the screenplay with fellow dude-bro Oliver Stone, who was on the brink of his own successful directing career (Stone had agreed to work on Dragon on the understanding that De Laurentiis would produce his dream project Platoon — a deal that quickly fell through). Cimino was given the coveted right to final cut by De Laurentiis (along with a private side note saying that he didn’t actually have final cut, as was revealed via the producer’s testimony during the legal battle surrounding Cimino’s next debacle The Sicilian), and an elaborate recreation of New York’s Mott Street in Chinatown was built on the new De Laurentiis studio soundstages in Wilmington, North Carolina — a set so realistic that it even fooled native New Yorker Stanley Kubrick, when Cimino screened the finished film for him in London. (Another De Laurentiis production, Blue Velvet, was shot in the same town a year later.)

NYC by way of North Carolina: one of the elaborate Chinatown sets for YEAR OF THE DRAGON

Cimino often boasted that he delivered Dragon on time and under-budget, but this was far from a disciplined production. Despite the cost savings of filming on the North Carolina sets, the production travelled to Bangkok and Myanmar for superfluous scenes of exposition (featuring hundreds of background extras), and additional photography took place in NYC, Vancouver, Victoria, and even Toronto: star Mickey Rourke tries to hit on romantic interest Ariane in front of the Bank of Montreal tower at King and Bay.

The fascinating thing about Year of the Dragon as a viewing experience is its fundamental cognitive dissonance: such accomplished filmmaking and intricate production design in the service of a trashy narrative built around a racist, sexist, and clearly deranged protagonist whom we are supposed to root for, and whose monomaniacal pursuit of victory at all costs reflects its director’s bullheaded singlemindedness and martyr complex. Said protagonist and director surrogate is Rourke’s Cpt. Stanley White, a supremely arrogant, self-righteous man given to identifying himself as “the most highly decorated cop in New York City,” as well as a deeply flawed person harbouring a pathological hatred of Asians stemming from his traumatic tour of duty in Vietnam. White is perpetually at loggerheads with “The System” in all its many and varied forms, from the Chinese crime syndicate that has been operating by its own code for centuries to his own superiors on the force, who (quite understandably) try to rein him in. “This is Vietnam all over again!” protests White when he is called on the carpet by the police commissioner after stomping on the civil liberties of half the population of Chinatown: “Nobody wants to win this thing do they? Just flat-out win, do they?”

Perhaps no scene better embodies Dragon’s dissonance than the single-take sequence of White/Cimino addressing his troops/critics, which is staged with bravura camera movement and blocking but smothered in fascist, hyper-macho dialogue, with an out-of-nowhere blast of misogyny as the cherry on top.

In a recurring refrain throughout the film, various characters close to White question his methods, his sanity, and his willingness to sacrifice anything and everything in pursuit of his goal of “cleaning up Chinatown,” in heavy-handed dialogue that clearly echoes how Cimino felt about the United Artists studio executives who had given him a hard time on the Heaven’s Gate shoot for such antics as keeping the crew waiting all afternoon for a specific cloud to enter the shot. “You know what your problem is, Stanley?” asks his boss. “You move through this department like a piece of heavy machinery. No one likes you. They all tell you you're a great cop but they don’t like you!” White/Cimino’s response: “So what?” (On the DVD director’s commentary track for Year of the Dragon, Cimino boasts of himself that “I get along with gangsters and kings, dictators, but I guess I can’t deal with middle management. It’s my downfall. High and low.”)

White/Cimino also spends a good amount of the film wallowing in grief and self-pity, even as he is clearly the chief architect of his own misfortune. “You care too much, Stanley,” says his boss after relieving him of his command following yet more wanton, White-instigated death and destruction. “How can anybody care too much?” White whimpers, before suddenly turning and punching his refrigerator. To top off Cimino’s abject martyrology, in the film’s climax White is shot in the hand, cementing the director’s conception of his flawed protagonist (and of himself) as a Christ figure, suffering for the sins of others. At the end of the film, Cimino comes as close as he would ever get to offering an explanation for himself and the collapse of his career when White says to his long-suffering love interest, “You were right, I was wrong, I’m sorry. I’d like to be a nice guy, I would. I just don’t know how to be nice.” (Interestingly, this line of dialogue to end the film was imposed on Cimino by the studio.)

Upon its initial release Year of the Dragon was protested by Chinese-American anti-defamation groups, savaged by North American critics, and was a box-office disappointment. In Europe, however — where Heaven’s Gate had been met with a considerably warmer reception than it had at home — Dragon was hailed as another great success for its director; in Cimino-loving France, the film placed third in the 1985 Cahiers du Cinéma poll of the best films of the year, was nominated for the César for Best Foreign Film, and was eventually released in a lavish DVD box set accompanied by a grandly titled monograph. Not all the Euro-enthusiasm was couched in such hoity-toity terms, however: the Italian theatrical trailer, which plays like one of De Laurentiis’ ’70s Eurotrash action films, is a truer representation of the film’s demented spirit, a lurid cocktail of nastiness, sex and ultraviolence turned up to 11. (Small wonder that Dragon is a favourite of Quentin Tarantino, who hailed the film's gruesome restaurant shootout as "a true masterpiece of filmmaking.")

Jesse Hawken introduces Year of the Dragon on Friday, February 10 at 6:30pm as part of TIFF Cinematheque's mini-tribute to Michael Cimino. See below for more screenings.