Call of Duty: A Film Critic Goes Before the Camera 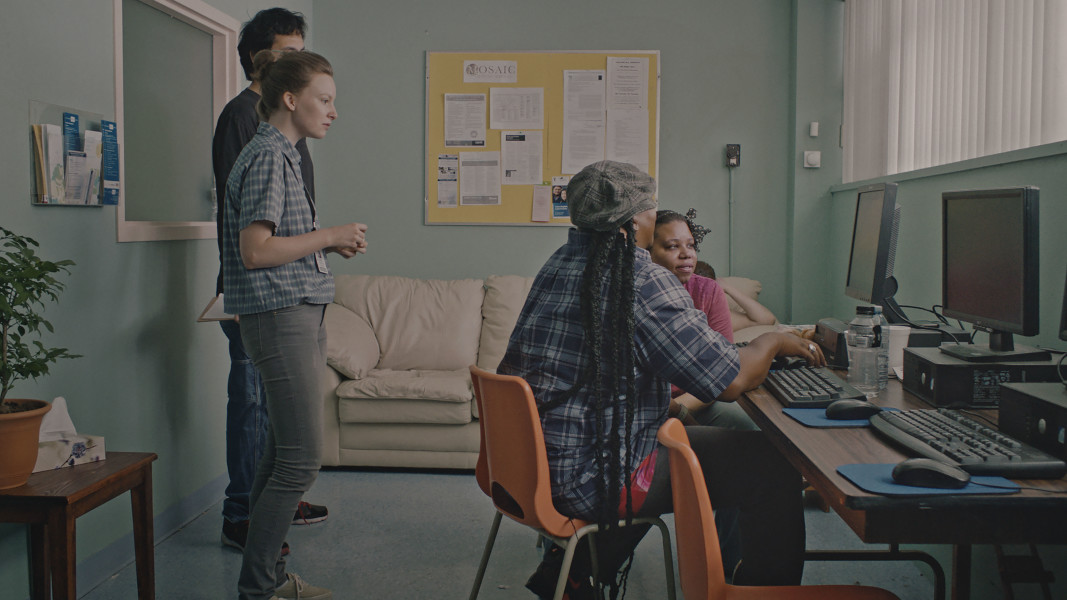 Antoine Bourges introduces the Toronto premiere of Fail to Appear on Thursday, June 7 as part of MDFF Selects: Presented by Cinema Scope and TIFF.

Every great actor has at least one role as a lawyer on their resume. Think Spencer Tracy putting Biblical literalism on the stand in Inherit the Wind, or Gregory Peck’s anti-racist summation in To Kill a Mockingbird. Think Joe Pesci as My Cousin Vinny or Bob Odenkirk as Jimmy McGill, a.k.a. Saul Goodman. Think Matthew McConaughey as The Lincoln Lawyer. (I think about that movie a lot, and would watch a sequel right now). The list goes on and on. Such was the heavy burden of film history on my shoulders when my friends Antoine Bourges and Dan Montgomery asked me to play a defense attorney in a feature-film project shooting in Toronto in the summer of 2016.

My previous screen acting experience had been limited to a series of shorts written and directed by my then high-school classmate Hugh Gibson (now deservedly known for his prize-winning documentary The Stairs), in one of which I was filmed walking happily through North Toronto in a Béla Tarr-ish tracking shot to the sounds of Radiohead’s “Paranoid Android” before being ambushed and stabbed to death by our classmate Nick Raymond. (Hugh claims that no digital copy of this short exists, which is a shame, if it’s not a lie; he also reminded me over the weekend that this scene was shot on the same day that we learned that the venerable, independent Yonge and Eglinton video store Art & Trash was closing, making my character’s death symbolic of the end of our adolescent cinephilia.)

In any event, I knew that Dan and Antoine’s request had very little to do with my CV, and was more a gesture of friendship and Toronto film-community solidarity. Fair enough: I’ve been writing about Dan’s production company Medium Density Fibreboard Films (which he founded with director Kazik Radwanski) pretty much since its inception, and I have been an advocate for Antoine’s work since reviewing his 2010 short film Woman Waiting when it played at TIFF. (I also presented a selection of Antoine’s films in New York as part of a Museum of the Moving Image sidebar on young Canadian cinema in 2015.) 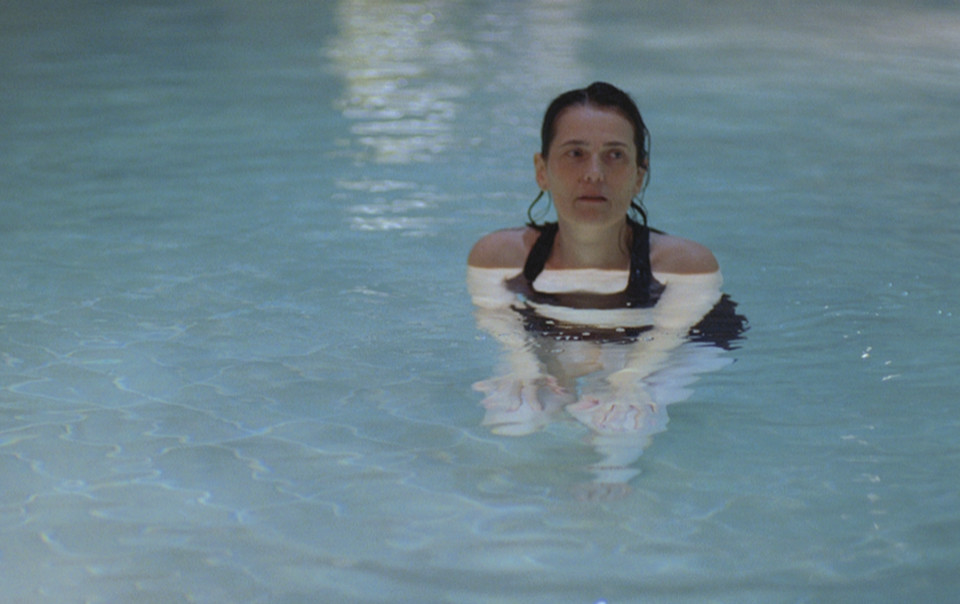 Still, there must have been a reason that Antoine and Dan had thought of me for the role of “Duty Counsel Hartmann” specifically. “You’re nice and I think that this guy is probably nice,” was how Antoine put it when we discussed the role a few weeks before the shoot date, which had been booked for a weekend in June. (I confess I was a bit disappointed. Was the Lincoln Lawyer “nice?” Maybe, but he was also so much more.) 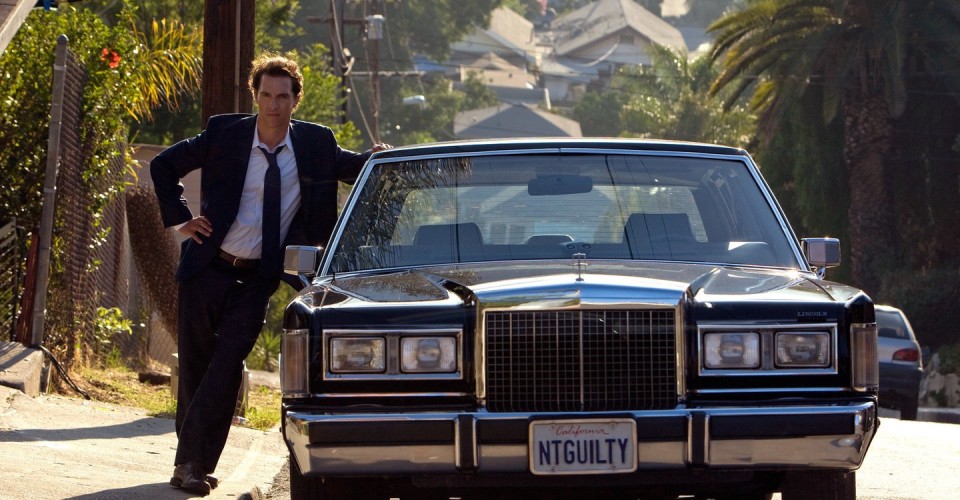 “Don’t worry, you’ll be reading everything off a sheet of paper,” Antoine added. That was encouraging even if I had enough time on my hands at that point to at least try to memorize some dialogue. I was instructed via email to bring a suit and tie to the Provincial Courts of Ontario at 444 College Street. Call time was 9am.

Time was very much of the essence: because the courts would be in use during the week, Antoine had to get everything for what he described as the film’s longest and most dialogue-heavy sequence by the end of the weekend; there would be no second chances in this location. If you’ve ever been on a film set, the weird mix therein of boredom and anxiety (both sensations tied to the passing of time) is overpowering: the minutes drag and the hours fly. For the first three hours of the first day, I floated between the long rows of benches in the hallways outside the courtrooms trying not to sweat through my suit and chatting with my fellow actors, whose varied backgrounds as full-timers, semi-pros and total neophytes made for interesting (and reassuring) conversation. I already knew one of the film’s leads, Deragh Campbell, from her work in movies like Matthew Porterfield’s I Used to Be Darker and Sofia Bohdanowicz’s Never Eat Alone, and also as a friend. During our copious downtime, she introduced me to Nathan Roder, whose character Eric was the common link between our three roles. 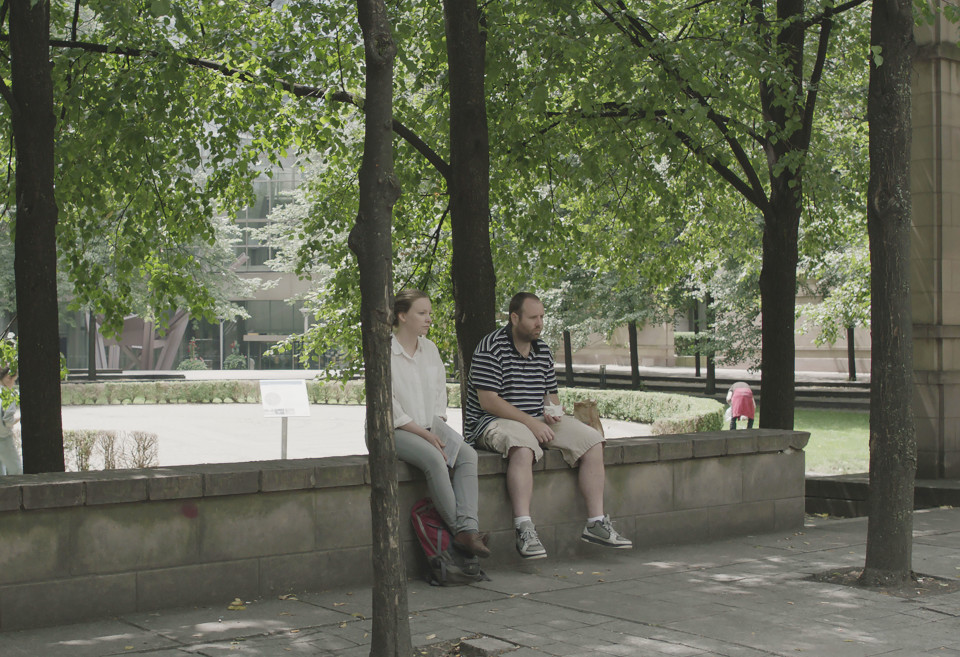 Deragh Campbell and Nathan Roder in Fail to Appear

In Fail to Appear, Eric, who has been arrested for stealing items from an electronics store and then skipped his scheduled court date, is represented in front of a judge by a lawyer (played by me) who is trying to negotiate favorable terms for a speedy release. Because my character is a court-appointed representative, his attitude towards Eric is relatively neutral. The young man is just one of many names on the docket for the day; in this situation, the best advocacy is a matter of concise, dispassionate clarity. For Deragh’s character Isolde, a social worker whose organization is designed to help individuals dealing with “addiction, poverty, health and mental health issues,” Eric is more of a priority: her job is to help him transition back into the community. In terms of the film’s narrative, the courtroom sequence is where Eric reacquires his freedom, although as Fail to Appear goes on, it’s unclear whether he’s been emancipated from his demons or whether it’s possible for somebody like Isolde — a trainee whose good intentions belie a lack of experience — to really offer the sort of support that he needs.

The reason that I admire Antoine’s work, including (for all my personal bias) Fail to Appear, is because it interrogates the sort of dynamics between individuals and institutions that other movies either ignore, gloss over, or melodramatize. His films’ intimate, naturalistic camera style and fealty to realism binds them to other titles in a recent and impressive cycle of young(ish) Canadian independent cinema dating back to the start of the 2010s — with Kaz’s 2011 feature Tower cited by many as an inception point — but with a more explicitly sociopolitical focus. Woman Waiting concerns a newly impoverished woman (Carmen Casanova) in the midst of applying to assisted-living facilities in Vancouver, her personality and sense of purpose paralyzed by the sensation of falling into the city’s social safety net; the excellent extended short East Hastings Pharmacy used the intake rhythm of a busy Vancouver methadone clinic (actually a replica space erected in a rented property) to show how a variety of characters negotiate both their respective addictions and their tricky relationships to medical support and care. 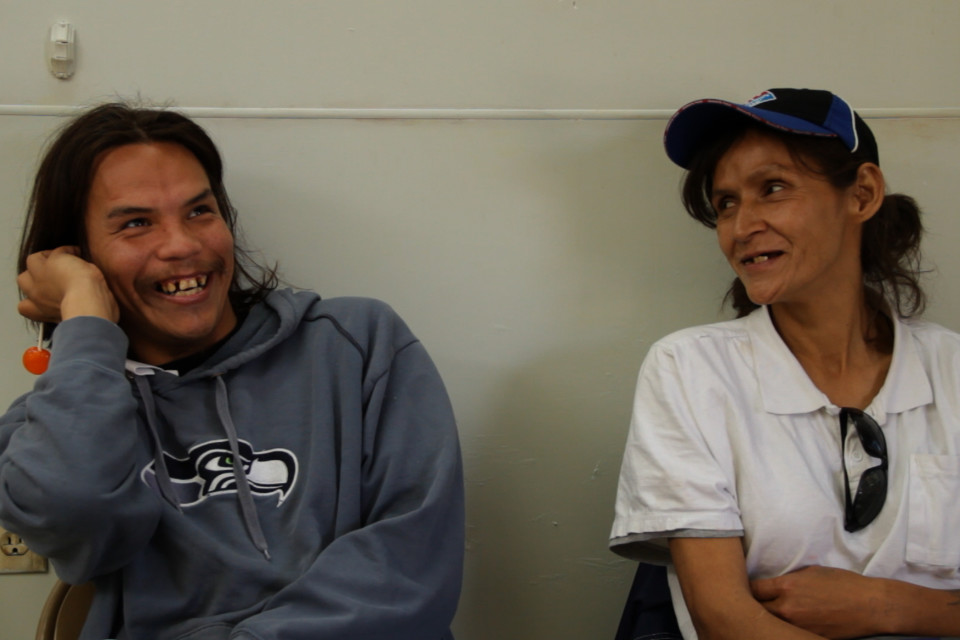 One of the most interesting things about East Hastings Pharmacy is the way it balances artifice and authenticity. It’s a movie largely populated by non-actors: the addicts we see coming to get their doses are to an extent “playing themselves,” and the film takes its tonal and dramatic cues from their improvisations, bouncing them off of the reactions of the pharmacist, who is played by a professional actress and separated from her clientele by a smudged, transparent window that takes on a metaphorical dimension. “By collaborating with the Eastside performers and letting them act and reenact their everyday actions, the film is only offering the viewer some possible narratives of their lives,” Antoine told Cinema Scope’s Michael Vass in 2012. “I don’t think they are showing their ‘true selves’ so much as their own evocations of themselves (or whoever they chose to portray… I think it was important to give this space to the participants considering the nature of the situations portrayed in the film.”

I thought about these comments while watching Fail to Appear, which inverts these variables, at least in the sequence I performed in. The Ontario Courts are, of course, a genuine location, and the dialogue given to my character and the crown attorney (played by Delphine Roussel, who appeared in Ingrid Veninger’s Porcupine Lake) was derived by Antoine from actual hearings he attended: the words are exactly as dry and procedural as a court transcript, with lots of ritualized address and protocol between the lawyers and mostly “yes” or “no” questions thrown towards their clients. But where East Hastings Pharmacy ambitiously re-created an authentic space and then populated it with non-actors whose presences wove in some texture of reality, the courtroom scene in Fail to Appear is an example of an authentic space inhabited by people who are pretending — and in my case, trying not to be the element that finally violates the illusion. 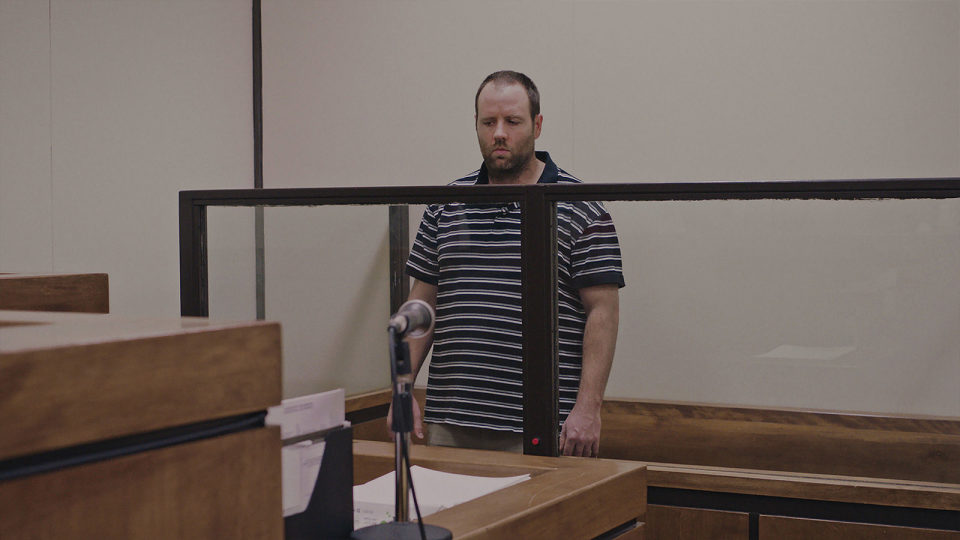 Nathan Roder in Fail to Appear

Antoine hadn’t lied that I’d be reading my dialogue off of a piece of paper, which made sense insofar as most of the Duty Counsel’s job depends on referring to his notes anyway. He can’t be asked to remember much about his clients when he has so many of them, and when the hearings are so quick and perfunctory. When it was finally time for me to shoot, I had a lot of ideas about how I would read my lines: I would either make Duty Counsel Hartmann into an everyday hero whose commitment to his client was beyond reproach, or, if that didn’t work, I’d go the other way and try to convey a weariness and cynicism about the whole thing.

These were big plans — Paul Newman-in-The Verdict-type plans — but as the takes went on, I found myself scaling back and internalizing Antoine’s direction, which was always subtly (and politely) asking me to do less: stand more still, read slower, avoid too much eye contact with the people around me. In the back of my mind, I wondered if these adjustments were being suggested because I was over-acting — a mortifying thought — but I realized over time that the direction I was getting made perfect sense in the context of my character. His job was largely a matter of going through the motions, and, accordingly, so was mine. I wasn’t being asked to evoke an aspect of myself, but rather to downplay my own personality (and whatever personality I imagined this guy might have) in order to strengthen the procedural texture. Once I got to the point where it finally looked and sounded like I was reciting — i.e., once any attempt at performance style has been stripped out of my attempts at acting — I began to feel like I really did belong there.

I’ve watched Fail to Appear twice now, and I think it’s a film with some really wonderful moments — a lot of them courtesy of Deragh and Nathan, whose interactions in the scenes after Eric is removed from court resonate with a two-way awkwardness that’s somehow fair to both characters — and also some stark, memorable staging in the final section, including a musical performance that manages to be comically surprising and melancholy at the same time. I also think I’m okay in it, which is a relief. I did get a text from an award-winning Montreal-based director assuring me that I was “good,” and as he’s recently worked with somebody I consider to be one of the greatest actors of all time, I will take the compliment — although I also suspect that he was just being nice. I can handle the truth.

Fail to Appear with Antoine Bourges

Life/Dreamlife/Afterlife: Jacquelyn Mills on *In the Waves*

Intention and Circumstance: With Hong Sangsoo in Hamburg