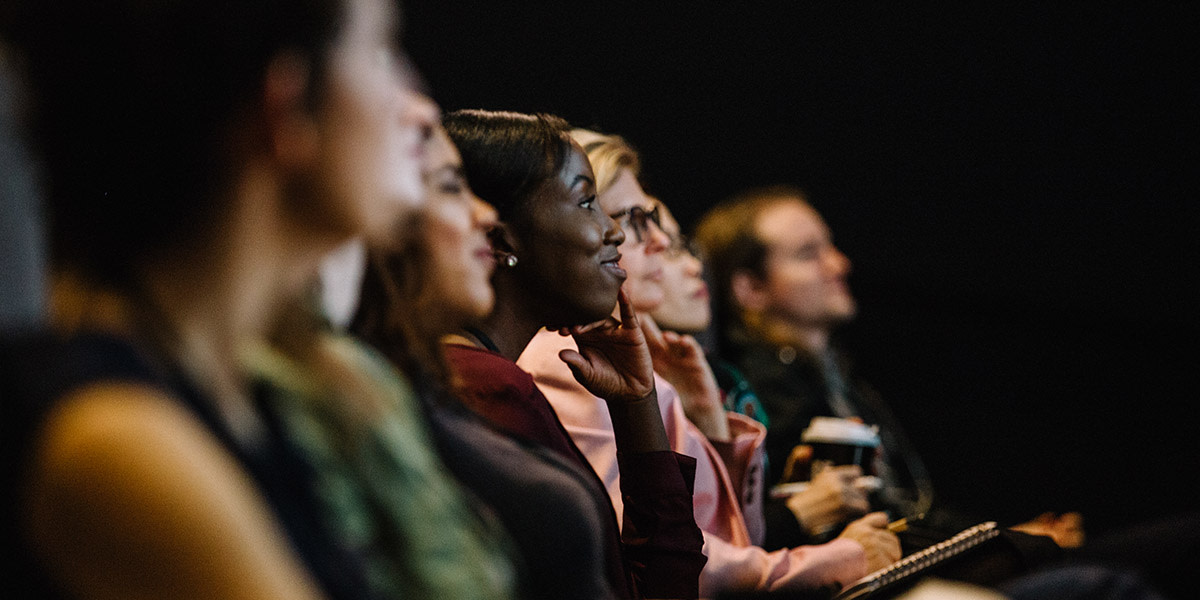 The programmers behind TIFF ‘17’s Industry Conference detail how this year will get filmmakers more inspired, encouraged, and connected than ever

Watching movies and attending the parties at TIFF is all fun and games until someone loses a business card. Kidding aside, serious filmmakers know that if they want to make an impact, they need to be aware of the issues their industry is facing and who is shaping the conversation. Enter the TIFF Industry Team: Director of Industry Kathleen Drumm, Industry Programmer Karina Rotenstein, and Industry Associate Programer Olena Decock. They pay close attention to the key films, issues, and sociopolitical ideas that are impacting the world to curate a festival-within-a-festival of keynote speakers, master classes, and panelists. This year’s highlights include the “At The Table” panel discussion in collaboration with the African American Film Critics Association, which unpacks a film’s journey as it makes it way through every crucial stage from development to distribution, master class interviews and keynote speeches from Larry Wilmore, Armando Iannucci, and the Swedish Film Institute’s Anna Serner; and conversations between The Guardian’s Peter Bradshaw, Glenn Close, and Canadian directors Patricia Rozema and Mary Harron. The Pitch This! sessions and Foundations series (new this year!) gives filmmakers the chance to flex their pitching muscles or talk with creators about their individual processes. Read on for recommendations of not-to-miss industry events and films to watch at TIFF ’17, or for predictions on what this year’s most impactful moments might be. A full list of industry programming can be found here.

__How reactive were you in programming this year’s conference, in terms of the issues that have emerged over the last year in film and culture? __

Kathleen Drumm (Director, Industry): The Conference is a culmination of the conversations we’ve had over the last year, as we talked about challenges and opportunities shaping up for filmmakers and the wider industry. There’s been momentum around certain ongoing points of interest, like the continued debate about gender, diversity, and equity.

Karina Rotenstein (Industry Programmer): I also like to balance things that affect the socio-political landscape with some of the issues of the business itself that affect and influence artists.

Past alumni of the TIFF Industry Talent Lab discuss their experiences.

What resources do filmmakers need when they're navigating a humongous festival like TIFF?

Kathleen Drumm: The business is defined by relationships, so filmmakers need the opportunity to meet people who might have a positive impact on their career. That means eyeballing decision-makers, making new friends, and finding potential collaborators. This year, we have come up with ways for filmmakers to have meaningful conversations about their projects and to meet international players through our Connections and Breakfast events. We also want to help people understand how all the pieces of the industry fit together. Karina has put together a fascinating panel called At The Table, which breaks down every step in the decision-making process from script to audience engagement and examines how decision-makers impact a film’s journey in ways creators may not realize.

Karina Rotenstein: They also need to see films, so they understand what different cinematic languages are used across the world. We live in a society that champions free speech, and this is not always where a lot of filmmakers come from. TIFF is a great hub for film communities around the world to come together and for people to be themselves.

Are there themes in the Industry Conference that are also running through the films at TIFF ’17?

Kathleen Drumm: The importance of storytelling is something we're really focused on — not only the power of great screenwriting, but also how film as a medium can influence society and break down barriers between people.

Karina Rotenstein: One of the themes that always runs throughout TIFF is the role of the artist. Filmmakers are the artistic reporters of our time, especially right now.

Karina Rotenstein: On the mogul side, we have Anna Serner [head of the Swedish Film Institute] and Cassian Elwes [veteran producer of Dallas Buyer’s Club and TIFF '17 film Mudbound]. These are two advocates for independent cinema, for opening doors for new and better representation. That call to action is what all our master classes speak to, as well. 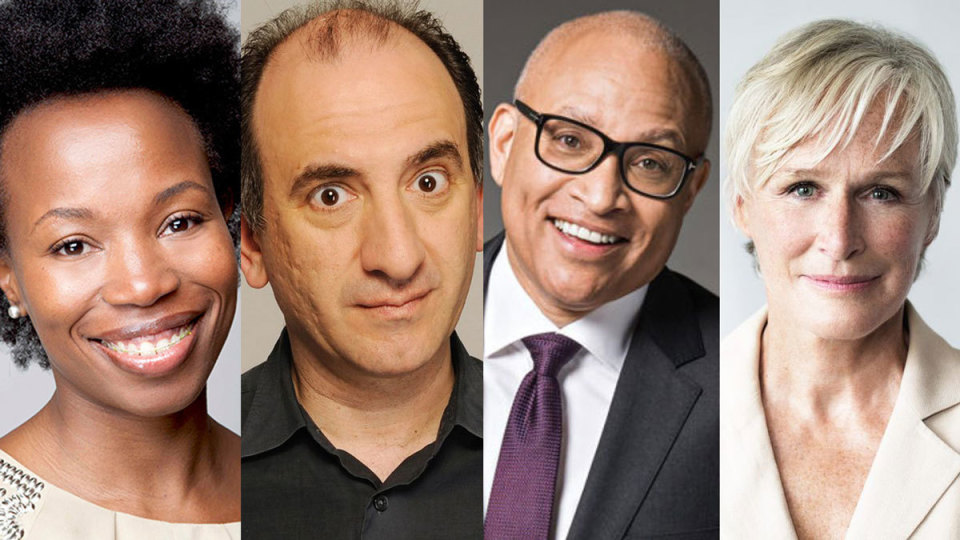 Speakers at the TIFF Industry Conference include (from left to right): Syrinthia Studer, Armando Iannucci, Larry Wilmore, and Glenn Close.

What are the can't-miss highlights?

Karina Rotenstein: Everything between September 8 through the 13! I'm very excited to welcome Larry Wilmore [the showrunner of Black-ish and Insecure]. This is his first time to TIFF. Last year we had Jill Soloway, who gave an amazing keynote speech on the female gaze. This time, we have Larry, who will talk about keeping it 100 and being engaged and informed, with Jesse Wente. Carving a career in comedy over 25 years is pretty remarkable. It's going to be really enlightening, smart, and funny!

Kathleen Drumm: I'm looking forward to Anna Serner’s keynote, as she’s always a candid and provocative speaker. She told us she wants to be "roasted" onstage by a hard-nosed journalist — can’t wait for that! Sweden is so interesting right now. Not only is Anna a driving force in the conversation about gender equality, but the Swedish Film Institute is also behind The Square, which won the Palme d'Or in Cannes (and is here at the Festival), as well as TIFF's Opening Night movie, Borg/McEnroe.

Olena Decock: I'm excited for something that's new this year: the Foundations programme. Whether you’re an emerging filmmaker or have a few films under your belt already, these are the sessions you can't miss. They're practical, "how-to" orientated, and are here to help you find the tools to make your next film. I'm also excited to see the master class with Mary Harron [director of Alias Grace], who will be interviewed onstage by Patricia Rozema [director of I've Heard the Mermaids Singing]. They're two women who have dedicated their careers to talking about the female gaze and female sensuality.

Karina Rotenstein: I also want to highlight a panel on building Canada's Indigenous Screen Office. Last year, we did a session called “Pathways and Protocols: Collaborating with Indigenous Communities” that included Zacharias Kunuk, Jesse Wente, imagineNative and the New Zealand Film Commission. In one short year, Canada has created its own Indigenous Screen Office, led by imagineNATIVE’s Marcia Nickerson. Nickerson, with fellow partners Valerie Creighton from the Canadian Media Fund and TIFF's own Danis Goulet, will talk about creating a new business model and a new sector. Their model is innovative in terms of what people can do by working within a system in order to blast it open to create a new business sector.

__Which films should we get excited to see at the Festival? __

Kathleen Drumm: Luca Guadagnino's Call Me By Your Name is one of my favourite films this year. It's an exquisitely painful love story set over one long, hot summer, handled in a beautiful, poignant, and moving way. I'm so excited that Luca, Armie Hammer, and Timothée Chalamet will be onstage at the Industry Conference talking about the film.

Karina Rotenstein: Mine would be The Death of Stalin. If you love Veep like I do, you’ll love the way that showrunner Armando Iannucci takes on this historical event — the scramble and fight for leadership after Stalin’s death. It’s well-researched and very funny, with a stellar ensemble cast. He's just the master of satire.

Olena Decock: I understand through whispers in the hallway that The Florida Project is a must-see. I'm also a massive Alan Zweig fan, so I cannot wait to see his new film, There is a House Here, as well.

Lastly, if you're going to the TIFF Industry Conference, what should you be prepared for?

Olena Decock: Be prepared to eat cocktail food at the Industry Happy Hour, and be prepared to book off your entire Tuesday, September 12 to dedicate the day to documentary industry programming, programmed by Dorota Lech.

Karina Rotenstein: Get ready to laugh and think, because we've got Armando Iannucci, Larry Wilmore, and Morgan Spurlock. I would also say “dream,” because cinema is an imaginative art form, and there is a lot of programming to ignite your imagination.

Kathleen Drumm: Get ready to learn, be inspired, and to meet some really great people. Don’t forget your business cards! Practice your pitch — and if you’re a filmmaker with a film in the Festival, you’ll need to focus not just on right now, but also on the future, as the reality is that many of the conversations you’ll have will be with people who ask, "So… what are you doing next?”

__TIFF’s Industry Conference will run from September 8 to September 13, with a full day devoted to documentary programming on September 12. The conference is accessible to those with a Conference and/or Press and Industry Pass at the Festival. (You can also buy a special pass to access the Doc Conference.) For regular updates, head to the TIFF Industry website and follow them on Twitter at @TIFF_Industry. __