Director Angela Robinson on the dominance of DC's lasso-wielding hero 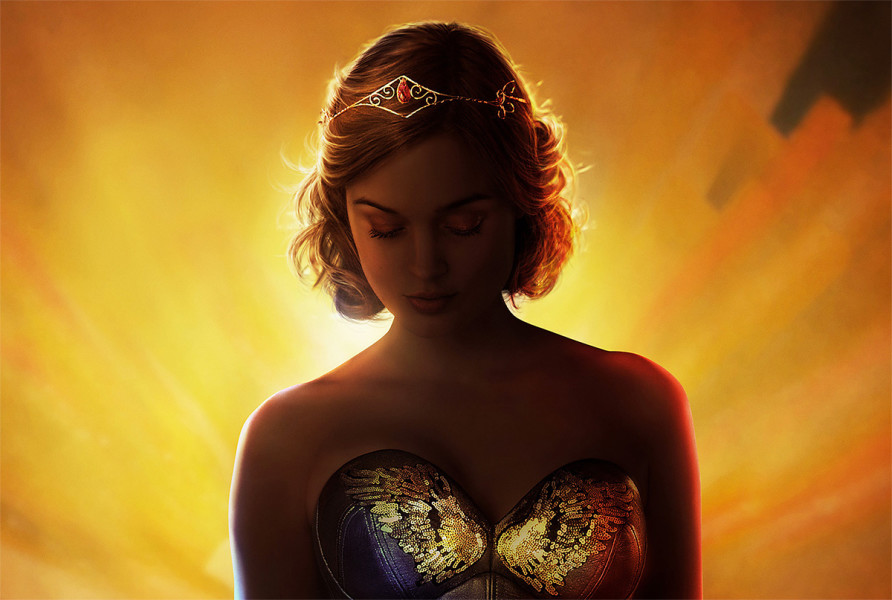 William Moulton Marston (Luke Evans), an American psychologist, put his progressive ideals about female liberation into practice by creating the DC superhero Wonder Woman in the 1940s — all while living in a polyamorous relationship with his wife (Rebecca Hall) and another woman, Olive Byrne (Bella Heathcote).

TIFF sat down with Robinson for a bracing early–morning chat about female desire, bondage, and Wonder Woman’s dominance in an overwhelmingly male genre.

TIFF: What film made you want to become a director?

Angela Robinson: All That Jazz.

Fosse! Are you a musical theatre fan?

In high school and in junior high, I wanted to be a theatre director. Well, I wanted to be a movie director first, but my school didn’t have a film program, so I got really involved in the theatre program. My drama teacher would show us all these movies, and a lot of them were musicals. I remember watching All That Jazz and I was just blown away by the music, but also the storytelling.

Actually, it was kind of a direct inspiration in Professor Marston & the Wonder Women, in that I thought of the movies structurally. They’re incredibly different films, but the idea of a man who is dying, and being interrogated about the choices he’s made in his life. And showing his relationships with the women in his life, and how he’s been called to task for the choices he’s made — that was an organizing principle when I started writing Marston.

All That Jazz is so editor-reliant. Are you attracted to films that require a great deal of collaboration with your editor?

Yes! I started in editing; if I wasn’t a writer or director, I’d definitely be an editor. I still love that. I worked with this brilliant editor named Jeff Werner on this film. But I definitely come at the process — even in my writing — always thinking about the editing of the film.

For you, is editing just a different type of writing?

A film teacher once told me that you write the movie three times: when you write the screenplay, then again when you direct it, and again in the editing room. That kind of moving-making exercise is pure for me in that it’s about making meaning. I’m always fascinated by how you can juxtapose two different pieces of film that have been shot at different times, on different days, or from different edits, or in different states of mind, and you can literally create meaning, how flexible it is. 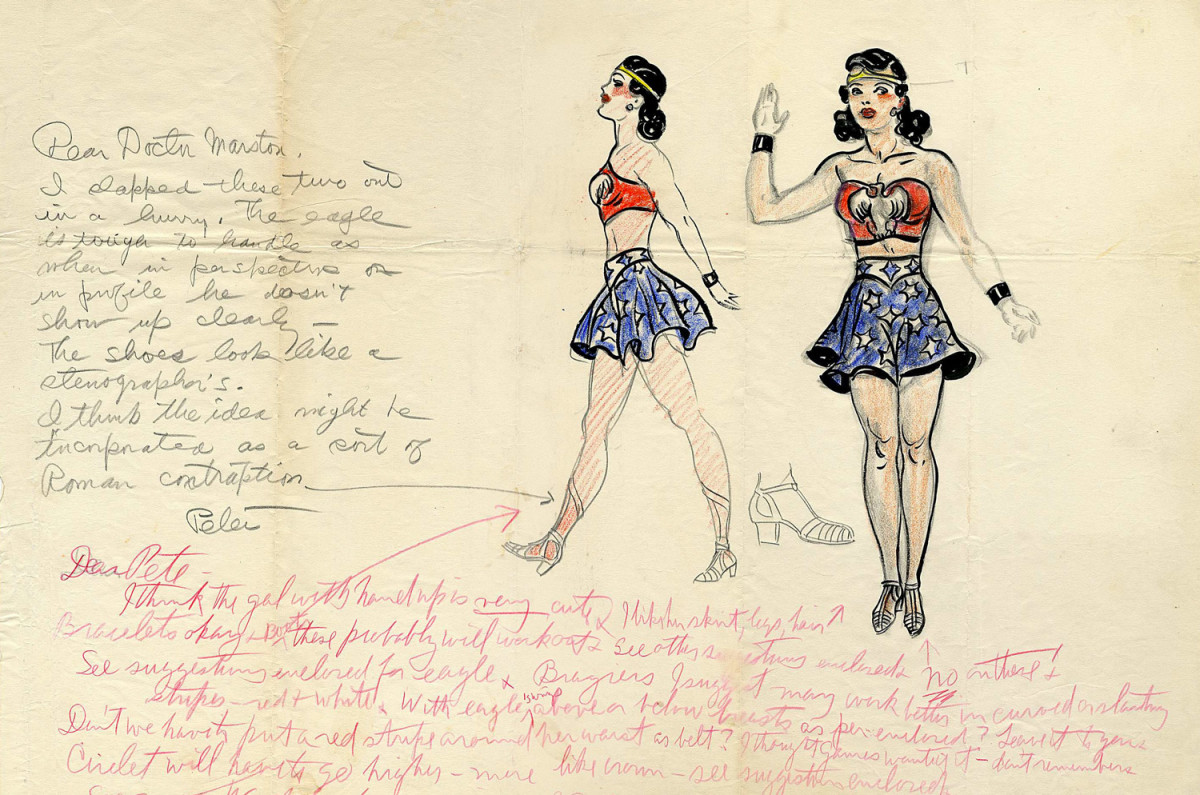 The first sketches of Wonder Woman by Harry G. Peter with notes from Marston

Speaking of juxtaposition, Wonder Woman is so much about individualism, and freedom, and independence. It’s such a contrast with its S&M origins. How do you feel that William Marston’s worldview reconciles these seemingly very disparate things?

That was one of my questions going into writing the movie. It seems like those two things are at odds: feminism, and his theories on bondage. But is it a contradiction? Is Marston a feminist? Ultimately, through spending many, many years thinking about it, I feel like they’re not at all irreconcilable.

Marston’s message was simple: he found freedom and independence through the idea of submission to happiness, to love. He used bondage imagery as a metaphor, but his message was that you should submit to what he called a “loving authority,” basically as a way to find peace and happiness. Psychology was a fairly new science when he started. He really thought you could change the world with your ideas — that the path to peace is in changing how you think about things. Ultimately, I don’t think that those ideas — to him, especially — were irreconcilable at all.

Thank you. I’m proud of them!

I want to talk specifically about a moment in the film when Bella Heathcote is flogged while Rebecca Hall watches. How do you approach representing female desire cinematically, in this scene, but also on the whole?

That’s the best question I’ve had this whole time and people ask me a lot of questions. I am very interested in exploring and representing female desire on screen, which I feel is so under-explored and under-represented — or even thought about.

To me, it was really important that the film represent all three of their perspectives. You couldn’t tell a movie about Wonder Woman without exploring the lives and the psychology of the women who inspired her. The film hands off the POV: first, you meet Marston, then it hands off the POV to Elizabeth, then to Olive, and then it cycles. They were psychologists: what's way sexier than seeing what people do to each other is seeing people are thinking.

I first wanted to make what was happening to them a really accessible love story. I didn't want to Otherize their experience at all. I wanted to capture what it feels like to be falling in love, and I wanted to explore his ideas about dominance and submission. His ideas are in every interaction. So, the lie-detector scenes are also about sex, and the sex scenes are about freedom and Wonder Woman. 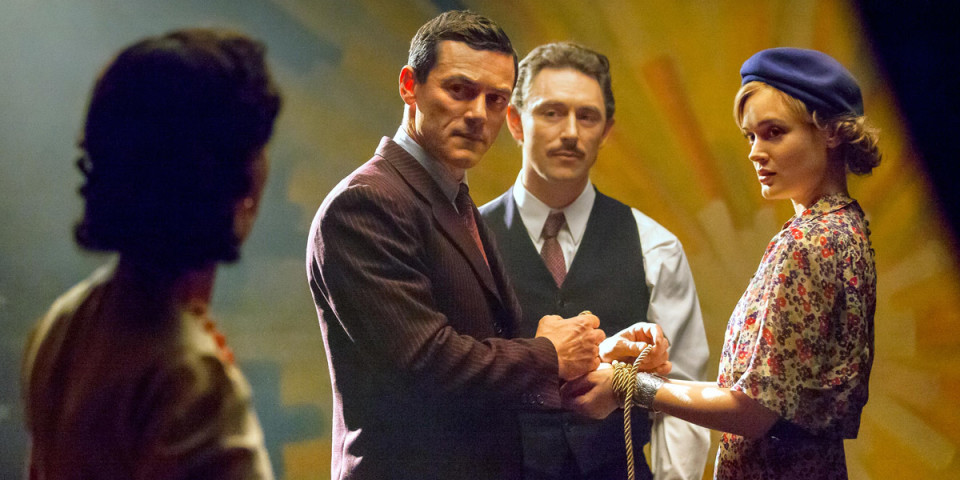 __Do you think that films about sexuality and sex are inherently different if they have a female creator? __

I have no idea. (Laughs) Honestly, I don’t know if there’s even been enough of them to form a working theory about that.

__I feel you on that one. But what do you think is unique about the female gaze, which we can now start to see in cinema, now that women are making headway? __

I don’t know if that’s “female” at all, but I was very engaged, especially between the women. Male–female relationships have been explored at length, but there’s so many variations, from friendship to sex, in female relationships that are endlessly fascinating and very complicated.

Wonder Woman is nearly a century old. Why do you think she is back in the cultural conversation now, and so warmly embraced?

People need a new narrative. I feel like our world is… in peril. (Laughs.) It’s obvious to me why Wonder Woman is such a huge hit: she has a different message. She’s the superhero Marston created deliberately to stop war, create peace, and to bring love and peace to the world. People are very hungry for that right now.

The Risky Business of Patty Jenkins