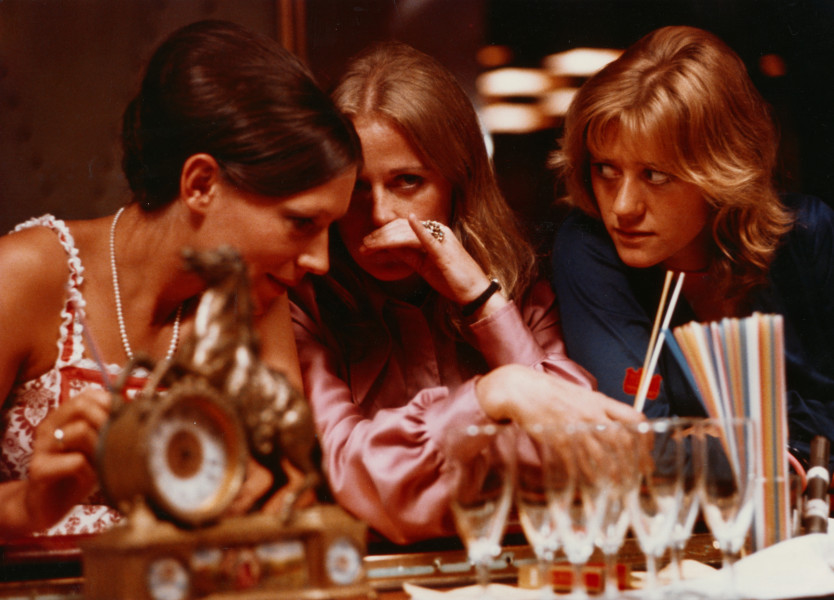 Sharing Her Journey Since 1976

A history of TIFF’s Womanscene programme, which put the spotlight on female directors way back when

In 1976, the Festival of Festivals, the future Toronto International Film Festival, launched with a selection of films which co-founder Bill Marshall said was second only to Cannes in volume. (By contrast, the 1976 New York Film Festival only showed 19 films that year.) Of the 120 films that played in its inaugural year, the Festival’s Womanscene programme boasted 40 features and shorts, making films directed by women roughly a third of the overall programming.

Described as “Films by women about women,” the Womanscene spotlight was intended to be “a collection of features and short films in concert with personal appearances by some of the most important women working in film today.” The series was curated by local scholar and cineaste Barbara Halpern Martineau, who had been one of the organizers of the Women’s Studies program at the University of Toronto and had helped program the Women’s Film Festival in New York City. At the time of Womanscene, she was currently teaching a class on “Women’s Films” at York University. (Fun fact: York University actually suspended their classes for the week of the Festival so that students could attend.) Martineau paired short films by emerging filmmakers with features, creating a programme of “documentaries, fiction films, dramaticized documents, semi-documentaries, animation films, films that can be called ‘realistic’ or ‘surrealistic’ films, films made collectively by all-women crews, with men, by a single woman, within the industry, independently, for institutions.”

During a press conference conducted at the time of the Festival’s programming announcement, Martineau said she had found an embarrassment of riches. “Originally I was asked to gather a couple of women’s films, but it grew just like topsy. All but two of what we’ll be showing in this program are Canadian premieres and at least three North American premieres. I had to cut out a lot of films. So many women are making features and shorts — but very few people know about them around here.” 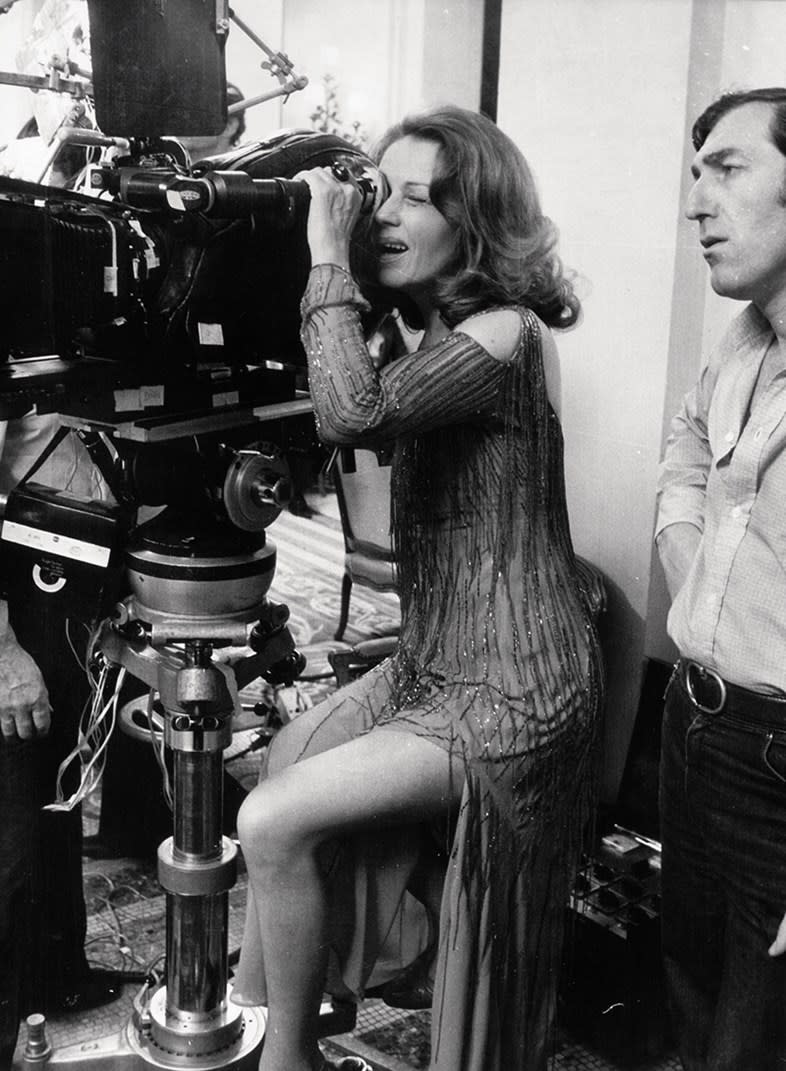 A photo of Jeanne Moreau directing her first feature Lumière, which premiered at the 1976 Festival of Festivals.

Those women included the legendary French actor Jeanne Moreau who, at the age of 48, premiered her directorial debut Lumière as a gala at the Ontario Place Cinesphere on October 21, 1976. A semi-autobiographical film made for $600,000 about the lives and loves of French actresses, the film was touted as one of the best of the Festival, and was described by Toronto Sun critic George Anthony as: “A tour-de-force for Ms. Moreau… As a director, she brings unusual clarity and perspective to her study of four women whose needs and desires are different but the same.”

Womanscene also included works by filmmakers who would later form the pantheon of international art cinema. The documentary The Other Half of the Sky: A China Memoir, co-directed by Claudia Weill and actor Shirley Maclaine saw Maclaine exploring China’s changing gender politics during her visit to the country in 1973. (It would later be nominated for an Academy Award for Best Documentary Feature.) Canadian filmmaker Deepa Mehta (then Saltzman) screened one of her early shorts, At 99 — A Portrait of Louise Tandy Murch, a genial portrait of a woman embracing her age. Hungarian filmmaker Márta Mészáros (who became her country’s first female director with 1968’s The Girl) premiered her second feature, Adoption, a sensitive story of female friendship. Chantal Akerman showed her commanding Jeanne Dielman, 23 Quai du Commerce — 1080 Bruxelles, while new works by Joyce Wieland (The Far Shore) and Marguerite Duras (India Song) also debuted. 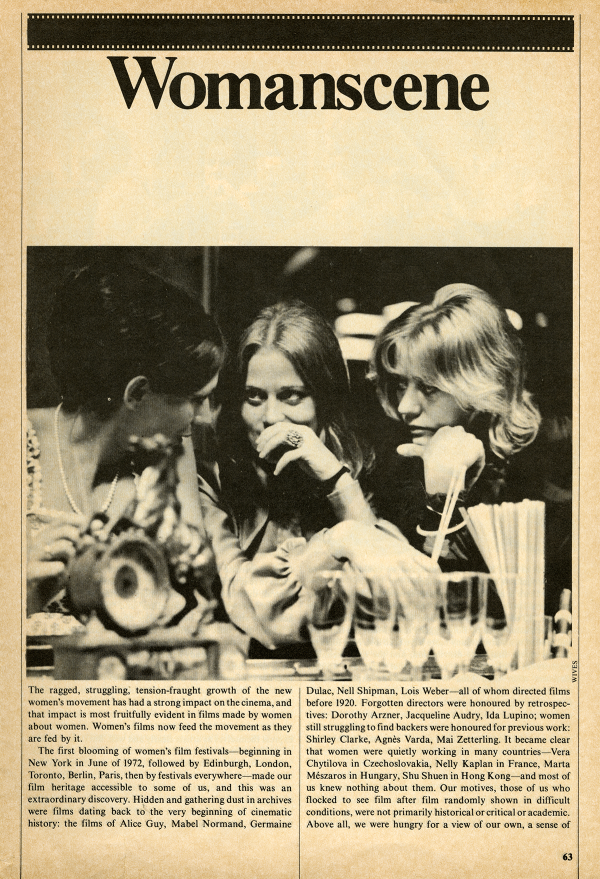 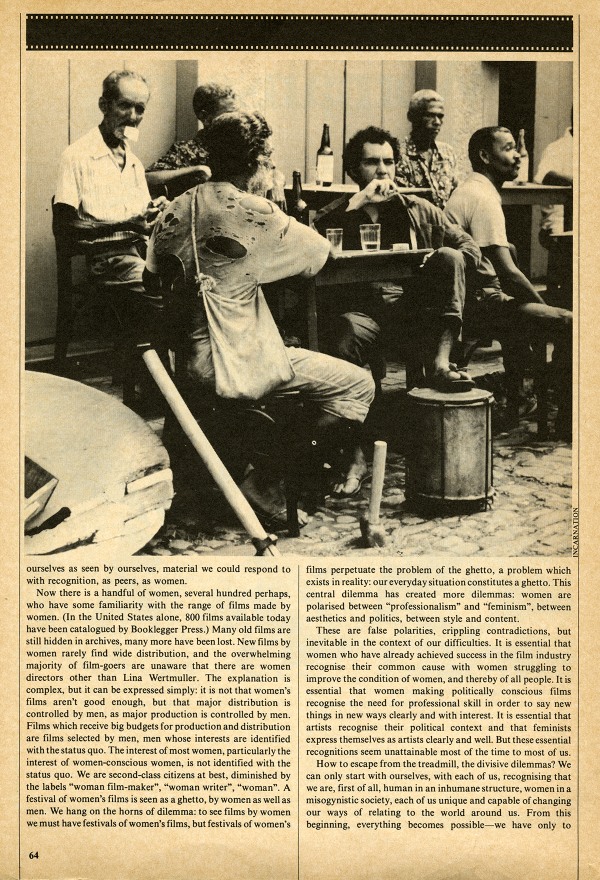 While some artists elected not to be programmed in Womanscene, reluctant to be relegated to the category of “female filmmaker,” films made by women remained at the forefront of the 1976 Festival of Festivals. Quebec’s Anne Claire Poirier premiered her first feature, Le Temps de L’Avant, in the Canadian section, while Barbara Kopple’s Oscar-winning work about the Brookside mining strike, Harlan County, USA, premiered in the documentary program. Special guest attendees at the Womanscene conference included Chicago feminist film critic Julia Lesage, French critic Claire Clouzot, as well as the chief organizers of the New York Women’s Film Festival. 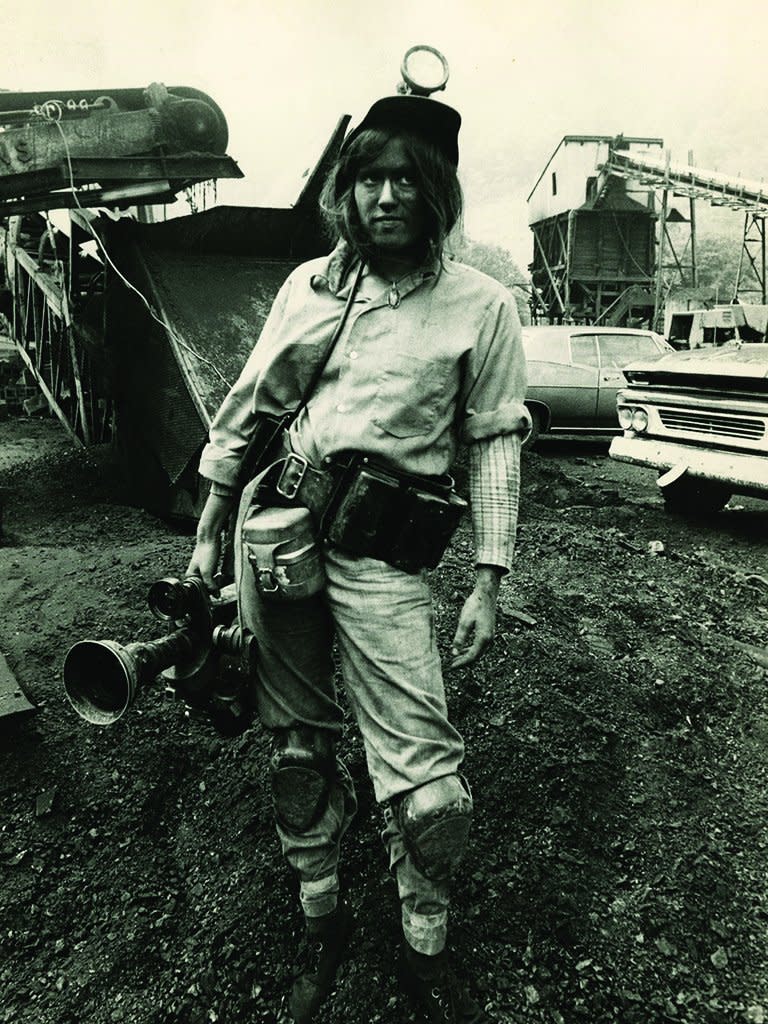 Filmmaker Barbara Kopple during the making of Harlan County U.S.A. (1976).

Naturally, a spotlight on women’s cinema was not without controversy and some blowback. Norwegian director Anja Breien’s social satire Wives, designed to be a feminist take on John Cassavetes’ Husbands, drew fire after the film’s publicist described the three female leads as experiencing “a free and liability-less life that is a man’s privilege and prerogative.” US filmmaker Martha Coolidge, whose next picture would be the 1983 comedy Valley Girl, restaged her rape at age 16 in Not a Pretty Picture. The film used a combination of cinematic devices, including narrative reenactments and documentary footage of the film’s rehearsal process, to question how we can portray the experience of sexual assault.

Coolidge, who deliberately cast lead actor Michelle Manenti because she had also been a teenaged rape victim, conducted many candid interviews about her film at the Festival, yet reception was, at best, mixed. Wrote New York Times critic Richard Eder in a confused 1976 review: “Miss Coolidge is plainly making the fiercest possible denunciation of rape … there is too much failure for this to be anything but a badly flawed film. But in its best moments it is troubling, subtle, and very affecting.” 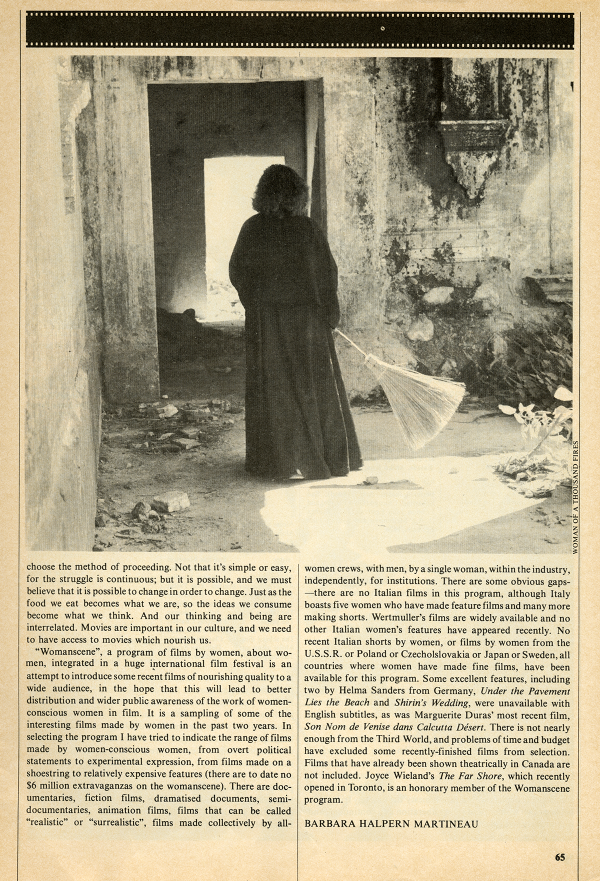 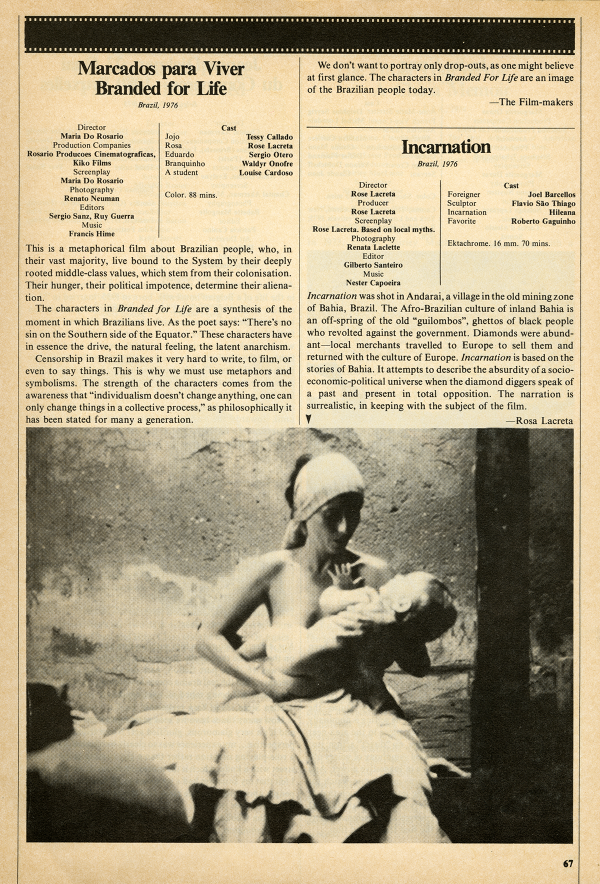 The complicated nature of how films made by women should be seen and evaluated was expressed in a 1976 editorial written by Martineau. Writing for Chatelaine’s Focus section, the programmer described the problems female filmmakers face in the industry upon critical reception and distribution of their work. The well-articulated piece still rings true today, even as we enter a time with increased visibility for women behind the camera.

Wrote Martineau: “There are the major film festivals, marketplaces or showcases for films from all over the world, where distributors and the press decide the fate of the movie-going public. At most of the festivals, of which Cannes is the most notorious, women’s films are relegated to the fringes, if they are shown at all. Very very few are picked up for general distribution. Only at festivals of women’s films has there been a truly broad sampling of the work done by female directors.” 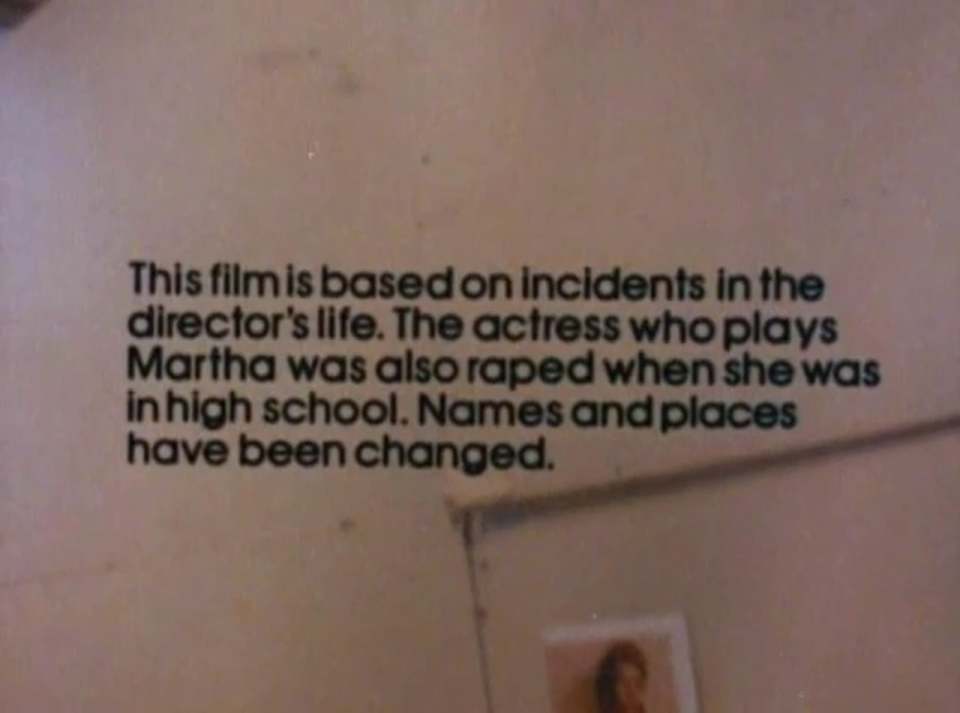 “The fact is that most films which reach the general public are directed by men, financed by men, and concerned with male lives and problems. Of the feature films directed by women, and there are increasing numbers of these, only those who focus on a central male character, and that are not threatening to delicate male sensibilities are allowed to reach a wide audience. (Example: Lina Wertmuller’s Swept Away.) Talented women directors such as Agnès Varda, Nelly Kaplan, and Marguerite Duras in France, Joyce Wieland and Mireille Dansereau in Canada, Joan Silver and Elaine May in the US, women who manage to raise the money to direct feature films, find that their work is ignored, attacked, poorly distributed, usually on the grounds that it’s not good enough, or the subject matter is ‘trivial’.... ‘Serious’ films that don’t offer these attractions compensate by concentrating on men, who are, after all, the only subjects worthy of ‘serious’ attention. It’s not that women directors aren’t allowed to make films — it’s just that films that take women seriously aren’t taken seriously by the men who control the film industry.”

Womanscene ultimately received a mixed response. An article published in the Toronto Star was titled “Women’s movies were excellent,” while an editorial in the University of Toronto student newspaper The Varsity featured the headline “Overt feminism leads to boring women’s films.” 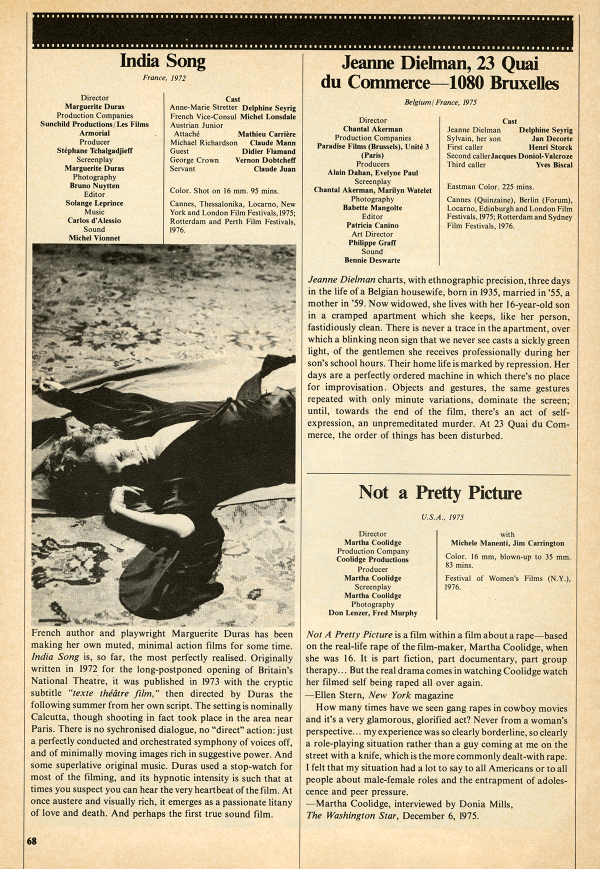 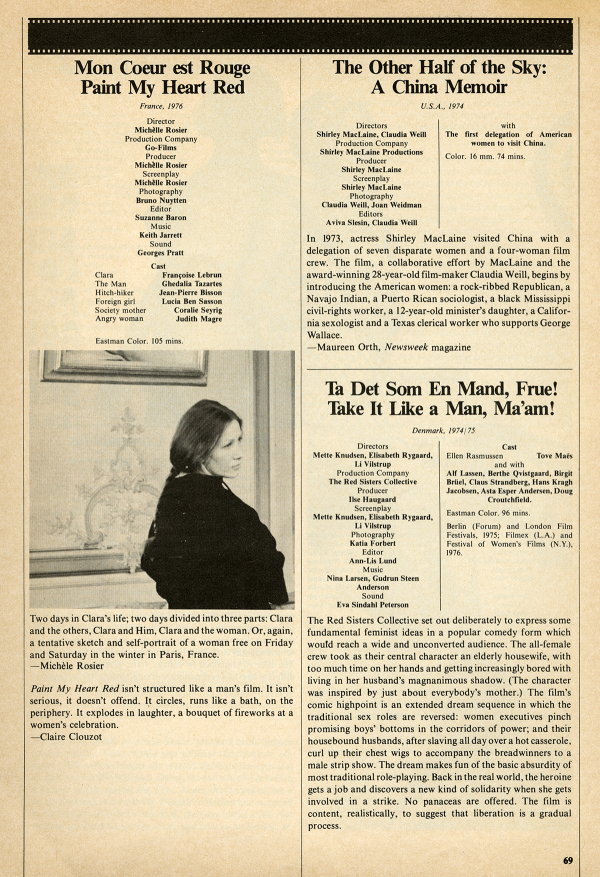 In her piece, Varsity writer Karla Mengele questioned the need for a specific programme of female-only directors, asking whether it meant these films needed to be evaluated separately from works either directed by men or co-directed by women. “Does it mean these films are only of interest to women?” wrote Mengele. “[Womanscene] links the inherently political struggle of the women’s movement… only to become a social battle that becomes divisive.”

While the Festival of Festivals would blossom into the Toronto International Film Festival, the Womanscene programme was curtailed in 1977, due to the issues Mengele highlights in her piece. In a Screen International article published in January 1977, Festival co-founder Bill Marshall offered by way of explanation: “We’ve had enough militant feminism for the time being. There will still be important films by women, but we can’t afford to have one group saying this is an exploitative male festival….” 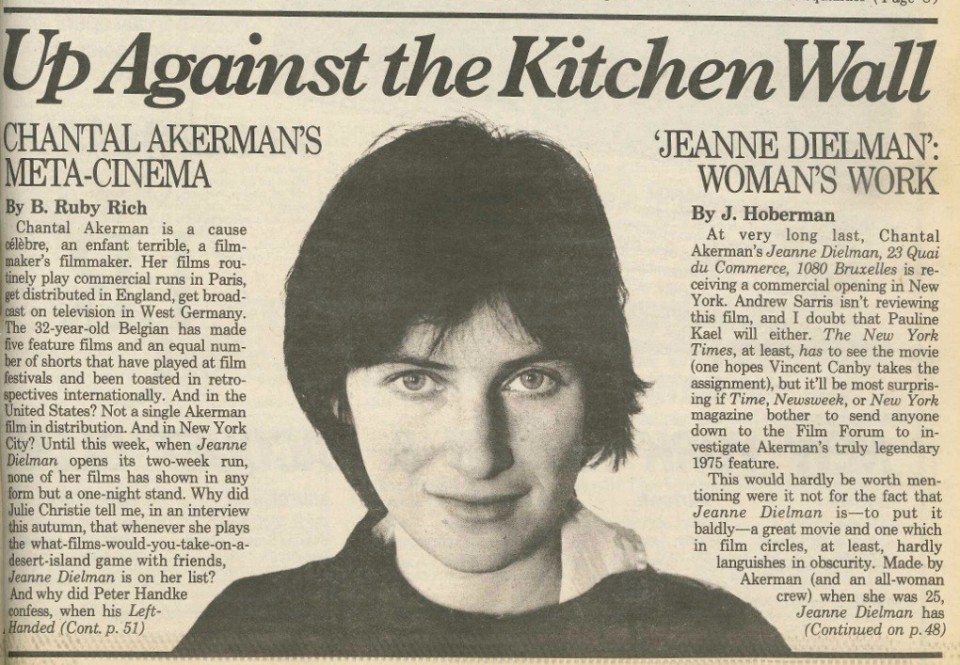 Even Martineau addressed the conflicting nature of being a “female filmmaker” in a robust programming essay for Womanscene, writing: “A festival of women’s films is seen as a ghetto, by women as well as men. We hang on the horns of dilemma: to see films by women we must have festivals of women’s films, but festivals of women’s films perpetuate the problem of the ghetto, a problem which exists in reality: our everyday situation constitutes a ghetto. This central dilemma has created more dilemmas: women are polarised between ‘professionalism’ and ‘feminism,’ between aesthetics and politics, between style and content.”

Forty-one years later, that same dilemma persists. While TIFF has continued to have a long tradition of programming influential works by female filmmakers, including the films of Claire Denis, Agnès Varda, Nicole Holofcener, Ava DuVernay, Catherine Breillat, Kathryn Bigelow, Lynne Ramsay, Sarah Polley, Amma Asante, Sally Potter, among many others, the need for advocacy and increasing resources for female filmmakers (as well as queer filmmakers, filmmakers with a disability, and filmmakers of colour) remains of paramount concern. Whether by hiring more female programmers or creating a mandate to include more films by women that stand on their own merit, institutions such as TIFF are looking inward — as well as forward — as to how they can shape the future of women in film. Perhaps that means broadening programming efforts to mobilize a community, so that the work made by women can become more than just a scene.

At TIFF ’17, the Festival finally regained its ratio from 1976 — one-third of programming (33.6 per cent) was directed by female filmmakers. If you are passionate about contributing to the next generation of women in film, you can donate to raise resources and advocacy through TIFF’s Share Her Journey campaign.

Women in the director's chair at TIFF '17

A Mandate to Change