What You Wear to Make a Movie

Chandler Levack, writer/director of the TIFF '17 short We Forgot to Break Up, shares her obsession with filmmaker's wardrobes

As long as I’ve been obsessed with film, I’ve been obsessed with directors. To me, nobody looks cooler than when they’re holding a Panavision camera and wearing a light, rainproof jacket. Directors are my rock stars with looks I’ve long tried to emulate. After seeing Rushmore for the first time at age 13, I became obsessed with Wes Anderson’s corduroy suits, clear bifocals, and New Balance sneakers, which I still hold up in my personal pantheon of flawlessness. Looking at pictures of Wes Anderson and yeah I know, Woody Allen, I knew I wanted to be a filmmaker.

Classically, directors always looked like John Ford, surveying his kingdom from the purview of his director’s chair, wearing sunglasses, a finely pressed suit, and a beret. Directors in the golden age of Hollywood were considerered artists (as well as businessmen), so it was important for them to look as artistically authoritative as possible. However, once the new class of California film school grads and dropouts (Steven Spielberg, George Lucas, and Francis Ford Coppola amongst them) emerged, the look of a director quickly gravitated towards comfort. Suddenly, it was okay to wear a tanktop and cut-off jean shorts on set, and these bearded manchildren were entrusted with millions of dollars. 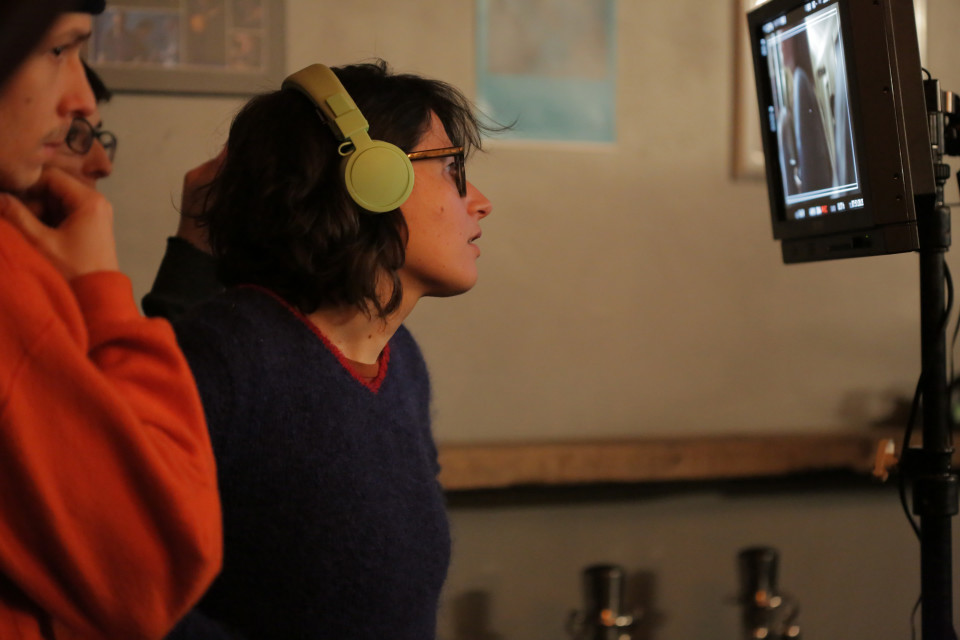 The author on set of her first short We Forgot to Break Up (TIFF '17), opting for a casual v-neck and pastel headphones.

There’s a photo of me in my high school yearbook. I’m 16-years-old and standing on the roof of my high school with my parent's video camera, filming our school's annual Terry Fox Run for the video yearbook. I am wearing a tan blazer from American Eagle and my dad’s baseball cap. Why? Because if you’re gonna make a movie, you need to dress like Steven Spielberg.

I still dress like Spielberg on set, wearing jeans, a t-shirt, sneakers, and a brown baseball cap — which friends and ex-boyfriends have christened my “director’s hat.” I dress up in UCLA drag because when people wanna know who the director is, they can point to the five-foot-two girl dressed up like Steven Spielberg and say, "Ahh yes, the director is here." In real life, I’m a twee #AF stand-in for Zooey Deschanel (if she was constantly covered in weird stains.) But when I'm making my art, I’m serving up George Lucas realness 24/​7.

I love the idea of slipping into costume to make a movie. It affords you a certain kind of magic. We associate directors with their blank ballcaps and hangdog expressions. Director fashion is practical, but it’s also incredibly iconic. Everyone looks cooler with a camera in their hand. Everyone looks more powerful when they’re executing their creative vision – you even get a chair with your name on it near the monitor! We fall in love with films because of the people who make them. Filmmakers carry a certain kind of swagger that means, “I’m Penny Marshall and I’m wearing transition lenses, bitch.” Here are some timeless suggestions of what you wear to make a movie. As a sidenote: can someone ask Wong Kar-wai where he got these sunglasses? Because they feel like an integral part of my TIFF '17 lewk, okay? 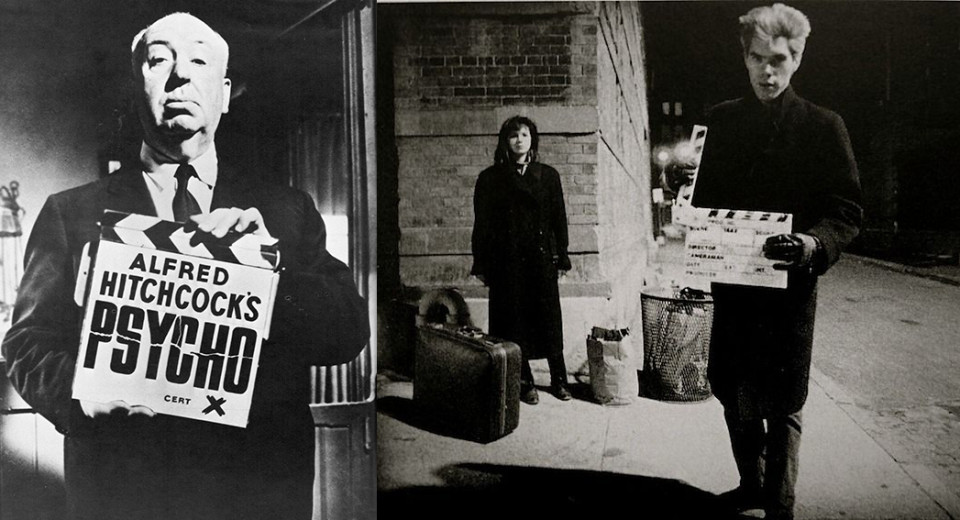 Don’t underestimate the power of a slate to set the tone of your entire production. While Spike Lee (seen here, dressed as Mars Blackmon from his first feature She’s Gotta Have It) has a slate that isn’t exactly great for continuity, it makes a powerful statement about who is making this movie. I love Spielberg's customized Jaws slate, as well as his turtleneck/​aviator sunglasses combination. Meanwhile, Hitchcock's slate captures the entire spirit of his production. And who’s that tall drink of water? Jim Jarmusch accessorizes a monochrome outfit with the coolest accesory possible and looks badass as hell while doing it.

I don't understand how button-ups became the de-facto director uniform since whenever I direct anything, I am immediately covered in massive underarm sweat. David Lynch, seen here on the set of Wild At Heart, opts for a sleek purple number. Still, let’s take a page from Sofia Coppola, looking immaculately meditative on the set of Somewhere. (Which makes no sense: she's directing a feature film. How is she not covered in her own blood, sweat, and tears?) Those scrunched-up sleeves mean: “I am an artistic genius here to resuscitate Stephen Dorff's career.”

Then there’s Miranda July filming her second feature The Future in a Patti Smith-indebted look so fly, I wanna put it on my visionboard.

You’re making a movie. You’re in the desert, a drafty studio, walking outside one second and back into the makeup trailer the next. Your mom was right when she told you about the merits of layering. These cool directors know how to capture the right slouchy insouciance to get their job done. Do you think Stanley "50 Takes" Kubrick was ever going to set dressed in sweatpants? Do you think Brian De Palma doesn’t know how fly he looks in his monochromatic desert couture? (Remind me to add "Barbour jacket" to my list.) Then you’ve got Wes Anderson filming The Darjeeling Limited in a look that can only be described as "linen day suit/​desert boot fever dream" and my girl Nora Ephron, serving up executive realness with a scarf thrown over her shoulders, just so. You want to gain the respect of 150 people and still make your day? You wanna get Meg Ryan out of that trailer? The answer’s simple – wear layers, get money.

In what might be most endearing trend of all, directors love wearing their own merchandise! The most resourceful understand that if it's free and clean, that ballcap stolen from the Columbia lot is yours for the taking. (Penny Marshall, you minx!) While Steven Spielberg can't seem to stop wearing his own novelty t-shirts, other directors love it too. Here's Clint Eastwood directing on the set of Unforgiven in an Unforgiven t-shirt, looking like the granddaddy to every production assistant in town. Make my day, indeed. 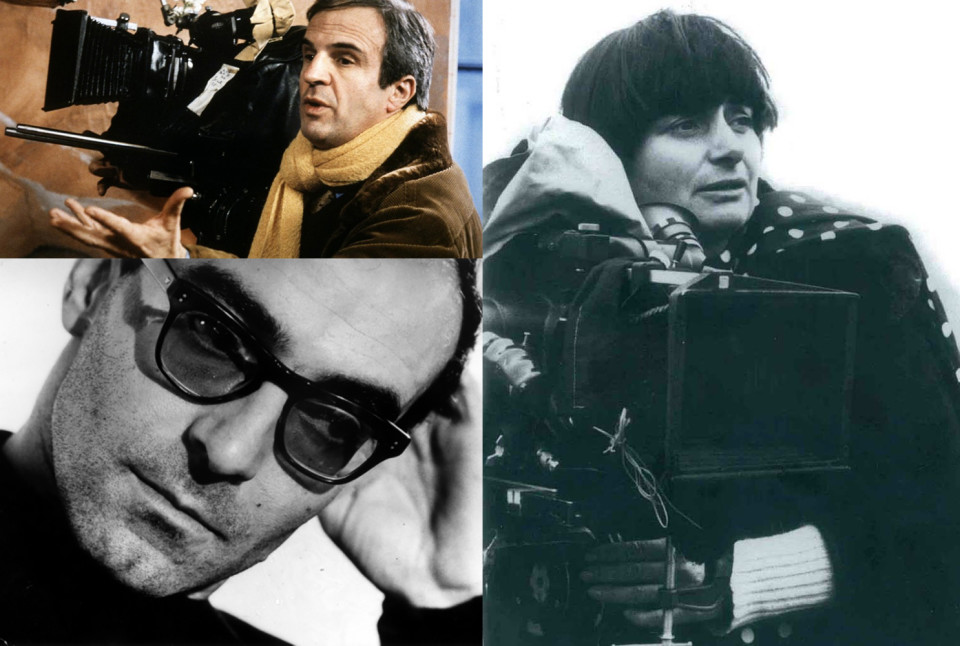 THE FRENCH SCHOOL OF ACCESORIZING

If you think you're going to dress better than a French New Wave director, think again. Every single filmmaker from David O. Russell to Quentin Tarantino has taken a page from François Truffaut, who wore a leather bomber jacket to play a slowly disillusioned director in his movie-about-a-movie Day for Night and never looked cooler. Then there’s Claire Denis in such a jaunty hat and Godard's sunglasses. Lastly, if there is a better image of anyone directing than that photo of Agnès Varda, strike me dead. Because girl just killed it with that polka dot accent. 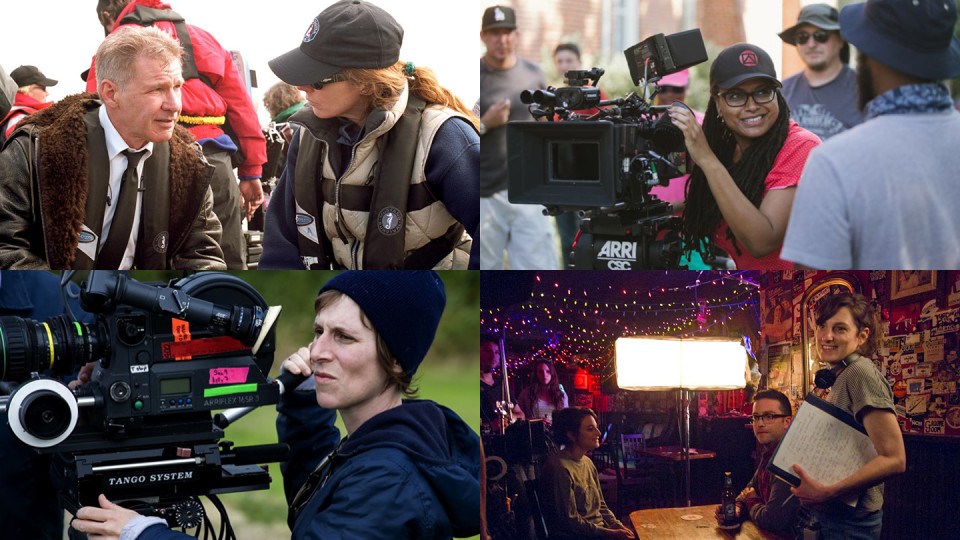 PRACTICALITY CAN BE STYLISH

When we think of directors, we think of Canada Goose jackets, rainboots, ballcaps, and toques for a reason. Making a movie is cold and uncomfortable, in harsh conditions, and with long hours. These images of Kelly Reichardt, Kathryn Bigelow (seen here directing Harrison Ford in K-12: The Widowmaker, playing at TIFF as part of an ongoing retrospective this summer), Gillian Robespierre, Ava DuVernay, and Sarah Polley are cool as hell because these are just women doing their thing. And yes, they happen to be incredibly spectacular at it. For these directors, making a movie runs the gamut between all expressions of feminity, proving that you don't have to dress like a man to do a so-called man's job.

Google any famous director and inevitably there will be a photo of them framing the air with their fingers. The omnipresence of a phenomenon I’m just gonna start calling “director’s hands” can be explained in a few ways. Firstly, directing is literally like creating magic out of thin air, with a mind/​body connection that can’t be underestimated. It’s all about performance and you are your production’s most crucial lead. When trying to communicate both the visual element of the camerawork and the emotion needed from your actors, a director’s hands suddenly become their most valuable asset.

Think about it: everyone else gets a camera, a boom mike, a cool prop, or a clipboard, but you’re just standing around at craft services waiting to call “action,” trying not to put another muffin in your mouth. Think of what can be expressed with a hand gesture – camera movement, aspect ratio, the frame itself, an eyeline, a perfect sweep of emotion across your lead actor's face. I have nothing but love for these extremely dorky press photos of directors framing imaginary images, as if waiting to capture all the raw potential in front of their eyes.

Sure, "director's hands" can look extremely indulgent and pretentious, but being a director is literally about being as indulgent and pretentious as possible! Which is obviously, why I love it. Orson Welles sure as hell wasn't worried about "the haters" when he played himself in his existential film-within-a-film F is For Fake. Directing is about knowing what you want with the confidence to obtain it, and being comfortable with who you are is a huge part of the equation. So don that baseball cap and pull out your shotlist. Because the most empowering lesson I learned long ago is that no one calls you a director, you call yourself one. Even if it takes a baseball cap to get there.

Chandler's short film, We Forgot to Break Up, plays TIFF '17. Watch the trailer for it below:

We Forgot to Break Up