What makes an Auteur Rock Doc? 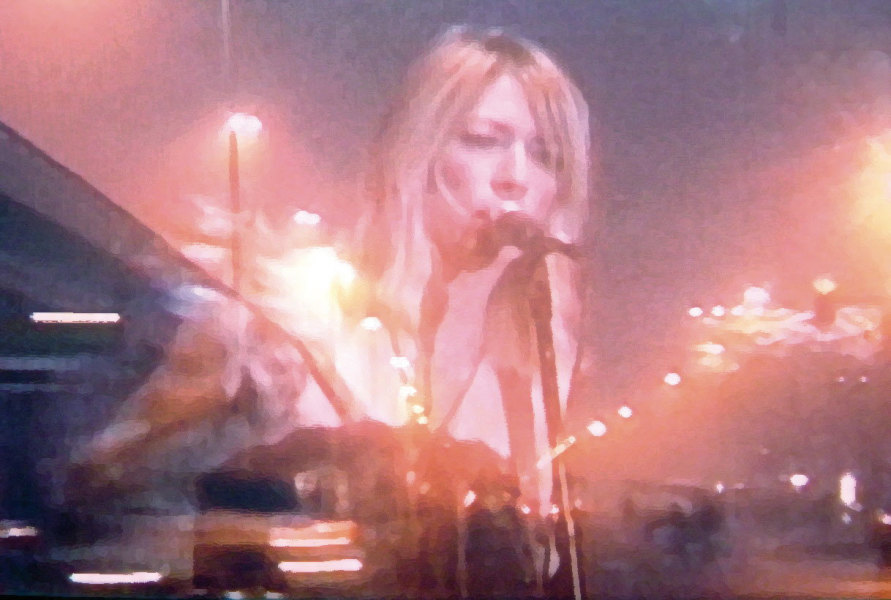 In our ongoing series Deep Cuts, Chris Cummings — a.k.a. Toronto chamber-pop sensation Marker Starling — unearths some of the film songs, scores, and musical moments that have helped shape his love of cinema.

The film opens and closes with an excerpt from American musician and one-time Sonic Youth member Jim O’Rourke’s short film Door, consisting of an image of a half-opened door moving back and forth. The image, which seems to have been shot on a home video camera with an auto-aperture function, keeps being rhythmically washed out by pulses of light, like visual feedback; at the same time, audio feedback is heard in the form of a deeply detailed drone.

The borrowed opening sets the tone for the rest of the film: not only are we going to hear some noise, we’re also going to see some. Not content to simply show the musicians and the stage setting, Assayas begins overlaying images about a third of the way in, at times obliterating the original shot with multiple superimpositions.

By introducing his own vision rather than merely documenting the performance, Assayas positions his film within the tradition of the Auteur Rock Documentary, a canon to which many big-name directors have contributed. Martin Scorsese, a regal figure in this field because of his early contributions to the genre (see below), has contributed films about Bob Dylan (No Direction Home, 2005), The Rolling Stones (Shine a Light, 2008) and a Beatle (George Harrison: Living in the Material World, 2011). Other leading cinematic lights who have dabbled in the genre include David Lynch (Duran Duran Unstaged, 2014), Peter Bogdanovich (Runnin’ Down a Dream: Tom Petty and the Heartbreakers, 2007), and Michel Gondry (Dave Chappelle’s Block Party, 2005). And let’s not forget that before he became a Hollywood director, Lasse Hallström made ABBA: The Movie in 1977 (as well as many, many ABBA videos).

But how do we identify and separate the truly auteur auteur rock docs from those that merely record a performance? How have some directors translated the aural/experiential aspect of live musical performance into a visually (as well as sonically) arresting work? How have they balanced “faithful” documentation of a performance and conscious “artistic” interventions at the level of the filmmaking? And how do these films relate to the long and voluminous history of musical performance on film? 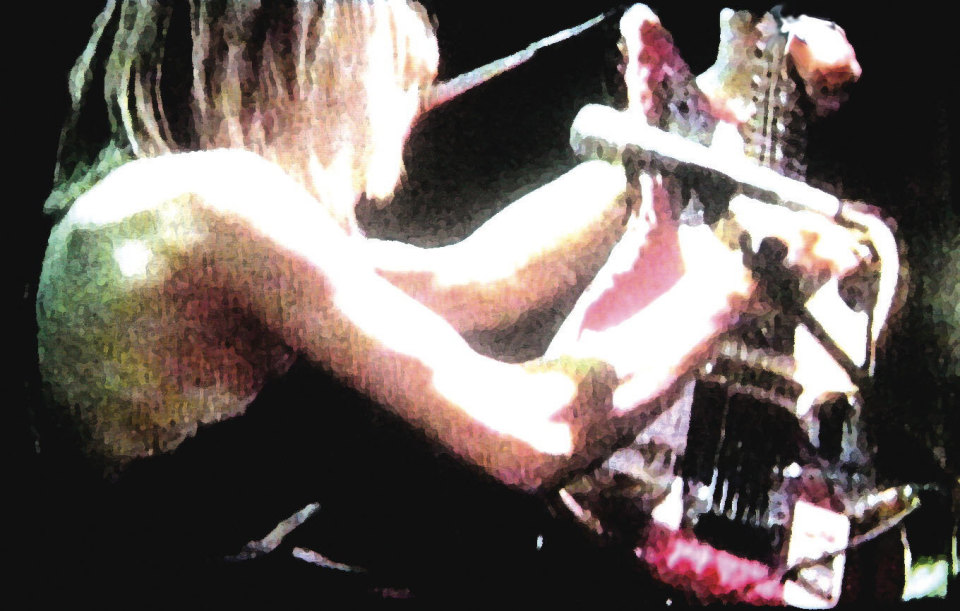 Starting in the early years of TV broadcasting in the late 1940s, The Ed Sullivan Show — its format derived from the then-fading vaudeville tradition — provided a template for documenting musical performances with simple, static camera set-ups.

By the 1960s, the show had begun to incorporate multiple (and moving) cameras, as well as pre-filmed, cutaway inserts, as in this 1964 performance by The Beach Boys.

The Sullivan template gradually blossomed into a glossier and smoother multi-camera shooting style, with The T.A.M.I. Show (1964) and Elvis (a.k.a. “The Comeback Special,” 1968) being two prime examples (as well as fascinating time capsules). This style subsequently became synonymous with the “variety specials” of the 1970s (which seemed to take up endless hours of my childhood television-watching life), and most theatrically released music documentaries notably avoided this approach.

Assayas’ Noise can be located at the intersection of at least three traditions of music-performance documentary filmmaking that largely followed these televisual developments. First, there is the cinema verité style of films like Jazz on a Summer’s Day (1959) and Michael Wadleigh’s Woodstock (1970), with their you-are-there immediacy, the sensation of capturing a singular, unrepeatable event.

Secondly, there is the cinema-specific performance film, as exemplified by that pinnacle of the genre: Jonathan Demme’s Stop Making Sense (1984), which makes the performance itself into a sort of narrative drama as David Byrne and the Talking Heads slowly build the performance from an empty stage with a tape player to an epic, all-hands-on-deck showstopper finale.

In a 1984 interview, Demme draws a distinction between his approach and that of his forebears, which could well serve as the definition of the cinema-specific rock doc: “A concert film may intend … to give you a sense of what it was like to be at an event, the focal point of which was the music. In Stop Making Sense, I'd just as soon it didn't occur to people that they're watching a concert, but rather a band performing without the distancing factor of it being an event that happened once. That's why there's no audience in the film until the very end.”

By pulling the film’s audience directly into the performance — giving the whole cinema a front-row seat, as it were — Demme makes the experience an eternal one, and in the process creates a work so singular that it is virtually a genre of one. In terms of drama and scale, the only true analogue to SMS is a film from a far different musical tradition: Hans-Jürgen Syberberg’s dazzling, Brechtian adaptation of Richard Wagner’s Parsifal (1981), which exhibits a not-dissimilar sense of lighting and staging (the live-performance aspect is absent, however, as the actors were miming to pre-recorded tracks largely sung by others). See below the respective “big reveals” from the two films: Byrne’s re-entry to the stage in the famous Big Suit, and Syberberg’s revelation that the mysterious landscape that has served as the backdrop for the entire film is in fact a reproduction of Wagner’s death mask.

Finally, there is the avant-garde tradition, which had its origins in Andy Warhol’s The Velvet Underground and Nico (1966) and Jean-Luc Godard’s Sympathy for the Devil (1968) — films which seek neither to immerse the audience nor, really, entertain them. Warhol captures a Velvet Underground band jam/rehearsal in unblinking long takes, while Godard treats the repetitive process of The Rolling Stones rehearsing and recording the eponymous title track in a studio setting with aloof impartiality, interspersing it with other fictional material.

(One might also mention here Straub-Huillet’s 1968 Chronicle of Anna Magdalena Bach, a biopic which splits the difference between the verité and avant-garde traditions by largely eschewing dramatic recreations of the composer’s life in favour of live-recorded performances of his music, played on period instruments by actual musicians garbed in 18th-century costume.)

As the Warhol and Godard films attest, by the end of the 1960s rock music had not only become the dominant musical form of the age, but was attracting a degree of cultural prestige and the interest of major filmmakers. The Beatles had begun this turning of the tide with the critical and commercial success of their first feature A Hard Day’s Night (1964), which mixed a witty and inventive fictional narrative with verité-style footage of the Beatles performing at a television studio (albeit the group was actually miming along to pre-recorded versions of the songs).

While the Beatles film put its director Richard Lester on the auteurist map — he went on to direct several highly acclaimed films, including The Knack … and How to Get It (1965), How I Won the War (1967) and Petulia (1968), not to mention the Hard Day’s follow-up Help! (1965) — it was the Fab Four’s friendly rivals the Stones who proved most attractive to more established auteurs. After their dalliance with Godard, the Stones sought to out-Woodstock Woodstock (and Woodstock) with a free concert at the Altamont Speedway, which would be documented by renowned non-fiction filmmakers Albert and David Maysles and their collaborator Charlotte Zwerin.

The result, of course, was Gimme Shelter (1970), which (in)famously ends with the Stones’ horrified responses (which some contend were feigned for the camera) as they watch editing-room footage of the confrontation between Hell’s Angels and audience member Meredith Hunter during the concert, ending with Hunter’s fatal on-camera stabbing.

While this unforgettable conclusion instantly acquired Gimme Shelter a reputation as a cinematic sociological landmark — the supreme document of the “Dark Side of the ’60s,” as opposed to the utopian vision of Wadleigh’s Woodstock — the film is by no means a straight reportage: the extended, slow-motion “Love in Vain” sequence, which inserts a moment of unexpected lyricism into this supposedly bacchanalian Black Mass, demonstrates that the filmmakers were as much artistically responding to the Stones’ satanically majestic performance as they were recording it.

In addition to Godard and Maysles/Zwerin, the Stones have worked with notable filmmakers from all manner of different film practices, backgrounds, and budget levels: avant-garde filmmaker-photographer Robert Frank (the notorious, rarely screened and never officially released Cocksucker Blues, 1972), ’70s New Hollywood underdog Hal Ashby (Let’s Spend the Night Together, 1982), and, most recently, Scorsese (Shine a Light, 2008) — who had got in on the rock-doc game early when he served as second unit director and editor on Woodstock, and ushered in the “mature” era of the rock doc with The Last Waltz (1978), whose reverential treatment of the farewell concert of roots-rock giants The Band made it ripe for parody.

The Stones collaborations raise the question: Who is the true “author” of the rock doc — the artists on stage/on film, or the artist(s) behind the camera? That question is of course easier to answer in those cases where the musicians themselves have directed their own cinematic showcases — e.g., Frank Zappa with the concert film-surrealist freak-out 200 Motels (1971), or Neil Young (in the guise of his directing alter ego Bernard Shakey) with the career-spanning concert film Rust Never Sleeps (1979), which prefigures Stop Making Sense by making stage and performance the focus while keeping the audience offscreen.

Stop Making Sense, of course, is still regarded by many as the high-water mark of the rock-doc genre, and has often been acclaimed as the best concert film ever made. Famously beginning with David Byrne playing solo acoustic guitar to the accompaniment of an onstage boom box (though actually a Roland 808 drum machine played through the mixing board) and adding more members of the band (in its expanded, nine-member incarnation) with every song, along with more and more stage equipment, SMS creates the impact of a booming, long-resonating depth charge — both a metaphor for and a demonstration of the labour of artistic creation itself, from bare idea to fully-fledged production.

This focus on the work of making effortless-seeming music carried through to Demme’s 1985 video for the New Order track “The Perfect Kiss” (shot by veteran French cinematographer Henri Alekan and presented theatrically as an 11-minute short film), which emphasizes the faces of the band members as they furiously focus on their playing.

Assayas echoes this approach in those sections of Noise devoted to the Sonic Youth side projects Text of Light (consisting of SY alum Lee Ranaldo, Steve Shelley, Alan Licht, Ulrich Krieger and Tim Barnes) and Mirror/Dash (Kim Gordon and Thurston Moore), whose fiercely concentrating faces are kept lengthily in frame.

The avant-garde tradition as well features notable examples of the music-as-labour theme. Godard devotes lengthy sections of his Soigne ta droite (1987) to a documentary-like examination of the French band Les Rita Mitsouko’s songwriting process, while in Ne change rien (2009), Portuguese auteur Pedro Costa offers a portrait of Noise alumnus and frequent Assayas collaborator Jeanne Balibar both in and prior to performance, contrasting the sometimes gruelling physical labour and enervating repetitions of rehearsal with the seemingly effortless grace of the final performance.

At the intersection of the mainstream and the avant-garde, David Lynch — with the series of smokily menacing musical performances included in each episode of the new Twin Peaks — has effected an indissoluble blending of the performative and the cinematic as he brings real bands into the fictional orbit of Peaks’ dark universe.

Between Twin Peaks and Terrence Malick’s recent examination of the Austin music scene Song to Song, it seems that more auteurs than ever are interested in the sublime-yet-unpretty world of music and musicians. At one point during the superimposed sequences in Noise, a figure skater appears over all the layered images and remains in frame, seeming to cut through the visual “noise” that has been built up — a reminder that in the end, no matter how noisy, it’s all about grace.

Deep Cuts: "Wild is the Wind"