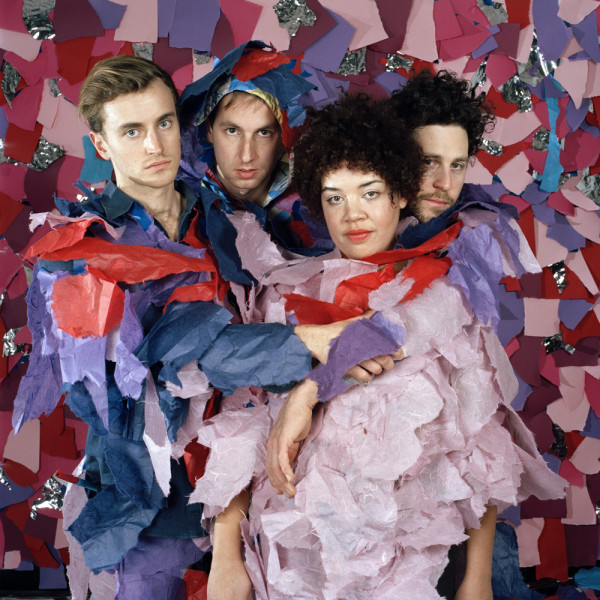 For this edition of The Review, we asked Weaves, one of our favourite bands in Toronto, to let us know what culture they’ve been consuming lately. Weaves played Lee’s Palace as part of Canadian Music Week on April 22. Their self-titled album, which you can buy or stream anywhere, was released on Buzz Records in 2016.

As a band, we can never agree on anything verbally, only musically. With that in mind, we have not attempted to reach some sort of consensus on what our band is into, but rather, what trip each of us is on as individuals. After all, we are halfway through finishing our second record and we certainly wouldn’t want to break the spell by disagreeing about which Rihanna song we can’t stop playing on repeat.

I would say I am interested in a lot of things at the moment. Particularly, feeling spring and summer weather and pulling out my favourite dresses. But for now…

What I'm reading: All About Love: New Visions by bell hooks. I am about 80 pages in so I can't give a complete synopsis, but she is an amazing author, teacher, and social activist. The book is more of an analytical piece, delving into our ideas about what it means to love within the constructs of race, socio-economic standing, gender, etc. It's really interesting, and I highly recommend it.

What I'm watching: I'm currently watching the second season of Underground on WGN America. It's a very intense show about a particular plantation in the Deep South and the struggles of escaped slaves travelling the Underground Railway. The cast is amazing in the show’s hard-but-true depiction of the horrific experiences of those trying to escape slavery.

I am also watching Feud on FX, starring Jessica Lange and Susan Sarandon as Joan Crawford and Bette Davis. It was created by Ryan Murphy, who developed another amazing role for Lange in American Horror Story: Coven. Obviously, there needs to be more directors and producers who are female and, overall, more roles for women past the age of 35. But I think Sarandon and Lange are spectacular on the show. I love seeing them bounce off of each other in the telling of the story of two women who were unfortunately set up by execs and the press to hate each other.

What I'm listening to: I am very much looking forward to the new Perfume Genius record. One single he has released from his upcoming album No Shape is titled "Slip Away," and I love it. It kind of reminds me of Arthur Russell. I also have started listening to the new Kendrick Lamar record, which I'm assuming everyone else is doing. And, I dunno, I just moved into a new place and have been listening to Wilco's Yankee Hotel Foxtrot a lot for some reason. It's nice to listen to with the diffuser going and a book being read. Maybe it's my mind’s substitute for a crackling fire.

I cry when something is good. I get it from my dad, who tears up listening to a Todd Rundgren record. But I don’t show off my tears like I should. I pretend to yawn and wipe them away in order to avoid someone asking me why I'm crying during an Ariana Grande song.

Toni Erdmann was my favourite film of last year, and when I watched it for a second time at TIFF Bell Lightbox, I warned my friend James that I would cry through it. I did. It's about a father's attempt to reconnect with his work-obsessed daughter by adopting a bad wig and an alter-ego, while helping her blow up her life. It’s hilarious, unpredictable, and human. I don’t want to give away too much.

Another one is the HBO series The Comeback. It stars Lisa Kudrow as a former sitcom actress who is staging her big comeback by having a TV reality show crew follow her around. Like Toni Erdmann, it’s a show about how your ambitions can cause you to self destruct when you live without meaningful human connections.

Both Toni Erdmann and The Comeback prove that a good cringe-comedy is best when there’s warmth that the characters choose to ignore. In The Comeback, Lisa Kudrow’s character is in a loving marriage. In a lesser series, her husband would be a mean-spirited loser, and her younger female co-star would be an enemy, not a confidante. It’s best when the cause of the cringe isn’t a screenwriter eager to pile on the misery, but misguided characters who ignore the light and machete towards the dark.

Every day, I wake up and try to listen to some new, unfamiliar music, or stare at a strange string of photographs taken by some preacher in the far reaches of Mongolia with little or no relevance to my life. As comfortable as it is to fall back on my feel-good, typical, nostalgic listening, reading, or viewing material, I carry high the notion of change and challenging what I believe to be the standards of my life. But listening to Chick Corea while I'm making breakfast: that will always be perfect.

Stuff I’ve been listening to includes a bunch of Django Bates. He’s a very unusual UK pianist rooted in jazz, I suppose, who works with larger ensembles in a creative, rambunctious way. I’m also listening to Valgeir Sigurðsson’s new record Dissonance, which will actually be released this week. He’s on the label Bedroom Community with several other innovative composers such as Nico Muhly. Oh, and some Willie Nelson and Shania Twain. The latter is equally as important as any of the other bizarre newfound music because it makes me feel grounded and generally happy.

I don't watch as much as I do listen or read — or eat or sleep for that matter — but lately, I've been frequenting Star Trek: The Next Generation while eating dinner. (Usually, it’s some sort of a stir-fry with as many vegetables as possible.) I mostly like the costumes, the detail of the sets, and, of course, Patrick Stewart. Although this well-established comfort zone is pleasurable, it can be quite boring and unchanging. I went to see Personal Shopper at the Lightbox last night and was a little disappointed. Kristen Stewart was very quirky throughout the whole thing, which intrigued me, and the whole ﬁlm was very unpredictable. And I love the unpredictable! Give that to me!

I, like I assume many people, don’t really have any hard criteria for what I like and don't like. I just want to experience art and entertainment that feels honest, novel, and moves me in some way, in as many different and disparate ways all at once. Here’s some stuff that I dig/have dug/should be dugged upon:

I love Louis C.K.'s series Horace and Pete, which he released last year on his website with almost no promotion. At once deeply heartbreaking and darkly hysterical, this show has it all. There is a real feeling of immediacy in the writing that is so palpable and poignant, as if this show HAD to get made, released, and enjoyed NOW. I’ve never seen anything like it.

Chef's Table is worth the $9-a-month Netflix subscription. It's the intersection between Ramsay's Kitchen Nightmares, Bob Ross, and Ron Fricke's Baraka. Visually stunning, it’s like watching Life on BBC, but all the animals are being cooked. It feels as if every episode is shot and edited to mirror the artistic ideologies about food that each chef possesses. Highly recommended for those who love food or art. (Don't we all?)

Musically, I love Chilly Gonzales. The way he intermingles pop tropes with classical sensibilities, like a clash of low and high art, feels like love and irreverence for both sides. I also just love his greased hair, smoking jacket, hip-hop braggadocio "Fuck you, I rule" attitude — all while he’s sitting at a grand piano. He’s fun.

Mount Eerie's new album A Crow Looked At Me is the most honest and saddest record I’ve yet to hear. Period. I dare you not to cry, it is incredible.

I love a band called Vulfpeck. They seem like the most fun band to be in. Super groovy, dancey, funny, and masterful in their musicianship. They are the new version of The Meters. Check out their performance on The Late Show with Stephen Colbert.

Nina Simone was one of the best. I always find myself going back to this clip of her singing "Feelings," live at the Montreux Jazz Festival in 1976. It’s my favourite live performance ever. It's 10 minutes long, but trust me, you’ll be hooked after 20 seconds. It's riveting.

*Toni Erdmann* is a Film Where Parents Just Don’t Understand