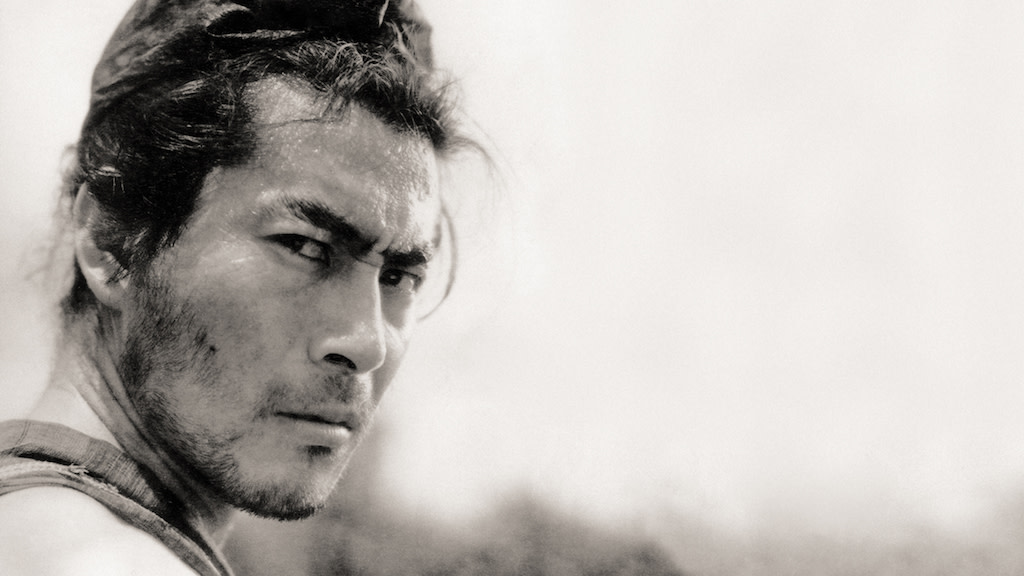 In her Netflix special Baby Cobra, American comedian Ali Wong divides Asian men into two groups — “fancy Asians” and “jungle Asians” — and comments raucously yet wryly on the bodily aesthetics of the former:

Asian men are very underrated. Asian men are the sexiest. They got no body hair from the neck down. It's like making love to a dolphin. So smooth, like slip n' slide... Asian men: no body odour. They smell like responsibility.

Toshiro Mifune, the great Japanese actor and muse of Akira Kurosawa, was no slip n' slide dolphin. In most of his roles, he was no fancy Asian: he was a jungle Asian, shockingly hirsute and disturbingly virile. As the lying bandit who violates a samurai's wife in Rashomon — which marked my first encounter with Mifune, when I was a young undergrad at the University of Toronto watching Kurosawa’s landmark film in unrestored black and white on a distant screen in Robarts Library — he gives off a whiff of something distinctly other than responsibility. 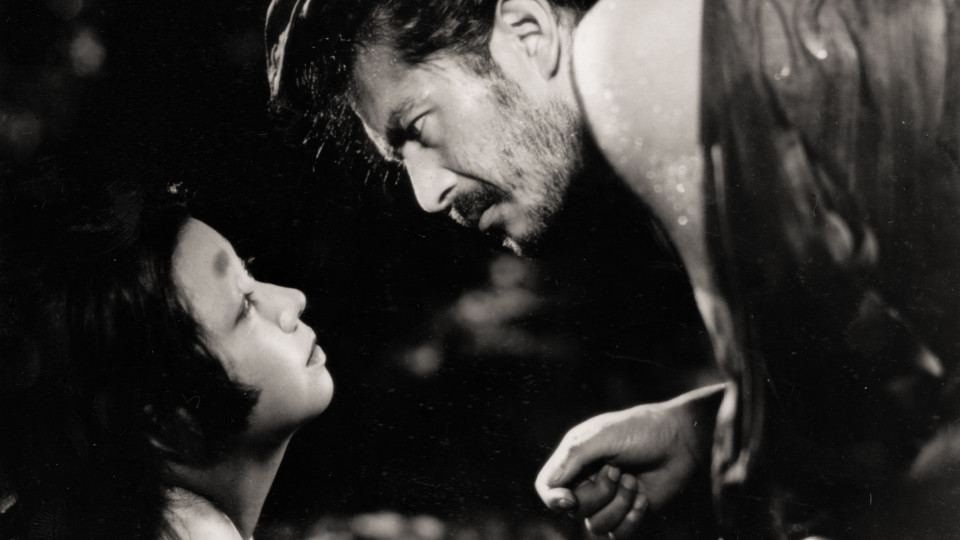 In Stephen Okazaki's 2016 documentary Mifune: The Last Samurai (not to be confused with the Tom Cruise film), Martin Scorsese remarks that Mifune actually studied the movement of lions in developing his signature performance style. Kurosawa recalls witnessing Mifune's feral fury in one of the actor's early auditions:

A young man was reeling around the room in a violent frenzy ... It was as frightening as watching a wounded or trapped savage beast trying to break loose. I stood transfixed. But it turned out that this young man was not really in a rage[:] He was acting. When he finished his performance, he regained his chair and, with an exhausted demeanour, flopped down and began to glare menacingly at the judges.

In the opening credits of Kurosawa’s Yojimbo, Mifune is positively majestic in his seething beastliness. He is a pacing animal, his arms elbowing out of his kimono sleeves to scratch himself, looking to pounce out of the cage of the screen. He struts and sweats, snorts and curses. He wears a messy man-bun with fierce pride. The straw rope sandals binding his feet grind the dirt beneath them. He slashes foes on all sides, man-bun askew; his enemies topple or quickly shrink back in fear, desperately calling for Mommy. 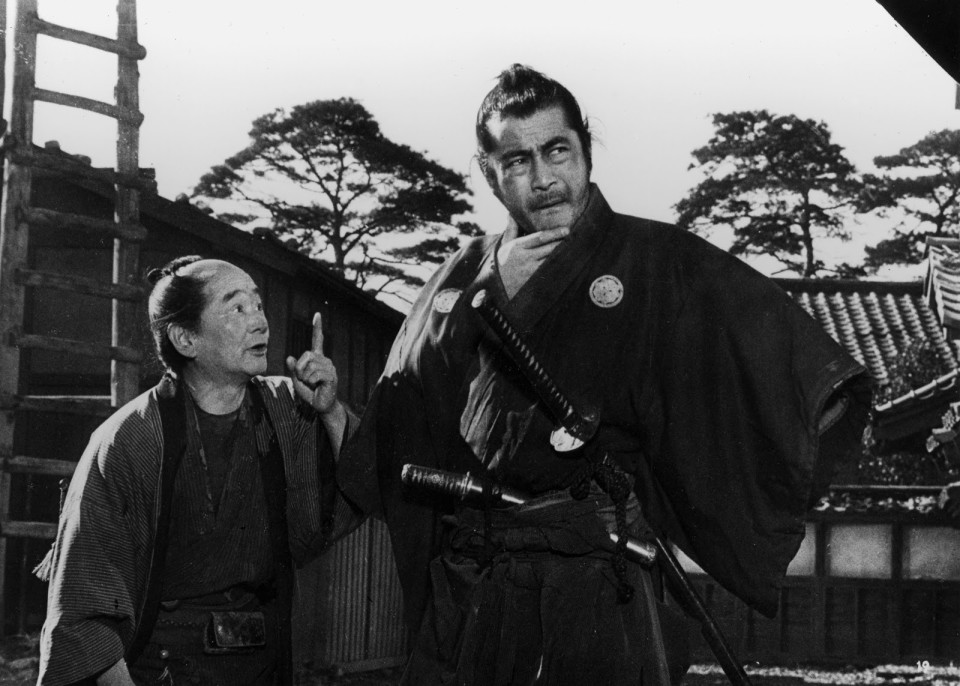 Though I didn't have an Ali Wong to articulate a nomenclature, I knew from the moment that I saw Yojimbo's opening credits that I'd found my jungle Asian. Then, like now, there were few compelling images of Asian men on North American screens, never mind diasporic Asian Americans or Canadians. Asexual, bespectacled sidekicks or mute, wooden salarymen in Amex commercials prevailed. Pungent, corporeal and carnal, Mifune was my first Asian man-crush: he offered the primal allure of my ancient, exotic, and remote motherland of Japan.

But in Kurosawa’s modern-day thriller High and Low, my Yojimbo is transformed. A shadowy figure quietly moves across the screen, switches on the light to reveal himself: shorn of top knot, body fully clothed in crisp white Western attire, Mifune the jungle Asian is now fancy businessman Kingo Gondo. Tarzan has been tamed and brought to civilization, to the city, straitjacketed in a cardigan, his cage a sprawling modern house of glass on a Tokyo hilltop. Yet Mifune’s coiffed hair, finely trimmed moustache, and slashes of brows are inky black, staining the screen. He barks vociferously into the phone, ready to claw his way through the receiver to devour the caller. He may look like a fancy Asian, smell and dress like one, but we get the sense that Kingo of the jungle may at any moment bust out like the Incredible Hulk.

Gondo is a self-made man who has climbed high from lowly beginnings. He has ascended from the buraku, where the outcast or untouchable class lived since feudal times, districts that deteriorated into urban slums in the postwar era. Burakumin were a community of people historically consigned to occupations associated with the taboo of death: from executioners in the feudal era to butchers, undertakers, tanners of animal hides, and shoemakers in the modern. Gondo, we learn, rose from humble cobbler to president of the National Shoe Company, a manufacturer of stylish high heels for urban, Westernized Japanese woman. His life’s trajectory illustrates how modern capitalism in post-occupation Japan trumped taboos that had upheld a caste structure for centuries, eventually allowing even untouchables to enrich and elevate themselves to fancy digs on high.

From the slum below Gondo's white hilltop mansion, a psychotic kidnapper (played by a rabidly handsome Tsutomu Yamazaki, later the star of Juzo Itami’s The Funeral) seethes with envy and hatred in the heat of his ramshackle hut, determined to bring Gondo low, back down to his squalid beginnings. His plan to snatch Gondo’s son for ransom goes awry when he takes the chauffeur’s son instead, but he demands the ransom all the same. Gondo is torn: at this very moment, he is gambling to gain majority control of his company, and he will lose everything if he pays the money. He paces the perimeter of his glass house, gazing over its precipitous edge. Faced with a terrible choice, his jungle self strains at the buttons of his cardigan.

Mifune (left) and Tatsuya Nakadai (right) in High and Low

The first half of High and Low operates on a vertical axis: a literal and metaphorical felling of Gondo from his perch. In an emblematic scene, Gondo drops to the floor of his living room and empties out his old bag of cobbler's tools, to the astonishment of his genteel wife and the police detectives who’ve arrived to help. He rolls up the sleeves of his dark robe to stitch a tracking device into the leather case that will hold the ransom money. Plopped down, he regresses to his burakumin roots, while at the same time, the animality of the hirsute ronin from Yojimbo begins to emerge: dark stubble shadowing his cheeks, hair messily overgrown as he barks at his high-born wife that she could never endure a life without ease and wealth.

By contrast, the smooth countenance and measured, gliding steps of the soft-spoken police inspector played by Tatsuya Nakadai (who two decades later would transform into a hoary, hairy Lear in Kurosawa’s Ran) embodies a horizontality that is calm, logical and reassuring, even when it is accelerated to the extreme in the famous bullet-train sequence. Even when the pursuit of the elusive kidnapper plunges the detectives into the seedy neon underworld of nightclubs and drug dens haunted by ghostly, writhing addicts, there is a pervasive sense of control, order, and final, inevitable capture.

While Mifune’s presence recedes during this latter half of the film, he does appear in one memorable scene outside of Gondo’s glass house after the ransom has been paid, the chauffeur’s son has been returned, and, in all likelihood, his fortunes have collapsed. He is pushing a mower back and forth, trimming an already trim lawn. He is coiffed and shaven, but his shirt is sweat-stained. He is keeping the beast at bay, performing a lowly chore ordinarily done by one of his workers.

The last time we see him, in the film’s famous final sequence, he is once again impressively suited up yet noticeably aged, with grey at his temples. He strides down a stark grey corridor and is admitted to a tiny caged space to meet the kidnapper, who has requested an audience with his intended victim. With steel mesh separating them, Gondo sits face to face with his former adversary, he who gazed up while Gondo gazed down.

As the kidnapper’s initially smug, self-justifying account of himself becomes more and more hysterical, his mind and self seemingly unravelling in real time, Gondo watches silently, gazing through the wire, twinned with the monster, looking at a reflection of himself sliced and angled in chaos. The prisoner is seized by his keepers and dragged through the door at the back of the room, leaving Gondo alone, bereft, his passion and rage and bitter heritage of underclass resentment spent through the vehicle of his doppelganger. 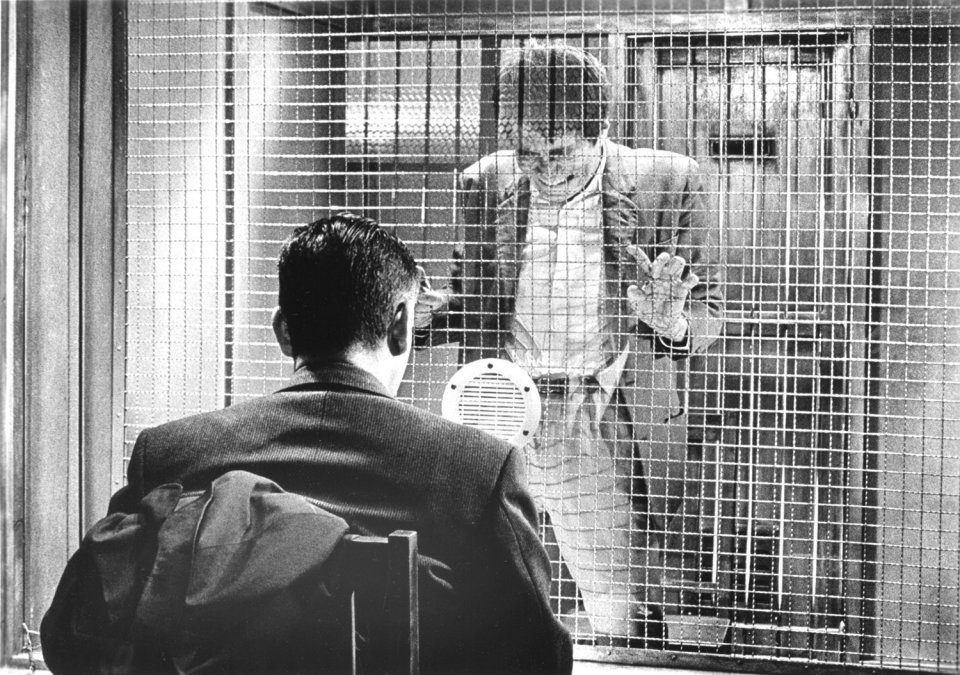 In my own years since those afternoons spent in film class watching Rashomon, Yojimbo and High and Low, I've enjoyed dalliances with Asian celluloid heroes beyond and between the fancy and the jungle. I’ve succumbed to the soulful eyes of Tony Leung in Wong Kar-wai's In the Mood for Love, and the androgynous beauty of the pineapple-loving Takeshi Kaneshiro in Wong’s Chungking Express; for a second I flirted with “Beat” Takeshi Kitano as the flinty-faced yakuza in Sonatine and blind warrior in Zatoichi, but his cold-eyed brutality held no passion for me. Yet time and again, I return to the strutting, rutting Toshiro Mifune: the brooding physicality, the earthy wit, the sheer animal beauty, the shimmering midnight thickets of hair (above the neck and below). Perhaps Ali Wong would say that I, too, am a jungle Asian, whose heart answers to the lion's roar.

High and Low with Kerri Sakamoto

The Life of Oharu

“The Emperor and the Wolf”: Akira Kurosawa and Toshiro Mifune

The “Big Five” of Japanese Cinema

The Furious Five of the Japanese New Wave