The Furious Five of the Japanese New Wave 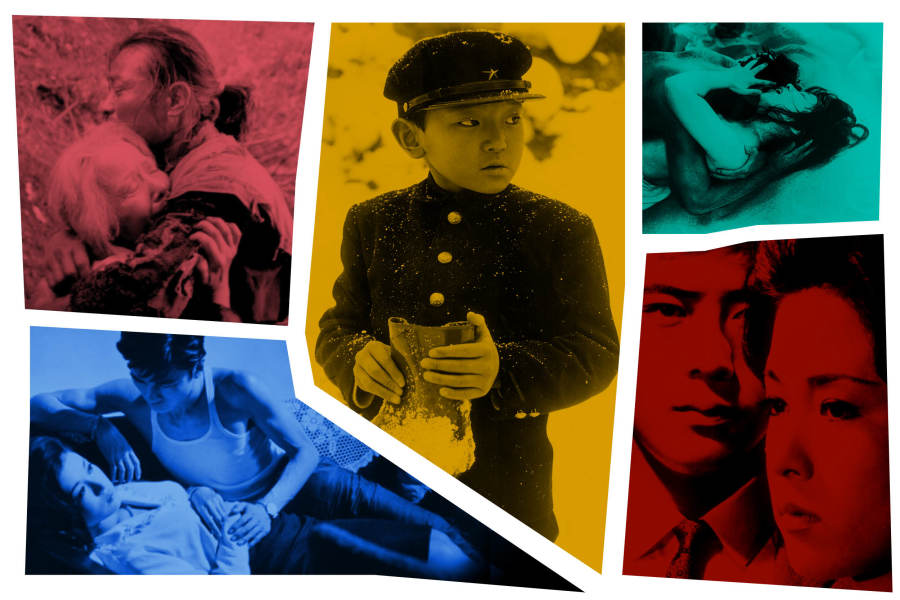 Unlike its European counterparts such as the French nouvelle vague and the British Free Cinema, the Japanese New Wave (nuberu bagu) originated not in opposition to its country’s established film industry, but within that studio system itself. “It should be stressed that the avant-garde/political cinema that constitutes the Japanese New Wave movement occurred within a mainstream context,” says David Desser in Eros plus Massacre, his history of the New Wave. “All the major films within the initiating moments of the New Wave were produced at a major commercial film studio, [meaning] that the movement arose within the confines of one of the world’s most rigidly commercial cinemas.”

What this also means is that, for many of the filmmakers who are identified with the New Wave, there was a direct institutional or even personal link with the “Big Five” (Kurosawa, Ozu, Mizoguchi, Ichikawa and Naruse) who had defined classic Japanese cinema with their internationally celebrated works of the 1940s and ’50s. Thus, as Desser points out, some of the filmmakers whose work the New Wavers were rebelling against — such as Masako Kobayashi, whose monumental three-part epic The Human Condition was the pinnacle of postwar Japanese cinema’s liberal-humanist social critique — can now with hindsight be identified as important precursors to the movement.

Below, our Summer in Japan programmer James Quandt offers an overview of five key figures of the Japanese New Wave.

“I have an image of myself as fighter. I would like to fight against all authorities and powers,” Nagisa Oshima once said, and from his first film forward Oshima was indeed a fighter: less a maverick than an insurgent, rebelling against every myth, tradition, and piety of Japan, Inc. Fond of polemics, he sometimes dismissed the entirety of Japanese cinema, and his fierce determination to expunge from his own art the signifiers of that tradition led to his initial shunning of characteristically “Japanese” shots of the sky or of people sitting on tatami mats. Most famously, he banished the colour green from his films because of its association with the traditional Japanese garden and its proximity to the consolations of home; instead, red would become the marker of his dire vision of Japan, most notably in the numerous signs of scarlet in the stunning widescreen compositions of Boy. Extremity defined both Oshima’s vision and his stylistics: Night and Fog in Japan, for example, was shot in only 47 long takes, and its palpable outrage at the failure of Japanese left-wing activism in the 1950s is juxtaposed with a Brechtian use of theatrical friezes. 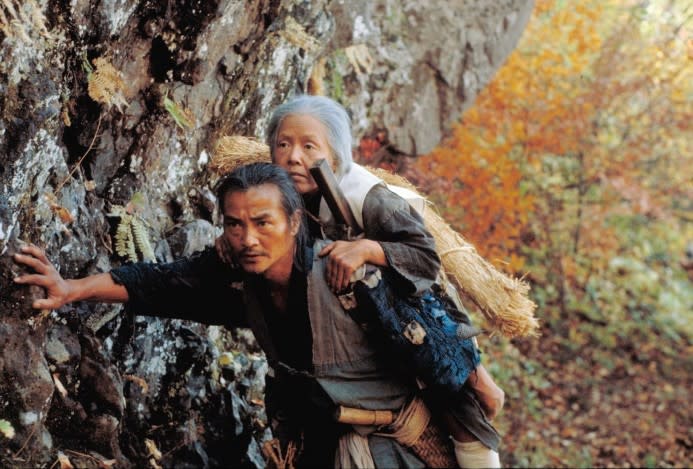 The Ballad of Narayama

Beginning his career in the 1950s as an apprentice to a number of directors, including Yasujiro Ozu and Yuzo Kawashima (see below), Shohei Imamura consciously repudiated the serenity and decorum of that first-named mentor with his raucous, ribald CinemaScope epics about peasants and prostitutes, pimps, pornographers, and Peeping Toms, all of them trying to scrape together a little money and (often secondarily) a little happiness. Imamura’s anarchic sensibility and dauntless visual style celebrate what is excluded from Ozu’s refined world: the irrational, the instinctual, the carnal, squalid, violent, and superstitious life of Japan’s underclass, which Imamura insists has remained immutable over thousands of years. The director’s centuries-spanning vision was seen perhaps most potently in his award-winning The Ballad of Narayama, wherein he turns the famous novel by Shichiro Fukazawa — which had already received a classic, “Golden Age” film adaptation courtesy of Keisuke Kinoshita — to his own uses in order to craft a characteristically earthy and elemental take on the tale, full of fierce pageantry and brusque sex. 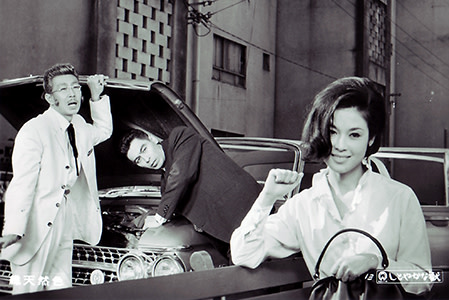 Unlike Ozu’s fixed, if vanishing, world, Yuzo Kawashima’s is one of constant flux and motion. For his young assistant Shohei Imamura, the hard-drinking, nocturnal, eccentric, infirm, and rebellious country boy Kawashima represented the “authentic” Japan, the world seething beneath what Imamura later called “the veneer of business suits and advanced technology.” If for Ozu life is “disappointing” (as his characters famously state in Tokyo Story), for Kawashima it is “embarrassing,” as he was so fond of saying: abashing because of bodily functions, the irrationality of human behaviour, the manifold absurdities of existence. In the latter half of his short career, Kawashima tellingly favoured the widescreen Scope format for his pungent, occasionally crass portraits of the pillow geishas, sugar daddies, and oddballs who inhabit his favourite setting: the inns and brothels of the “pleasure quarters,” far from Ozu’s comparatively rarefied realm. One of the last two films Kawashima made before his premature death at age 45, Elegant Beast may well be his masterpiece: a scathing satire about a gleefully corrupt family, each of whose members is an expert in fraud and hypocrisy, their incessant scheming a grotesque funhouse mirror of postwar Japanese materialism. 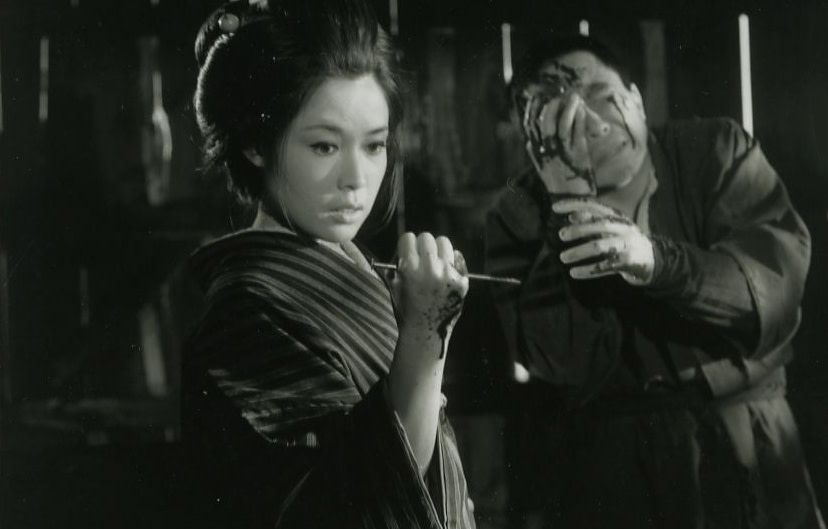 The key transitional figure between Japanese cinema’s Golden Age and the New Wave, Yasuzo Masumura was to the upstart cohort of Oshima, Imamura et al what Jean-Pierre Melville was to the French nouvelle vague: godfather, groundbreaker, iconoclast, inspiration. (Of Masumura’s debut Kisses, Oshima famously said that “I felt now that the tide of a new age could no longer be ignored, and that a powerful, irresistible force had arrived in Japanese cinema.”) An intellectual renegade drawn to Western ideas of existential individualism, Masumura studied for two years at the Centro Sperimentale Della Cinematografia in Rome — where his teachers included Federico Fellini, Luchino Visconti and Michelangelo Antonioni — and returned home with the conviction that Japanese society and (more realistically) Japanese film must change. Critics coined the term “ultra-modernism” to describe the frenetic pacing, eccentric compositions, and ironic use of colour and design that distinguished Masumura’s films, even as the director’s eclectic approach bridged all manner of modes: from the Tashlinesque delirium of his corporate satire Giants and Toys to the stringent elegance of A Wife Confesses, the Seijun Suzuki-like thrills of his Yukio Mishima–starring yakuza picture Afraid to Die to the erotic exhilaration of Seisaku’s Wife. 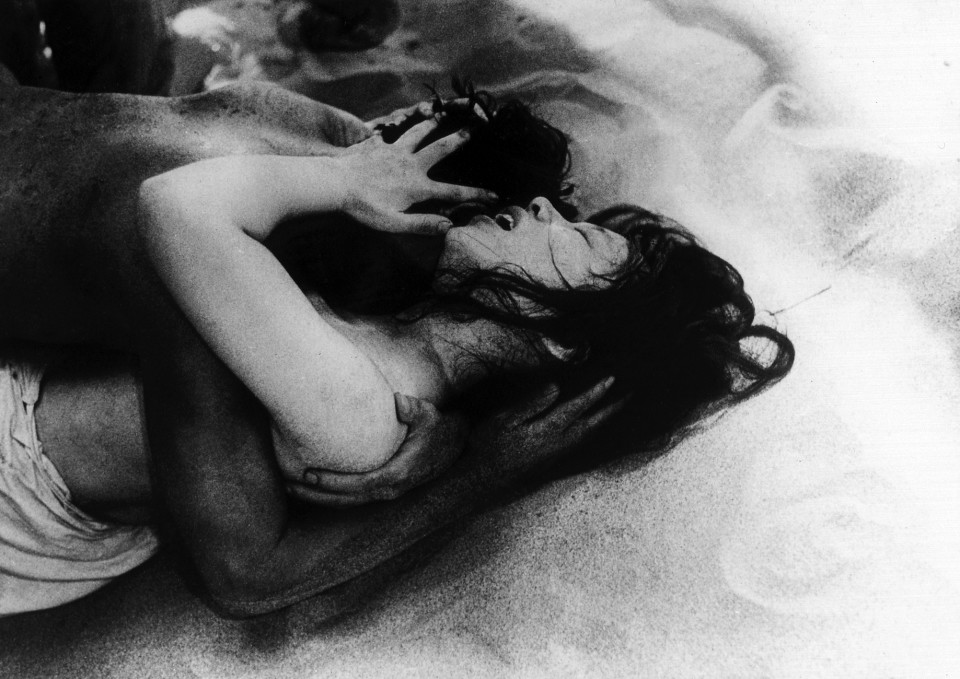 Woman in the Dunes

Having grown up during Japan’s militarist regime of the 1930s and ’40s and witnessed the aftermath of the atomic bombing of Hiroshima and Nagasaki, Hiroshi Teshigara (like so many of his peers) embraced Western philosophy, art, and politics, and was drawn especially to Surrealism, Dada, and socialism. He made his international reputation in the ’60s with a series of eerie existential parables written by Kobe Abe and scored by Toru Takemitsu, in which the central characters are often unmoored or alienated, either trapped in a Sisyphean struggle in the sand (Woman in the Dunes, which secured him an Academy Award nomination for Best Director), murdered for no reason (Pitfall), or riven from their identity by an accident (The Face of Another). No less than philosophical gravity, setting and visual design are key to Teshigahara, so locales, architecture and atmosphere (unforgettably, the ever-sifting sand in Dunes) are as important to his films as their grappling with existential dilemmas.

The “Big Five” of Japanese Cinema

Sex and Death in Japan: The Kino-Fist Cinema of Nagisa Oshima

Night and Fog in Japan

The Ballad of Narayama (Imamura)

Woman in the Dunes

The Ballad of Narayama (Kinoshita)

The Human Condition I: No Greater Love