The Mirror is Tarkovsky’s greatest fusion of his twinned obsessions: time, and suffering women 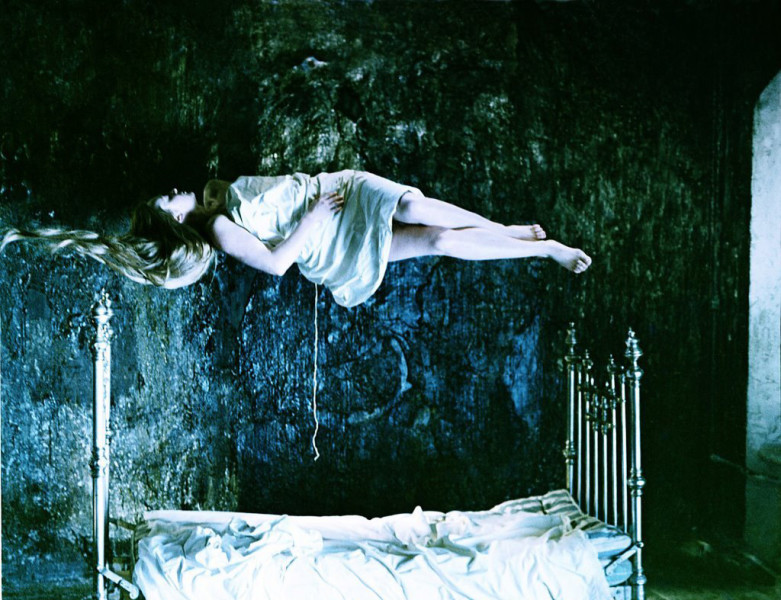 The TIFF Cinematheque retrospective The Poetry of Apocalypse: The Films of Andrei Tarkovsky continues through to November 30.

Considered one of the exemplars of that ambiguous term “poetic cinema,” Andrei Tarkovksy invented his own unique and almost instantly recognizable filmic language, one based on long takes, a radically open narrative structure, and a paradoxical pairing of metaphysical preoccupations with an intensely tactile rendering of the four natural elements (earth, fire, water, and air). Most important to his cinema, however, is another element: that of time, whose bodiless flow and rhythm he sought to capture in the material continuum of those famous long takes. (It’s little wonder that he called the book where he outlined his theories of film Sculpting in Time.)

Tarkovsky does not only evoke the passage of time in the forms of dreams, memories, and images of loved ones; he makes the viewer feel the pressure of time, time as a physical force. And this physical representation of time on screen is the key to the often overwhelming emotional affect of his films, which — though they are all deeply and sometimes cryptically personal, haunted by his singular memories, fears and regrets — continue to resonate with audiences all over the world. The splintered spatio-temporal field of his autobiographical masterpiece The Mirror evokes the fractured, collage-like nature of our own childhood memories. The extended sequence in Solaris of Kris Kelvin (Donatas Banionis) levitating next to the reanimated image of his dead wife Hari (Natalya Bondarchuk) in a gravityless space station is an achingly, beautifully sad visual image of togetherness-in-apartness, of our departed loved ones forever floating in our consciousness. And the final acts of faith performed in stunning, uninterrupted shots by the protagonists of Nostalghia and The Sacrifice, each involving the creative and destructive element of fire — the passage of a lit candle in the former, the burning of the family home in the latter — etch themselves powerfully upon the viewer’s mind, whether one is a believer or not. 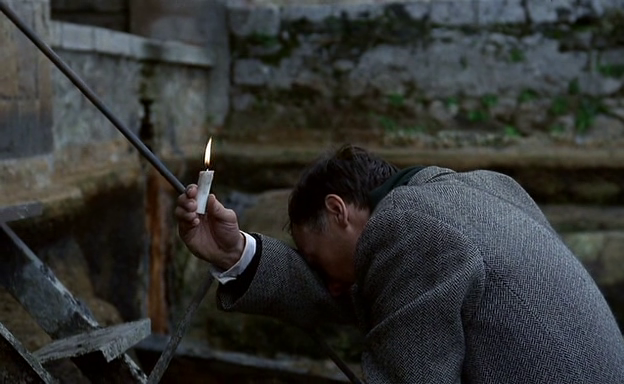 This linking of time and emotion is also intimately related to Tarkovsky’s conception of women in his films, which derives from some of the filmmaker’s most foundational life experiences. As depicted in The Mirror, Tarkovsky’s father, the renowned poet Arseny Tarkovsky, left the family in the late 1930s, when Andrei was a little boy; the future filmmaker’s mother, Maria Ivanova Vishnyakova, raised the children on her own, and suffered great hardships during the Second World War. The loneliness, devotion, and sorrow of his mother during these years had a profound effect on Tarkovsky, and the figure of a young woman tormented by the absence of her beloved man became a poignant, recurring motif in his films — along with the figure of the repentant, faithless husband, perhaps Tarkovsky’s imaginative projection of a remorse that his own father (whose poetry is frequently quoted in the son’s films) may never have felt himself. 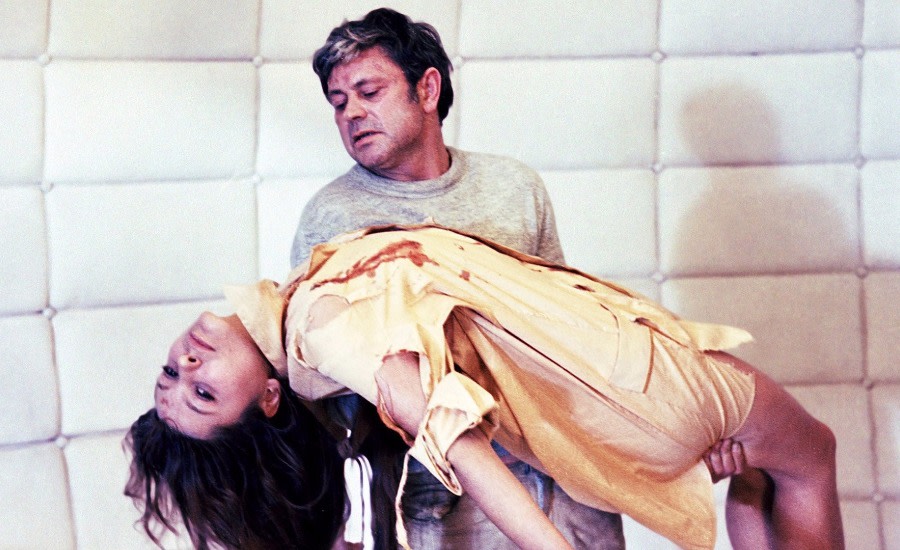 In Solaris, it is revealed that Hari committed suicide because Kris had abandoned her, leaving him tormented by guilt; when she is “resurrected” on the Solaris space station by Kris’ memories of her, the intensity of her devotion to him is so intense that she ultimately cannot reconcile it with the fact that she is “not real.” The title character’s wife in Stalker pleads with her husband to abandon his dangerous journeys into the Zone, while the protagonist in Nostalghia, a Russian writer on a research voyage in Italy, misses his wife, family, and homeland, and feels guilty for leaving them behind. (This scenario would soon be mirrored in Tarkovsky’s own life: after the director declared his intention to never return to the USSR in 1984, his son Andrei Jr. was denied permission to leave the country and join his father in exile.)

But it is in the dreamlike autobiographical opus The Mirror — which was initially conceived as a film about Tarkovsky’s mother to be called A White, White Day — that Tarkovsky achieves his most richly complex and emotional fusion of his twinned obsessions with time and the figure of the suffering woman. Casting his then-aged mother Maria as herself, and his second wife Margarita Tereshkova as both the young Maria (in the film’s many flashback sequences) and the protagonist/Tarkovsky surrogate Aleksei’s estranged wife in the present-day timeframe, Tarkovsky collapses different temporal levels and perspectives into a palimpsest; past and present, young woman and old, reality, memory and dream all seem to coexist on the same material plane. 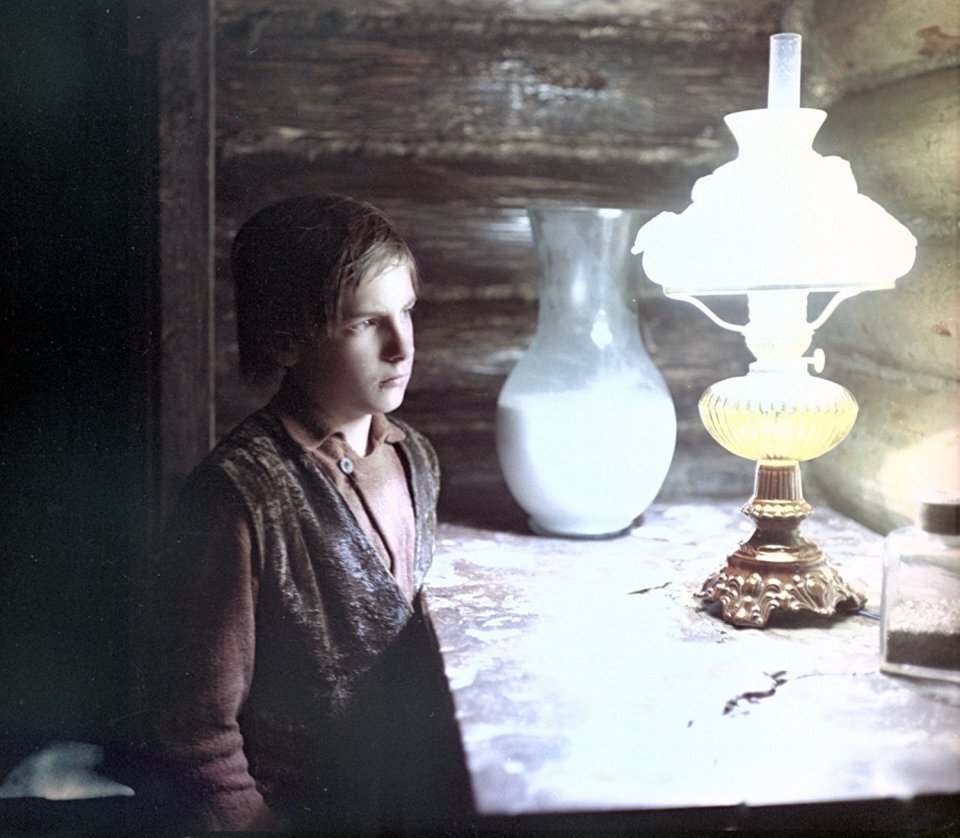 If there is any kind of “anchor” to The Mirror’s dizzying narrative design, it is the recurring image of the small country house that Aleksei lived in as a child, which is viewed in several different ways throughout the film: sometimes in colour, sometimes black and white; in some shots it is obscure, in others it has a vivid clarity. However, there is one particular shot — a black-and-white tracking shot beginning from the edge of the forest that surrounds the house, slowly moving left as a strong wind starts to blow — that is repeated no less than four times in the course of the film. Even though the duration, texture, and sound accompanying the shot is different in each instance, it is fair to say that this shot constitutes a definite visual motif. And as the first of these shots (which occurs about 17 minutes into the film) signals the beginning of one of The Mirror’s most famous and brilliant passages — a passage centred on the figure of Tarkovsky’s mother, wherein the young Maria (Tereshkova) seems to transform into the aged, real-life Maria in the course of a single sequence — it offers some clues as to what Tarkovsky is saying about time in this time-obsessed film.

The sequence begins with Aleksei’s father pouring water over Maria’s hair in a dark, dank and decaying room. The father leaves and Maria stands up in the middle of the room, her long, dripping hair covering her face as if she were a threatening apparition in a horror movie. 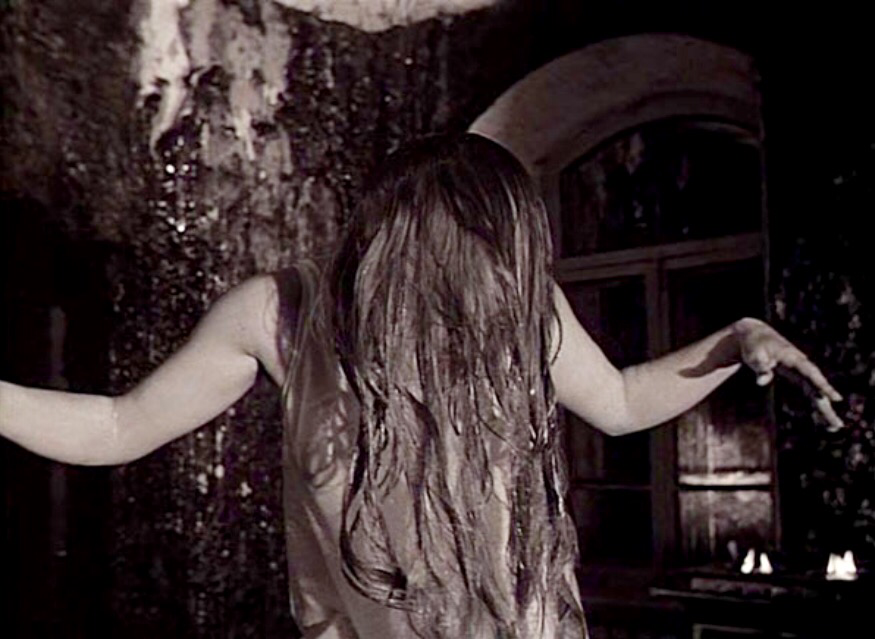 A sharp cut and the room is now empty, water and plaster falling from the ceiling. Another cut shows us Maria again, as she walks underneath the shower in a left-tracking long take; the camera eventually moves past her, capturing her reflection in a mirror before moving past a section of black wall. Suddenly, the camera discovers Maria again, wrapped in a towel and standing in a doorway — a seemingly “impossible” position based on her location earlier in the shot. The camera then circles her to the left as she starts moving to the right; cut to a new shot, showing the reflected image of an old woman (Tarkovsky’s actual mother) on a glass wall, moving from right to left as if she were the reflection of the young Maria from the previous shot. 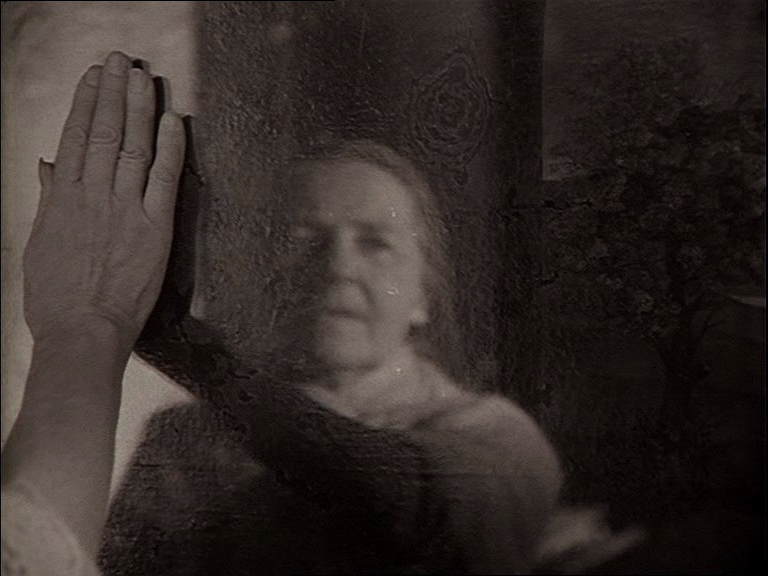 By creating what Robert Bird, in his study Andrei Tarkvosky: Elements of Cinema, describes as “a fold in space … produced by a cut in time,” Tarkovsky creates a doubled, overlapping image of his mother, a seamless connection between the young mother of his memories and the old mother of his present. And appropriately, he mirrors this sequence in the film’s epilogue, which must rank as one of the greatest endings in the history of cinema. As Aleksei lies on his deathbed in the present, a cut returns us once more to the country house of his childhood, the camera panning slowly over serene meadows until it reaches the house, pausing for a moment, then moving downward to frame Aleksei’s mother and father in an intimate moment. It seems that we have gone back in time, as if the ending of The Mirror is the beginning of its story. The father asks Maria whether she would prefer to have a boy or a girl; Maria briefly looks into the camera, directly at us, acknowledging us as the witnesses to all her sufferings during the film, the sufferings that still await her; she then turns her head back to her husband and looks away. A cut, and the camera suddenly tracks to the left as a choir begins to sing Bach’s St. John's Passion on the soundtrack, and we see the old Maria standing in a meadow with her children — the little children she had when she was still a young woman. In this, another “impossible” image, Tarkovsky once again creates a palimpsest of time: it is as if the young Maria has just seen all of her future life pass right in front of her eyes. But tellingly, even as Tarkovsky emphasizes Maria’s mortality, it must be remembered that it is not she but Aleksei who dies at the end of the film. Tarkovsky’s is a male-centred cinema, but often, it is his women who persist, even in their sufferings or subservience; however questionable or regressive it may be, he sees in women a power to withstand the current of time that is often denied his men. Time passes, memories fade, and we all approach death, but the immortal image of the mother, young or old, will always remain.

Andrei Tarkovsky: The Poet of Apocalypse