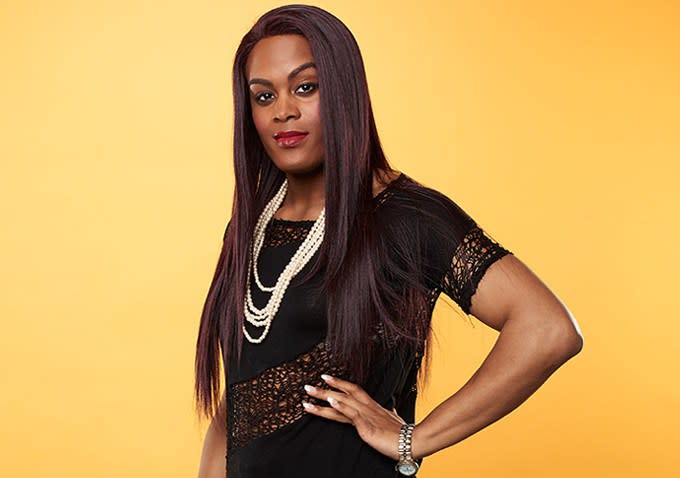 Mya Taylor on Her Life in Acting

The Tangerine star tells her life story and curates The Review

I always wanted to be an actor and a singer. I was basically discovered. I had been through a lot of issues when I started my transition and then I didn’t really talk to my family anymore, for you know, “reasons.” And I ended up moving to L.A. where it wasn’t easy. It was very hard, I had done sex work. It’s no secret, it’s all over the internet and everything. That’s not fun. But you know, I had to do what I had to do to get by.

One day I was outside of the LGBT centre on Santa Monica and McCadden and Sean Baker, he walked up to me. He wanted to know more about the area I was in, which was a high prostitution area. I could tell him everything because I had been in that area for so long. In the midst of that, he got really attached to me. You know, because of my personality, and he said, “We’re gonna make a movie about this.” Sean described it like, “I saw Mya from 30 feet away, she just has that star quality and she’s so beautiful.” And I agree! 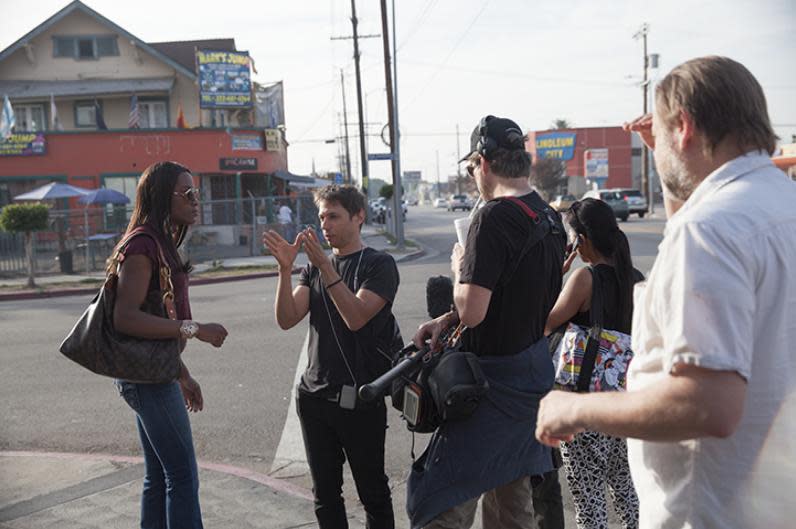 It was nice working with Sean because he was one of the very few people that actually listened to me. A lot of directors want everything to be done the way they want things done. Sean was willing to learn, instead of thinking he knew everything. So that’s what I really liked about him.

Tangerine is simply about two friends who are really, really close to each other. And they’ll do anything for each other’s friendship because they care that much about each other. In the movie, we’re just real, that’s all that it is.

At that time, I was trying to get a job. People don’t really hire transgender people. My struggle was the fact that my name and the gender marker on my ID was not the same as my appearance. And that was an issue. Because here I am, in front of them looking like a girl, and my gender said something different. Which is all changing now and it will be completed in August. My marker will say “female” and everything by the court order from the judge, but it’s a long process.

I had applied for 186 jobs in one month and I did 26 interviews and I did not get one job. I still have my iPhone 4S with all the emails and everything. Because I did not get one job, I had to move from LA back to Houston, Texas to be with my mom. And that was a real bummer. I had the most horrible-est boyfriend at that time. Then I broke up with him and then I did my second film, which was Happy Birthday Marsha, which still is not released yet. Then I had met this other guy, who I’m with now. From that point on, everything started to go up and up and up, especially as Tangerine got more successful and I got more famous.

I’m trying to figure out how to say all this. Because I feel like the bigger that we’ve gotten in media, the worse everything has gotten for us. Look, we’re popular and everything. We’re known to be on TV. And now is when people are saying, “Oh, but they’re going in the restrooms…” We’ve been going in the restrooms for years! It’s sad that people are choosing to hate us and kill us and stuff like that, because we’ve never done anything to anyone.

People see gender and race and they don’t really give you a chance when you’re outside of their element. I feel like it shouldn’t matter what race, or what gender you are. If you’re a chihuahua but you’re the right person to play Angelina Jolie in a story of her life, then the chihuahua should be the star.

I don’t think that non-trans performers should stop playing trans performer’s roles because then I’d be a hypocrite. I have seen The Danish Girl, I thought it was amazing. But I also feel like Tangerine was an amazing movie, that it was a low, low, low budget movie. It was in the same running, there were talks about the Oscars and all that stuff – and we did not get a chance. Somebody who plays a transgender role will be nominated for an Oscar, but an actual transgender woman will not. So that’s the issue that we’re facing now. I was so lucky to win the Gotham Award and the Independent Spirit Award because they don’t look at gender, they don’t look at race.

Where I live, here in North Dakota, people don’t know that I am transgender. Because – look at me. There is nothing about me that’s man – I’m all pussy. When I first started my transition and I started dressing like a woman, I kept my shades on all the time because I was always scared what people were gonna say if they figured out I was transgender. It’s not cool to be clocked. Being clocked means to be figured out. Maybe not all transgender people feel like this, but I feel like if I get figured out, then it’s like, what am I doing all this for? Why am I spending all this money on hormones and makeup and hair if I still look like a drag queen?

It sounds like a read and it sounds funny, but if I were to give advice to another transwoman, I’d say, “Don’t worry about getting clocked or nothing like that, just be yourself.” But it’s so easy for me. When society figures out who you are or what you are, they say mean things about you. There’s a part of me that comes out and says, “Okay, try to be as pretty as possible. As passable as possible.” I just want to say just be yourself, don’t care what other people say. But I obviously do care.

For me, this is how it is: I’d rather have money than be famous. I mean, it’s nice when I’m going through the airports and people recognize me and they’re like “Ahhh! Can I have a picture?” And especially when they’re like, “You’re so beautiful!” That’s my favourite line. That’s cute and everything, but I’d rather just be rich.

I live in a three-bedroom huge luxury apartment and I drive a $55,000 Jaguar. Does that mean that I’m successful? Because some people would look at that and go, “Oh well I have a mansion and I have a Bentley.” So what defines successful? What is beautiful? What is ugly?

For me, I have about three or four women that I really look up to. As far as singers, I adore Celine Dion, Toni Braxton, and Tamar Braxton. That’s Toni Braxton’s baby sister, she sings her face off. She can outsing Mariah Carey. As far as actors, I adore Taraji P. Henson and Sarah Jessica Parker because they can act their ass off and sing their ass off. I like somebody who’s good in their craft.

I love Sex and the City. I don’t have a favourite episode, I love them all. My favourite one in the show is probably Samantha because she’s just a realist. She just tells how it like it is. Me and her are different, because I don’t go around and fuck every man, but we’re similar because we just speak real.

Yeah, I want a TV show, I really do, but I don’t know what’s going on with that. It would be like Sex and the City, but only with transgender and gay people. I wouldn’t be opposed to having cisgendered people, I'd want to get other people so they could be successful too. That’s my plan, to give other people opportunities.

I just want to make a movie about this pretty chocolate princess named Mya. And she gets everything that she wants and don’t forget that she’s really, really pretty. And she has this dream guy named James. And all the women are envious of her because she’s the best, and she’s hot and he’s hot.

You know, kind of like the story of my life.

*Tangerine* Allows Its Characters to Live