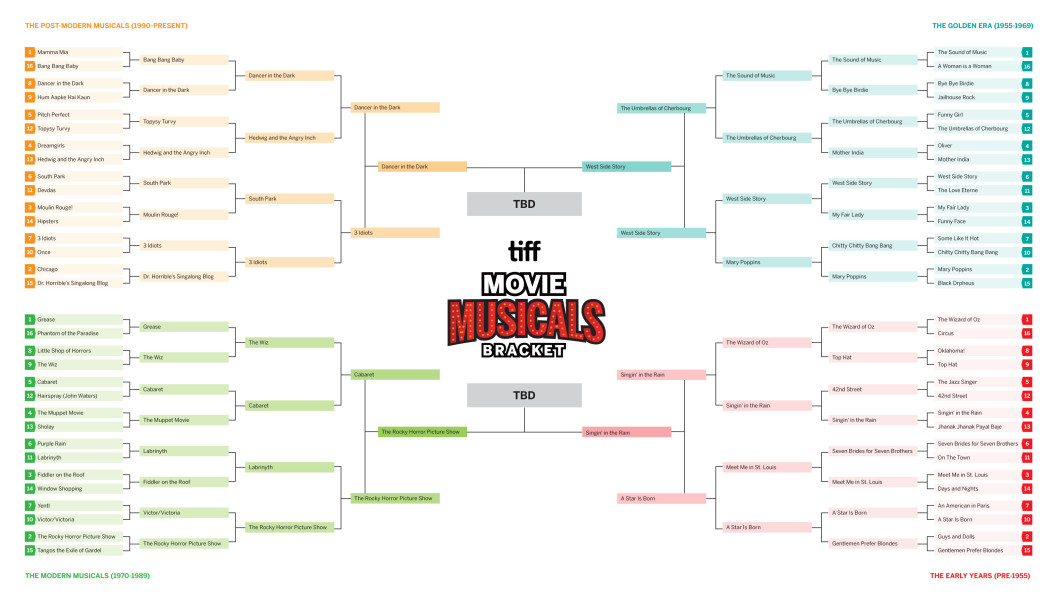 Help us choose: what's the best musical of all time?

Fred Astaire's tap shoes. Dorothy's ruby slippers. Dr. Frank-N-Furter's platforms. Movie musicals have been dancing their way into our hearts for almost a century. At TIFF 2016 we were reminded of their power when audiences were swept away by our Grolsch People's Choice Award winner La La Land, directed by Damien Chazelle (the follow-up to his 2014 hit Whiplash). Set in a mythical Los Angeles, Ryan Gosling and Emma Stone fall in love admidst the heartbreak of following their Hollywood dreams. Our audience's rabid appreciation got us thinking: What’s the best movie musical of all time?

This question naturally led us down a path of furious debate as we revisited old classics, cult favourites and foreign-language gems across cinema history. Eventually, we landed on a list of what TIFF considers the 64 Most Iconic Movie Musicals Ever Made, divided equally into four eras: The Early Musical (pre-1955); The Golden Era (1955-1969); The Modern Musical (1970-1989); and The Current Musical (1990-present). Doing this was hard enough. The only way forward was to use the rubric of a traditional sports bracket, most commonly employed during March Madness. Pitting movie musicals against each other in head-to-head matchups, each would have to prove itself against a worthy opponent. The questions became crushing: *Purple Rain* or *Labyrinth*? *Cabaret* or *Hairspray*? *An American in Paris* or *A Star is Born*? Matchups were determined by a seeding (1 through 16), representing the film’s gross box office revenue (adjusted for inflation rates). Titles that generated the most income were given a higher seeding, but not necessarily an easier time.

With each matchup, we looked at the films’ enduring cultural impact, originality, critical reception, storytelling, cinematic vision and the quality of their musical and dance numbers. From 64, we narrowed it down to 32; some losses were deeply lamented, but we bravely moved forward. From 32, the finalists were cut down to 16, and then eventually eight musical gems remained. This is where we stopped. We couldn’t possibly make these tough choices without the guidance and input of the most discerning film-going audience (that’s you!).

Starting tonight for 24 hours only, we’ll be opening up voting on each remaining round to determine the Best Movie Musical of All Time. The stakes? The winning film will play at TIFF Bell Lightbox on November 17 for a very special screening.

Tell us what you think of the bracket so far (feel free to disagree heartily) and vote on the remaining rounds. Only you can determine what song we can't get out of our heads.

Note: in standard bracket format, these final match-ups will go head-to-head. The winner of the semi-finals will move on the final four. Then those candidates will determine the last remaining two Greatest Musicals of All Time. Now, let the showdown begin!