Maliglutit Remakes the Western in its Own Image

When killing and retribution are not in vain

In 2001, Inuit filmmaker Zacharias Kunuk exploded onto the international scene with Atanarjuat: The Fast Runner, a mythological epic set in the great white north that won the Camera d’Or at Cannes and was Canada’s top-grossing release of the year. It was the first feature-length narrative film in the Inuktitut language and was produced by an independently owned Inuit production company. What’s more, the source material for the film is a 500-year-old Inuit tale of violence, betrayal and exile upon the ice.

Atanarjuat was an act of reclamation. A means of undoing, in Kunuk’s words, “Four thousand years of oral tradition silenced by fifty years of priests, schools, and cable TV.” In Kunuk's new narrative feature, Maliglutit (Searchers), the film goes beyond reclamation and into the bold territory of redefining an entire genre: the western. Maliglutit draws from a new well of inspiration, not oral history but John Ford’s The Searchers (1956), a classic cowboy movie starring John Wayne as a man ruthlessly hunting down his niece’s Comanche abductors. In Ford’s film, Indigenous people are presented as dehumanized demons and a white man’s vengeance is a righteous act. It’s a straightforward western and, like the frontier itself, one that’s predicated on the genocide of North America’s Indigenous population.

Despite being set in the north, Maliglutit is a western through and through. It’s got a harsh landscape where folk eke out an existence, a homestead vibe with each isolated igloo days apart on the tundra and a social space where individuals must enforce their own law. While the film is structured with The Searchers’ kidnapping plot, Kunuk inverts specific conventions of the western genre in order to tell a more nuanced story. One with more shades of humanity, which highlights the act of revenge from an Inuit perspective in subtle, fascinating ways.

There are parallels to be drawn between Maliglutit and Antoine Fuqua’s The Magnificent Seven. Both reinterpret classic westerns from a contemporary perspective. Fuqua’s film is scintillating and cosmopolitan, a multicultural action-movie rendition of the Old West where a far more ethnically representative gang of cowboys combat the economic evils of a robber baron. By the same token, Kunuk updates Ford’s plot, while simultaneously investing it with deep currents of emotional tension that depend upon the Inuit approach to law and order.

Gone is the racial conflict at the core of Ford’s film. The marauders in Maliglutit are Inuit men who have been exiled from common society. This means the crimes aren’t committed against “the Other,” but members of one’s own community. The simple act of dehumanization is not possible in this context, when one shares custom, creed and code. This choice makes the film more harrowing and thought-provoking. If we could do this to ourselves, then what other dark deeds are we capable of? In Maliglutit, retribution is an introspective act, not some simple affair with no loose ends. It is a travesty. It is a failure.

Here, violence is uncomfortable, obscene and slightly taboo. This corresponds to how it is portrayed onscreen. Often the act itself is obscured by the camera angle, or another object in the foreground. We can see that there is a struggle, but not make out the details; the mind rapaciously fills in the blanks. It is constantly unnerving, the way we are denied a narrative blow-by-blow and thus denied exhilarating sympathy with the protagonist in these moments of destruction. Simple camera movements capture the frozen horror of uncertainty and danger, as though we were there in the igloo with them, unable to help. 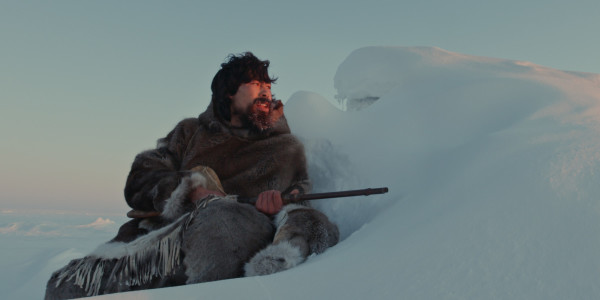 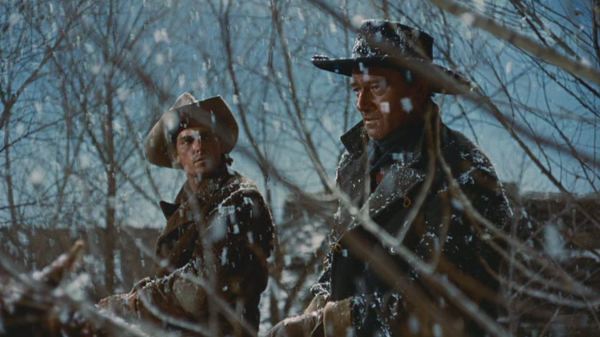 Maliglutit portrays violence as an aberration, as opposed to a way of life. The protagonists aren’t killers, bounty hunters, or jaded sheriffs, but a lone Inuit family whose life is shattered by the destruction that falls upon them in the night. Therefore we see the impact — psychological torment, confusion, despair — and it provides a far more textured experience than Wayne’s supposed badass who murders a swath of enemies without breaking a sweat.

What’s more, we get to see a man express emotions. In contrast to the stony mask of Clint Eastwood or John Wayne, the father of the family, Kuanana (Benjamin Kunuk), reveals a canvas of emotions as wide as it is deep. This is an enlivened form of masculinity, one unafraid to represent or identify with emotional content, one that need not bottle up sorrow or pain. Our hero instead reconciles himself to the truth of those feelings and uses them as a galvanizing force.

By the same token, despite strict historical gender roles (the men hunt, the women do everything else), the film presents a model of femininity predicated on endurance, resilience and grit. The kidnapped wife and daughter do not submit meekly to their captors, but instead are a constant thorn in their side. And it isn’t merely symbolic resistance — they actively slow the marauders’ escape, foil their attempts at ambush and doggedly pursue salvation.

That’s why I call the entire family the protagonists. Their escape from the torment of the marauders is only possible with each member’s contribution. This isn’t the story of one dad saving his womenfolk from other bad men, but a community coming together to heal the rift caused by one violent act. The steps they must take to reassert order are terrible but necessary. The entire epic, dogsled-driven marathon is both an attempt to reclaim a way of life and a goal above and beyond retribution. They want to go home.