Carying the black cinematic memory inside of me: watching Beyoncé's Lemonade and Mati Diop's A Thousand Suns

How did Beyoncé Knowles-Carter find out about Julie Dash’s 1991 film Daughters of the Dust? Lemonade is a mixture of various references, but its very narrative structure is indebted to Dash’s groundbreaking film, which was described by writer Montré Aza Missouri as the “quintessential womanist film.” Watch Julie Dash’s film and you’ll see Lemonade’s same musical and dissonant voiceover. The white dresses. The American South. The omnipresence of bodies of water. The girls sitting on tree branches. The adolescents, adult women and elders reuniting under an impressive gynaeceum. Maybe Beyoncé knew about this film all along. Maybe she was lucky to have a copy of it.

But I have my own theory — Lemonade was made with a specific audience in mind, the voracious and cultivated Black girls and women who have canonized the texts, films and cultural reference points by the artists they love on their own Tumblr and Pinterest pages. These spectators crave challenging narratives about Black womanhood. They have made it clear through their online criticisms and their tweets and vlogs, which I am sure Beyoncé has seen. After all, she found Chimamanda Ngozi Adichie’s TED Talk, which is sampled in “Flawless,” while searching videos on YouTube. Beyoncé uses YouTube.

It’s possible that Lemonade is the first Tumblr/​Pinterest film, with all the connotations that this can imply. Any artist that makes work that directly acknowledges its audience runs the risk of disaster. Like the voracious Black audience that worship and dissects her every move, Beyoncé similarly quotes, borrows, references and samples others. These sources create a coherent and idiosyncratic object. Finally on the internet, Beyoncé found a space that could contain all of her complexity and complications.

Daughters of the Dust was the first feature film directed by a Black American woman to get wide theatrical release in the United States. It centers on Black, and more specifically Southern Black, American women, like no other film does. The film is a poetic invitation to look at the life of the Gullah community in South Carolina who are descendents of former enslaved Africans. As we enter their intimate relationship with their history and land, the film restores something that had been negated and distorted for a long time in cinema. In this work, Beyoncé found herself, her history, the voices of her elders, an attachment to the land. Lemonade is an exploration of the same themes of lineage, transmission, memory, inter­gen­er­a­tional trauma, loss and recovery that Dash radically explored 25 years ago. In this film, Beyoncé found a conduit, a visual medium in dialogue with her own personal history.

However, it would all be a simple tribute or pastiche if she had nothing to say. By actualizing Daughters of the Dust within her own personal context (in 2016 America), Lemonade centers the experience of contemporary black American women. She switches from Southern Gothic imagery to more documentary-like footage of working class Black American women, the ones that usually make the material of viral memes and videos. In Lemonade, these unknown women coexist with the famous faces of Serena Williams, Zendaya and the unforgettable faces of the grieving mothers of sons lost to police brutality.

“We carry these memories inside of we” (Daughters of the Dust) 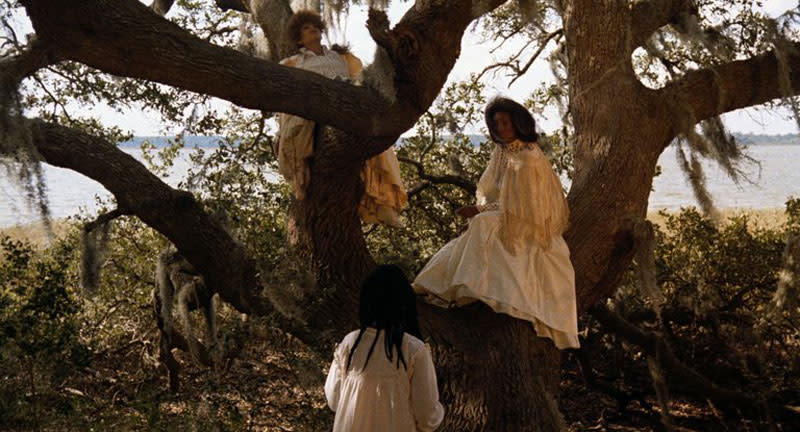 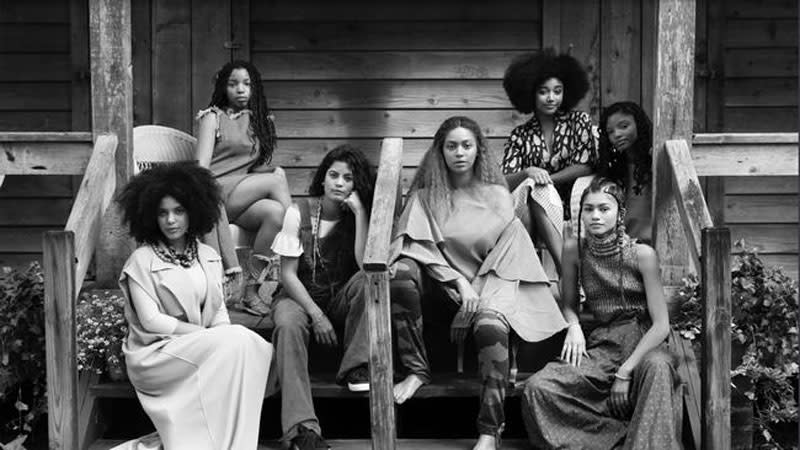 “You passed these instructions down to your daughter. Who then passed it down to her daughter” (Lemonade)

2. STEPPING AWAY FROM THE UNMARKED GRAVE

Films are fragile, said Martin Scorsese, and for that reason they should be preserved. Why? Because, according to Scorcese: “We can’t know where we’re going unless we know where we’ve been — we can’t understand the future or the present until we have some sort of grappling with the past.” This fragility is even more pronounced for Black and women’s films. How do we remember something that has such a hard time emerging to the surface? That is not even deemed worth remembering?

Beyoncé’s stardom and privileged status allow her to reach global masses in a way that female Black filmmakers such as Dash could only dream of. By circulating images and iconography of Daughters of the Dust, Lemonade functions as a site of preservation and remembrance, themes that are significant to both films. Furthermore, Beyoncé positions herself as part of the radical film tradition of the L.A. Rebellion, of which Julie Dash is the most famous member. These Black “insurgents,” as author/​activist/​documentarian Toni Cade Bambara would call them, made it their responsibility to find “suppressed bodies of literature, lore and history.” They rejected Eurocentric models while identifying themselves with filmmakers from the Global South. 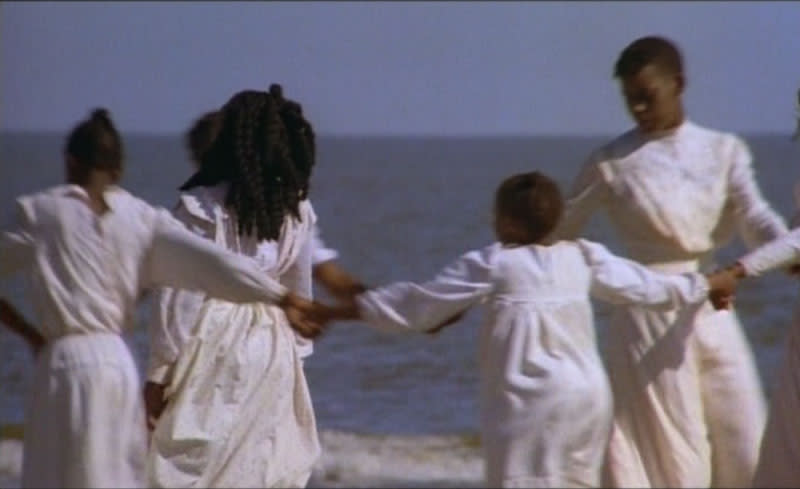 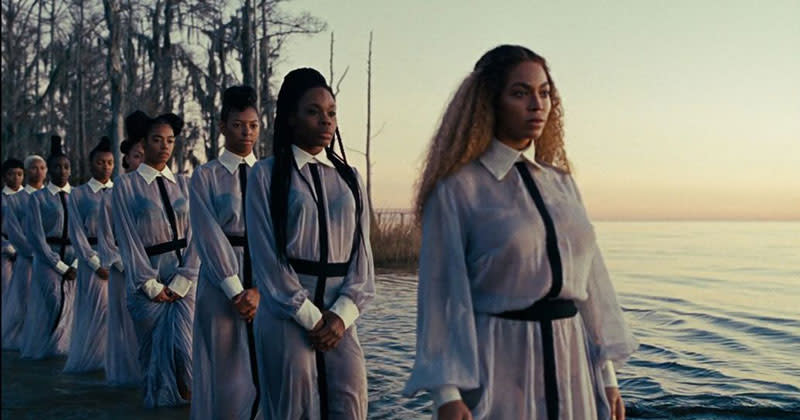 In her foreword to Zora Neale Hurston’s classic novel Their Eyes Were Watching God, author Mary Helen Washington recalls how Black female writers were responsible for the revival of Hurston’s tremendous body of work. Alice Walker was the one to find Hurston’s unmarked grave in Florida, a journey she wrote about in an essay called “Looking For Zora.” What these writers desired, according to Washington, was “a maternal literary ancestry.” The writer Rachel Stein described Alice Walker’s relationship with Hurston as a “return” — “a dual movement that travels backward to reclaim previous texts and history that also, simultaneously, veers forward turning what has been reclaimed in a new direction.”

The unmarked grave is the threat of anonymity, neglect and forgetfulness that looms over the work of Black female artists. It looms even more terribly over the work of Black female filmmakers, whose contributions have been historically overlooked and erased. The inaccessibility of female Black auteurs, due to issues of distribution stemming from racism and sexism, creates a precarious and fragile (if not non-existent) relationship between Black audiences and the work.

Yet again, it’s due to the dedication of Black women that these artists are not totally obscured. Critic Jacqueline Bobo points out that Black women were the oneswho fervently supported Daughters of the Dust when it premiered. She also retraces the way scholars such as Pearl Bowser and Gloria J. Gibson-Hudson have sought, dug up and incited the restoration of films directed by black women since the early decades of the twentieth century. These works allow us to constitute our own maternal cinematic ancestry. A heritage that Beyoncé Knowles-Carter has made accessible again quite beautifully in her music video “Formation” and in her visual album Lemonade. Daughters of the Dust has since been acquired by the Cohen Film Collection and will receive a theatrical release and restoration this fall.

Beyoncé’s stardom and privileged status allow her to reach global masses in a way that female Black filmmakers such as Dash could only dream of.

3. THERE WERE PEOPLE BEFORE YOU, LIKE YOU, WHO HELD CAMERAS

Beyoncé’s return to Julie Dash reminded me of Mati Diop’s 2014 short documentary A Thousand Suns. Again, the themes of inheritance dominate in this poetic tribute to Djibril Mambéty Diop’s wild 1973 film Touki Bouki. Mati Diop, an actress and director of short films, happens to be the niece of Touki Bouki’s director. In a series of interviews conducted in 2008, she explained that she didn’t know much about her uncle’s legacy. Directing this documentary allowed her to reclaim a long-obscured history of Senegal and of cinema. Her film follows the traces of Touki Bouki’s actors Magaye Niang and Mareme Niang to the present day.

A Thousand Suns itself circulates images from Touki Bouki, quoting it and borrowing its main actor, whose face has been immortalized by her uncle Mambéty Diop’s camera. Within the film itself, there is a special outdoor screening of Touki Bouki to which Magaye Niang is invited. Nothing demonstrates the way African cinema suffers from a lack of literacy among audiences than the moment where a prideful Magaye Niang tries to convince children that the young man on the screen is him. Magaye Niang should have been a film hero, a star in Senegal, but Touki Bouki wasn’t well-received when it came out 40 years ago. Today, the cult of the film has been confined to critic’s best films lists and cinephile circles only.

West African filmmakers also face issues of distribution. The late filmmaker Ousmane Sembène pointed to the lack of “channels of transmission” between a director’s oeuvre and the public. He was talking about cinéclubs and critics, but the problem is bigger: what is lacking, at least in Senegal, are infrastructures such as movie theaters where the public would be able to encounter the work of a director and nurture a relationship with it. A Thousand Suns seems to acknowledge that and even desires to fix the problem.

If A Thousand Suns is indebted to Touki Bouki, it is completely a Mati Diop film as she departs from her uncle’s shots to explore her own relationship with Senegal and cinema. Mambéty Diop was a marginal Black filmmaker who advocated for a cinéma de poche, an insolent dreamer who should be revered by all. As the music of the 1952 Western High Noon plays over the opening scene, Mati Diop is making it very clear that it is cinema itself that she inherits. 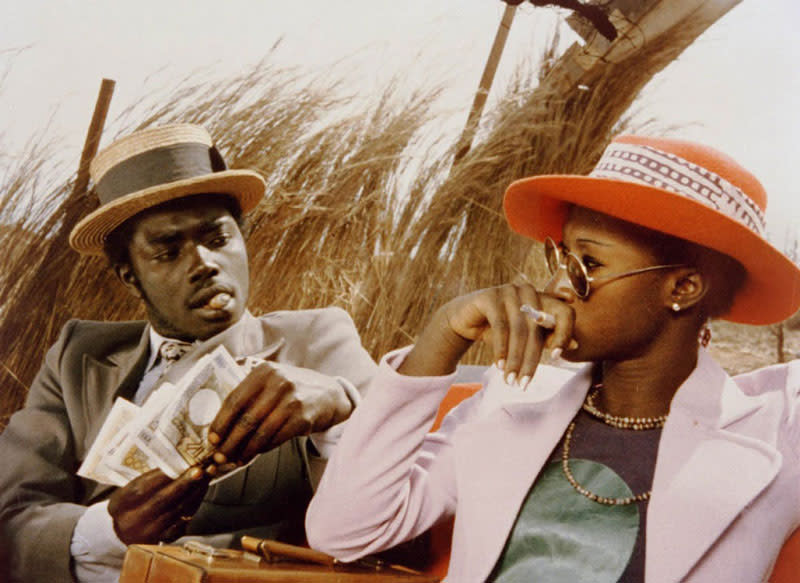 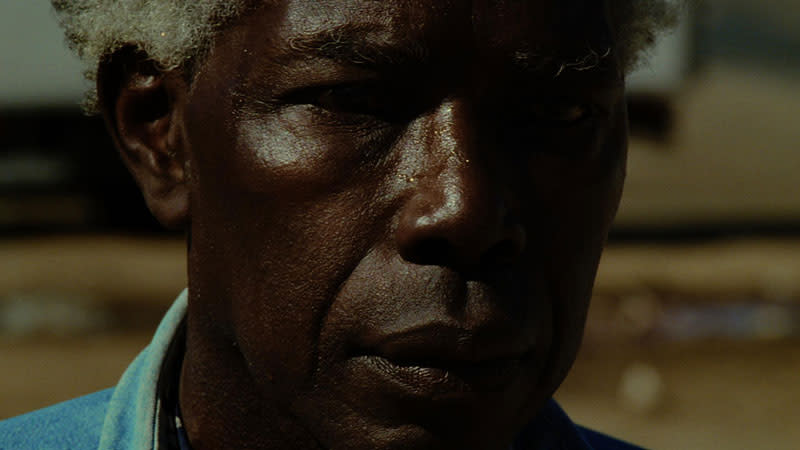 Mati Diop’s desire to reach African audiences is hindered by the fact that her film is a short documentary. It’s an experimental one at that; even further, an African experimental documentary. I saw it in the weirdest setting — a small room in a centre in Montreuil in the eastern suburbs of Paris, with a DIY screen and a tiny audience. I felt a strong duty to see A Thousand Suns for its very subject. My father was Senegalese, and I wanted to reconnect with images that depicted his home, my home. The question of accessibility is crucial for Black filmmakers. A lot of them are directing in opposition to mainstream images depicting blackness, Black America, Africans.

The fact that I can easily return to Lemonade, such a weird and layered object, feels almost anomalous when it should be that way for all films. Try to find A Thousand Suns, and you won’t be able to. Films shouldn’t be stuck in small cinephile circles or libraries. To paraphrase the poet Amiri Baraka, films are supposed to be part of the community, available for all to see. The case for film preservation is clearly made when one looks at the history of Black cinema.

Watching both Lemonade and A Thousand Suns, I was reminded of a rich cinematic ancestry of roots. Heritage can be a burden. There is a freedom that comes with being an orphan. But sometimes one needs permission, validation, affirmation or the simple knowledge that there have been people before you, like you, who held cameras and wrote scripts. Maybe the most touching shot in Lemonade is that of Amandla Stenberg behind a camera. It anticipates the future, a future where Black filmmakers will be able to express themselves as freely as they need and desire. In an interview for i-d, Kahlil Joseph, one of the directors contributing to Lemonade, said:

“The black community is where all the great ideas are, it’s where the next generation of filmmakers are going to come from, it’s what’s going to save movies. Once we start making movies in the same way that we make music, it’ll be undeniable.”