The brassy film/live performance series offers a tantalizing take on Twin Peaks: Fire Walk With Me 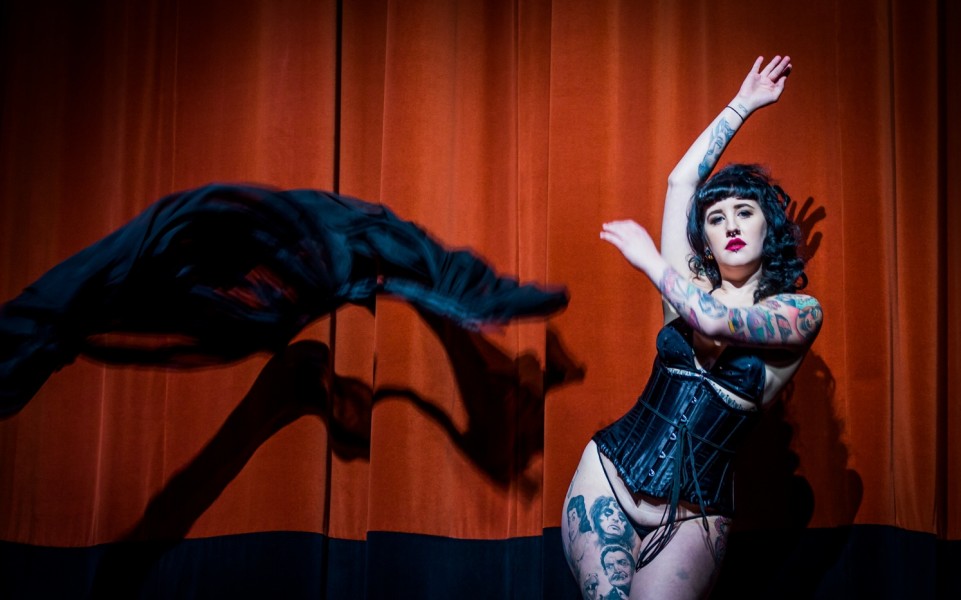 TIFF Bell Lightbox is one of the hubs of Toronto moving-image culture, but that culture also thrives beyond its walls. In our series Outside the Box, we spotlight the grassroots film programmes (and programmers) bringing cinema to our city.

This Week’s Series: Ladies of Burlesque

What It Is: A monthly screening series that pairs films with live, original burlesque routines by Toronto-based dancers and performers, which are designed to complement or contrast the action onscreen.

What’s Next: Twin Peaks: Fire Walk With Me, David Lynch’s much-maligned and totally brilliant prequel to the hit TV series.

Who Does It: Alicia Fletcher, a media archivist, curator and educator who also programs the series Silent Revue at the historic Revue Cinema. Her programme The Enchanted Screen: Fantasy in Silent Film will appear this summer at TIFF Cinematheque. 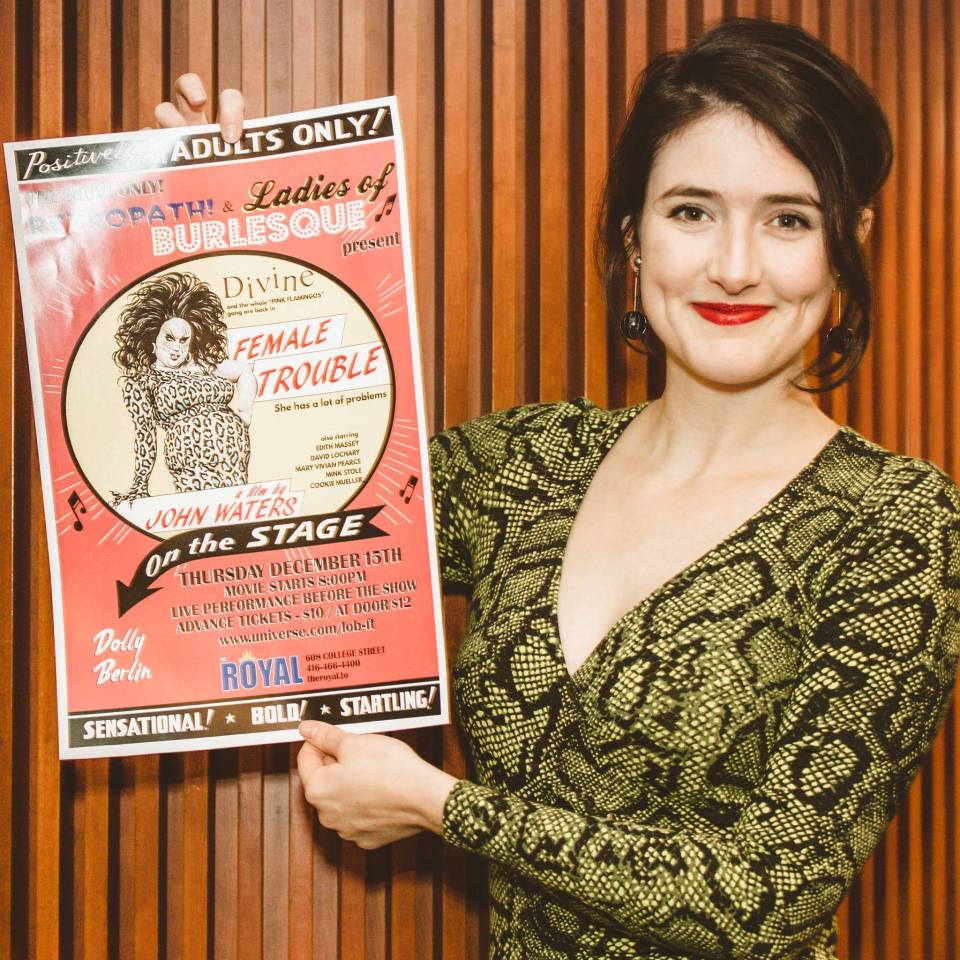 Can you talk a little bit about the idea behind Ladies of Burlesque? Was there an initial impetus to combine a screening series with this particular kind of live performance?

In 2014 I attended my first dedicated burlesque show. It was held at The Gladstone Hotel and was John Waters-themed — it was trashy, abrasive, hilarious, arousing, inclusive, and magical. Working through Waters’ filmography, from Pink Flamingos to Serial Mom, I witnessed many of the artists who would soon become Ladies of Burlesque’s core group of performers combine classic burlesque aesthetic with a film-inspired mode. All that I felt was missing were the actual films the burlesque performances referenced. That was the genesis of the series.

I also wanted to create a participatory feminist film experience — and what better way than to employ a performance art that is, at its core, body-positive, sex-positive, and empowering to those who identify as women? It’s also a performance mode that is largely inspired by the iconic actresses who populate many of the classic films I wanted to present.

How did you make your contacts in the Toronto burlesque community, and what was their first reaction to the idea?

While I had attended a number of burlesque shows, I didn’t really know any of the performers personally. My burlesque ambassador came in the form of Aviva Rosnick, who performs under the name Aviva the Mirage, and was a featured performer at the John Waters show. I asked her if she thought a burlesque film series would work, and I took her enthusiasm as proof positive that it would. She wrote some names of performers on a sticky note (which I still have, as a treasured archival item), and I went from there. I asked the performers who had inspired them, and was very happy to hear many of the same names — some iconic, others more obscure — that I had wanted to focus on in my programming: Barbara Stanwyck, Rita Hayworth, Jayne Mansfield, Cyd Charisse, Dorothy Dandridge, Carmen Miranda, and of course Marilyn Monroe and Marlene Dietrich.

Is there a crossover of cinephile/burlesque interests in Toronto?

Yes, I’ve discovered that there’s quite a crossover — I think both circles like everything “old-timey.” Were there no crossover, I think the series would have died by now, instead of steadily growing and becoming one of The Royal’s most successful series. I rely on both communities to fill seats. In general, what has impressed me most is the encyclopedic knowledge many of the performers have when it comes to Hollywood starlets and even their most obscure films. I think many burlesque performers, by nature of their commitment to another era, are cinephiles at heart.

You've shown a wide range of films in this series over the last year, from A-level Hollywood productions to B movies to New Wave films. Is there something to be said about performance/display/seduction as a common denominator across different modes and eras of cinema?

As the series has progressed, I’ve taken a more metaphorical approach to “burlesque” on film. What unites each entry in the series are strong, perhaps surprisingly transgressive performances that complicated the gender expectations or sexual mores of the period. Most recently I programmed Jean Cocteau’s Beauty and the Beast — partly to capitalize on Disney’s billion-dollar hit, but more so to demonstrate how complicated sexual attraction and fetishization could be in a French film of the 1940s.

Has there been an especially inspired pairing of performer and film for you so far? Or a pairing that recontextualized the movie for you in a significant way?

I was a bit unsure of how Robert Altman’s McCabe & Mrs. Miller would work for the series when I programmed it in February. It was a selfish, self-indulgent curatorial move: it’s one of my favourite films and I refuse to view it on anything but the big screen. After Leonard Cohen (whose music serves as the film’s emotional backdrop) died, I wanted to pay tribute to him — and Atom Egoyan’s Exotica, which features Mia Kirshner stripping to “Everybody Knows,” wasn’t going to work.

But any concerns I had were assuaged by the talents and creativity of Sam Antics, the featured performer. She designed a performance piece set to Cohen’s songs from McCabe — it was mesmerizing and tragic and captured the spirit of an aesthetically ugly, seemingly unromantic film. The audience was silent, which is generally a bad sign during a burlesque performance, but in this instance, she used that to her advantage. It felt like we had collaborated to create something different within the burlesque canon. 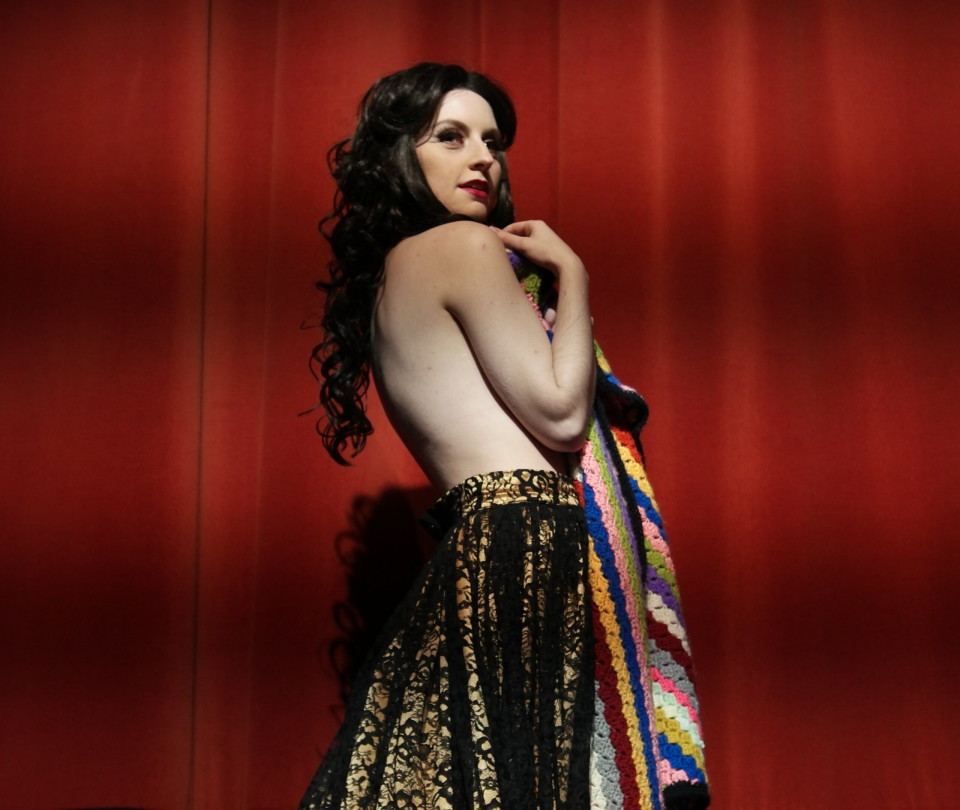 Sam Antics performs to the music of Leonard Cohen at Ladies of Burlesque. Photo by Stan Trac.

In many ways, burlesque is a mode tied to an older period, where representation (at least in the commercial arts) was more limited than it is now — hence the emphasis on sug-gestion and inference. Do you think that burlesque always has to gesture to its origins to remain viable, or is there a 21st-century aesthetic/style that's come into its own?

The definition of burlesque is essentially “parody” or “mockery” of a popular performance mode. It evolved from the 1830s music-hall tradition in England and developed into a mode of “unruly” women performing a recontextualized performance of popular theatre or opera. Striptease didn’t come into play until the Chicago’s World Fair in 1893, when the “hoochie coochie” dance was introduced to Americans by a French performer; and even then, it wasn’t until the 1920s that stripping was incorporated into burlesque performance. (I discuss this history in more detail in a recent article I wrote for Cinema Scope Magazine.)

While the aesthetic of neo-burlesque is often “past,” in that performers frequently gravitate to-wards vintage music and vintage costume, there is today a very active updating of burlesque to contemporary politics and popular culture. For our screening of Howard Hawks’ Gentlemen Prefer Blondes, Dolly Monroe and Betty Quirk recreated the famous “Two Little Girls from Little Rock” costumes and lip-synced to the track with amazing verisimilitude — and then the song transitioned to Kanye West’s “Gold Digger,” at which point they launched into a more contempo-rary hip-hop, music video-inspired performance technique. This kind of past/present performance is so engaging, and really at the heart of why I love programming this series. 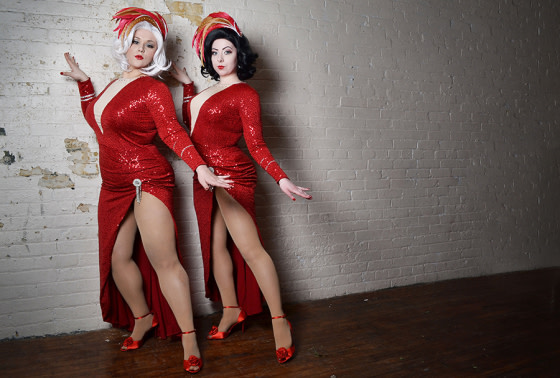 Dolly Monroe and Betty Quirk at Ladies of Burlesque. Photo by Elizabeth Gibson.

What is the movie you would most like to show that you haven't already?

Godard’s Une femme est une femme. Anna Karina plays an ovary-conscious Parisian stripper who takes charge of the situation when her boyfriend refuses to impregnate her. Her sailor-inspired striptease is my all-time favourite Godardian performance piece: it’s sexy yet unsexy, in that she performs to a crowd of uninterested businessmen in a dank café. Godard plays with confrontational voyeurism and empowered sexuality in a way that works perfectly for the series (plus, it’s Anna Karina — not exactly a tough sell). My intention to exhibit is hindered by an as-tronomical fee (in Euros) for clearing the rights — I would require a dedicated grant or sympathetic benefactor, but I am determined to show it at some point in the near future (on 35mm of course).

With regard to Twin Peaks: Fire Walk With Me, this is a film about unimaginable trauma and abuse, and one whose view of sexuality is at best tragic, and at worst deeply aberrant and perverse. Are these concerns in pairing it with a live performance?

This event will draw a much larger crowd than Ladies of Burlesque is accustomed to, and I have substantial concerns that an audience unfamiliar with the series might misconstrue my intentions in programming it. The performances from Dolly Monroe, Betty Quirk and Zilly Lily are intended to celebrate the lighter aspects of the original series, so they’re comedic in nature and very tongue in cheek: a Norma-and-Shelly Double R Diner act and a Log Lady performance piece.

*Fire Walk With Me *is a horse of another colour, and in my curatorial remarks prior to the film I have a responsibility to address this and point out that, while we enjoy Twin Peaks and celebrate it, its self-contained world centres around a young girl who is raped and murdered. Lynch I think intentionally implicates the viewer in their complicit enjoyment of the series by making Fire Walk With Me so unforgiving. My Ladies of Burlesque regulars have come to expect discussions like these (I most recently showed Joan Crawford in Rain, which depicts a sexual assault), so I can only hope the audience will be receptive and contemplative, while also enjoying the evening’s program. 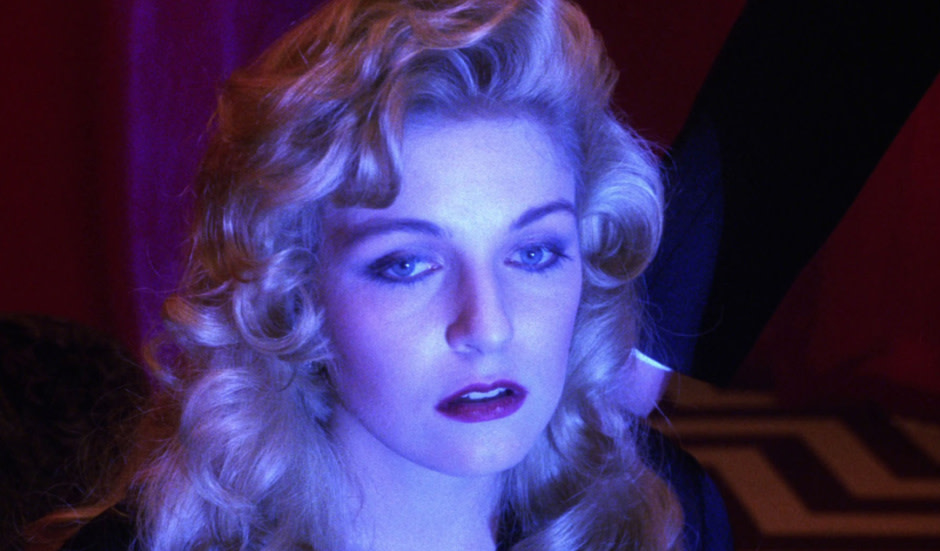 Sheryl Lee as Laura Palmer in Twin Peaks: Fire Walk With Me (1992)

There's always been a burlesque aspect to Lynch's work: it's there in Eraserhead, The Elephant Man, Blue Velvet, Mulholland Drive, Wild at Heart, and even, arguably, Inland Empire. Is this an aspect in Lynch's films that you've thought about?

Funnily enough, I hadn’t given it much prior thought, outside of Blue Velvet and Isabella Rossel-lini’s iconic performance of the title song, so I appreciate your expanding of Lynch’s burlesque aspects. My favourite drag performer, Katya Zamolodchikova (a Ru Paul’s Drag Race alumni) attributes Rebekah del Rio’s Spanish-language performance of Roy Orbison’s “Crying” in Mulholland Drive with inspiring her to perform in drag.

What's next for Ladies of Burlesque?

I want to bring more diversity in representation to the series. I’m currently brainstorming with my colleague Sarah-Tai Black, the programmer of The Royal’s newly-launched series Black Gold, to co-produce something really exciting that incor-porated diverse voices within filmmaking and burlesque. 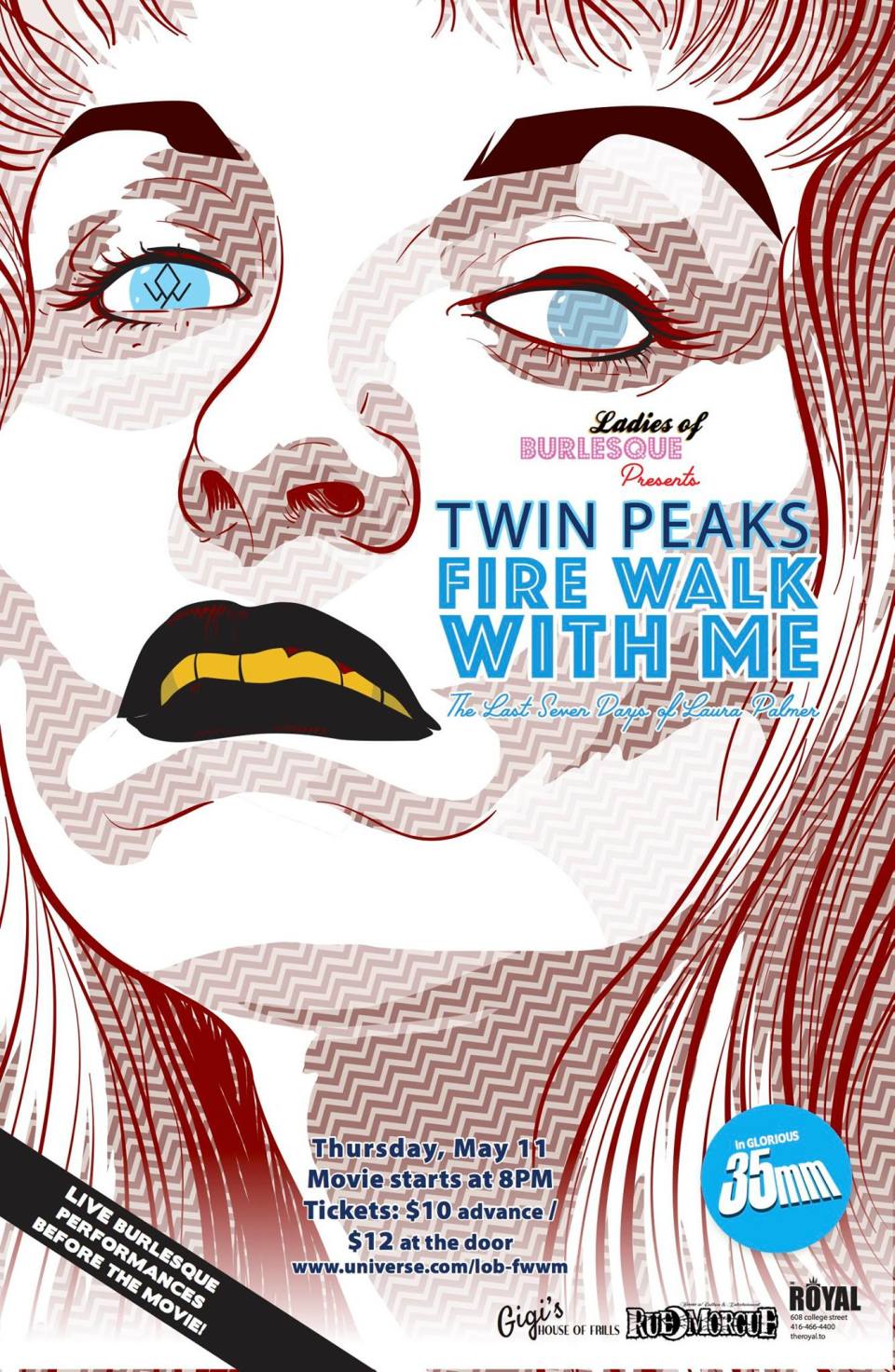 “Suddenly My House Became a Tree of Sores”

Outside the Box: Vertical Features