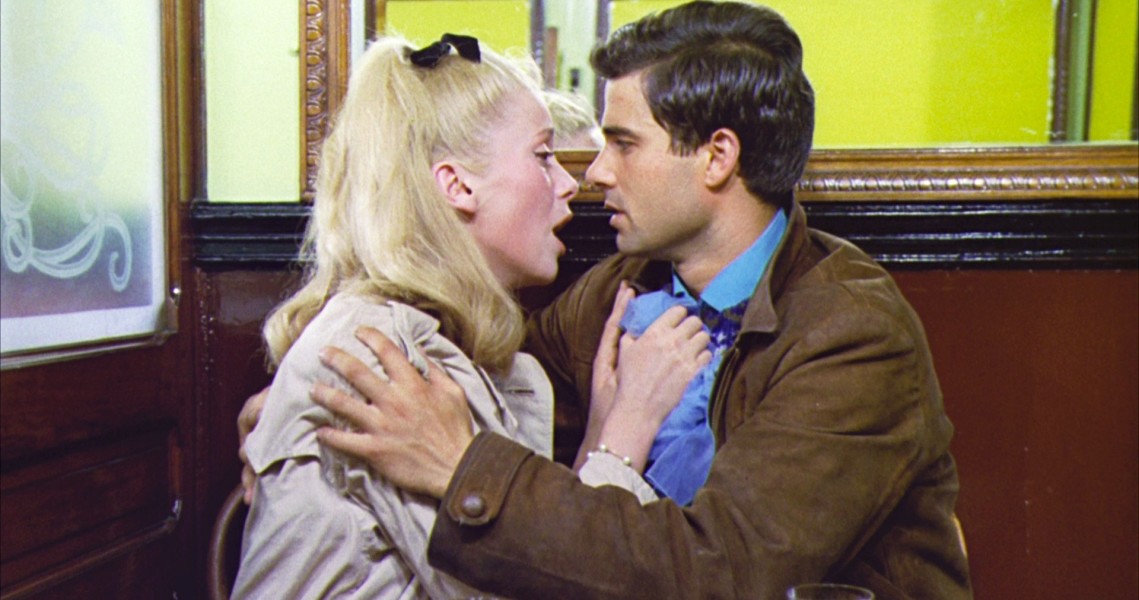 Agnès Varda married fellow filmmaker Jacques Demy in 1962, and the two remained together until Demy’s death in 1990. Given the intertwining of the pair’s personal and professional lives, our Agnès Varda retrospective Radical Empathy includes a sidebar of four classic films by Demy — Lola, The Umbrellas of Cherbourg, The Young Girls of Rochefort, and Model Shop — as well as Varda’s three cinematic tributes to her longtime partner, Jacquot de Nantes, The World of Jacques Demy, and The Young Girls Turn 25.

In the essay below, originally written for TIFF Cinematheque’s Demy retrospective in 2013, James Quandt explores the bittersweet universe of the French master, whose unabashed artifice and cinephilic devotion to classic Hollywood musicals fused with an uncannily documentary-like eye for the everyday.

The Cinematheque’s first tribute to Jacques Demy was called Cinema of Joy, a title which spoke primarily to the Demy of popular conception — a frivolous confectioner who created a colour-coordinated dreamland cobbled together from musicals, fairy tales, and Hollywood classics — and only half-captured the tone of his world view. Like his hero and acknowledged mentor Max Ophüls (to whom he dedicated his first feature, Lola), Demy was too often condescended to as a stylist, a director whose love of artifice and ornament resulted in an art of arabesque (operetta rather than verismo), his propensity for artifice and lighthearted, exuberant tone mistaken for triviality. Much the opposite is true: Demy’s vision was often political (even in fairy tales) and always profound, his natural inclination to delight simultaneous with a clear-eyed sense of life’s sadness. And his visual style, as his fellow nouvelle vague directors and critics at Cahiers du Cinéma recognized, was as innovative as any. 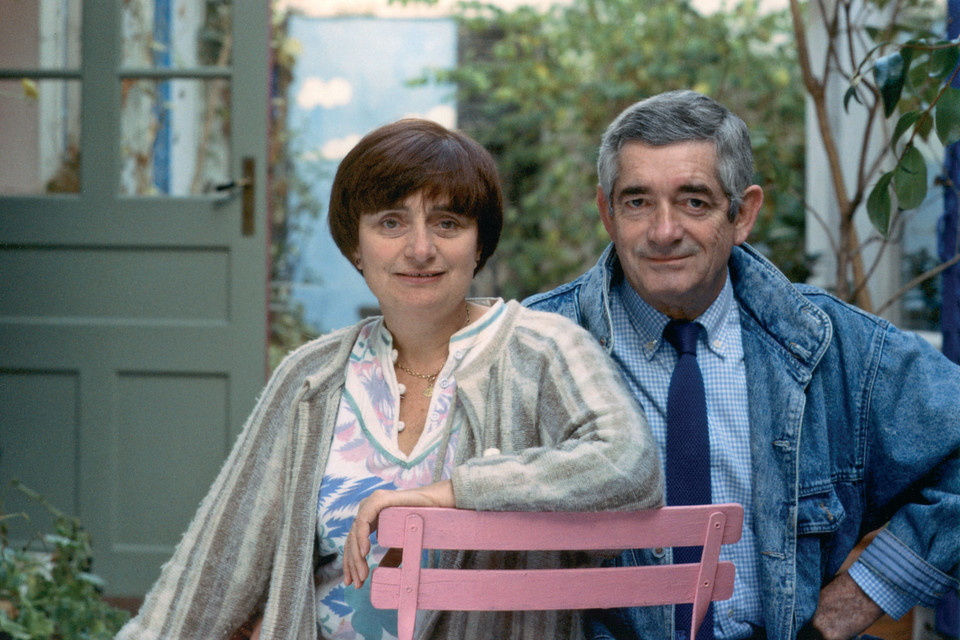 “We have to use reality but get out of it,” Agnès Varda said in 2009, an attitude toward filmmaking that she fully shared with Demy, her husband for over three decades. Demy’s marriage to Varda formed not only an unequalled partnership in the history of cinema — other filmmakers have coupled, but none has produced anything like their combined body of work — but also a felicitous balancing of nouvelle vague and Left Bank Group sensibilities. Varda was more associated with the latter, which included Alain Resnais, Chris Marker, and Georges Franju, while Demy was frequently bracketed with the former, sometimes uncomfortably — especially when his films, beloved and championed by Godard, exhibited a gay sensibility. (Like so many “revolutionary” movements, the nouvelle vague rejected tradition — embodied for them by le cinéma du papa — but continued to cling to Papa’s sclerotic homophobia.) 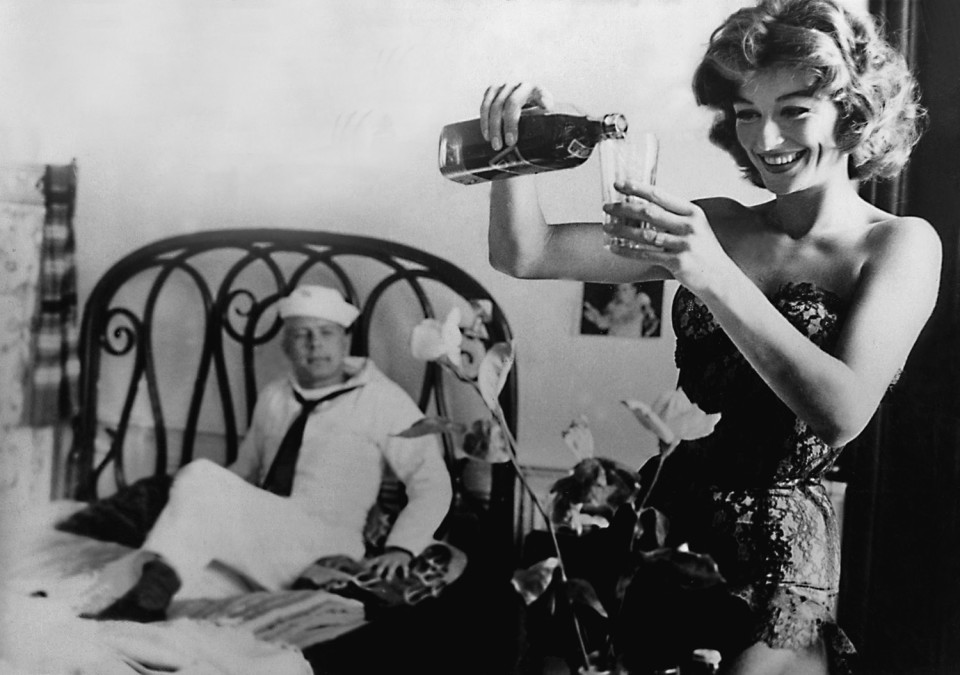 Demy’s movie-mad aesthetic was certainly New Wavey, his cinema as prone to self-reference as Godard’s: Model Shop revisits and updates Lola, for instance, and incorporates details and characters from Bay of Angels, whose opening is echoed in Shop’s iris-out travelling shot. But as fond as he was of flaunting his many cinephilic influences — which ranged from Bresson to Cocteau, Ophüls to Minnelli — Demy was a synthesist more than a pasticheur, miraculously melding facetious mise en scène (matching wallpaper and clothing in The Young Girls of Rochefort, hot pop pastels in A Slightly Pregnant Man), antique cinematic devices such as the iris (the openings of Bay of Angels and Model Shop), and immersive music scores (the all-sung Umbrellas and Une chambre en ville) into a singular style, as recognizable as any in cinema despite its being created from varied and familiar sources. 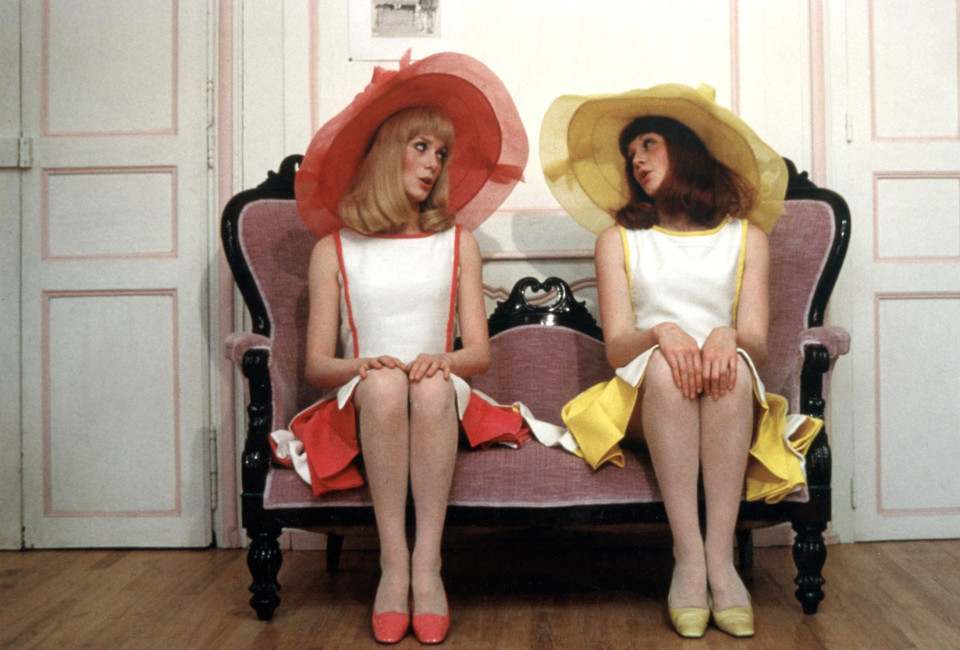 Given the artifice that defined Demy’s world, it might be surprising that his first film, Le Sabotier du Val de Loire, was a documentary in the French neorealist approach of his early mentor Georges Roquier (Farrebique). Though Demy’s subsequent films diverged from that tradition and subject matter, it can be argued that many of them are proletarian dramas in which work and vocation define character — class relations are witheringly observed in Umbrellas, class struggle powerfully portrayed in The Pied Piper of Hamelin and Une chambre en ville — and which display a documentary impulse in their closely observed details of quotidian life and rendering of setting. (Demy said that he wanted Model Shop to be a documentary about Los Angeles in 1968, and researched it thoroughly by visiting many such shops, accompanied by his originally intended lead actor Harrison Ford.) Pace critics who claimed that Demy faltered when he departed his candy-box world and addressed contemporary social issues in Model Shop, Demy was always topical, even overtly political, his treatment of the Algerian War in Umbrellas one of many such instances.

Of all the many contemporary directors indebted to Demy in their ventures into the musical form — the list runs to dozens, including Leos Carax and Christophe Honoré — Lars von Trier was obviously attuned to the French master’s combination of artifice and actuality when making his Dancer in the Dark, not least in his casting of Catherine Deneuve. Made a star by The Umbrellas of Cherbourg, Deneuve became synonymous with Demy’s cinema, acting in three other features for Demy and turning up in others as a cameo-homage (her face gracing a magazine cover in Lola’s apartment in Model Shop, for example). Like Ophüls’, Demy’s was a woman-centred cinema: many of his male actors, such as Claude Mann in Bay of Angels and Gary Lockwood in Model Shop, have the inward, stoppered quality of Bresson’s male “models,” making them tamped foils to the exuberance and soulfulness of Deneuve, Anouk Aimée, Danielle Darrieux, Jeanne Moreau, and Dominique Sanda. (One infers from his adoration of Bresson that Demy introduced Sanda into his world through his admiration for her screen debut, Une femme douce.) 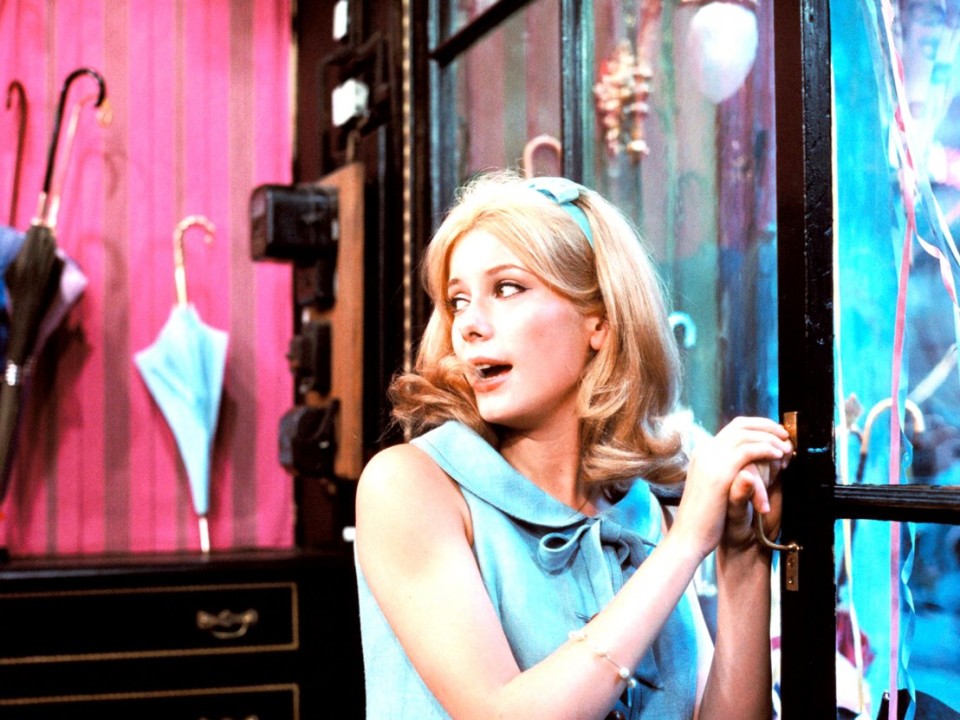 Deneuve in The Umbrellas of Cherbourg

As far from Ophüls’ fated Mitteleuropa as Demy’s delicate, autobiographical films are, they invoke Ophüls time and again, from the very name of Lola’s eponym, to Madame Emery in The Umbrellas of Cherbourg pondering whether to sell her jewels (recalling Madame de...’s similar act of reluctant divestment), to the Ophülsian tracking shot past four windows in Model Shop, following Gary Lockwood through his beach house as if he were Joan Fontaine. Like Ophüls, Demy prized extravagant camera movement (cranes and tracks), employed motifs of circularity both within and between films, and focused on the illusory nature of love, the ephemerality of happiness, and mortality (Demy’s is a most death-haunted cinema), to which he added his own romantic sense of loss and longing. Demy’s irony may have been less astringent than Ophüls,’ his vision of human frailty more charitable, but his endings share with the master a rueful sense of “too late”-ness. Think of the snowy denouement of The Umbrellas of Cherbourg, as everyone smilingly pretends to be content with second best; the bereft Lockwood at the conclusion of Model Shop, desperately crying into the telephone “A person can always try!” as his voice is obliterated by one of the film’s many bursts of jet squall; or the operatic pileup of mishap and tragedy that closes Une chambre en ville. 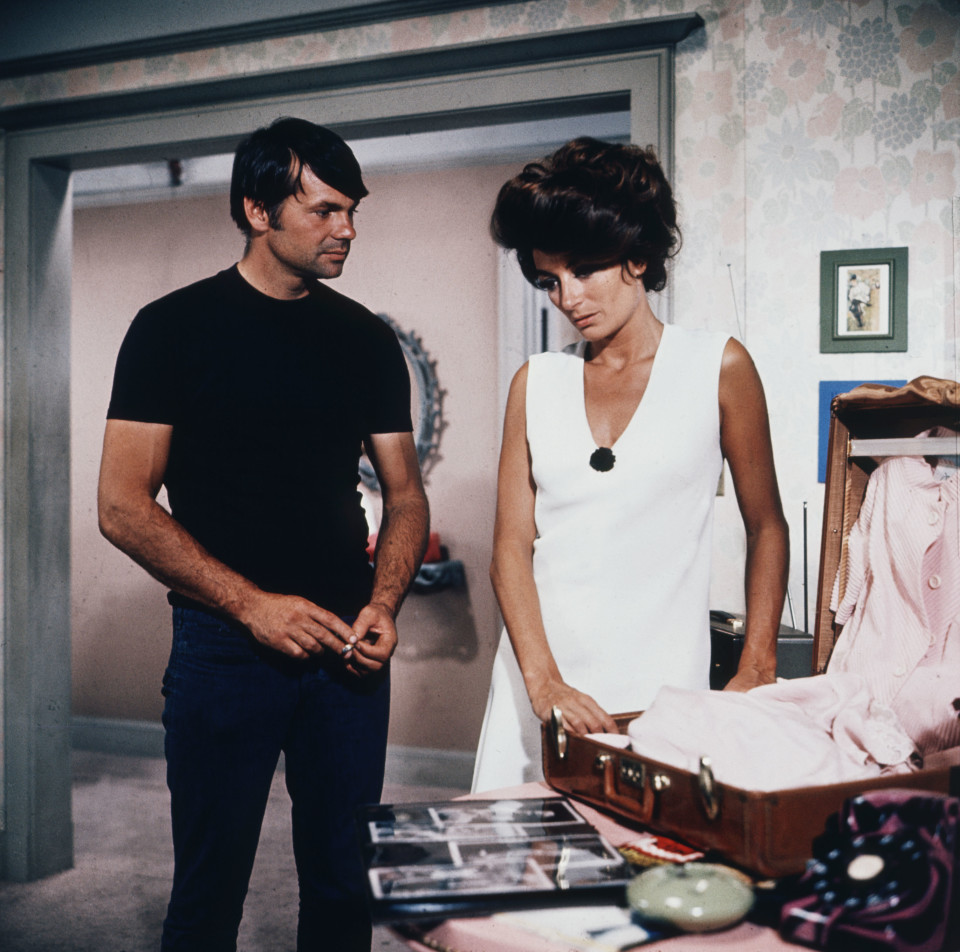 Lola’s italicized happy ending seems to refute this tragic recognition that all is trop tard, that waiting for love is rewarded only with disappointment, but as we learn almost a decade later in its sequel and its true denouement, Model Shop — the two films bookending the ’60s and reflecting its drift from hope to disillusion — death, marital discord and break-up, and a slide into penury and exploitation have turned Lola’s seaport paradise in Nantes into urban perdition in America. The sad trajectory of Lola’s fate reveals how the repeating characters, musical themes, and settings that circulate through the films are less in-jokes than the constellations of “Demy’s universe,” as Varda calls it — a bittersweet world which we now recognize as much for its profundity as for its playfulness.

The Radical, Radiant, and Revelatory Cinema of Agnès Varda

The Affiches of Agnès

Agnès Varda: The Horror of Perfection

Glorious Feelings: Gene Kelly and the Evolution of the Movie Musical

The Young Girls of Rochefort

The World of Jacques Demy