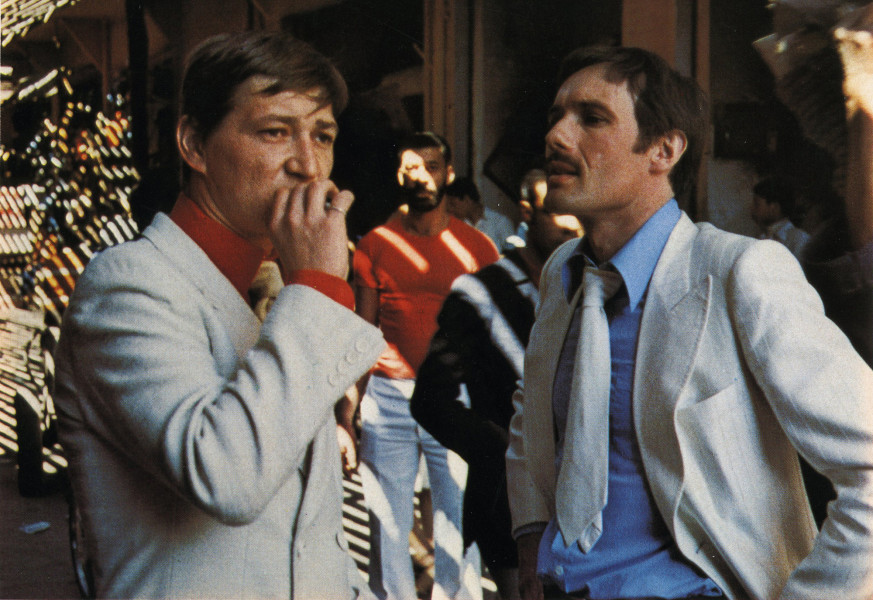 Imitations of Life: The Films of Rainer Werner Fassbinder

“The most dazzling, talented, provocative, original, puzzling, prolific and exhilarating filmmaker of his generation.” —Vincent Canby, The New York Times

“I believe that the cinema has never properly recovered from the untimely deaths of its last two great visionaries, Fassbinder and Tarkovsky.” —Phillip Lopate

“The rapidity, consistency, and diversity of [Fassbinder’s] movies — added to their sheer cinematic inspiration — combine to make one of the great wonders of the time.” —Richard Brody, The New Yorker

“Italian neorealism was the last twitch, and the nouvelle vague, which came from Italian neorealism, was the twitch of a twitch. Then there was Fassbinder, who I felt stood alone.” —Jean-Luc Godard

The title of a recent exhibition in Frankfurt and Berlin — Fassbinder NOW — emphasizes the immense and enduring influence of Rainer Werner Fassbinder on contemporary film and video art. This comprehensive retrospective, which includes many rarities and restorations, encompasses every stage of the director’s astonishingly prolific career, and illustrates the impact that each of his aesthetic transformations had on subsequent filmmakers: without Fassbinder, many of the films of Pedro Almodóvar, Todd Haynes, and François Ozon would be unthinkable. From first to last, whether under the sway of Bertolt Brecht or Douglas Sirk (or both), Fassbinder sought to express truth not through traditional realism (“I never try to reproduce reality in a film,” he said) but through stylization and artifice. To borrow the title of one of Fassbinder’s favourite Sirks, his films are sublime “imitations of life,” their mimesis a matter of corrosive vision, aggressive style and, paradoxically, powerful emotion.

Was Fassbinder cinema’s last genius? Certainly no director since his premature death in 1982 has produced such a prodigious body of work: daunting in its extent, accomplishment, and influence, Fassbinder’s oeuvre will never be equalled again. In his otherwise laudable study Understanding Rainer Werner Fassbinder: Film as Private and Public Art, Wallace Steadman Watson makes the rather ingenuous claim that “had [Fassbinder] lived longer, the creative energy and the capacity for self-examination and artistic growth which he demonstrated during his brief life would have insured his remaining a vital, if unpredictable, force in both German and international cinema.” Unlikely. Politics and culture, German and international cinema have all changed so drastically in the decades since Fassbinder’s death that one wonders if he would be welcome in this world at all, much less be able to continue making his kind of films. Teller of uncomfortable truths, artist of profligate style and mercurial intelligence, unsparing critic of both the powerful and the powerless, Fassbinder found his subject and inspiration in the complacency, cultural amnesia and consumerism of postwar Germany, and it remains doubtful that he could have emerged and flourished in, much less survived, the vicious, vacuous world that is now ours.

Not that Fassbinder had an easy time of it in the ’70s, the decade in which he emerged as the most important director since Godard. A “romantic anarchist” (as he called himself) vilified by left and right, a homosexual criticized by straights and gays, a driven artist punished for his prolifigacy and pessimism, Fassbinder was, as cliché has it, a self-styled enfant terrible, a thorn in the side of both official and oppositional culture. (“I don’t throw bombs, I make films,” he famously declared.) Little wonder that Fassbinder has been compared to such figures as Rimbaud, Genet, and Pasolini: less transgressive than they, he nevertheless lived a reckless life many saw as self-destructive, and his art, like theirs, is violate in its harsh scrutiny of human nature. Few artists have so clearly seen and portrayed our capacity for cruelty, avarice, and self-delusion.

Perhaps too much has been made of Fassbinder’s bleak vision, too little of his often sentimental compassion, his utopianism and moralism. He clearly identified with the Thomas Mann statement he quotes in the finale of Beware of a Holy Whore — “And I say to you that I am weary to death of depicting humanity without partaking of humanity” — and saw his art as recuperative, even redemptive. Echoing Robert Bresson’s statement that one should not confuse realism with pessimism, Fassbinder said:

People often criticize my films for being pessimistic. There are certainly plenty of reasons for being pessimistic, but I don’t see my films that way. They are founded in the belief that revolution doesn’t belong on the cinema screen, but outside, in the world. When I show people, on the screen, the ways that things can go wrong, my aim is to warn them that this is the way things will go if they don’t change their lives. Never mind if a film ends pessimistically, if it exposes certain mechanisms clearly enough to show people how exactly they work, then the ultimate effect is not pessimistic. I never try to reproduce reality in a film. My goal is to reveal such mechanisms in a way that makes people realize the necessity of changing their own reality.

The “mechanism” Fassbinder consistently reveals at the heart of all reality — domestic, social, political — is humanity’s desperate desire for love, and its brutal denial. The title of one of his early films, I Only Want You to Love Me, is echoed in Dr. Katz’s advice to Veronika Voss in one of his last: “Maybe instead of morphine, I should give you a prescription for a person to love you.” Or, as Petra von Kant bewails through her bitter tears, “People need one another, are built that way. But they haven’t learned to live together.” (In this, she echoes what Fassbinder said about Douglas Sirk: “That’s what he makes films about. Human beings can’t be alone, but they can’t be together either.”)

Fassbinder portrayed most relationships — familial, marital, workplace — as mutually exploitative. Love is a commodity, emotion a type of exchange in which, as Fassbinder put it, “feelings are for sale.” Victims are rarely innocent in this transaction; they collude with their oppressors in a kind of sadomasochistic symbiosis. Like Godard, Fassbinder reveals how capitalism and consumerism distort emotion, transforming the “natural” and the instinctive into the material and economic. Unlike Godard, however, Fassbinder did not always resort to the inevitable metaphor of prostitution to reveal the “mechanisms” he saw shaping everyday life. For Fassbinder, “love for sale” was not just a matter of johns and doxies, but of parents and children, husbands and wives, gays and lovers. In Fassbinder’s “imitations of life,” love always exacts a high price.

See the films in the retrospective