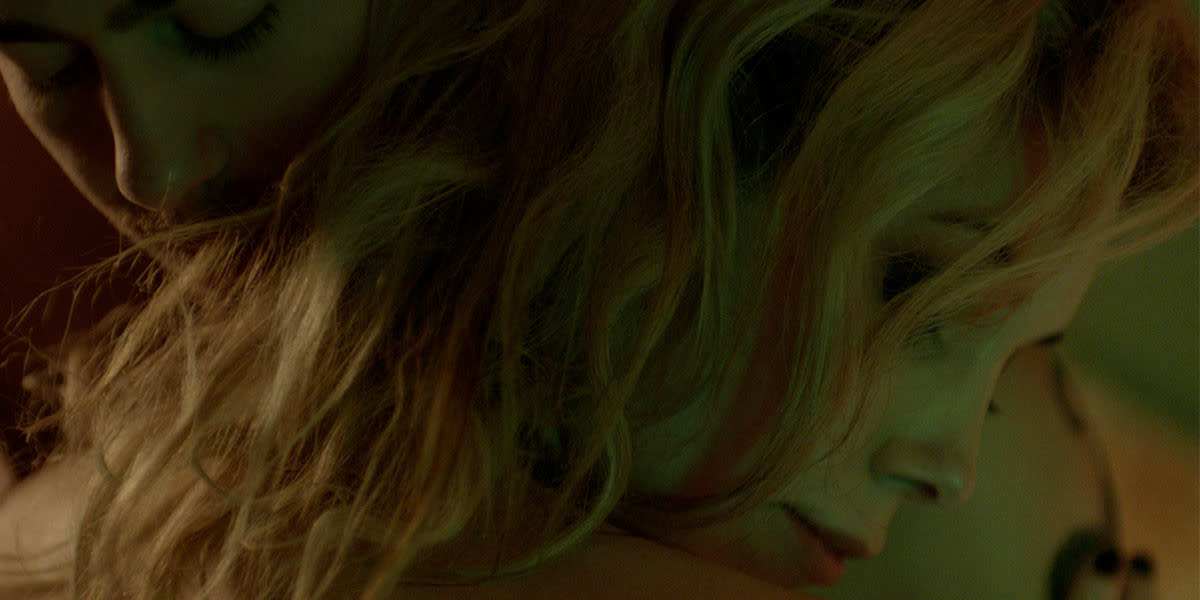 __Pascale Drevillon is an actor from Montreal. She is the star of Pre-Drink, a short film directed by Marc-Antoine Lemire, which won the IWC Short Cuts Award for Best Canadian Short Film at TIFF ’17. It will next screen at Canada's Top Ten Film Festival. In his onstage remarks at the Festival’s awards ceremony, Short Cuts juror Johnny Ma described the film as “A monumental yet intimate portrayal of a woman in transition… We were especially taken by the lead actress, who gives one of the best performances in the entire programme — and for me personally, the entire festival.” We asked Pascale to tell her story behind the making of the film. __

Long before I knew I was a woman, I knew I was an actress. It was never a question of where and when because this proclamation was strongly ingrained by iconic performers such as Anjelica Huston (The Witches), Bette Midler (Hocus Pocus), and Nicole Kidman (Practical Magic), all of whom I obsessively worshipped in the ’90s. Can you sense a witchy theme here? I guess I did want to seduce you all and overthrow the patriarchy — at a very innocent and tender age too.

Let me journey back to my small town in the mountains of La Belle Province, back to when being an actress seemed like too gargantuan an idea to turn into reality. When I was a child my personality was marked by a dramatic temperament, energetic outbursts, and passionate declarations. I could never quite control my emotions, nor could they be quieted down or soothed by my mother. I was constantly in performance mode, each and every time I had the inclination of a potential audience. During these times, the diva in me would awake and perform.

She made an appearance as early as three years old. On a good night, I was a gregarious child who would sing and entertain all the guests at every table in a restaurant. Eventually, I morphed into a brash, androgynous 16-year-old who would imitate all the farm animals you can imagine in under five minutes. I have never been described as “subdued.”

Whenever I found the time to work on my craft, it offered me an escape, one that allowed me to be whoever I wanted. In school productions, I played Santa Claus at age seven and a French Duchess at age 11. But, as I got older and wanted to pursue acting professionally, I noticed that it became harder and harder to be feminine onstage. In high school, I was openly gay and had the confidence to play the role of a gay Latino in a drama class production at the impressionable age of 15. Yet I quickly got tired of playing male characters once I got into the pre-university drama program, even though acting was the one thing I truly cared about. Feeling disappointed and defiant, I was not going to tolerate being put into the wrong box, even if it meant more insults and dirty looks from those who would never understand me anyway.

“Women are made to be loved, not understood.” — Oscar Wilde 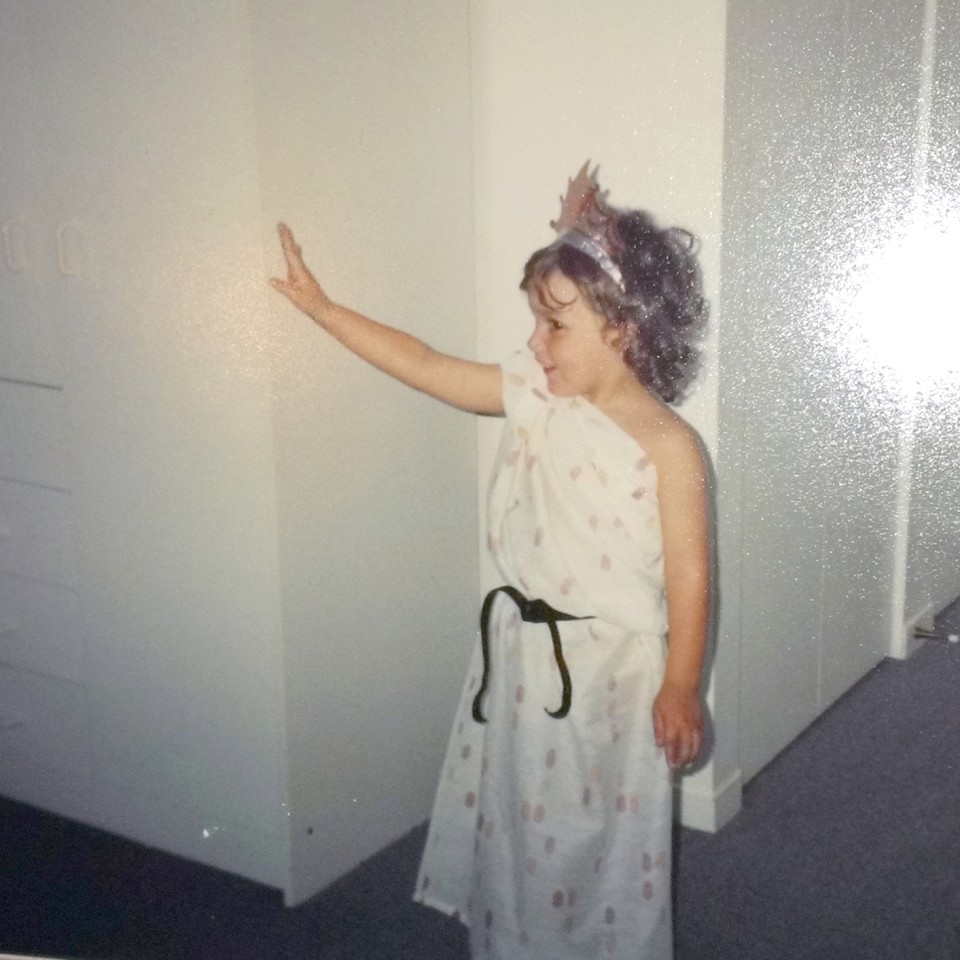 Here’s the thing about trans people: we are just like you “standard people,” or cisgendered folks. At first, we don’t really question the idea of our own gender because we don’t know anything about the concept. Then: the world stops making any sense. We feel constantly out of place. It’s like an out-of-body experience tainted by the nightmarish sense that you might never feel at ease in that body, that gender role, that image which you project and carry with you into the whole wide world. The idea of a transition — a transformation in spirit and in body — becomes a life-or-death situation.

My struggle is about gender. In your case, it might be about something else. It will be a revelation that changes your mindset; a gift or a curse. We all need to go through periods of great change to evolve as humans. I just happened to do that at age 19. And, just like that, I was a woman.

Well, not just like that. But with all due respect, the details are none of your business! I did not come here to sip hot tea, throw shade, and talk about genitals and surgeries. I will bring it up myself IF I feel at ease with the subject and the audience at that moment.

Our society still tends to ostracize trans people and all of those who are “visibly different.” We lack the ability to demonstrate — at all times in our lives — openness, accessibility, and equality. What’s making it worse these days is this idea that the fight for trans and gay rights is over. We are not done apologizing to each other, we have not learned how to properly love each other yet. We have never been told to share a little more and open up our minds and our hearts, in order to talk less and listen better. It’s certainly not over when trans women are still being murdered in silence and when racism and sexism permeates the pop culture we consume. But I like to believe we can choose to be better.

As an artist, I’ve given myself the mission to help other people become more human through the stories I tell. This starts with visibility and inclusion, telling the right story from the clearest point of view. There needs to be a sharper focus on those who we don’t know, those we fear. Trans roles and trans actors have slowly made their way into the mainstream, but it isn’t enough to just remind the audience we exist. While some trans and other gender-nonconforming people may be happy to finally have a seat at the table and be part of the discussion, we need to be able to tell our own stories. No one is ever just one thing. 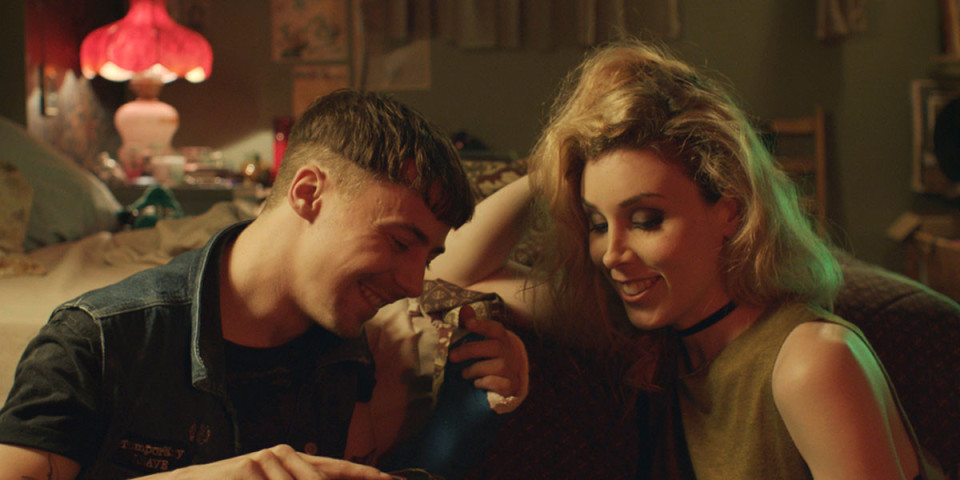 When I first started working on the short film Pre-Drink about two years ago, the film’s writer-director, Marc-Antoine Lemire, wanted my opinion on his script. I was studying drama at the Université du Québec à Montréal, and he had just graduated from the cinema program. We had friends in common, but barely knew each other. Marc-Antoine wanted his story of friendship to be as truthful and respectful as possible. He really had the best intentions. We quickly developed a strong bond, which allowed us to work incredibly harmoniously together. But he wouldn’t cast me as Alexe, the lead role of the film. I didn’t quite fit the profile. Amongst other reasons, Alexe had only started her transition, while I had transitioned 10 years earlier. I’ve always loved to embody elegance and femininity, whereas she is a punk kid and a bit of a bum. After a long audition process, Marc-Antoine realized it was simply meant to be. By the time we were ready to shoot, I was officially a trained actress who wanted to work. 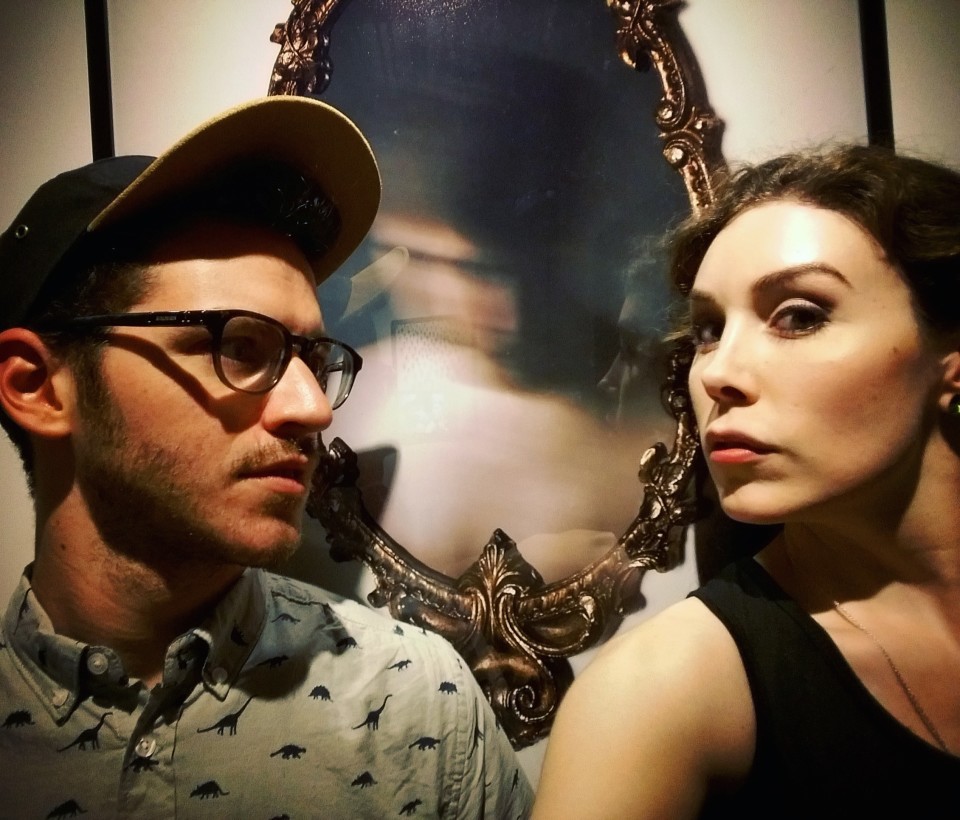 Me, with director/writer Marc-Antoine Lemire, six months before shooting Pre-Drink.

Shooting Pre-Drink was a beautiful challenge. During the making of the film, I had to dive back into the misery, the sadness, the hopelessness of the past. Let us not forget that our adorable makeup artist had to work her magic by glueing a brand new prosthesis on me. Being reunited with an extra appendage was funny at first, then simply horrifying. I was playing a distressed woman who gives herself to the man she loves without truly wanting to, and it made me remember — all too well — how that felt years ago when I gave my body to semi-strangers who would enjoy it so much more than I could. It brought up memories of how much I hated myself during that early period, conflicted between this dream of being someone else, while someone experienced the body I had despised so profoundly.

Everyone on set worked very hard to create a supportive, emotional safety net, allowing my co-star Alex Trahan, who played the role of my best friend, and me to take all the space and time we needed without pressure. As a director, Marc-Antoine was available, interested, informed, open, and caring. After filming one particularly delicate scene, the cast and crew took 15 minutes of meditation. Everyone had felt the tension and the emotional rawness, and afterwards, I sobbed hysterically. 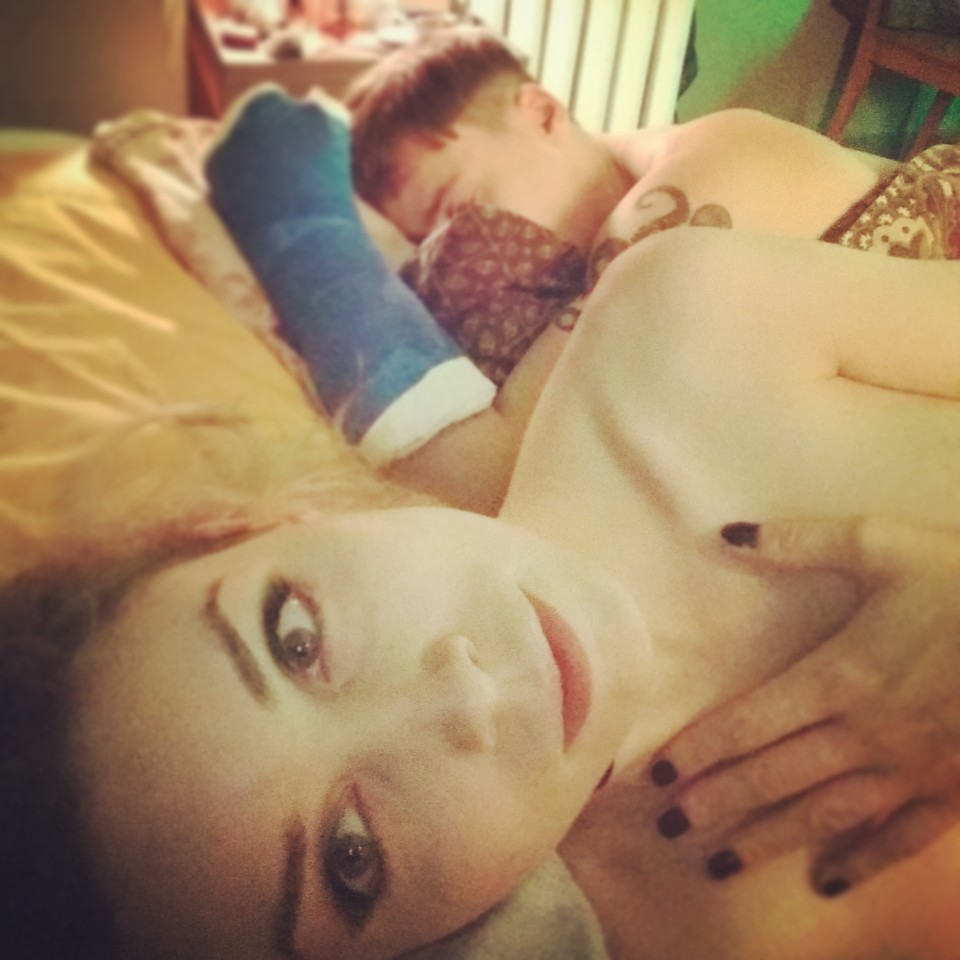 With my co-star/bestie Alex Trahan, napping on set.

I call acting therapy. I also love to call it the best job in the world. While it was a challenge to remain professional, it was also difficult to let go of my anxieties and simply be in the moment once the director called “action.” Playing Alexe reconciled me with so many aspects of my own journey. At first, I told Marc-Antoine that my character and I would never be friends in real life because we were too different. But on set, I only had to let her speak through me. Alexe helped me to become a more fragile and ferocious version of myself, which also made her real for me. It became a pleasure and an honour to be there for her and to let her heal me, and she stayed with me for many weeks after the shoot was over.

I had blankly taken my transition for granted, as if it had been easy and simple. Going back to that period in my life showed me how hard I had worked to calm and digest all my past suffering. While watching the film screen for an audience at TIFF, I also remembered the importance of true friendships. The beautiful central relationship in the movie is one of the best examples I have seen of friends going through major life changes and sharing their struggles. The two friends in Pre-Drink are quite the pair, and we can imagine many different scenarios unfolding after the end of the movie. Even the audience wanted to know: will things change forever between them? Is something broken, or will they be even closer than they ever were before?

In the making of Pre-Drink, we did not set out to make a movie about gender diversity or trans rights. We made a movie about friendship and love, and the limits that separate them. I think that idea applies to everyone, for love has no name, no boundaries, no face, and no ethnicity. We need to keep reminding the world that our differences speak to each other, without saying anything about who we are. My character might as well have been living in a parallel universe, but her feelings and her apprehensions could not have been more relatable to me, or purely human. As an actor, I know I will keep proving people wrong by living different lives in different universes. It will be a true privilege to remind you we are all made from the same materials: flesh and stardust. 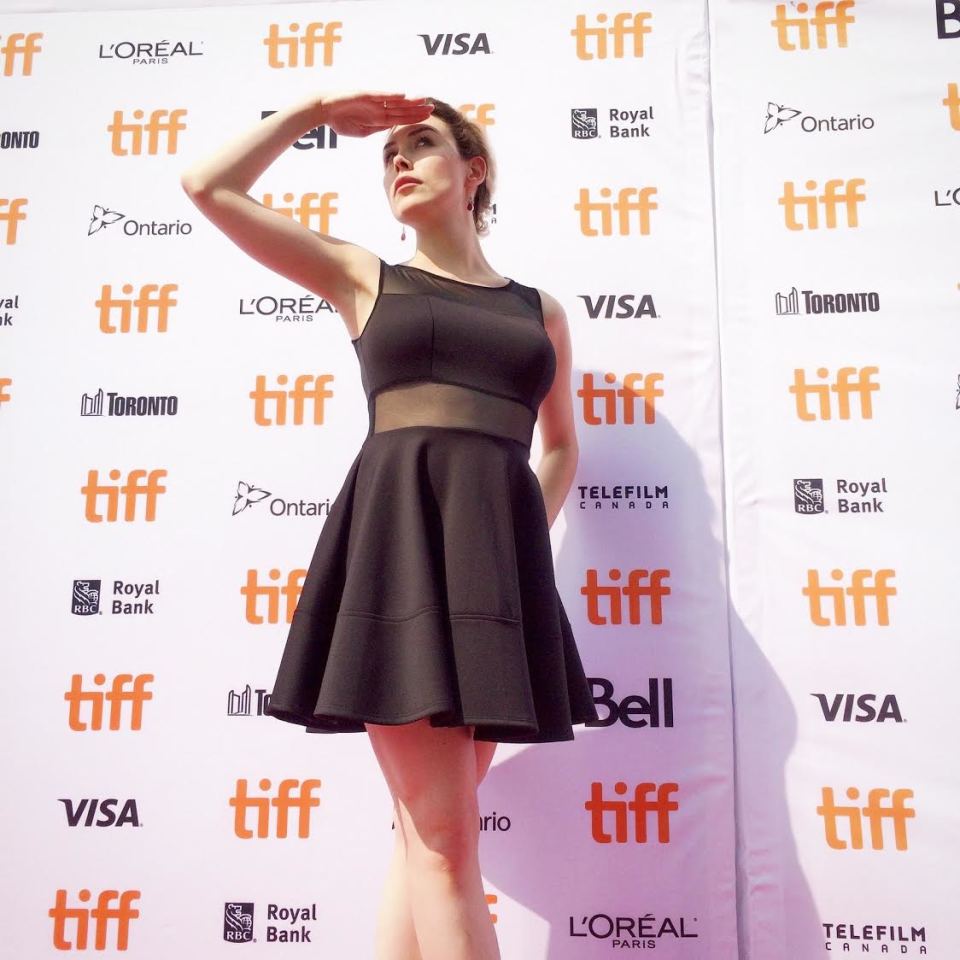