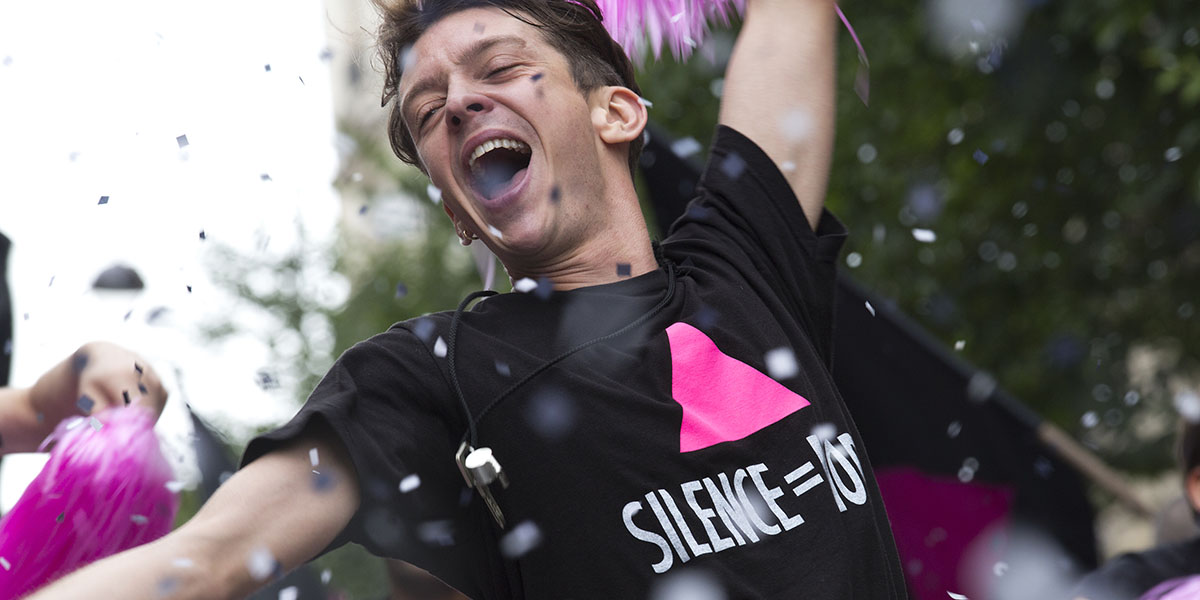 “There have been two things that have been very important in my life: cinema and AIDS,” says Robin Campillo, sitting in a director’s chair in TIFF’s Studio 9 during the final interview of what he describes as an exhausting press tour for his new feature, BPM (Beats Per Minute). Now playing at TIFF Bell Lightbox, Campillo’s autobiographical third feature portrays his formative years as an AIDS activist in the Paris chapter of ACT UP in the early ’90s. A direct action LGBTQ organization formed in the same spirit as Larry Kramer’s original New York organization, ACT UP’s powerful blend of grassroots activism and political radicalism changed the stigma of HIV/AIDS during a time when silence equalled death.

BPM is the 55-year-old writer-director’s most personal work yet, and a difficult topic to tackle. Says Campillo, “I didn't want to fail [at making a film] about this subject because it was so important to my life.” While his previous features as director, Eastern Boys (2013) and They Came Back (2004), were also delicate dramas that reflected themes of gay relationships and stigmatization against groups that want to integrate into society — in They Came Back’s case, that group was the undead — they didn’t directly allegorize his own life. Campillo has collaborated closely with director Laurent Cantet for two decades (as editor on 1999's Human Resources and 2014’s Return to Ithaca, a co-writer/editor on 2005's Heading South, 2008 Palme d'Or winner The Class, 2012’s Foxfire, and a co-writer on 2017’s The Workshop). He admits that it took time to understand what story he wanted to share when it came to his own work as a writer and director on BPM.

“I had this group in front of my eyes all this time, but I didn't realize that this was the story I wanted to tell,” Campillo admits. “It took me ages to understand what was obvious to me. I joined ACT UP after facing 10 years of loneliness in front of this epidemic, and because of it, I reinvented myself. The film is a tribute to the girls and guys I met in the group, but I needed 30 years to feel confident enough that I could make it the best that I could.”

BPM is, in many ways, a love letter to Campillo’s two passions, cinema and AIDS activism, filmed with an intimate understanding of the connection between sex and death. What begins as a docudrama about the political work of ACT UP gradually brings into focus the love story of two young activists who become drawn to each other. Sean (played by the puckish, charismatic Nahuel Pérez Biscayart) is an acerbic political radical who is HIV-positive, while Nathan (the dishy Arnaud Valois, who embodies empathy in the many scenes where he listens rather than speaks) is keen, new to the organization, and HIV-negative. Sadly, as Sean’s symptoms worsen, their teacher–student dynamic will tragically become one of patient–nurse.

Wry and hopeful when it could be sad, funny and crude when it could be furious, BPM develops Sean and Nathan’s relationship in slow, careful detail, as the two steal moments of private conversation amid ACT UP’s charged, volatile group debates. They lock eyes on the subway after a political demonstration (having just hurled condoms filled with fake blood against the glass walls of a medical corporation supposedly working on an AIDS cure). Their first kiss happens in front of a snarky teenager they lecture about condom use. And when Sean is finally placed in a hospital, Nathan provides an under-the-bedclothes handjob to give his friend and lover a brief escape from pain.

The centrepiece of the film is a long sex scene. Captured in the near dark with languorous handheld cinematography that never feels exploitative, Sean and Nathan’s first time is a constant negotiation of what they can and can’t do with each other’s bodies. Afterwards, a post-coital pillow talk allows Sean to make a vulnerable admission of how he first contracted AIDS at age 16. As he speaks, the camera travels down to reveal the high-school teacher who first took his virginity and transmitted the disease to him, seen beside them as an apparition in the dark.

When asked how he created such an intimate yet visually stunning sex scene, Campillo explains: “I told my actors: ‘Don’t be afraid; it's not a pornographic film, but you have to play everything. I have to feel the feeling of penetration, how you put a condom on, the way you wipe away someone’s sperm, all of those things.’”

He credits his cast, which took him nine months to find, for discovering an intimacy he couldn’t have anticipated. 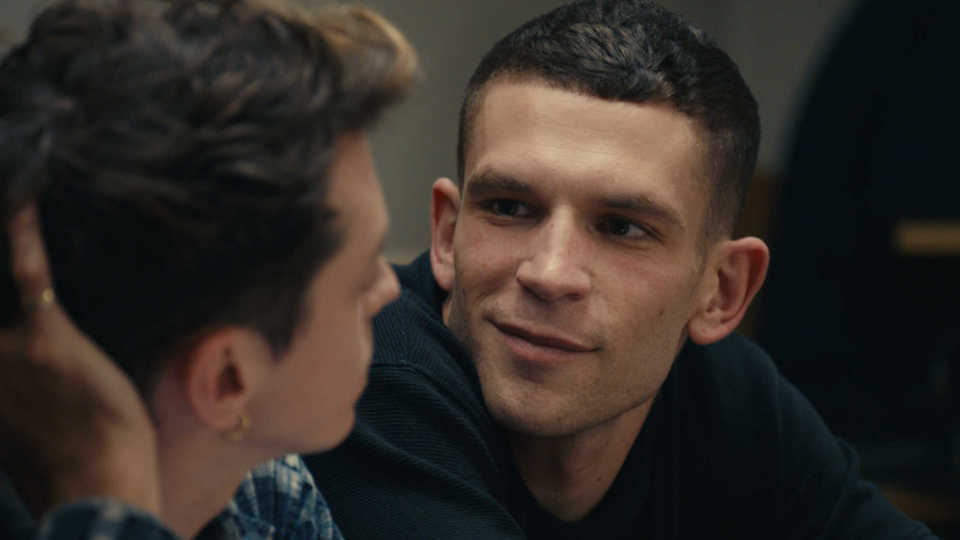 We are all the product of our relationships as lovers leave behind fingerprints, scars, and ghosts. For Campillo, whose foundation of his queer identity came in tandem with the AIDS crisis of the ’80s and early ’90s, this fact is bittersweet, as well as traumatic.

“It was in the early ’80s when I saw the first articles about the AIDS epidemic in the United States, and by 1982 I was really afraid,” he says. “At that moment, I didn't know many gay men, but I had a gay boyfriend who died. We were all little bit in the closet, so when [he] went into the hospital, I was not invited him to see him. I didn't know for four years if my first boyfriend was dead or alive.”

The making of BPM has led to an opportunity for Campillo to speak with the doctor who treated that man before he died.

Explains the filmmaker: “As a tribute, I decided to show his face in a photograph at the beginning of film. After BPM came out in France, I received an email from his doctor who’d seen the film and recognized the guy he took care of. Now I’m going to talk to him about how he died. I can't imagine… it was 35 years ago, and that was our reality. It’s like we wear our intimacy, our lovers, and our love stories around our necks.”

There are many striking images in BPM that convey the personal and political pain of AIDS — a bird’s-eye view of ACT UP members lying on the street holding crosses during a group demonstration; the way Campillo films mutating T-cells like floating jellyfish, slowly accumulating more black and sickly spores; the Seine river seen at daybreak, flowing with crimson blood — but the film’s most moving tribute may be its emotional use of house music. Having acquired the rights to Bronski Beat’s 1984 synthpop anthem “Smalltown Boy,” Campillo and composer Arnaud Rebotini decided to remix it as a sparse, haunting house anthem with a delicate flute and pulsating keyboard arrangement. The song plays repeatedly to devastating effect throughout the film, including two clubbing scenes that show the members of ACT UP moving and kissing on the dance floor. For Campillo, “Smalltown Boy” embodies the AIDS crisis itself.

As he explains: “(Bronski Beat singer) Jimmy Somerville recorded ‘Smalltown Boy’ and he gave money to Didier Lestrade (the creator of ACT UP Paris) to help us to exist. When I got into ACT UP in '92, I went to a concert he did to raise money for the group. I remember everyone around me crying because this song, which was so important to us, had existed before the epidemic hit. I had wanted to [dramatize] this moment in BPM, but Jimmy Sommerville didn’t want to be filmed. Instead, he gave us the multitrack tapes of his recording so Arnaud and I could make a remix.”

The exuberance of dancing to house music, more bodies moving in the darkness, became the inspiration for the title of the film.

In addition to making its North American premiere at TIFF ’17, BPM has been met with both commercial and critical success in France, where it won Cannes’ Grand Prix. Its acclaim proves — during a year in which Moonlight won the Academy Award for Best Picture and Luca Guadagnino’s Call Me By Your Name is being hailed as a new coming-of-age classic — that queer cinema can have a place in the mainstream. In fact, Campillo says that getting BPM financed was surprisingly simple.

“When we searched for money to make the film, it was strange how easy it was to find it,” he remarks. “ACT UP was a little bit famous in the ’90s, so when we said, ‘We are going to show you how it works inside.’ People were really interested. Now the film is doing very well in France, even though it’s very long [it has a 140-minute running time], you have a very long sex scene between men, we don’t have many stars, we are talking about AIDS, and we are talking about treatment. It works — not only in Paris.”

With queer identity at the forefront of the ongoing discussion of representation in film, it’s no longer enough for filmmakers to simply create LGBTQ characters. The world demands films that speak in their own, singular voices.

“Queer filmmakers can’t be obsessed with this idea of showing a good image of ourselves,” he says. “When I made this film, I didn't think at any moment: ‘I have to be universal.’ I wanted to be honest with who I am — both politically and sexually.”

He concludes: “There needs to be a cinema of the first-person, a cinema that says I."

Canadian Cinema Made Me Gay