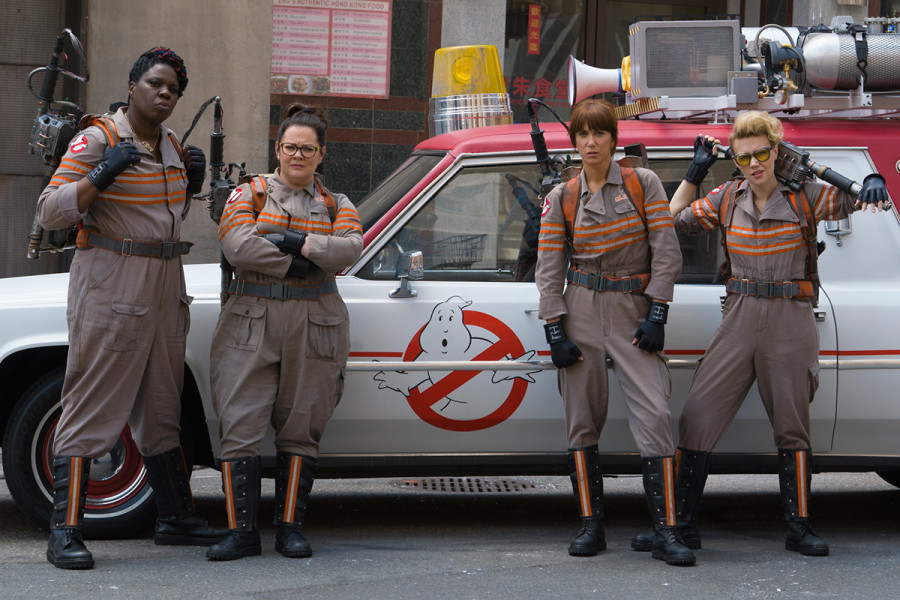 I Always Wanted To Be A Ghostbuster

There are a few early kindergarten memories that have haunted me well into adulthood. The first consisted of claiming my purple jeans and floral turtleneck were my “sexy outfit” and wearing it to impress my crush until my mother made me stop. The second was being shoved to the ground during a game of Ninja Turtles and being told that I wasn’t cute enough to be April O’Neil so my options were to be Irma, April’s nerdy klutz of a best friend, or her dog, a character that my previously mentioned crush created just for me. So lucky! But that was what life was like for girls in 1980’s suburbia. If you weren’t sexy, you might as well be a dorky secretary or a dog.

Ghostbusters came out the year that I was born with a sequel released in 1989, which meant that my final year of the ‘80s was spent being the quintessential Ghostbusters fanboy. I played with my brother’s Ecto-1 and his four *Ghostbusters *action figures, despite living in peak “boys wear blue, girls wear pink” times. Male action figures were my heroes because I was too young to understand representation and how good it feels when you get it. All I knew was that in Ghostbusters 2, the two female characters were a secretary, in the form of the sharp-witted Janine, and poor, overly-sexualized Dana, possessed by a demigod named Zuul that took a lifeform eerily similar to a dog. My options seemed limited, so it’s no surprise that by the time of my Senior Kindergarten graduation, when asked to draw a picture of what I wanted to be when I grew up - I chose secretary.

It’s not Ghostbusters 2 fault, entirely. I went to a screening of Back to the Future, Part II with a Barbie doll in my hand and left wanting to be Marty McFly. I never thought, “What did Jennifer do while Marty was time traveling?” When I wanted to become a boxer after watching Rocky, I never once thought about what Adrian’s goal would be if she had her own crescendo-building montage. All of my favourite films as a kid - Psycho, The Birds, The Exorcist and The Omen - didn’t exactly feature women in the best light. My heroes forgot about me and I never questioned it.

So when finally, the all-female Ghostbusters 3 was announced, I was on-board as a fanboy, even though I was now a woman in my early 30s. A true fanboy wants to squeeze everything they can out of their beloved franchise. It was purely out of nostalgia and a curiosity to see what my favourite Saturday Night Live actors could do as the modern day Venkman, Ray, Egon and Winston. As controversy surrounding the film grew online, I was able to brush it off as a problem for whiny man babies who just can’t handle their nostalgia being messed with. And believe me, I get it. I lived through a terrible reboot of Indiana Jones and all first three episodes of Star Wars; I was prepared for the worst. I expected bad reviews from hardcore Ghostheads and I expected to battle with people if I liked it.

What I didn’t expect to do was cry.

From the moment Ray Parker Jr.’s Ghostbusters theme song played with Kristen Wiig, Melissa McCarthy, Leslie Jones and Kate McKinnon in the Ecto-1, I couldn’t stop weeping. I cried when McKinnon’s Holtzmann pulled out her double proton guns (with that theme song playing again, oh the tears!) and in slo-mo, single-handedly defeated every ghost around her. A nerdy engineer with frizzy hair, glasses and a weird penchant for doing voices was my childhood heroine at last, in loose-fitting coveralls. I sobbed when Jones’ Patty acknowledged that they didn’t save the day for the pissed off fanboys online, but for girls like me. “Someone knows what we did for them,” she says as the four women hug and look out at Manhattan, lit up in “I<3 GB” lights. Patty was telling us, the little girls of the ‘80s and ‘90s who were sold Barbie’s “We Girls Can Do Anything” board games, while still being shown films where female heroines wore shirts ripped in all the right places, that we could be unglamorous and unsexy and still matter. Ghostbusters 3 showed us we were owed this and that we deserved it too. And that’s the funny thing about representation — it feels like getting permission. It’s like someone admitting, “Hey, I feel that way, too.” You’re allowed to want to be included. And that feels really, really good.

So I continued to cry. I cried until the end of Ghostbusters 3. I cried for little girls in 2016 who would be able to see a woman rise above her career failures and create her own success through Erin Gilbert. I cried for women who would understand that you can be a Patty Tolan, valuing yourself for your book smarts and be confident, despite working a job where you are often ignored. I cried for the weirdo girls, the Jillian Holtzmann’s of the world, who could be unapologetically odd because they have a role model who is focused and cares about outdoing herself by constantly inventing new ideas and technology from what was right in front of her. I cried for every female who could see four women on-screen who could maintain a friendship without ever talking about boyfriends, their looks, or shopping.

I confessed to my colleagues that I couldn’t stop crying. Then I went home and continued to weep. I went back for a second screening and cried again. I felt a weird sense of jealousy, yet happiness, for all the little girls who would tell their families they wanted to a Ghostbuster at their Senior Kindergarten graduation. I always wanted to be a Ghostbuster. I just didn’t know it was an option.