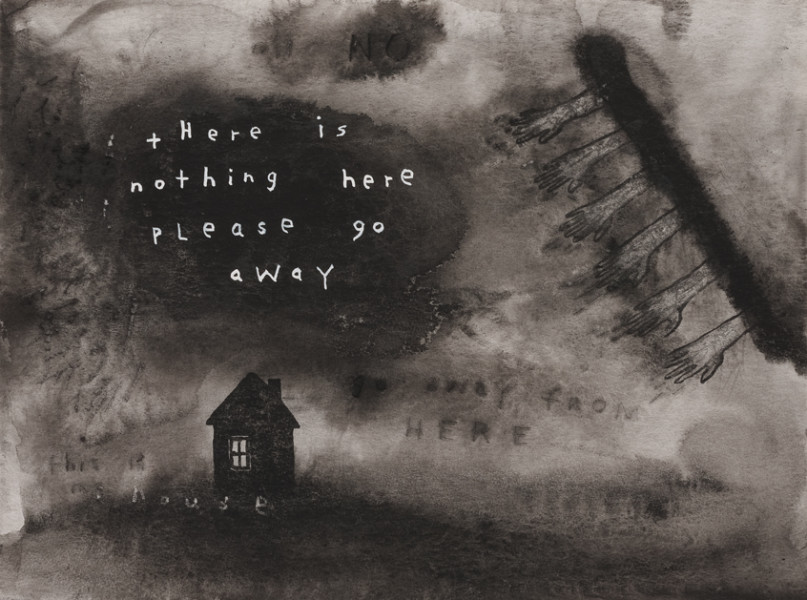 In anticipation of the May 21 premiere of Twin Peaks Season Three, we are running a series of articles exploring the roots of David Lynch’s unique artistic vision. The following is adapted from David Lynch: The Unified Field (University of California Press and PAFA, 2014) by Robert Cozzolino, the curator of the same-named exhibition of Lynch’s artwork at the Pennsylvania Academy of the Fine Arts. Republished with the permission of the author.

David Lynch is an artist who happens to make film as part of his expression. His films are inseparable from his identity as a visual artist; they are painter’s films, concerned with issues that arise from his sensitivity to composition, texture, formal relationships, and how subjects are enhanced by their presentation in a particular style.

Lynch’s approach to cinema reveals someone sensitive to the emotional impact of design and the capacity for materials to carry meaning. He told an interviewer, “Film tells a story. But abstract things are important to a film.” Accordingly, he has suggested that dialogue-heavy film takes away from the power of film. “Real cinema does not rely on dialogue at all. In fact, it would have no dialogue. The possibilities of dialogue are limitless, but the trouble is it’s usually used simply to tell the story rather than as a shading device.”

An extraordinary example of Lynch privileging visuality over narration and dialogue occurs in the first few minutes of Blue Velvet. Through a series of images, some practically still, the whole tone and major theme of the film is established as the viewer is transported from the clean, colourful, and fresh neighborhood streets to the writhing drama of fertilization, violence, and decay beneath the surface.

As in much of his film work, nostalgia, childhood, and home, with its myriad implications and associations, are themes that appear in Lynch’s artwork. Place has played a critical role in his identity and biography, and strong emotional ties to the places of his childhood and Philadelphia have driven settings in his work. In many works, Lynch examines and asks what connects or disconnects us from place and how our relationship to where we live shapes us. How do we shape the places we inhabit through actions or our psychology? These are issues Lynch is close but about which he has revealed little, preferring to have ideas suggested through his imagery. “[Home] is a place where things can go wrong,” he says. After all, his Philadelphia home was broken into three times — on one occasion in the middle of the night while he and his family were asleep. 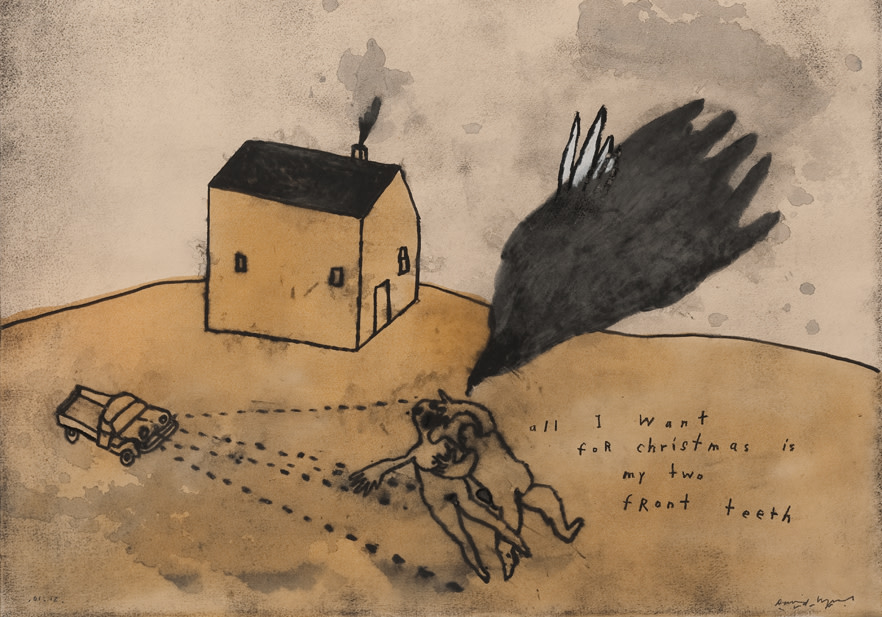 Many interviewers have probed Lynch for clues as to why his work deals so often with violence, sexuality, and the potential for something sinister to be discovered in one’s backyard. He has had to caution and reassure interviewers that he had a happy childhood, repeatedly combating the notion that biography has a direct relationship to the kind of work an artist produces. His awareness of the world and its nuances came from exploration rather than anything actually experienced:

My childhood was elegant homes, tree-lined streets, the milkman, building backyard forts, droning airplanes, blue skies, picket fences, green grass, cherry trees. Middle America as it’s supposed to be. But on the cherry tree there’s this pitch oozing out — some black, some yellow, and millions of red ants crawling all over it. I discovered that if one looks a little closer at this beautiful world, there are always red ants underneath. Because I grew up in a perfect world, other things were a contrast. I saw life in extreme close-ups. In one, for instance, saliva mixed with blood. Or long shots of a peaceful environment. I had lots of friends, but I loved being alone and looking at insects swarming in the garden.

Accordingly, Lynch credits children with understanding a great deal more than adults assume they do; their receptivity to emotions and what remains unspoken contributes to the shaping of identity and a kind of visual intelligence. He notes: “No matter what type of childhood you have, there’s a feeling that you’re sensing more than what you’re seeing in front of you. That’s one of the things I remember from being young. A lot of information comes to us, not in the form of words or pictures, it’s a feeling in the air.”

In drawings such as All I Want for Christmas is My Two Front Teeth, the title and lyric from a child’s novelty song is juxtaposed with two figures fighting in front of a house. The relationship could be a play on one figure having their teeth knocked out in the brawl, but it could also emanate from a watching child witnessing domestic abuse. In other images of houses, from the 1980s through the present, Lynch sets up a wide range of evocative scenarios, the narratives of which are left open for the viewer to interpret. Shadow of a Twisted Hand Across My House, Suddenly My House Became a Tree of Sores, Who is in My House?, and* There is Nothing Here*, Please Go Away take apprehension, a feeling of menace, and the possibility that “things can go wrong” as their premise.

Perception plays a role in some: Is there really someone in the house (or outside), or is it the mind playing tricks? Why does the shadow resemble a hand? These are ways of reconfiguring the world that relate to Lynch’s sense that mystery plays an important role in childhood — something we need to recapture. “When you’re a child, something as simple as a tree doesn’t make sense,” he says. “You see it in the distance and it looks small, but as you get closer it seems to grow — you haven’t got a handle on the rules yet when you’re a child. We think we understand the rules when we become adults but what we’ve really experienced is a narrowing of the imagination.”

Lynch also incorporates crude writing into his work that appears on the verge of disintegration. Those effects contribute to an alternate conception of beauty, one that is connected to childhood and first experiences with art and language. “There’s something that happens when a text starts breaking apart or becoming childlike,” he says. “The world expands and starts to feel like a dream. Simple childlike things can become absurdities, and can even conjure up bigger things, which are more precise than well-formed paragraphs. Something organic occurs in childlike things. There’s so much freedom.” 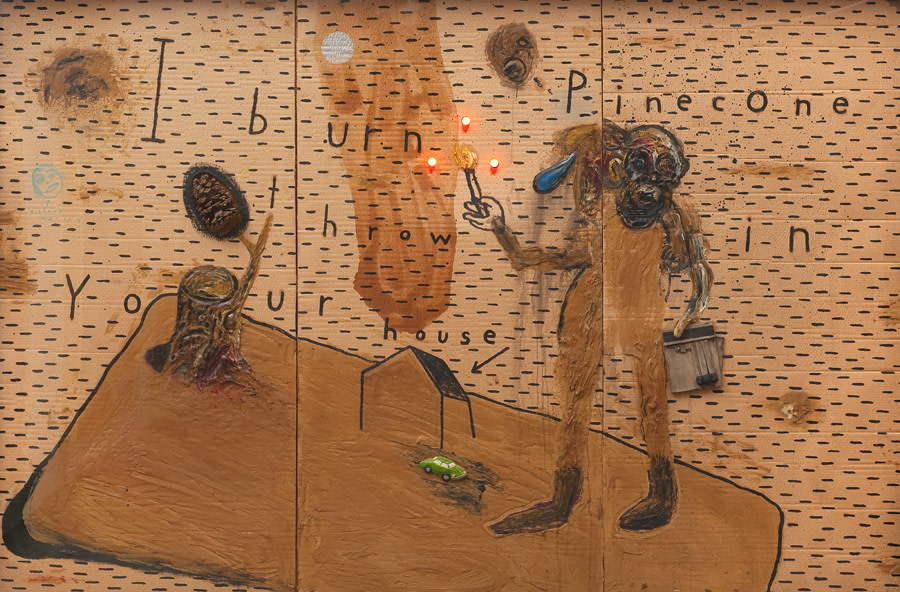 I Burn Pinecone and Throw in Your House, 2009. Mixed media on cardboard, electrical system, and bulbs framed behind plexiglass, 72” x 108”. Courtesy of the artist and Galerie Karl Pfefferle, Munich, Germany.

Lynch’s paintings of the last 20 years are both horrifying and fascinating. They include imagery in which the mouth — wet and sloppy — devours, drools, and is stuffed with indeterminate matter. In many works, it is difficult to tell where the body’s borders are, and whether the dripping substances are ejecta or something to be consumed. The humour is unnerving — as in a monstrous figure declaring, “I burn pinecone, throw in your house,” or a woman with a broken neck and electric knife telling her husband to “Change the fuckin’ channel fuckface.” In another large painting, two swollen masses of paint and possibly putty splayed together represent a couple named Bob and Sally making “love” — although Sally is being loved brutally “until she is blue in the face.”

These characters enact a grotesque existence that brings out the absurd Lynch finds in the world, and shows his connection to what Julia Kristeva called the Abject. This concern with the body’s limits — which runs from Lynch’s mechanical women and Six Men Getting Sick in the 1960s, to the excesses that multiply on the surfaces of recent paintings and in Inland Empire — connect Lynch with a wide range of his contemporaries, including Paul McCarthy, Cindy Sherman, and others.

For nearly 50 years, David Lynch has been making art that has explored all aspects of human experience and the intricacies of our desires. Although his work has been interpreted extensively, he himself prefers to be reticent about meaning: “It’s better not to know so much about what things mean or how they might be interpreted or you’ll be too afraid to let things keep happening.... Psychology destroys the mystery, this kind of magic quality. It can be reduced to certain neuroses or certain things, and since it is now named and defined, it’s lost its mystery and the potential for a vast, infinite experience.” Lynch has tried to reconcile opposites about human nature and the broader world in his work, bringing them together in unexpected ways. “We live in a world of opposites, of extreme evil and violence opposed to goodness and peace,” he notes. “It’s that way here for a reason but we have a hard time grasping what the reason is. In struggling to understand the reason, we learn about balance and there’s a mysterious door right at that balance point. We can go through that door anytime we get it together.”

*All images courtesy of David Lynch. *

“Suddenly My House Became a Tree of Sores”