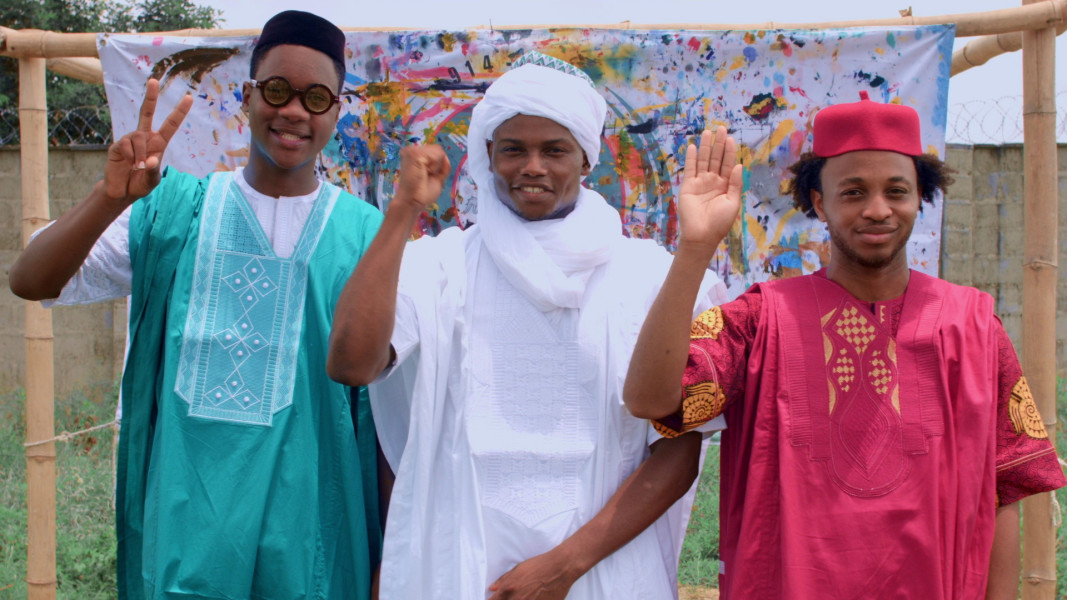 Much of Green White Green, the first feature film from 33-year-old director Abba T. Makama, which premieres Sept. 14 at Isabel Bader Theatre, is narrated by a professor at work on an experimental book about what he calls the new Nigeria. This is the country inhabited — but also manifested — by Uzomma, Segun and Baba, three millennial-aged friends trying to figure out their place in the world and a fun way to kill time before the end of summer vacation. In Makama's movie, both struggles take place on the same plane. Eventually Uzomma, played by Ifeanyi Dike Jr., comes up with a project that will address both: the group will make their own movie, a "mosaic" that will show the variety of life in the world that they know.

As the shoot unfolds, their own lives both confirm the professor's theories and evince the sort of restlessness that almost always eludes academic prose. These kids discuss Frankenstein, debating whether the book is an allegory for Biafran separatism or a multi-cultural co-existence. They also argue over popular music. Though the characters themselves prefer artists like Jay-Z and William Onyeabor, the song I kept thinking of was "Panic" by The Smiths. Why do they make a movie? Like Morrissey says: “Because the music that they constantly play, it says nothing to me about my life.”

Makama made his film for the much the same reason. Before the festival began, he and his lead actor Ifeanyi Dike Jr. discussed Nigerian coming-of-age stories, their love for Woody Allen and Wes Anderson and the best way to approach their incredibly fun, accessible film.

Green White Green shows a group of kids trying to figure out, among other things, how they relate to the idea of Nigeria. Is that something you've struggled with?

Abba T. Makama: With the kind of upbringing I had, I never saw anyone in terms of their ethnicity. I went to a very diverse school. My parents were open-minded, so I never had this sense of "this person is different from another." It's only as we get older that we get this illusion and you see that a lot of people see things in black-and-white. Ethnic prejudice was quite prevalent among the older generation. You want to date someone and your mom is like, "All right, is she Igbo? Is she Yoruba? Yadda, yadda, yadda." Personally, I've always seen myself as a citizen of this planet, then a citizen of Nigeria. I just felt this was something important that I needed to say. It's something important that our generation needs to hear.

Funny enough, I don't belong to any of the major ethnic groups. I'm from Plateau State, which is regarded as the Middle Belt, so I am like a minority. I do speak Hausa, but I'm neither Hausa, Yoruba or Igbo. I'm a Nigerian, first and foremost. And I felt that creating the diversity of the ethnicities alone, just playing on that, would give the story a lot of depth. I also made reference to the elite. The elite do not see in terms of ethnicity, they only see in terms of class and money. So you have everybody at the end of the food-chain fighting, saying, "I'm Biafran," and this thing or that. But the one-per cent just think from an economic and monetary point of view.

__When did you start working on the film? __

Makama: I had a first draft of this script in 2005 when I was in college in upstate New York. I didn't like that draft. I destroyed it. The original idea was drama. It didn't have any humour. It was much more serious. I called one of my creative partners, Africa Ukoh, and I drafted a 30-page treatment and I said, "Can you please help me flesh this out?" That's how we began writing. It was early January, 2015.

Ifeanyi, when did you get involved?

Ifeanyi Dike Jr.: I auditioned around March of last year. I almost missed the audition because I have a medical background. I was working in a hospital as in intern in the obstetrics and gynecology department. I was more interested in one of the other characters because it was my first feature film, too. If I got selected, I didn't want to be burdened playing the lead, but I met with Abba and I learned that we had a lot in common, just in sensibility. So I got the script, studied it for a month and we started shooting in April. That was it, we shot for three weeks.

What excited you about Abba’s script?

Dike Jr.: In Nigeria, we rarely have any lead characters that are boys or girls, that are young. Or films that are about people who are growing up and coming-of-age, which is quite the opposite of the Western world. Here, the central characters were young people, and the story was about these guys from all over Nigeria who are trying to make it in life, which is basically the situation I'm in right now. I thought that it was interesting to explore that journey.

Are you still practicing medicine?

Dike Jr.: I'm not. I'm resuming at UCLA for my graduate acting degree. In a couple of weeks, actually.

Music is a big part of this movie. There's a lot of Beethoven and instrumental hip-hop, and at one point the characters argue over William Onyeabor. What story were you trying to tell through the songs?

Makama: My music taste is quite eclectic, just like almost everyone else's in this day and age. We listen to different things, from Cities Aviv to Death Grips to William Onyeabor to Radiohead to Fela Anikulapo Kuti. But I have a friend who makes beats, he grew up in my hometown. We contacted him and everything he gave me was in-tune with this picture. Initially, I wanted to edit the film almost like a hip-hop music video, which I decided to tone down. I also got chunks of the music just from sourcing it from royalty-free libraries. I think classical music and film always works. It doesn't matter whether the film is shot in Nigeria, Afghanistan, or wherever. It's so strange how classical music always works with visuals. I think Kubrick made some mention about this.

But the music definitely does drive the narrative. There's this one song that plays after the opening credits, when you first see Lagos. It was a popular hit song during the 1980s, "Nigeria Go Survive" by Veno. The artist was literally off-the-radar for years now, and I tried really hard to track her down. Eventually we did, and we were able to clear that. 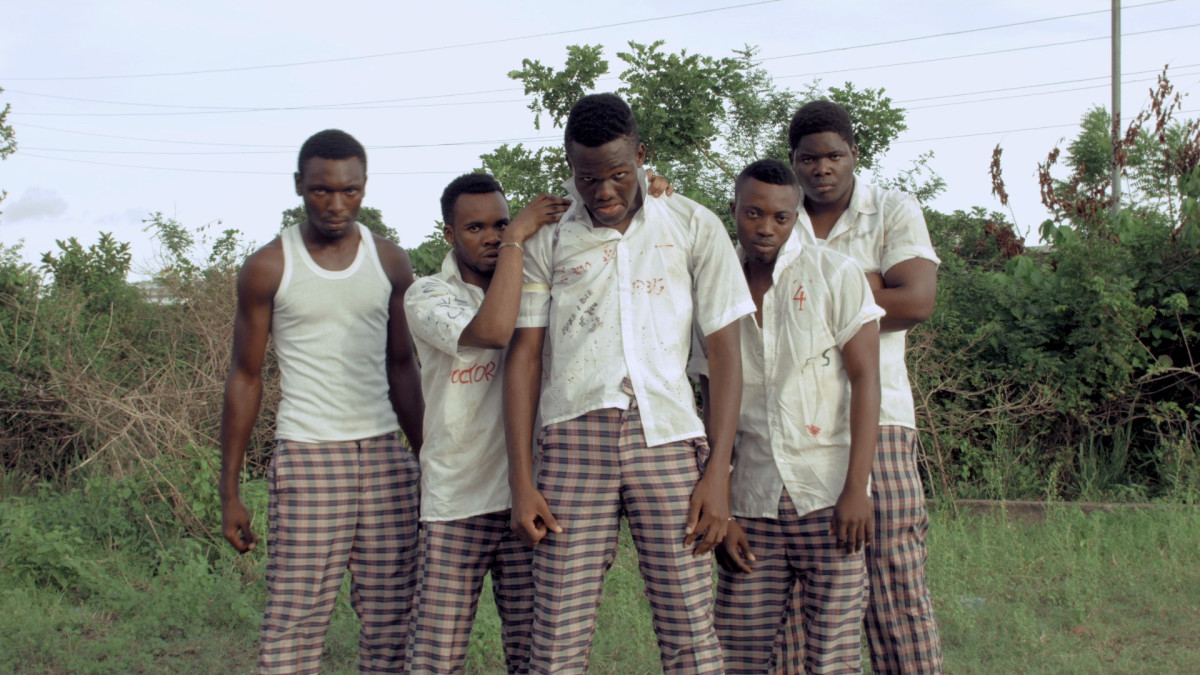 Did you have other films you looked to for guidance or inspiration?

Makama: I wasn't looking at any film in particular, but I wanted to do something in the same vein as George Lucas' American Graffiti, for Nigerians. I think prior to American Graffiti, there wasn't really any film that explored youth culture in that way. I may be wrong. But as I said, young people in Nigeria don't have this one movie that they totally can relate to and say, "Oh, this was my favorite character. I relate to this character. And I want to be like this character." Visually, the way pictures are framed, I might have been inspired by someone like Wes Anderson. The frame on a lot of these shots is very picturesque and symmetrical.

Dike Jr.: To prepare, I watched a lot of Wes Anderson films. They often have this flat, kind of 2D surface, so I feel like the actor had a lot of responsibility for bringing these supposedly flat surfaces with colorful backgrounds to life. I studied The Grand Budapest Hotel and maybe two or three others to prepare. In the back of my mind, I was also looking at Woody Allen. What I like about Woody is that he created this style on his own that does not correspond with anyone else's, and he was so confident with that. The actors in his films knew that, too. Because Abba's film was very different from everything that I had seen, I knew that I had to be confident in my style.

Makama: I agree about Woody Allen. Woody Allen is one of my favorite filmmakers. I love the back-and-forth and the dialogue. Quite witty. We definitely drew from that, even if it was indirectly and unconsciously. Consciously, I was inspired by Michel Gondry's Be Kind Rewind, about these guys who work in a video store and are trying to recreate all those classic VHS movies that were destroyed. They do it on a zero budget, with their own style. I'm also inspired by Federico Fellini a lot, just in terms of improv. We had a locked script, but I knew, considering the way Nigeria is, there would be many unforeseen factors and we wouldn't have the time and luxury to shoot everything that was in the script. I knew I'd need to have actors who were sharp and could go off the grid.

Is there anything that people might miss if they're seeing the film at TIFF and have never been to Nigeria?

Dike Jr.: I think the best way to go into watching Green White Green is completely blank. Even for me, it was such a surprising thing to see how everything came together. It's not like a traditional Nollywood film — I know we've said this over and over again. And what is a traditional Nollywood film anyways? This is a film that comes off as easy and enjoyable. I wouldn't want anyone to go into it expecting to learn everything about Nigeria or how films are made in Nollywood. It really is just a film that has brought together a couple of young minds who wanted to go on a journey. I really want people to watch it as a celebration of what we aspire to and what we want the world to see, as far as our story is concerned.

Makama: I definitely made this picture to show not just Toronto audiences but to show the world — especially people who have this notion of Africa or Nigeria being a primitive place where we live in huts, or whatever — that we make cool stuff. We make — forgive me, for a lack of a better word, but we make cool shit, man! I was trying to make a cool film and show that there's vibrant life, there's talent, there's culture. This is what it is. There's beauty in the madness.