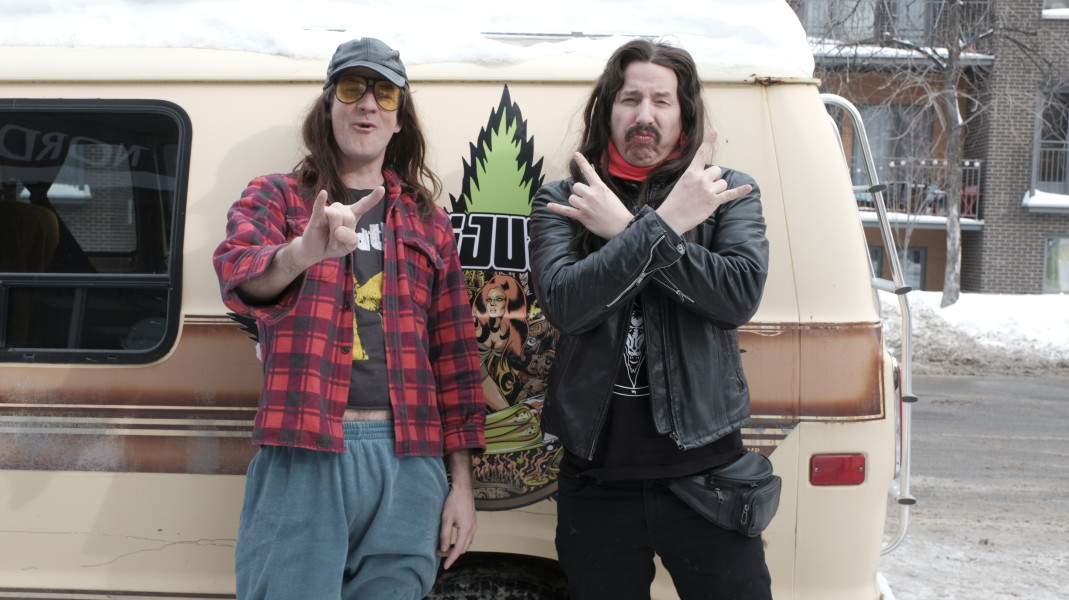 Canada’s greatest headbangers, Terry and Dean, have returned. The duo — who wormed their way into our hearts via Michael Dowse’s debut film FUBAR (2002) and its sequel FUBAR 2 (which made its world premiere at TIFF’s Midnight Madness in 2010) — remain unhinged hosers who never encountered a Pilsner they couldn’t shotgun. Now their new VICELAND series FUBAR: AGE OF COMPUTER finally gives them access to high-speed internet. Filmed in the same lo-fi mockumentary style that made the series a cult favourite, each episode of AGE OF COMPUTER sees Terry (David Lawrence) and Dean (Paul Spence) explore the dark corners of the web in a suburban Calgary basement.

Having once resorted to maxing out credit cards to get the original FUBAR made 16 years ago, director and showrunner Dowse is now one of Canada’s leading comedy auteurs. His delightful run of comedies, including It’s All Gone Pete Tong, Goon, and The F-Word, demonstrate how the genre can thrive on Canadian soil with heart, pathos, and style. We spoke to the filmmaker at VICE’s Toronto offices to discuss FUBAR’s lasting impact, what happens when you give a hoser your wifi password, and the new crop of Canadian filmmakers he’s inspired by.

What stage in your career were you at when you decided to make the original FUBAR?

I'd done a couple shorts. I was a member of the Calgary Society of Independent Filmmakers. I'd had some success. I was the MuchMusic temp for a summer. They gave me some cash and a car that I sold immediately, but, most importantly, they taught me how to use an Avid.

I had tried to make a feature the summer before FUBAR and I was not happy with it. I'd done everything by the book: assembled a crew, rented a house, written a proper screenplay. The movie was okay, but it wasn't memorable. I had cast Dave [Lawrence], and we’d talked about headbangers a lot. Eventually, we decided we wanted to make a film and we didn’t want to wait.

[The making of FUBAR] came out of a want to make something interesting where we focused on story, structure, comedy, and not on how it looked. It wasn’t about getting a cast and crew [together] and waiting for money. We just said, "We're gonna start shooting in August." I wanted to make something that used our lack of money to an advantage, which was the fake documentary format.

FUBAR had a rawness and a wildness that was uncommon in the Canadian films at the time. How was your movie first received?

TIFF turned it down, so we were fucking devastated. When we got into Sundance, that was the big moment where we were like, “We've got some legs now." There was a certain snobbery around Canadian film back then that probably still exists. People look down their nose at comedy, which is totally unfair and unwarranted because I think FUBAR is not only funny, but has more heart than most Canadian films.

Did you relate to the art house-style films that dominated Canadian film in the decade leading up to FUBAR?

Some of those movies are great, like Léolo and The Adjuster, but I did feel like there was a preference for art movies that nobody could relate to. There was an opportunity to make films that were more populist and actually related to Canadians. What's nice about comedy is that people tend to care about the characters a little bit more and it actually opens up a space to have more heart in the film. I found a lot of the Canadian films at that time quite cold and austere. I thought if you made a good Canadian film that was funny, people would really adopt it and get behind it, and that's what happened.

Terry and Dean embody such a distinct Canadian archetype, which FUBAR introduced to the rest of the world. Did you grow up with headbangers and hosers?

I grew up in Calgary and there was a high school called Lord Beaverbrook we used to call “Lord Bangerbrook.” There were bangers in my junior high and high school, we had a great reverence and fear of them. I remember going to my first concert, which was AC/DC in grade 9, and I took the LRT home and saw it get trashed in front of my eyes by a gang of headbangers. They're just fucking free beasts.

Since the original film, you've made a FUBAR sequel and now a new TV show. Why do you keep returning to these characters?

I think audiences want to see more. It's been seven years between each of these projects, and people still really love these characters who speak from their heart and don't give a shit.

It's a great concept to show them learning how to use the internet.

It was our way of dragging them into this century. There's something funny about the idea of how a banger would exploit the internet, how they would harness it. We did a whole meme episode where they try to make a karate video and it gets hijacked and a bunch of people start making memes out of their footage. We do an "Airjuana" episode where they come up with an idea for a marijuana drone delivery service. Then we do an episode where we take the internet away. We also thought a banger commentary on the internet could be pretty limitless when they watch YouTube clips, or shit on Reddit….

Exactly, but what it quickly became was a Tosh.0 clip show that didn’t feel right. We learned whenever they would be on the internet, it would have to drive the story. [As a filmmaker] it's getting harder and harder to avoid characters engaging with the internet, just in terms of how people communicate and get around.

How do you express it cinematically? It’s so entrenched in how we get all of our information and communicate with people, but it’s so boring to just shoot a screen.

I joke that between all the shows I do, I should have a bank of fucking over-the-shoulder shots onto a green computer. I always feel like I'm cheating, but on every single fucking thing I shoot, I inevitably find myself shooting a close-up and an over of a computer screen, or an iPhone, just trying to communicate some basic thing. It's like the old phone call. 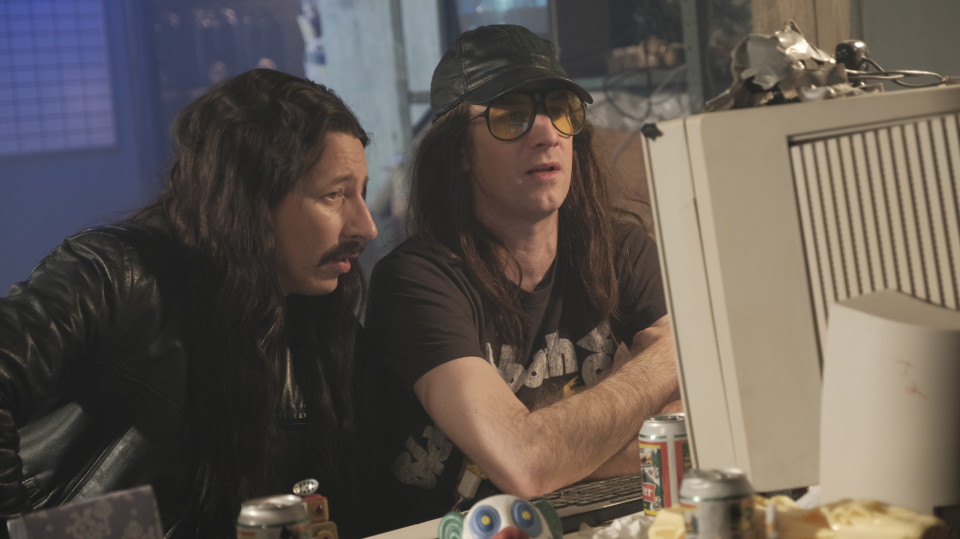 Have you ever seen a movie that does it well? In The F-Word, you turned Chantry and Wallace’s emails into beautiful montages with voiceover narration.

That’s a perfect example of “Oh fuck, how am I going to shoot this?" I'm trying to think of a version I've really liked, but nothing comes to mind. I can think of countless movies where I go, "Okay, there’s the female investigator who has been relegated to hours and hours of internet research." And you're like, “There's gotta be a better way."

In Canada, we have a strong comedic tradition in sketch and television, but not so much in feature filmmaking. As one of our country’s most successful comedy directors, can you tell us why?

Well, there are certainly more [comedy directors], but that's a good question. I think comedy is really hard to do because the fail-factor is tough. You can do a drama, and it might not connect, but if you do a comedy that doesn't work — it's fucking dead, it’s crickets. The bar is high.

It’s not like we don’t have the talent. There are so many Canadian improv groups, standups, and actors. If you think of people like Seth Rogen and Evan Goldberg, they've made some of the funniest movies ever, but they had to do it down south.

Looking to the next 150 years of Canadian filmmaking, what do you want to see change? What legacy does FUBAR leave behind?

It's not a Canadian thing, but it's getting harder and harder to make films. You need to find that sweet spot in the casting in order to get financing and with smaller films, it's getting harder to make an impact. FUBAR is a perfect metaphor for the shift to TV, which we're seeing with this weird Netflix deal nobody knows anything about. That’s another thing: people are taking their good feature ideas and making them into series.

I still think we have an amazing opportunity with Telefilm to make films and that's a great privilege. There are guys in Toronto who are making really interesting stuff, even more so than in [Dowse's current home] Montreal. Pat Mills understands the power of comedy, so does Matt Johnson. I loved Albert Shin’s In Her Shoes, and that weird musical Jeffrey St. Jules made a couple of years ago, Bang Bang Baby. I also love the Montreal films Tu dors Nicole and Felix and Meira. Making really interesting stuff is still a good way of getting to the next level, as we're seeing with Jean-Marc Vallée and Denis Villeneuve.

I just ran out of breath because I love talking about this work.

"It Just Had That Feeling Of A Real Heist"