Canadian director Ted Kotcheff emerges from the shadow of Rambo

After a six-decade career in film and television, veteran Toronto-born director Ted Kotcheff has been enjoying a late-career reappraisal that one would not necessarily expect for a director with such a diverse (and virtually uncategorizable) filmography. Nevertheless, within a mixed bag of romantic comedies, westerns, action films (and, yes, Weekend at Bernie’s), Kotcheff directed two of the finest films of two national cinemas — the 1971 Wake in Fright (a.k.a. Outback), which predated the famous Australian New Wave, and 1974’s The Apprenticeship of Duddy Kravitz, the celebrated adaptation of the Mordecai Richler novel — as well as the first (and best) chapter of the globe-shaking Rambo series.

Like his contemporaries John Frankenheimer, Sidney Lumet, Arthur Penn and Norman Jewison, Kotcheff cut his teeth directing live television drama during the medium’s vaunted “Golden Age” of the 1950s. Though he quickly moved up the ranks at the CBC — even becoming the network’s youngest drama director — his ambitions to work in American television were thwarted when a teenage subscription to a left-wing book-of-the-month club branded him as a communist sympathizer in the eyes of the US immigration services. So, like his countryman Sidney Furie, Kotcheff headed to the UK, where he directed for ITV’s prestigious Armchair Theatre as well as for the stage. 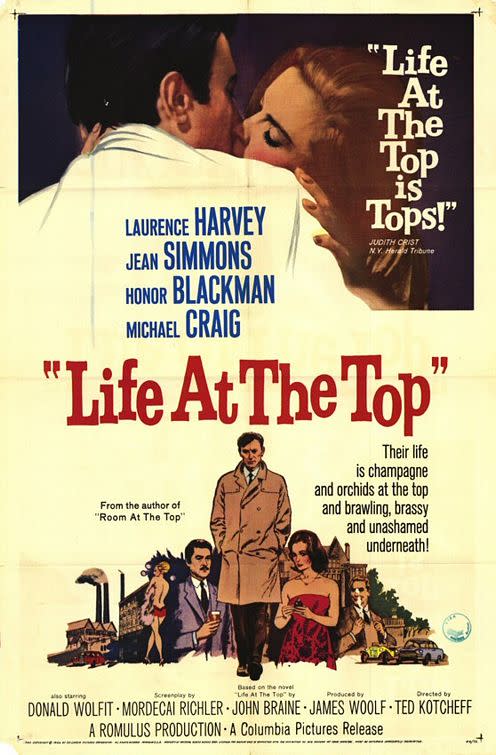 Kotcheff made his initial feature films in Britain — including Life at the Top, the sequel to the Academy Award-winning Room at the Top (and his first collaboration with Richler) — but it was upon accepting a gig Down Under that Kotcheff scored his first triumph, albeit one that took a few decades to be recognized as such. 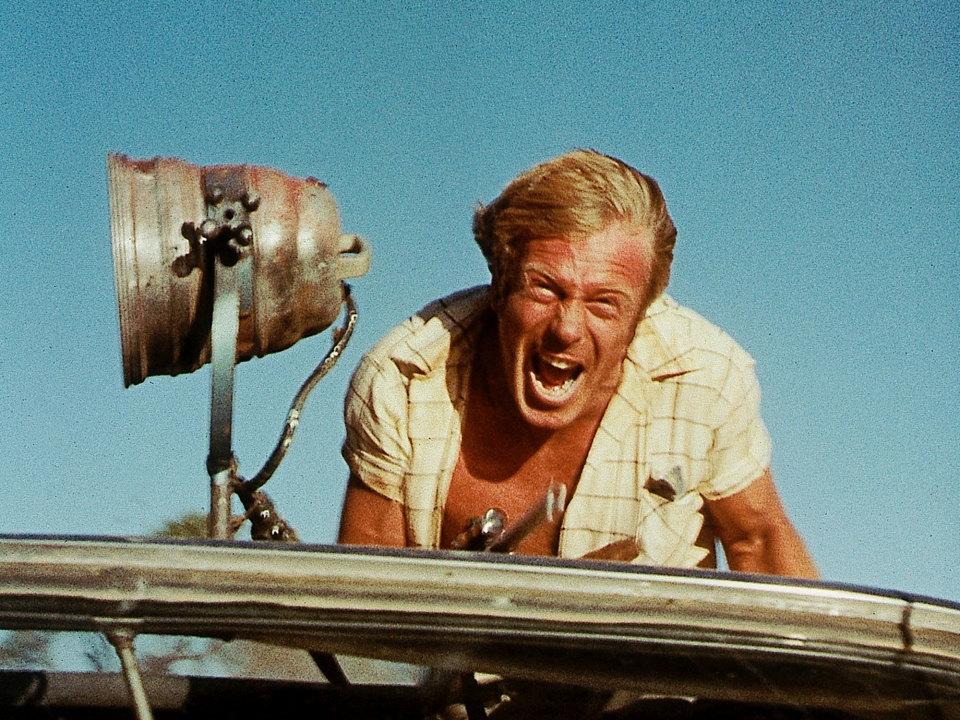 A startling story about an uptight schoolteacher’s descent into drunkenness and debauchery after he’s stranded in a remote Outback town, Wake in Fright paints a merciless picture of a macho culture steeped in alcoholism, crazed social rituals and wanton violence. This latter quality reaches its culmination when the teacher accompanies a roaring-drunk band of locals on a nighttime kangaroo hunt — a sequence that became instantly notorious for its use of real footage of kangaroo culling, which Kotcheff and his crew shot during an actual hunt.

Though Wake in Fright screened in competition at Cannes and was seen around the world, it was not particularly well-received in Australia (perhaps understandably), and subsequently disappeared from view. Never released on video, the film was considered lost for decades — but after researchers spent years fruitlessly searching for the original elements, in the mid-2000s the master negative located in a storage warehouse in (of all places) Pittsburgh, in a shipping container marked “For Destruction.” 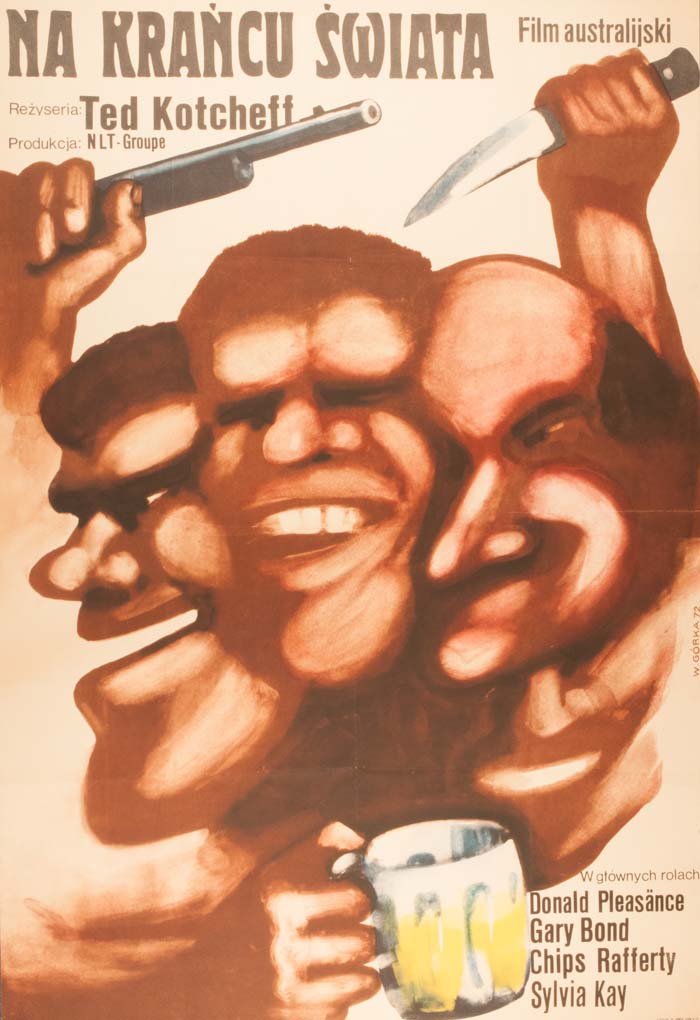 A Polish poster from the original release of Wake in Fright

Restored and presented at Cannes in 2009, nearly four decades after it made its debut at the same festival, Wake in Fright finally received its rightful recognition. In a statement at the time of the re-release, Martin Scorsese — who had previously paid homage to Kotcheff’s film by echoing the mortifying “two-up” gambling sequence from Wake in Fright during Sharon Stone’s spectacular introductory scene at the craps table in Casino — said that “Wake in Fright is a deeply — and I mean deeply — unsettling and disturbing movie. I saw it when it premiered at Cannes in 1971, and it left me speechless. Visually, dramatically, atmospherically and psychologically, it's beautifully calibrated and it gets under your skin one encounter at a time.” 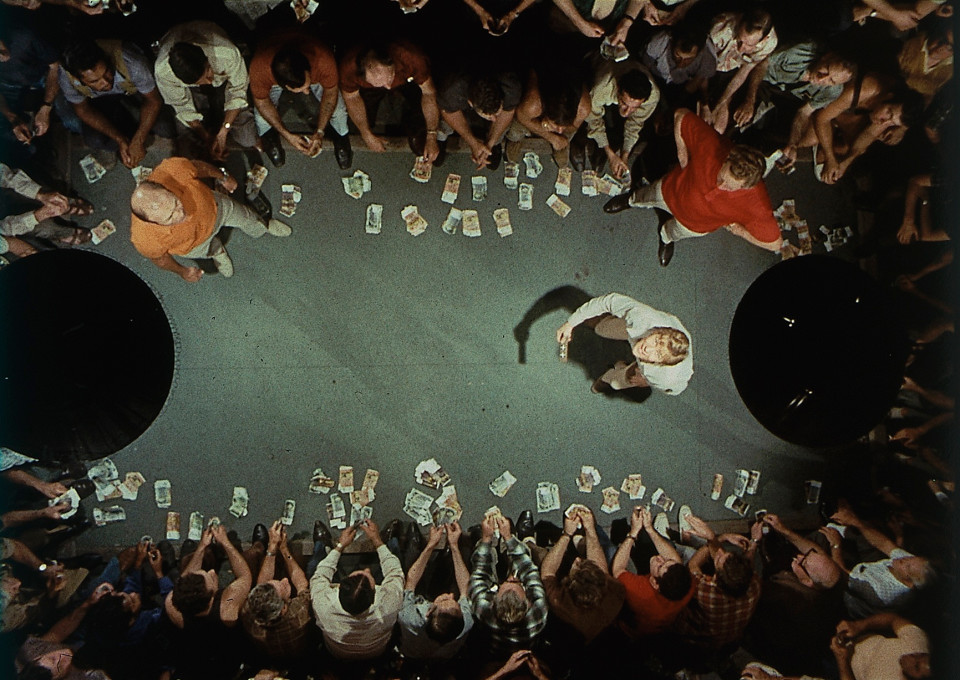 Though Kotcheff (nor anyone else) never made another film like Wake in Fright, it’s worth breaking chronology a bit here to jump forward to another item in the director’s filmography that displays a certain kinship with his earlier masterpiece: the underrated psychological drama Split Image, which was filmed before First Blood but released at the same time, in October 1982. Arriving a year after the celebrated Canadian feature Ticket to Heaven, Split Image shares the same story arc as that earlier film: a young middle-class man meets a girl who lures him into the clutches of a religious cult, from which he is subsequently kidnapped by his family and subjected to a harrowing reverse-brainwashing. These latter sequences in Split Image — featuring a mustachioed James Woods as the appropriately unlikeable cult deprogrammer — are reminiscent of Wake in Fright’s most despairing moments of psychological breakdown.

Kotcheff’s real breakthrough came shortly after *Wake in Fright *with the unexpected success of The Apprenticeship of Duddy Kravitz, a Canadian film with a predominantly American cast. Featuring a breakout performance by a pre-Jaws Richard Dreyfuss in the title role — as a Jewish kid from Montreal whose ruthless determination to make a success of himself comes at the cost of all those who love him — Duddy Kravitz won the Golden Bear at the Berlin Film Festival, earned an Oscar nomination for Richler and Lionel Chetwynd’s screenplay, and gave a new international credibility to English Canadian cinema (which was soon to be squandered as the industry entered its notorious “tax shelter” era). 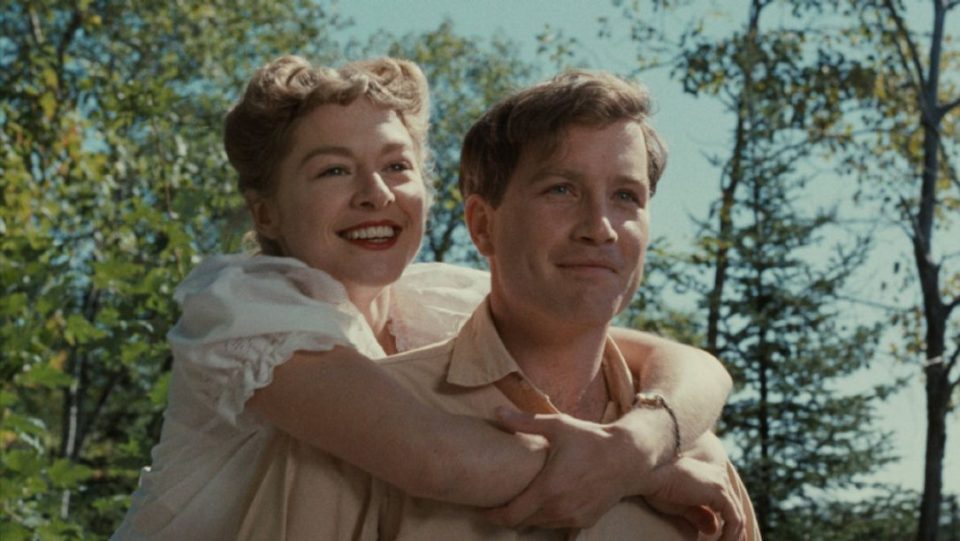 The Apprenticeship of Duddy Kravitz, 1974

The critical and commercial triumph of Duddy caught Hollywood’s attention, and Kotcheff soon got the call to take the helm on such studio pictures as the hit comedy Fun With Dick and Jane (starring George Segal and Jane Fonda, co-scripted by Richler) and the underperforming but critically lauded pro-football satire North Dallas Forty with Nick Nolte. But it was with a script that had been kicking around Hollywood for a solid decade that Kotcheff would make his biggest pop-culture mark — even though his name would rarely be associated with it.

First Blood had been in various stages of development since Columbia Pictures first snapped up the rights to David Morrell’s novel in 1972, while the Vietnam War was still raging; Kotcheff was in fact first offered the project (in an earlier script incarnation) in 1976, but passed on it at that point in favour of Dick and Jane. The project went through numerous hands through the rest of the decade, until upstart producers Mario Kassar and Andrew G. Vajna obtained the rights and convinced Kotcheff to direct, with Sylvester Stallone in the lead as fugitive Vietnam vet John Rambo — which was felt to be a risky choice at the time, as all of the actor’s non-Rocky films to that point had been box-office disappointments. Kotcheff, however, insisted that Stallone could pull off the emotional extremes required of the part, and Stallone agreed to star on condition that he be allowed to rewrite the screenplay in order to make Rambo (who kills numerous people in both Morrell’s book and the film’s original screenplay) more sympathetic.

It’s startling on returning to First Blood to realize how effectively low-key and doggedly sympathetic Stallone is in his first outing as Rambo: rather than the glistening beefcake shots that introduce the character in the sequels, our first glimpse of this future one-man army here is of an amiably shaggy hitchhiker simply walking down the side of a road in the grey and gloomy Pacific Northwest. Even after Rambo goes wild after being hassled and arrested by the local cops (including Brian Dennehy and an impossibly young David Caruso) and sets off an ever-escalating guerilla war with law enforcement in the “jungle” of the nearby woods, Kotcheff keeps the action gritty and small-scale, yet undeniably impactful. 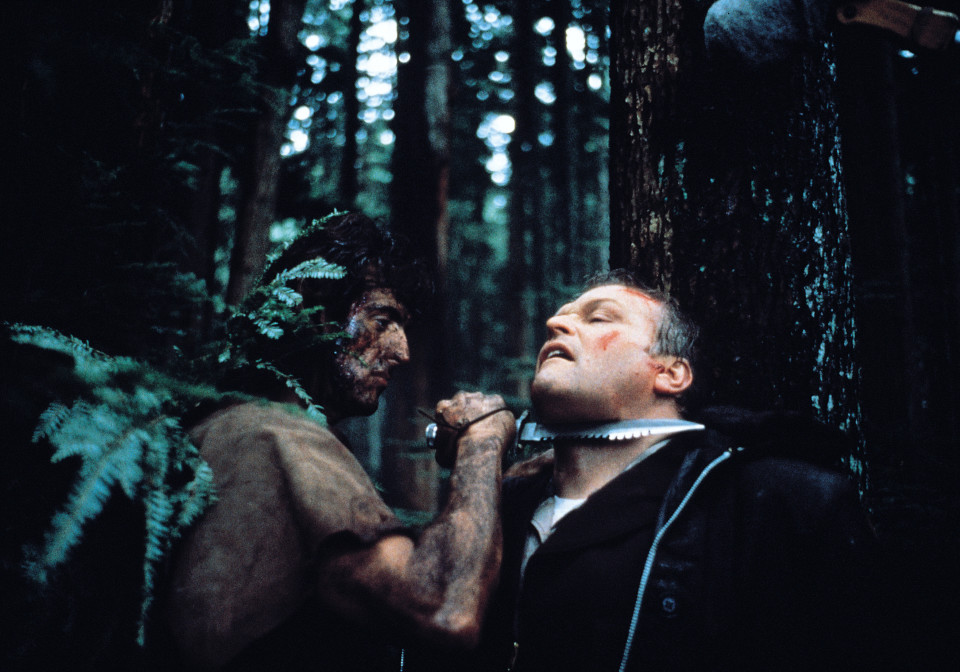 The most telling sign of the bombastic franchise to come is the performance of Richard Crenna as Rambo’s former CO Col. Trautman. The journeyman actor was a last-minute replacement for Kirk Douglas (who left the project shortly before shooting began over “creative differences” with Kotcheff), and this relative lack of preparation may explain the somewhat atonal, campy quality of Crenna’s performance, which is evident even in Trautman’s very first appearance in the film.

Despite his lack of involvement in the Stallone-steered sequels, Kotcheff was ultimately the person responsible for there ever being a Rambo series at all. First Blood originally ended with Rambo killing himself with Trautman's gun, but after shooting this downer conclusion Kotcheff’s commercial instincts kicked in; on the spot, he came up with a new final scene of Trautman escorting Rambo into custody, which the director blocked and shot in two hours. Surprisingly, the producers weren’t thrilled about Kotcheff’s on-set improvisation and went with the nihilistic original ending at a test screening; when it was met with an overwhelmingly hostile audience response, they opted for Kotcheff’s more optimistic variation, and were eventually rewarded when the film became an unanticipated smash hit.

Kotcheff claims that he was offered directing duties on the blockbuster sequel Rambo: First Blood Part II but turned it down, partly for moral reasons. For all the carnage in First Blood, there is only a single onscreen death in the film — one that is pointedly not caused by Rambo himself. Upon reading Stallone and James Cameron’s script for the sequel, Kotcheff balked at both the high body count (almost all of it Rambo-derived) and the jingoistic tone: “It seemed to be celebrating the Vietnam War, which I thought was one of the stupidest wars in history…. I couldn’t turn myself inside out like that and make that kind of picture,” he later said. It should be noted, however, that Kotcheff had already anticipated both the premise and the triumphal revisionist history of First Blood Part II with his successful 1983 actioner Uncommon Valor, in which retired colonel Gene Hackman leads a group of vets on a private mission into Laos to recover American POWs. (Fun fact: the film was improbably based on a story concept by ’80s cult-actor weirdo Wings Hauser, of such disreputable classics as Vice Squad — a film for which he also composed and performed a memorable song — and Deadly Force.)

In the ’90s Kotcheff returned to television, where he would spend 12 seasons executive-producing (and occasionally directing) the long-running Law & Order: Special Victims Unit before receiving a wave of late-career kudos as a result of the high-profile restorations of Wake in Fright and Duddy Kravitz. He also finally found the time to write his lively memoir Director’s Cut: My Life in Film, which our books columnist recently compared to Sidney Lumet’s classic Making Movies. While Kotcheff can never truly be endowed with the title of “auteur,” his accomplishments point to the limitations of the concept itself. How do we account for artists whose long and peripatetic careers prohibit an assertive “personal style,” but who have nevertheless produced works of undeniable influence and impact?