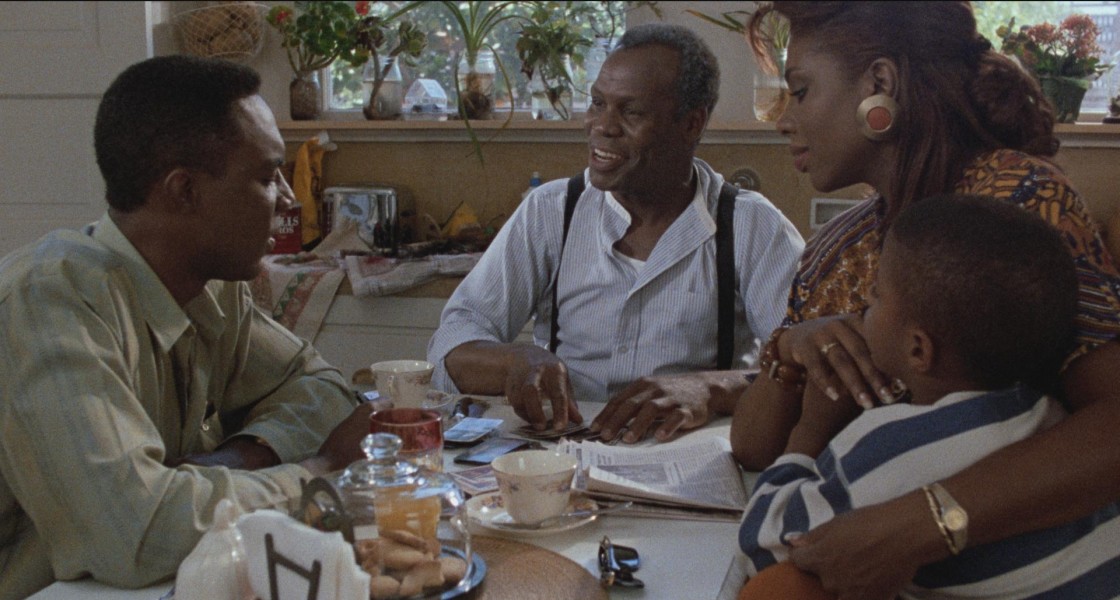 Fifteen minutes into Charles Burnett’s To Sleep with Anger, Danny Glover — whose mischievous, grinning face is at the centre of the film’s poster — finally appears onscreen as the film’s antagonist Harry Mention, who drops in at the lower-middle-class Los Angeles home of his old friends Suzie (Mary Alice) and Gideon (Paul Butler) while on his way to Oakland. Welcomed into the couple’s home with open arms, Harry greets his friends with raucous, vaguely disconcerting laughter — not quite the sinister laughter of a movie villain, but not a warm and comforting laughter either.

In fact, everything about Harry seems slightly exaggerated, a bit out of the ordinary: his overly polite manners, his low and raspy voice, his expressivity when a little boy touches his shoe with a broom. As marvellously played by Glover, Harry is ultimately too strange and grotesque to be real — and, despite its atmosphere of seemingly low-key realism, To Sleep with Anger ultimately reveals itself as no less heightened or poetic than Burnett’s masterful debut Killer of Sheep. Though a resident of L.A. since the age of three, Burnett (who was born in Vicksburg, Mississippi) is still attached to the Southern folklore and cultural heritage that travelled with his family (and others like them) when they relocated northwards, and the doubled life of his childhood — as an Angeleno and a Southerner — has fundamentally shaped his cinema. There is a child’s-eye quality to many of his films, which reveals itself both through their intensity of sensual and atmospheric detail — noises, places; bungalows with chickens in the yard, the sound of trumpets, the blues — and the way in which these real-life details are elevated into something almost magical. 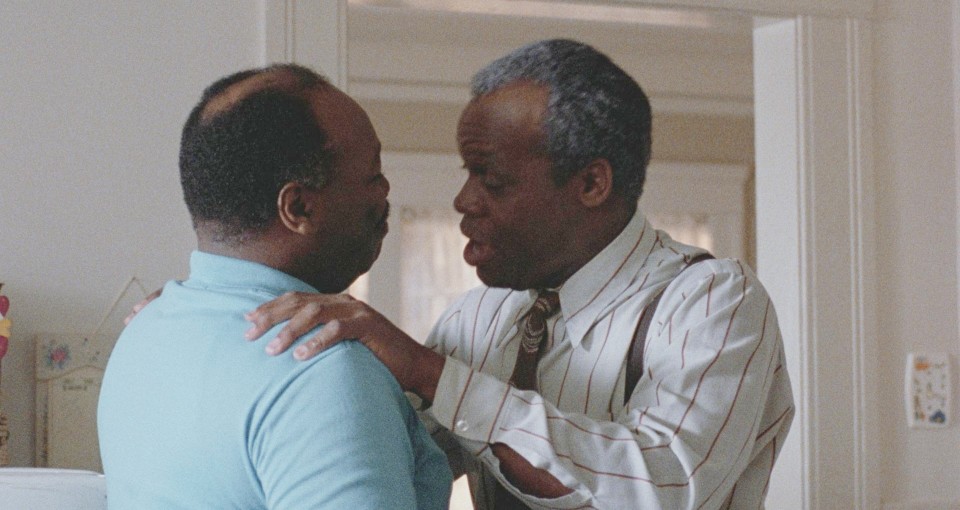 To Sleep with Anger

In this schema, Glover’s Harry is less flesh and blood than the embodiment of a Southern trickster archetype, a ghost from the past. For Suzie and Gideon, who like Burnett are Southern transplants, “the South” is not just a specific territory but a place in time — one associated with old ways and traditions that come to life once again in the person of Harry. “In those days you could always find something redeeming even in the very worst person,” says Suzie, and the way that Harry accordingly fluctuates from conviviality to malevolence speaks to the director’s ambivalent relationship with his native region — and as well to the remarkable talent of Glover, who is clearly enjoying the chameleonic nature of his character as he shifts from touching to malicious within the space of a single scene.

At the time of the film’s production, Glover (who, unlike his director, is a native Californian) surely had reason to enjoy the freedom that the role of Harry granted him; indeed, he was so dedicated to the project that he even helped Burnett secure funding to make the film. As Jared Sexton details in his essay “The Ruse of Engagement: Black Masculinity and the Cinema of Policing,” this period marked a movement towards “better representation” that saw Black male actors redefining Black masculinity onscreen by playing such roles as cops, lawyers, soldiers, football coaches and journalists. After years of cinematic emasculation by way of caricature and containment, Black men could now regularly see themselves on screen as something other than clowns, sharecroppers, or criminals — and for spectators and cultural critics in search of “respectable” representation, the Black-man-as-cop was at the very apex. 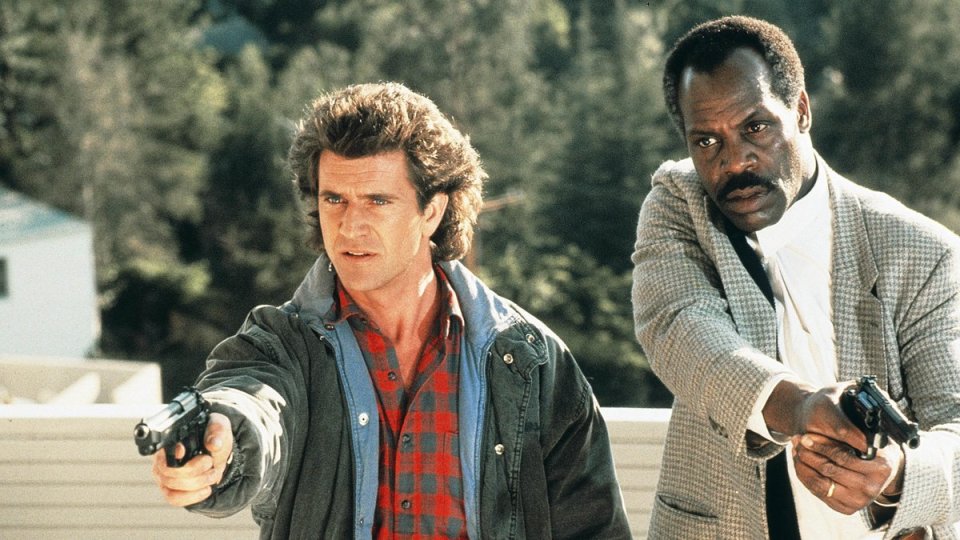 While Denzel Washington was the poster boy for this progressive movement as a whole, Glover was probably the most widely known representative of that above-mentioned role, after playing perpetually too-old-for-this-shit detective Roger Murtaugh in the buddy-cop blockbuster Lethal Weapon (1987) and its 1989 sequel. But Glover — an outspoken activist since the 1960s, when he was a leader in the massive 1968 student strike at San Francisco State University that led to the creation of the first department of Black Studies in the United States — was surely aware of the tenuous and compromised nature of Black actors playing such roles. In an interview about his ’60s activism, Glover offered a series of rhetorical questions that seem to have guided both his political activity and his work as an artist: “Who is allowed the privilege of participating? Whose stories? Whose voices? Whose vision? Whose interests?” And as Sexton notes, the campaign for “better representation” in the 1990s — what he calls “guises of Black empowerment” — was something that could be read as serving the interests of the (white) establishment: i.e., the spectacle of Black actors playing cops on screen reverses real existing power relationships offscreen, giving an illusion of structural change that is not actually occurring in the social realm.

Glover’s response to this situation was not to demand more “positive” depictions of Black characters on screen, but to seek to broaden the range of roles that Black actors were able to play. Where one can see in Denzel Washington’s career a desire to embody a Black masculinity that is respectable, even “noble” — as if the actor were on a mission to “salvage” Black masculinity on screen the way that Sidney Poitier had done in the 1950s and ’60s — Glover does not seem to place as much value on this kind of positive perception or reification of his masculinity. After the release of The Color Purple (1985), Steven Spielberg’s adaptation of Alice Walker’s Pulitzer Prize-winning novel, Glover — who plays “Mister,” the abusive husband of Whoopi Goldberg’s protagonist Celie — was obliged to respond to criticisms from such groups as the NAACP about what was perceived as the film’s negative portrayal of Black characters. Speaking to the New York Times, Glover eloquently defended Walker’s depiction of Black men, and gave much credence to the testimonials of the women around him (“I prefer to remember the reaction of older black women [who say] ‘That's the way it was.’”) 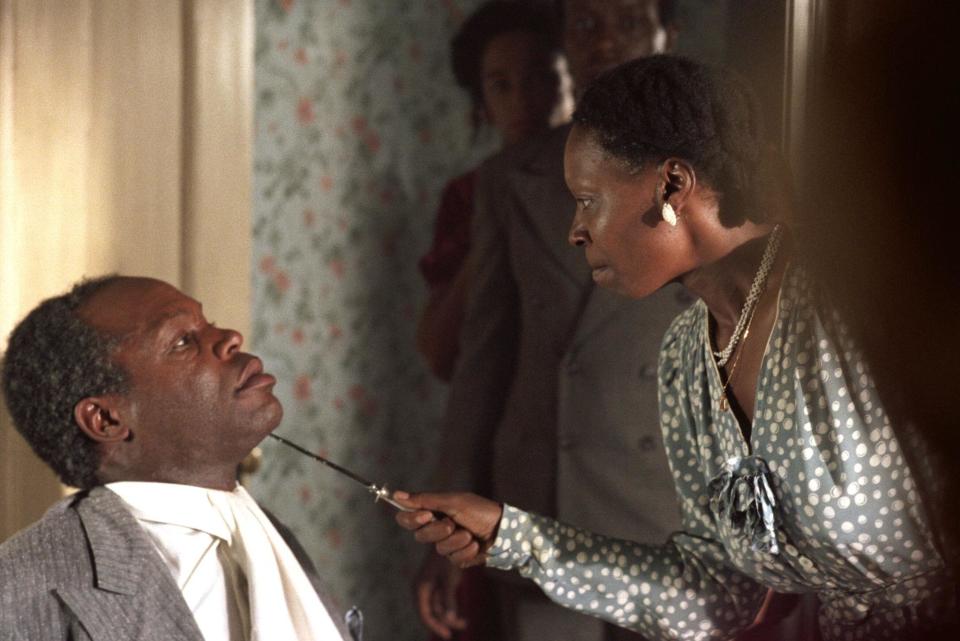 Glover and Whoopi Goldberg in The Color Purple

It is not common to see a Black actor letting his screen image be shaped by the imagination and politics of a female artist, especially a radical feminist artist such as Walker, whose womanist aesthetics could easily be seen as “anti-Black male.” (Glover’s admiration of Walker remained constant: in 2014, he spoke glowingly of her in a documentary dedicated to her life and work.) And the willingness to play a “regressive” figure like Harry Mention only corroborates the quietly untraditional path that Glover has quite intentionally forged for himself. While his film career has been uneven (his best work has most certainly been on stage), To Sleep with Anger not only reveals his remarkable versatility as an actor, but his belief that one-dimensional representations of Black experience — whether positive or negative — do an injustice to the full range of that experience. As his endorsement of Bernie Sanders during the last presidential campaign demonstrated yet again, Glover has never been afraid to risk unpopularity in the service of a greater good.

What Makes a Black Movie Star?