We pair meals with the Colombian visual artists's cinematic catalogue

Colombian-born activist, filmmaker and amateur rollerblader Jorge Lozano has created over 100 works since 2005, making him one of Toronto's most tireless visual artists. His work explores the politics of Canada and Colombia, the contemplation of life, the philosophy of being and the emotions we feel through visual poetry.

Lozano is constantly leaving indelible marks on Toronto: he co-founded the aluCine Toronto Latin Festival, and recently, his work expanded to the genre of multi-screen docu-installations. MOVING STILL_still life, a series of seven interviews presented in a simultaneous chorus, premiered at the Ryerson Image Centre in 2015.

"These tapes are an open-ended approach to create visual poetry with images," says Lozano as we talk at the TIFF Bell Lightbox, of what unites his seven shorts. "As a person it makes it possible for me to have my own vision of the world, to reaffirm my identity. I think freedom doesn’t exist, so you have to create it and invent it all the time. Art is a really great way to do that."

This Tuesday, June 2 at 6:30 pm, seven of Lozano’s short films will be screened at TIFF Bell Lightbox. Jorge Lozano: Tactical Visions is the first of three-part series here at TIFF, as part of our Free Screen programme.

With Lozano's help, we decided to pair four shorts with meals that allude to something in the stories. He’ll be hosting a screening at the Pleasure Dome on Saturday, June 24 titled Cooking with Jorge. This event will feature a free dinner cooked by the artist, followed by a screening of five of his films. 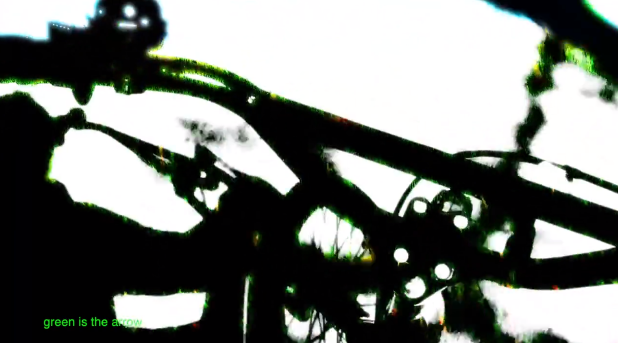 I have some of these edible flowers. My partner gave them to me. These are edible plants, they’re very colourful. The dish is like the piece: it’s green and has all these beautiful colours.

Lately, I’ve been having this desire just to eat greens. When I cook for myself, and I cook a lot, green is my thing right now. I’ve been planting this garden in my balcony. I have these plants that are growing very quickly. I feel that eating plants isn’t as questionable as eating animals. I feel that plants have a relationship with you, they communicate with you. But if I keep thinking this way, I’ll end up not eating anything soon.

TELL US ABOUT THE PIECE.

Tactical Cycle-Ordination makes reference to green. I was thinking about green with the arrows. There are arrows that take you on a bicycle trip. In this, I’m riding a bicycle and there’s a loop. As I ride the bicycle, the image becomes fragmented more and more. It loops about four times.

That video is a recreation of its trip, making a reference to greenery and nature and bicycles being ecologically-friendly. And a better way of transportation, more peaceful, more in contact with nature. That’s one of the things that I like about the bike. So it’s a homage to the bike as well. 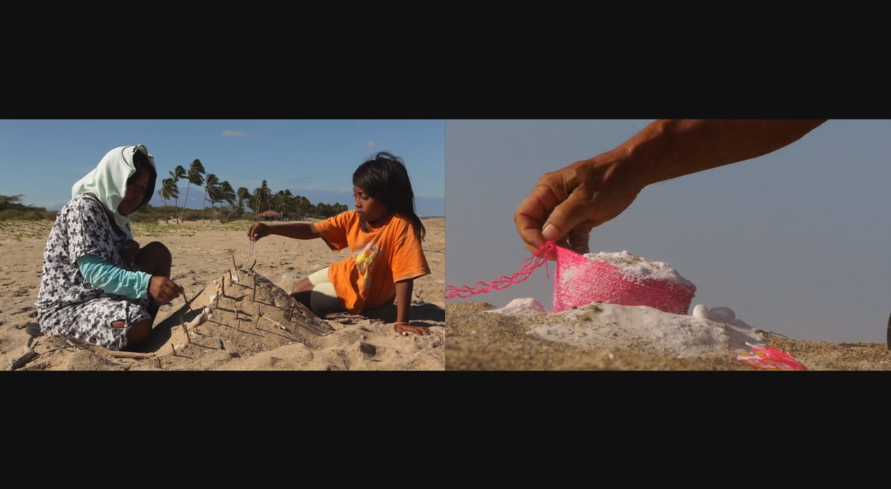 JORGE LOZANO’S MEAL PAIRING: Fried red snapper with a side of fried plantain and rice.

It's the one they eat the most on the Atlantic coast seen in the film: in Venezuela, Colombia and the Caribbean.

WHAT IS THIS FILM ABOUT?

This is a trip that we did to the north, called Guajira, located on the north coast shared by Venezuela and Colombia. That land is amazing. The guajiros live there. They’re quite interesting because they were never conquered by Spanish, for some reason. They’re also organizing clans. There’s lots of violence there, they have their own laws. Because of the civil war in Colombia that violence has increased.

It’s a land that’s amazing because it’s a desert. The sky is always blue. It’s always windy. The sunlight is always shining, and the clouds are always moving, so there’s always a constant panning effect on this beautiful landscape of yellow soil, almost dusty, very small trees and the blue ocean.

Instead of doing a documentary about that, we did an intervention. An intervention of using the threads, using the recording of the hands. We asked one of the women to lend us one of their dresses. Alexandra wore it and rolled down a mountain of sand. It’s very symbolic. It conveys a feeling of something that has happened. It’s one of those dilemmas of doing work that you don’t necessarily show, but instead gives you a feeling. It’s a more poetic approach. It’s not realistic. It’s not fiction either.

It’s to be thought of as a poem. Poetry is cryptic. You have to go into it to unravel it. 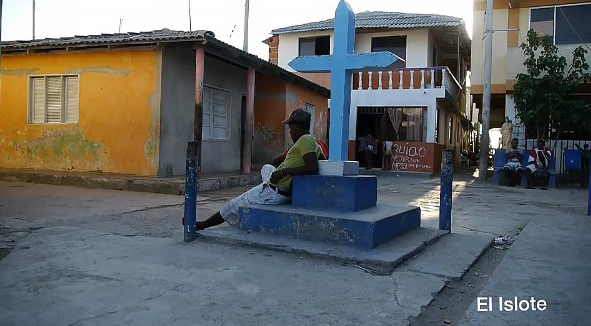 JORGE LOZANO’S MEAL PAIRING: A cocktail of shrimp with lots of fried plantains.

We went to have dinner in this woman’s seafood restaurant. The woman, named ‘E’ in the tape, became friends with us. Before we left that night, she said, “Come tomorrow. I want to tell you a story. Bring your cameras.” We came back for lunch and she told us a story about the town when it was controlled by the paramilitary for 10 years. It was total sociopolitical control.

It’s a black town and most of the people who came from the outside were white and mestizo. They ruled women’s bodies, homosexual men were forced to fight to death every weekend, girls as young as 11 were forced to participate in beauty pageants and the winners were taken by the soldiers into sex slavery. Women were punished a lot. This went on for 10 years. Two of her brothers were killed. She wanted to denounce the assassination of her two brothers by the paramilitary.

The thing about Colombia is that you go to these beautiful places, then you start talking to people and all these hidden violent, horrible histories start to emerge.

There are so many cases like hers. Like I said before, these beautiful people and lands saw so many horrible things happen. There has been a change in Colombia and that’s why people are deciding to talk. If it had been 10 years ago, nobody would have said anything because they would have been killed. In fact, we would have been killed as well because of our cameras.

TELL US ABOUT THE VISUAL APPROACH YOU TOOK FOR THIS PIECE.

It’s a more poetic approach without using images literally. It’s playing around with associations, giving more possibilities for interpretations. Most of the work that I do is not closed-ended like in fiction. There is no beginning, climax and end. They’re endless because they can be re-edited 20 times in different ways. They express something that I find very important, which is freedom and the capacity to do what you want to do. 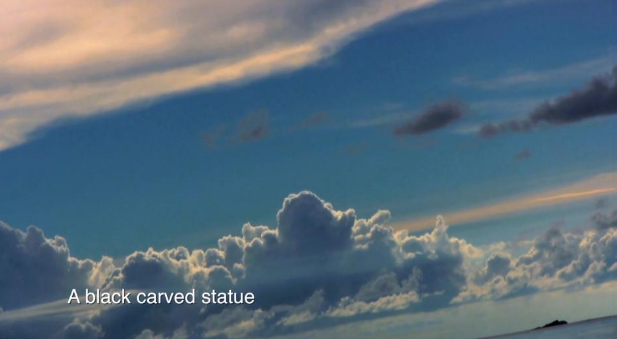 4. RESONANCE, MADE IN COLLABORATION WITH ALEXANDRA GELIS, 2010

That town (Portobelo, Panama) is hot too. At noon, you don’t want to go out. We were having trouble having food there. We had a lot of Panamanian beer because it was so hot.

HOW DID YOU END UP MAKING THIS FILM?

This is in Panama. A lot of these trips happened because of workshops that we do with youth in excluded and dangerous neighbourhoods. So in that trip, I was with Alexandra helping her with a workshop that she was doing with youth in gangs in Panama City. In those neighbourhoods, most people are armed. After the US invasion of Panama, a lot of weapons were left over after Noriega was defeated. They formed gangs. In every neighbourhood, there were four corners. Each corner was controlled by a different gang. Sometimes on Fridays and Saturdays, they would shoot each other when they drank. You could not cross the lines during those shootouts.

With Resonance, there’s a story there of the Black Christ, or [Christo Negro](https://en.wikipedia.org/wiki/Cristo_Negro_(Portobelo), that was found. Portobelo is the town where Black slaves would come to before departing for Cartagena. The population was sick and they found this statue floating and brought it to the town and the people got cured. Since then, they pay homage to this Black Christ.

HOW DID THE STYLE COME ABOUT?

One of the takes of Alexandra is of her on the boat, and it looks like it has effects, but it doesn’t. There are no effects in post-production, it’s all in camera. I united the story of the Black Christ with this footage of Alexandra.

There’s a Black Christ in Europe. I had been reading about it, then I went on the trip. It stayed with me then I decided to unite the material. Those waters were the waters in the story. My camera got damaged and that was the footage that was left.