Any Major Dude Will Tell You

Men get to do all kinds of cool stuff in movies: play beach volleyball with their shirts off, ride horses and motorbikes, shoot guns and crossbows (with one in each hand), party in Bangkok, pull off strings of elaborate heists, start secret fight clubs and grieve for recently deceased spouses before taking a chance on new love with women who look like Katherine Heigl.

Then there are the many genres of movies — action flicks, bro comedies, gay rom-coms, inspirational sports dramas about high-school football teams, anything starring Liam Neeson and wolves — that remain almost entirely all-male enclaves, aside from the occasional kidnap victim, coveted co-ed or quick-witted DUFF.

Yet whatever form a movie takes, there’s one thing their characters very rarely do: just be men in the company of other men. That’s one reason why the behaviour in Athina Rachel Tsangari’s film Chevalier, playing at the TIFF Bell Lightbox starting this Friday, June 3rd, is so fascinating. In the Greek director’s very astute new comedy — she’s called it a “buddy movie without the buddies” — six men vacation on a luxury fishing trip on a well-stocked yacht. Together, they find an unusual way to pass the time when they begin a competition to determine which of them is the “Best in General.” The terms and conditions of the battle are vague and ever-changing. The characters score each other in little black notebooks on contests ranging from their jet-skiing skills to the sincerity of their calls home to loved ones to — of course — the quality of their erections.

A film in which a group of men are stuck in the same place together may not seem so unusual. But it’s rare that guys in film hang out if it’s not to torture and murder each other Reservoir Dogs-style. Instead, the characters of Chevalier are there — and it pains me just to type these words — to have feelings.

Tsangari refuses to stack the deck by positioning any single one of the six as the clear alpha of the pack. There are three — the stately older man known as the Doctor (Yorgos Kendros), his handsome younger partner Christos (Sakis Rouvas) and the charismatic but self-satisfied real-estate man Yorgos (Panos Koronis)— who could plausibly vie for that position. The other men are in worse shape, namely Yorgos’ messier business partner Josef (Vangelis Mourikis), the Doctor’s high-strung insurance agent son-in-law Yannis (Yorgos Pirpassopoulos) and his meek, savant-like brother Dmitris (Makis Papadimitrou). No matter what, every man soon veers out of control.

Tsangari prefers to portray her men in isolation, a more comfortable state given the size of their cabins. By the time their game is fully underway, they are inevitably clustered in tight groups of two or three. At one point, five comically wedge themselves into the doorway of a cabin like the Marx Brothers when Christos wants to see who responds to his false cries for help the fastest.

Forced into close proximity with each other — the voyage home is suspended because of the boat trip, lending the not-so-pleasurable cruise an air of the interminable dinner party in Luis Buñuel’s The Exterminating Angel — these men essentially rub each other raw. But it’s no wonder that their nerves seem shot when even the most mundane and inconsequential exchanges — like Yorgos telling Christos about how he prepares a pear, prosciutto and arugula salad — become the means by which they test and assess each other’s masculinity.

Ironically, cinematic studies of interpersonal dynamics are hardly so rare when the characters are female. From the Hollywood “women’s pictures” of George Cukor, King Vidor and Douglas Sirk through to ‘80s weepies like Steel Magnolias and Beaches to the post-Bridesmaids cycle of lady-centric comedies like How To Be Single, there’s a far more established tradition of movies that scrutinize women’s relationships with other women. Stories of men tend to involve external goals, challenges and conflicts. This is possibly for good reason, judging by what transpires in Chevalier. Shorn of a sufficiently galvanizing objective and left to their own devices, these men are consumed by their anxieties, insecurities and childish rivalries. 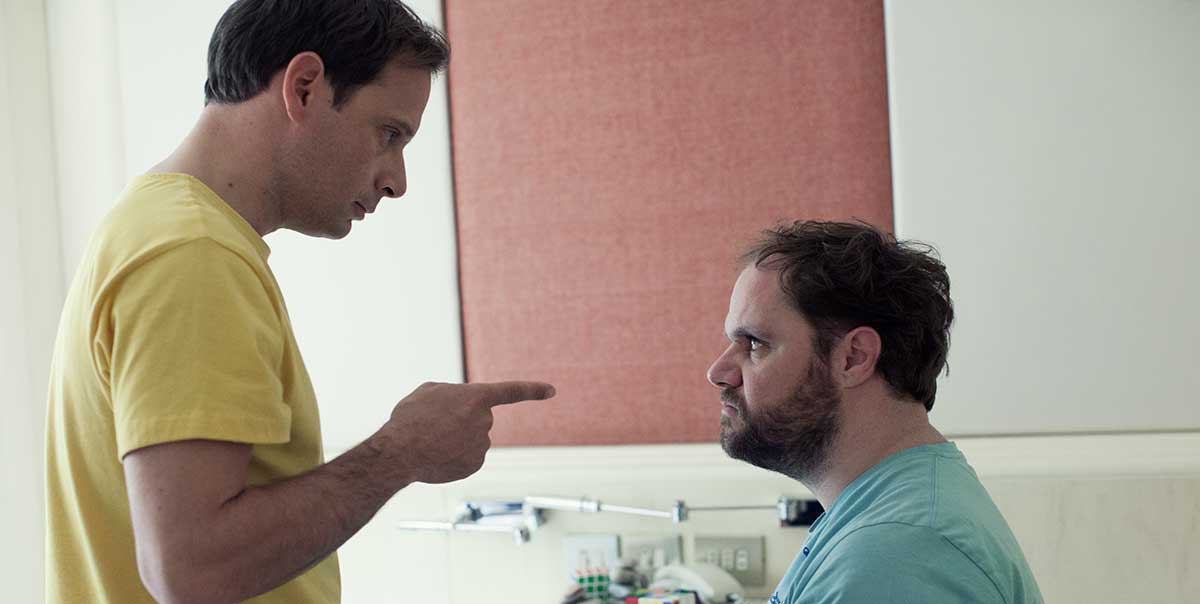 Tsangari watches her male characters with her own little black notebook in hand, noting the sharp fluctuations in their respective machismo levels to determine their keenest vulnerabilities. But she’s not the first filmmaker to have such a discerning eye on males bred in captivity. Chevalier fits into a rich lineage of such works directed by filmmakers of both genders.

Cited by Tsangari as an inspiration, John Cassavetes’ 1970 film Husbands is an excoriating portrait of three suburban buddies The trio — played by Cassavetes and his co-stars/real-life pals Peter Falk and Ben Gazarra — go into emotional freefall in the wake of their friend’s fatal heart attack. They spend the film hurtling from one bad idea to another, pausing only to lay into each other for the weaknesses they can’t perceive in themselves. Oddly enough, that makes for a pretty good time, especially when the fellas head on a whim for London, where they carouse in a casino and somehow browbeat a trio of women into joining them for a hotel-suite party. Like Chevalier, there’s no clear alpha in the pack, with Gazarra and Cassavetes’ characters both gunning hard for top spot. (Poor Peter Falk gets the worst of it, as usual.) As the night unravels, some viewers may squirm to see the bonds between men portrayed as a volatile cocktail of need, hurt, love and cruel competitiveness.

Six years later, Elaine May would up the ante by re-teaming Cassavetes and Falk for her 1976 film Mikey and Nicky. It’s a ruthless story of a male friendship gone toxic and then terminal, at least for the unluckier of the two. Cassavetes and Falk play two small-time hoods coping with the consequences after one rips off their boss. As fascinating as May’s film may be as a travelogue of New York City before it looked like one large H&M, it’s most remarkable for the innumerable ways that Mikey and Nicky smash into each other (figuratively and literally) as they carouse and fight their way through their last night together. May’s indulgence of her actor’s penchant for improvisational riffs became the stuff of legend. Reportedly, Mikey and Nicky ended up using three times as much film as Gone With the Wind.

Mike Nichols’ 1971 film Carnal Knowledge (created in tandem with screenwriter Jules Feiffer) fits nicely into the filmmaker’s long lineage of movies chronicling the hostilities between men and women. (They run all the way from Who’s Afraid of Virginia Woolf? in 1966 to Closer in 2004.) But the warfare between the two male characters played by Jack Nicholson and Art Garfunkel seems like the director’s keenest area of interest.

As the two exchange what they believe to be Wildean witticisms (when at college) and pearls of hard-won wisdom (as their middle-aged selves), the film challenges viewers with the question of which man is the most vile: is it Nicholson’s overtly misogynistic, womanizing blowhard or Garfunkel’s seemingly gentler but terminally solipsistic ball of passive-aggressiveness? The one thing this devastating dramedy knows for sure that these two misanthropes deserve each other far more than Ann Margret. Ultimately, it’s probably Nicholson’s Jonathan who proves to be the worst. That’s largely because the only means by which he can still get it up is to hire a sex worker played by Rita Moreno to deliver a carefully composed spiel about how he is the kind of “man who inspires worship because he has no need for any woman.”

The previously mentioned films set a very high (or low!) standard of cad, one that many filmmakers have tried to match in the decades since. The films and plays of David Mamet and Neil LaBute are chockful of characters who demonstrate the ugliest aspects of male competitiveness and viciousness. (See In The Company Of Men, The Shape Of Things, Sexual Perversity In Chicago, Glengarry Glen Ross.) Recently, Ruben Östlund’s 2014 movie Force Majeure established a new extreme of lousiness. The film has surgical precision in its dissection of its central male protagonist, a man who can’t own up to his inability to protect his family from an apparent calamity. 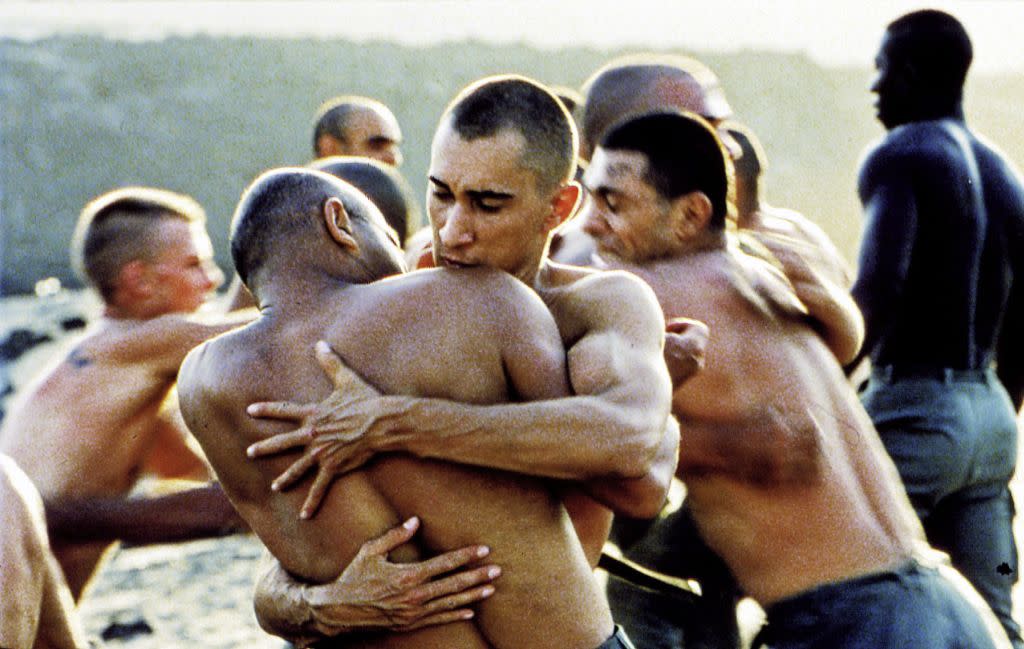 Perhaps male directors love to castigate and heap abuse on their own surrogate selves. Maybe that’s why works by female directors often encourage us to respond to these strange hairy creatures called men with feelings other than straight-up contempt. Emphasizing the latent homoeroticism that is a regular component of cinema’s otherwise hetero-leaning sausage parties, filmmaker Claire Denis detects a gentler aspect in the dynamics between her French legionnaires in 1999’s Beau Travail. Like Billy Budd — the proto-queer Herman Melville novella that inspired it — Denis’ study of men is driven by the seemingly nobler feelings of admiration inspired by Gregoire Colin’s hunky Budd stand-in. Denis films French Legionnaires as they wrestle shirtless in the desert sun and writhe to Corona’s Eurohouse classic “Rhythm of the Night.” (Chevalier’s stunning use of Minnie Riperton’s “Loving You” proves that Tsangari is no slouch in the soundtrack department either.)

At the same time, these same feelings of adulation cause no end of torment for Denis Lavant as the lovelorn master sergeant Galoup. His envy of such evident perfection fuels Fight Club’s same compulsion to destroy the face of Jared Leto.

Empathy informs the complex varieties of bro-on-bro interplay in Kelly Reichardt’s 2006 film Old Joy and Lynn Shelton’s 2009 work Humpday. Reichardt’s achingly lovely story of two forlorn Portlandians on a hiking trip is far less raucous than Shelton’s comedy about straight friends who goad each other into a night of gay sex. Yet, as both sets of dudes get more physical with each other — the Old Joy pair at a bucolic hot springs, Humpday’s duo stay the night in a motel room they’ve set up to document the event as a misguided stab at performance art — the films highlight the struggle of how men express what they really feel about each other.

Confusion and a palpable note of empathy abounds in Chevalier. Nowhere is the latter clearer than the scene in which Josef — the one who’s had the most trouble competing in the erection contest — finally has something to show for his efforts. Rather than serve up this man as a target of easy contempt or mockery, Tsangari presents his would-be moment of triumph as heartbreakingly pitiful, wickedly hilarious and oddly heroic, all at once. “Come on, I don’t have all night,” Josef calls to his competitors, so that they can get an eyeful before it’s too late. And much to their credit, the others on the yacht treat him with a surprising gentleness, ushering their clearly unhinged exhibitionist friend back to bed. They understand that he’s in a bad way and respond with kindness.

As caustic as Chevalier can sometimes be when skewering its characters’ pretensions and self-delusions about their mastery and manhood, Tsangari largely prefers to go easy on her characters when they’re at their most fragile. Clearly these guys have enough problems already.