“The Most Naked Fix” 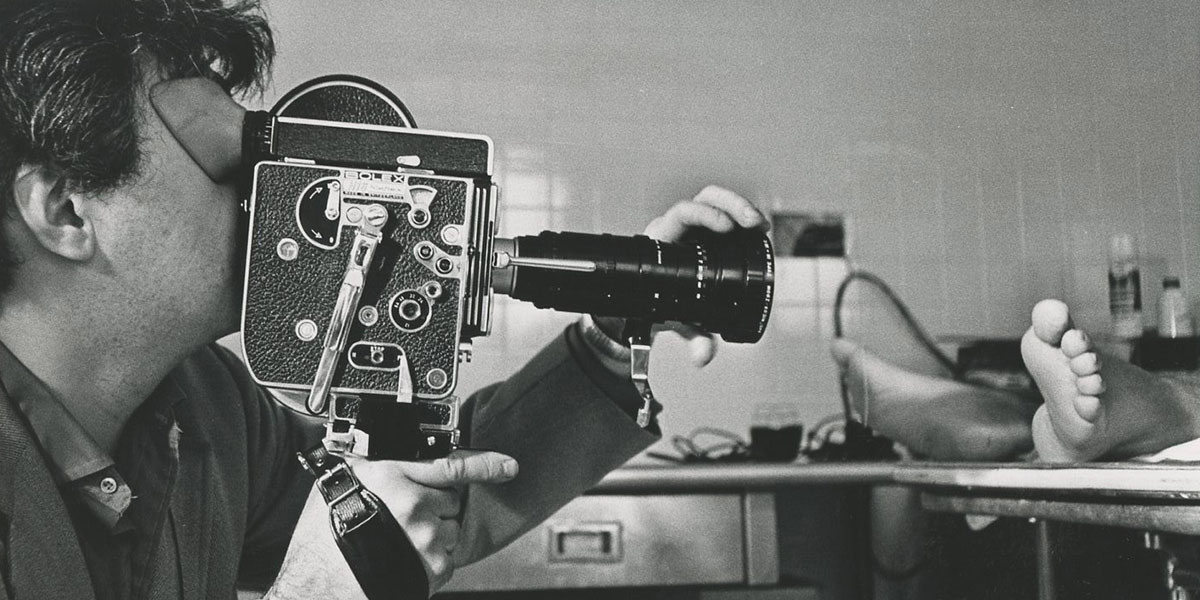 The Pittsburgh Trilogy screens on Tuesday, May 15 as part of the year-long series Existence is Song: A Stan Brakhage Retrospective.

Parsing the web-like body of work Stan Brakhage produced over the course of 50-odd years for clues to his artistic intentions can be a challenge, perhaps especially when trying to divine those aims through the artist’s own words. A theorist as much as a poet and an alchemist, Brakhage reinvented and contorted the meanings of words and phrases in his texts and declarations to best serve his needs at any given time. So while he could, at one point, reportedly declare himself to be “the most documentary of filmmakers,” at other times he would balk at the term, most notably when speaking of what would seem to be his most “documentary-like” work, the three medium-length films — eyes, Deus Ex, and The Act of Seeing with One’s Own Eyes — that have come to be known as the Pittsburgh Trilogy.

Brakhage shot all three projects in 1971 after receiving an invitation to visit Pittsburgh from Sally Dixon, then curator of the Carnegie Museum of Art’s Film and Video Department. Having recently completed Scenes from Under Childhood (1967-70) and Sexual Meditations (1970-72), two intensely personal suites focused on his own family, Brakhage took a far different tack with the Pittsburgh films, devoting each to a different local institution: the city police force in eyes, a hospital in Deus Ex, and a morgue in The Act of Seeing with One’s Own Eyes. However, Brakhage eschewed the “documentary” label for these works, opting instead for the term “document,” which, he explained, “is something quite distinct and different from documentary, and something quite distinct and different from home movies. I was not there to get a movie of my experience[;] I was there to get the most naked fix I could manage on what was transpiring.”

Despite this disavowal of any personal dimension, it often seems as if these works are indeed records of Brakhage’s own experience rather than the “naked fix” he claimed. The filmmaker himself alluded to the personal basis of the films when he described their topics — authority (eyes), illness (Deus Ex), and death (The Act of Seeing) — as “bogeymen” he hoped to better understand, if not conquer. Furthermore, in the frequently abstract nature of the images and their assembly, the films further Brakhage’s long-standing explorations of looking and sight, explorations that were rooted in the artist’s conception of the self. In his writings on the nature of human (and camera) vision, Brakhage offers an intricate intertwining of automatism and subjectivity — between the passive reception of experience (of eyes, he said “I began filming in a very direct way, which is to say, the opposite of directed”) and the imaginative interpretation or construction of it. He derives particularly resonant rhetorical effects from the phonetic play of “eye” and “I”: in the title essay of his book Metaphors on Vision, he writes that “somewhere, we have an eye (I’ll speak for myself) capable of any imagining (the only reality).” 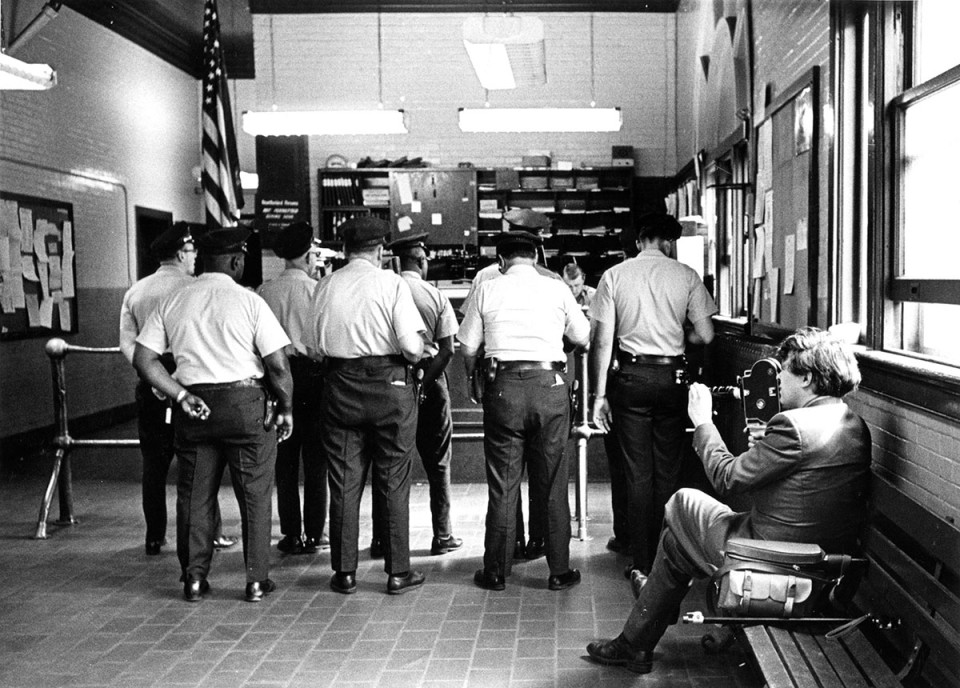 Ironically, Brakhage here somewhat echoes the overstated but still relevant claim by John Grierson — the grey eminence of documentary filmmaking at the National Film Board of Canada — that documentary constitutes “the creative treatment of reality.” In this context, what makes the Pittsburgh Trilogy particularly fascinating is how its documentary basis brings Brakhage’s complicated thoughts about the relationship between reality and imagination into dialogue (or collision) with other, more traditional conceptions of truth. The very making of eyes attests to this fusion: Brakhage was only able to secure his ride-along with the cops — which he had in fact been attempting to do for several years — through the credentials of a Pittsburgh journalist, which afforded him access that would have been denied to him as an artist. Thus even though the finished film evinces an interest in a very different kind of truth, its production — its very existence — was premised upon an institutional belief in the social value of journalism, and its concomitant grounding in more conventional definitions of education and truth.

It’s thus useful to compare the first two Pittsburgh films, eyes and Deus Ex, with Frederick Wiseman’s virtually contemporaneous Law and Order (1969) and Hospital (1970), which also take the police force and the clinic as their subjects. While both Wiseman and Brakhage depart from staid, expository modes that had dominated documentary since the 1930s, they approach their material in richly different ways. 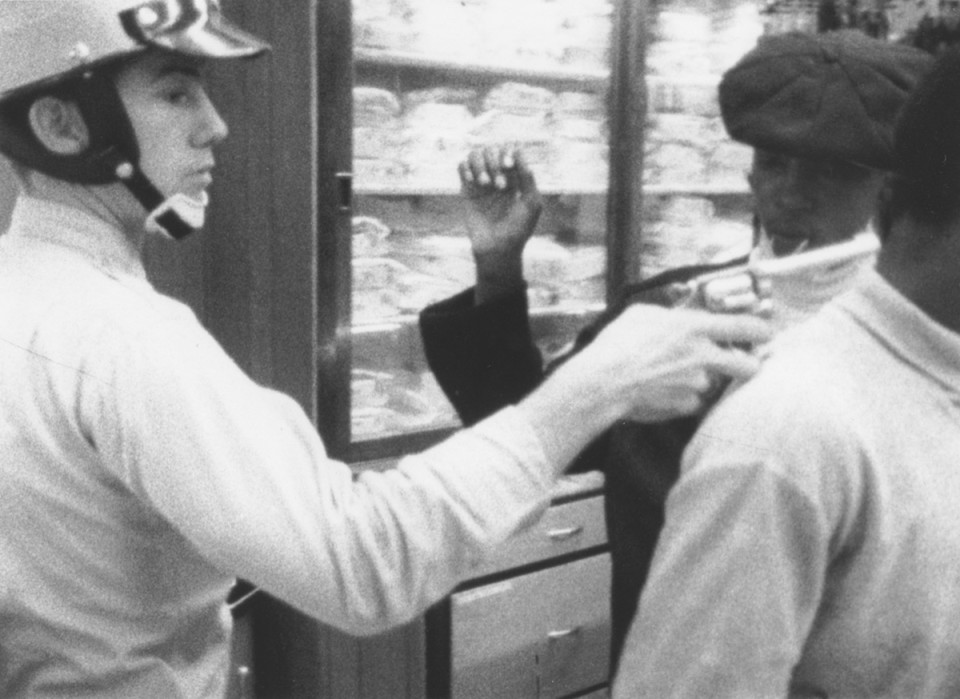 Although both filmmakers eschew voiceover (that traditional signifier of documentary status and significance), the Wiseman films — descended as they are from the direct-cinema model of the late ’50s and early ’60s — not only include but are driven by the faithfully reproduced voices of their subjects, with many extended dialogue sequences; the Brakhage films, conversely, are completely silent, in keeping with the bulk of the artist’s filmography. Visually, Wiseman subtly varies his approach throughout, sometimes bringing his camera in close proximity to his subjects, at other times maintaining a distance that allows multiple individuals to share the frame. Brakhage, meanwhile, ties his camerawork directly to the physical fact of his body — e.g., the occasional leaps and tremors of the frame caused by the filmmaker’s own heartbeat — and an extension of his vision, through the use of a sensitive telephoto lens.

The subjective is thus an intrinsic part of the trilogy from the very beginning, and Brakhage further emphasized this point when he invoked the idea of performance in discussing eyes: of the police officers in the film, he noted that “they’re all actors, like we all are. And they are acting their particular role, which is a rather formidable one.” While the film includes fleeting footage of the squad around the station, captured and presented with Brakhage’s typical vitesse, the bulk of eyes takes place in the backseat of a patrol car, as the filmmaker documents the cops’ daily rounds and interactions with the public. Shooting from a distance with that aforementioned jerky lens, Brakhage endows the unheard dialogues between cops and citizens with a voyeuristic and (perhaps appropriately) unnerving quality. Inevitably, it’s not long before there is a call regarding a dead body, and Brakhage renders the lifeless, blanketed form as a near-abstract shape — the first instance of that concern with mortality that will assume greater prominence in Deus Ex and, most notably, in The Act of Seeing with One’s Own Eyes, where abstraction gives way to the gruellingly concrete.

Shot over ten days at Pittsburgh’s West Penn Hospital, Deus Ex borrows its title from Charles Olson’s 1964 poem “Cole’s Island,” in which the narrator describes an encounter with death, localized, tellingly, around the eyes (“We did exchange some glance. That is the fullest possible account I can give, of the encounter”). Unlike the mostly bright exteriors that dominate eyes, Deus Ex is dark, shadowy, and eerie, particularly in the Lynchian shots of long, empty corridors. Glimpses of bodies are visible from under drapes and behind curtains, or are seen in fragments as the hands of surgeons slice and stitch. Doubtlessly, the aura of menace that permeates the film is increased by an awareness of the following film in the trilogy: while some of the patients we see surely returned home healthy, for all we know many others became clients for the institution that Brakhage explores in The Act of Seeing with One’s Own Eyes.

The Act of Seeing with One's Own Eyes

Brakhage’s career-long concerns with self, sight, and knowledge dovetail most succinctly in this final and most famous installment of the Pittsburgh Trilogy, which takes its title from the translation of the Greek word “autopsis,” the root of the English term “autopsy.” Opening with tightly framed shots of pallid corpses (again invoking his concern with surfaces), Brakhage proceeds through the unexpected tenderness of the pathologists’ initial examinations — hands gently manipulating flesh and limbs in search of signs of trauma — to graphic footage of the bodies’ clinical dissection. Blood seeps, organs spill, and flesh jiggles as the hands and increasingly complex instruments do their work — and as the film inexorably proceeds through its sometimes unbearable 35 minutes, these most naked and uncontested of documentary proofs begin to offer access to realms of experience far beyond the documentary.

“Art must have a mystery to it, and this is too scientific to be art,” said Andrei Tarkovsky of Brakhage’s childbirth film Window Water Baby Moving when the two artists met at the Telluride Film Festival in the early ’80s — but no less than that previous “scientific” film, which concludes with the image of Brakhage’s rapturous face as he witnesses his new child emerging into the world, The Act of Seeing is a record of a profoundly personal experience of looking. “I really overshot because I was so desperate to always keep the camera going,” Brakhage recalled of the film’s production. “Every moment I stopped photographing I really felt like I might faint or burst into tears, or come apart, or something like that.” In this fragmentary but unblinking spectacle of bodily dismemberment, Brakhage taps into some of the same deep, existential dread as that elicited by another (non-documentary, non-experimental) genre: while the dead in Brakhage’s films very much are and remain deceased, one is reminded of the low-budget gore and existential dread of Pittsburgh native George A. Romero’s Night of the Living Dead (1968). In the Pittsburgh Trilogy, bodies, what they wear, and what they contain can all offer access to certain truths, but perhaps none more intimate and profound than our fears, which are always waiting to be unearthed.

“An Eye Unruled by Manmade Laws”