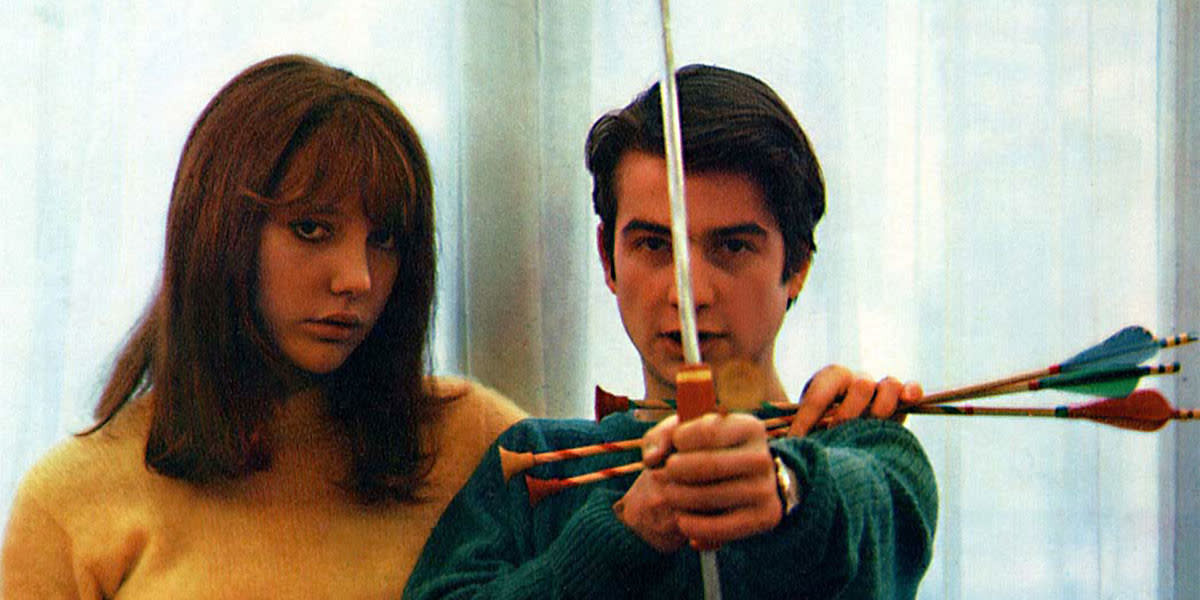 When TIFF Cinematheque presented a complete, two-part Godard retrospective in 2014, our first thought for launching the second, more daunting half of the series was to invite Anne Wiazemsky — Godard’s former wife, occasional muse, and (later) acute chronicler of the period encompassing the making of La Chinoise and the director’s thorny Dziga Vertov Group films — to program a sidebar of films by other directors in which she had starred (a list that includes Bresson, Pasolini, and Garrel). The actress gracefully declined the invitation, perhaps because — as her memoir of her relationship with Godard Un an après and the recent film based on the book, Michel Hazanavicius’ Le Redoubtable, testify — after JLG’s courtship of Wiazemsky when she was still a teenager, her decade-long marriage to the director slowly became a “daily malaise.” 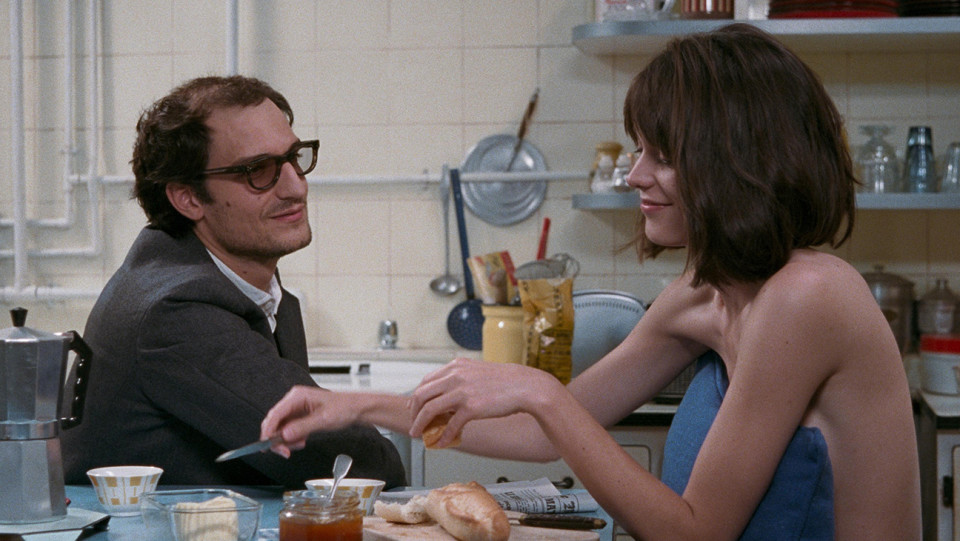 Wiazemsky greatly approved of Le Redoubtable’s (and star Louis Garrel’s) portrayal of Godard, claiming that it succeeds “in making this odious figure making grotesque speeches moving and funny.” The film depicts the director as morbidly possessive and controlling, culminating in a suicide attempt when he feels Wiazemsky slipping away from him. The actress described Godard as rigidly intolerant and self-loathing during this period, but declared that she nevertheless continued to love La Chinoise, the film that initially brought the two together, characterizing this prescient work (it fairly predicts the events of May ’68) more as a comedy than as a polemic. “Not only was it a prophetic film, but it’s also like a Marivaux comedy,” Wiazemsky declared. “And it’s a marvellous film which deserves to be viewed again. The grace of youth permeates throughout the film. They’re very young people, transitioning from children to adults. They’re almost exactly like Les Enfants Terribles.”

This past summer, I spent considerable time researching the biographical details of Wiazemsky’s relationship with Godard while preparing a commentary to accompany a Blu-ray release of La Chinoise; what follows below is a brief, modified excerpt from that commentary (which came to over 13,000 words, and is still woefully inadequate to probe this coruscating, endlessly perplexing work). Sadly, the Blu-ray release coincided with Wiazemsky’s premature death from cancer, aged 70. Our screening of the film at TIFF on December 5 therefore becomes a posthumous homage to the actress turned author, the muse become her own creator. 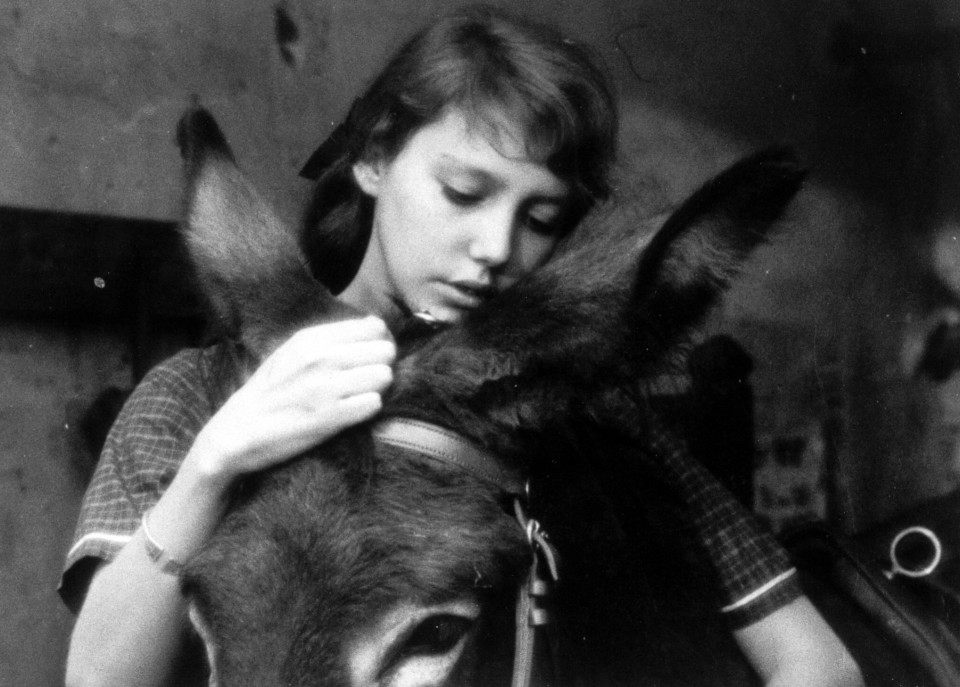 Just as Godard’s early cinema had beatified his then-wife Anna Karina, La Chinoise glories in the image of his wife-to-be, Anne Wiazemsky — the second of Godard’s three wives, who all bore the same first name. (In La Chinoise, Wiazemsky plays a character called Véronique, also a favourite name for the director.) Godard met Wiazemsky briefly on the set of her first film, Bresson’s Au hasard Balthazar, and fell in love with her image in it. She had resisted seeing Godard’s films, but after Balthazar finished shooting she went to see Pierrot le fou and Masculin féminin, and — like Ingrid Bergman’s passionate communiqué to Roberto Rossellini after seeing his Rome, Open City and Paisan — she composed a love letter to Godard which she sent to the offices of Cahiers du Cinéma, saying that she loved the films and therefore the man who made them. Godard sought Wiazemsky out, picking peaches in Avignon. They would return to premiere La Chinoise at the Avignon theatre festival, where it was met by an uncomprehending and largely hostile reception. Godard gave Wiazemsky what he called a precious gift: a French grammar book printed at a Catholic mission in 1900 and used for decades by the Chinese, dedicated it thus: “For the only Chinese woman I love, in memory of the future.” 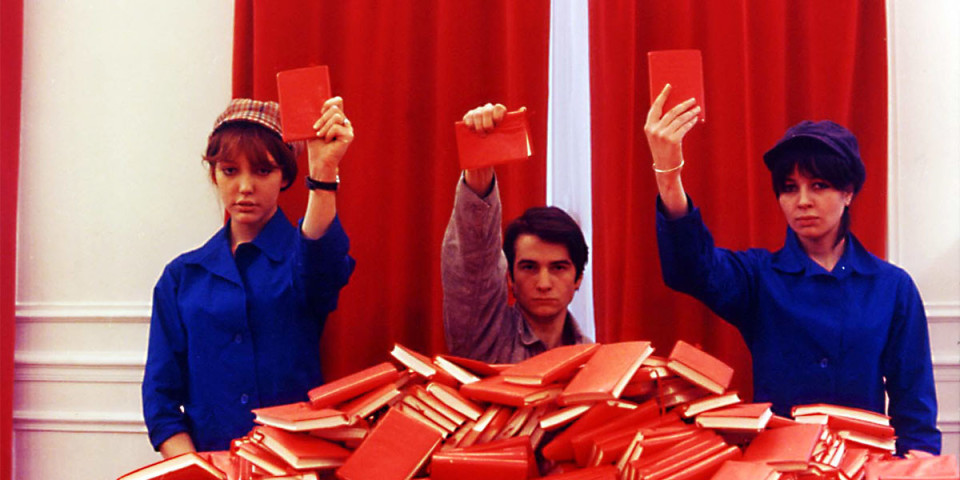 Godard was 37, Wiazemsky 19 and still a minor, and her mother was bitterly opposed to the relationship, forbidding the couple to stay out past midnight. (“It’s complicated to love a minor!” Godard joked.) Wiazemsky’s 80-year-old grandfather, the conservative, devoutly Catholic novelist François Mauriac, had to consent to the marriage because her father was dead. Godard dressed in a grey suit to make the proposal to Mauriac, the man who would soon come to represent so much of what the director despised, including an allegiance to Gaullism (the filmmaker once called De Gaulle a “shit pump,” and declared that any supporter of his should be shot).

Godard had said of his split with Karina, “She left me because of my many faults; I left her because I couldn’t talk movies with her.” He intended not to let that happen with Wiazemsky, whose cinematic education he promptly undertook. While studying at Nanterre, she attended one or two films every night with Godard, a practice they maintained as much as possible during the shooting of La Chinoise. Many of the films they attended were at the Cinémathèque française, whose legendary founder Henri Langlois would be dismissed from his position the year after by the very culture minister whom Véronique denounces in La Chinoise (for his banning of Jacques Rivette’s film La Religieuse).

The dismissal triggered major demonstrations which Godard and Wiazemsky participated in, and which were later seen as the forerunner of the upheavals of May 1968. When the May uprisings began, Wiazemsky and Godard one evening ran into Jean-Pierre Léaud and Chris Marker near Luxembourg; a group of students asked the four to help them rip up the street to supply them with weapons against the police, and ended up ejecting Léaud from the chain because he wiped his hands with a handkerchief after digging up each paving stone. 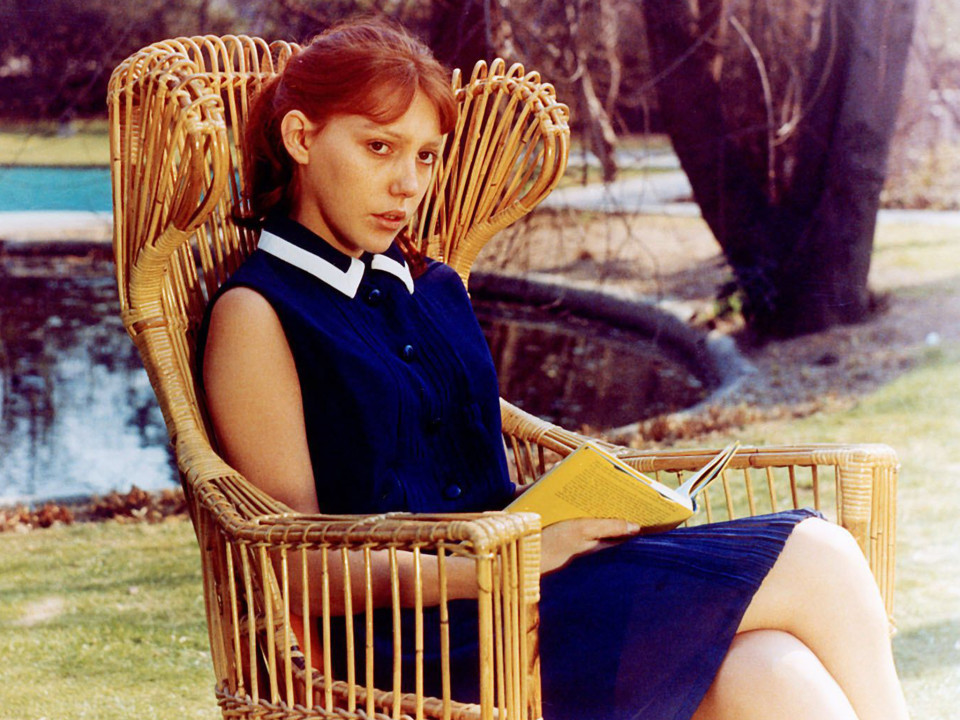 Initially, Godard had not wanted Wiazemsky to act again after Au hasard Balthazar, perhaps in reverent observance of Bresson’s admonition that he did not want any of his actors to appear in subsequent films. However, not only did Godard decide she was ideal for La Chinoise, but also — when the film competed at the Venice Film Festival and Wiazemsky ran into Pier Paolo Pasolini, who asked her to star in his next film Teorema — he immediately gave his approval.

To show just how much Maoism was in the European air at the time, at Venice that year La Chinoise was also competing against Marco Bellocchio’s China is Near (both ultimately lost to Buñuel’s Belle de Jour). Godard passionately admired Bellocchio at the time, and the Italian director’s film strangely connects with La Chinoise towards its end, when a teenaged seminary student turned Maoist scrawls “China is Near” (La Cina è vicina, a fittingly Godardian bit of wordplay) on the walls of the Italian Socialist Party’s headquarters.

Godard was also an admirer of Bertolucci (whose early films were heavily indebted to those of JLG), and that admiration was later repaid: in Bertolucci’s 2003 The Dreamers, about three young cinephilic idealists involved in the protests of May ’68, a poster of La Chinoise is prominently displayed on the trio’s bedroom wall. (Speaking of bedrooms, Wiazemsky once noted that, after making love, Godard sometimes sang “The Internationale” — which perhaps explains that comic episode in La Chinoise in which the suicidal Kirilov traipses across the bed where Yvonne and Henri are asleep, with the radio blaring that same socialist anthem.) 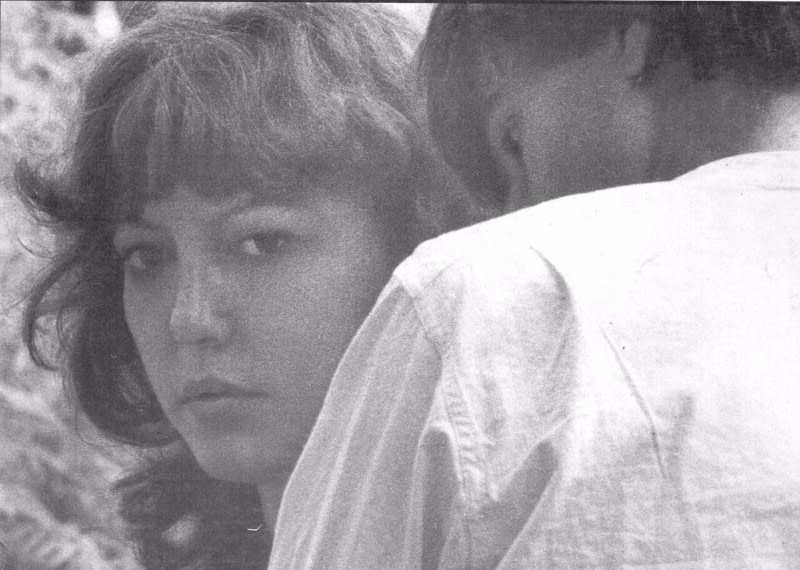 The Double Life of Juliette Binoche